Mother’s fury after Tesco cashier refuses to sell her rosé

A furious mother has slammed Tesco after the supermarket refused to serve her alcohol because she was with her 17-year-old daughter.

Catherine O’Callaghan, 47, claimed the cashier waited until she had unloaded all of her shopping at the checkout before asking if her daughter Niamh had ID.

She explained to the worker in Halifax, West Yorkshire, that her daughter did not have any identification and that it was not her shopping.

Mrs O’Callaghan was left so enraged because she was not able to buy the bottle of rosé that she abandoned her shopping. 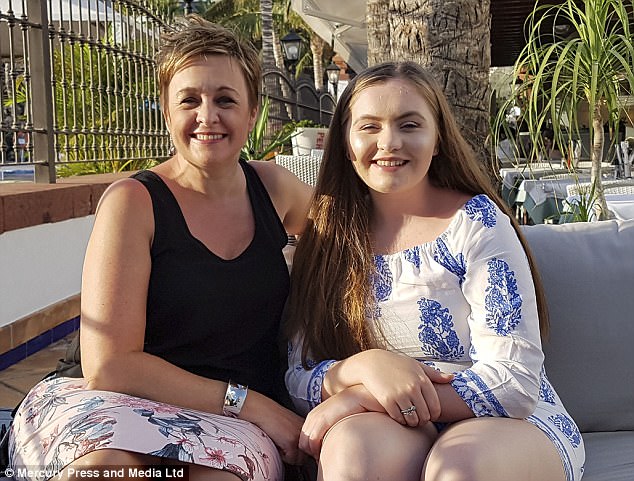 The ’embarrassed’ mother complained to customer services where she was allegedly told it was the cashier’s ‘first day’, but that it was ‘company policy’ to ask for ID if people appeared under 25.

Tesco has now apologised for being ‘overzealous’ on October 20.

She was so unhappy with the outcome that she went to Morrison’s the next day to finish her shop – and has slammed Tesco over their ‘silly’ decision.

Tesco has since admitted it was not their intention to ’cause offence’ and were sorry if their approach was ‘overzealous’, but maintained their reasons were in line with the Think 25 policy.

Mrs O’Callaghan, from Halifax, said: ‘I felt so embarrassed. I just left my shopping on the till and took my four bags for life with me.

‘It’s political correctness gone mad. That bottle of rosé was nearly the last item to be scanned and I had to abandon the whole shop.

‘So, what are they saying, I can’t buy alcohol just because I’m with a 17-year-old? It just doesn’t make sense to ban parents just because they’re with a child.

‘If that rule is to be taken seriously then it would affect how I shop because I wouldn’t be able to bring my children if I wanted to get wine – it’s so silly.’

She said she complained to customer services, who suggested she return and pay for her shop in the first instance.

She then claims Tesco called her the following day to offer an apology but says it was ‘not good enough’ and wanted a complimentary bottle of wine in compensation. 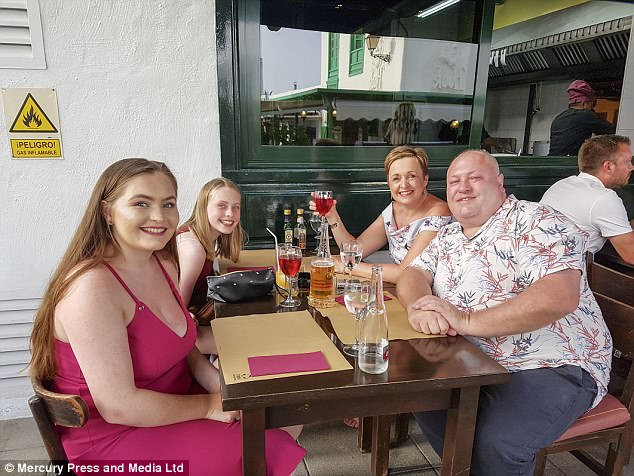 Mrs O’Callaghan (pictured with her husband Dennis and two daughters Ruby-Jo, 12, and Niamh then left the shop

Mrs O’Callaghan added: ‘Everything was going fine. We were putting all the items through and my daughter was chatting with the cashier about her A-Levels and things.

‘After the whole thing I complained to the assistant manager who asked me if she was ‘new’.

‘But then she just said ‘well it’s policy to refuse to serve if they think that the alcohol is meant for someone else.’

‘I just think it’s totally unfair. The checkout girl could have at least asked for a manager and used a bit of common sense.

‘They offered me an apology but it just wasn’t good enough. I had to do my shop the following day in Morrisons.

‘I think they should change the rules. Otherwise as parents we would never be able to buy alcohol with our children there. 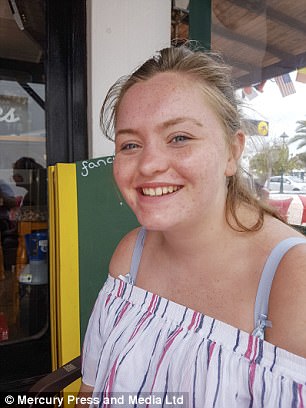 Mrs O’Callaghan explained her daughter Niamh did not have ID

‘If my daughter was ‘dressed up’ and I was getting alcopops I’d understand it, but it was a bottle of rosé with a full shop.

‘What next? Are parents who get medications with their children now going to be refused?’

Her husband Denis was equally upset and has called on the company to change its policy.

He said: ‘It’s very frustrating isn’t it? My wife had had a long week of work and she wanted a bottle of wine. In the end she went to Morrisons for the shop instead.

‘I just don’t think it’s really an ‘apology’ at all. I think Tesco should change its policy because the whole thing is just ridiculous.

‘It’s utterly stupid. My wife was left feeling embarrassed. I think there needs to be a more pragmatic approach and there should be more discretion.

‘You shouldn’t have to ‘hide your child away’ if you want to buy alcohol.’

A Tesco spokesperson said: ‘We take our responsibilities as a retailer of alcohol very seriously, so we have a strict Think 25 policy.

‘Customers may be asked for ID if our colleagues believe there is a chance that a product may be consumed by someone who is under the legal age.

‘It is never our intention to cause offence and we’re sorry if we were a little overzealous on this occasion.’