Mothers say they were deceived about epilepsy pills risks

Thousands of angry mothers believe they were deceived about the risks of taking scandal-hit epilepsy pills during pregnancy.

Nearly 20,000 babies have been born with disabilities since sodium valproate was introduced in the 1970s, figures show.

The drug can cause severe birth defects, including spina bifida, where the spinal cord doesn’t form correctly, and heart and genital defects.

Sodium valproate is only recommend during pregnancy if there is no better option to control symptoms of their epileptic seizures.

But scores of women say they weren’t warned of the extent of the risk. They are now set to provide evidence to a European drug regulator.

Julie Marjot, from Norfolk, told the BBC doctors waited until her last child was born to reveal the controversial pills harmed three of her four children.

She said: ‘As time went by and we had more children, we saw more paediatricians, we saw GPs, we saw midwives, we saw all of these healthcare professionals.

Julie Marjot, from Norfolk, said doctors waited until her last child was born to reveal the controversial pills harmed three of her four children

‘Why did it take for me to have four children before somebody finally said, ‘That child looks like it has got sodium valproate syndrome?”‘

Her two daughters, 21 and seven, and 11-year-old son have all been affected, it was reported.

Concerns were initially raised about the drug in the 1980s, but evidence filtered through consistently in the years afterwards. 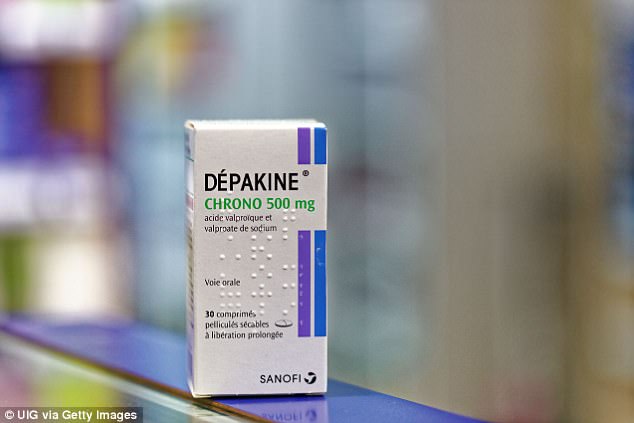 Nearly 20,000 babies have been born with disabilities since sodium valproate was introduced in the 1970s, figures show (sold as Dépakine in Europe)

In 2013, researchers estimated that around 48,000 children had been born to mothers who had taken the drug since it was introduced in 1973.

Of these, the scientists said 19,200, or 40 per cent, developed physical or mental problems.

They also predicted that 800 new babies would be affected by similar disabilities each year.

The number of those affected is much greater than that of thalidomide – often dubbed the biggest medical scandal.

It was given to combat morning sickness between 1958 and 1961 – but doctors soon noticed a link to babies being born with deformities. Reports suggest around 10,000 children were affected.

After a long battle, the families affected received total of £28 million in compensation, paid out by manufacturer Diageo during the 1970s.

Twelve years ago, health officials addressed some of the worrying risks on patient information leaflets.

Following more evidence in the past decade, warnings were then added to the outside of pill packets in Britain last year.

Around 1,200 French families are seeking legal action against Sanofi – the manufacturer of the drug. They accuse it of not sufficiently informing women of the risks. The Government has put aside £9m (€10m) in compensation.

Similar proceedings were abandoned in England and Wales seven years when their legal aid was withdrawn. They signed letters promising to never sue again – in return for not being billed for the drug giant’s seven-figure legal costs.

‘Sodium valproate is an important molecule that epileptic women continue to rely on, even today, to control seizures, to avoid a potentially fatal seizure during their lifetime, including during pregnancy.’

What did the regulators say?

A spokesperson for the MHRA said: ‘It is important women don’t stop taking valproate without first discussing it with their doctor.

‘The decision to use any medicine in pregnancy requires a careful evaluation of the benefits and risks to both the woman and to her unborn child.

‘When considering the known risks of valproate, it is important to remember that untreated epilepsy and bipolar disorder can also carry serious risks.

‘As with all medicines, the safety of valproate in pregnancy has been kept under constant review, and as new data have become available, the warnings have been updated.’

The European Medicines Agency will decide whether the warnings are strong enough in the coming weeks.