A mother claims a delivery driver drew a cartoon penis on her package and then mocked her when she text him to complain about what he did.

The shocked woman – who wishes to remain anonymous – was shocked to discover her parcel from House of Fraser had been defaced.

She then texted the delivery man from Fastways – a sub-contractor for Yodel – to ask why and received a number of bizarre emoji-laced messages back. 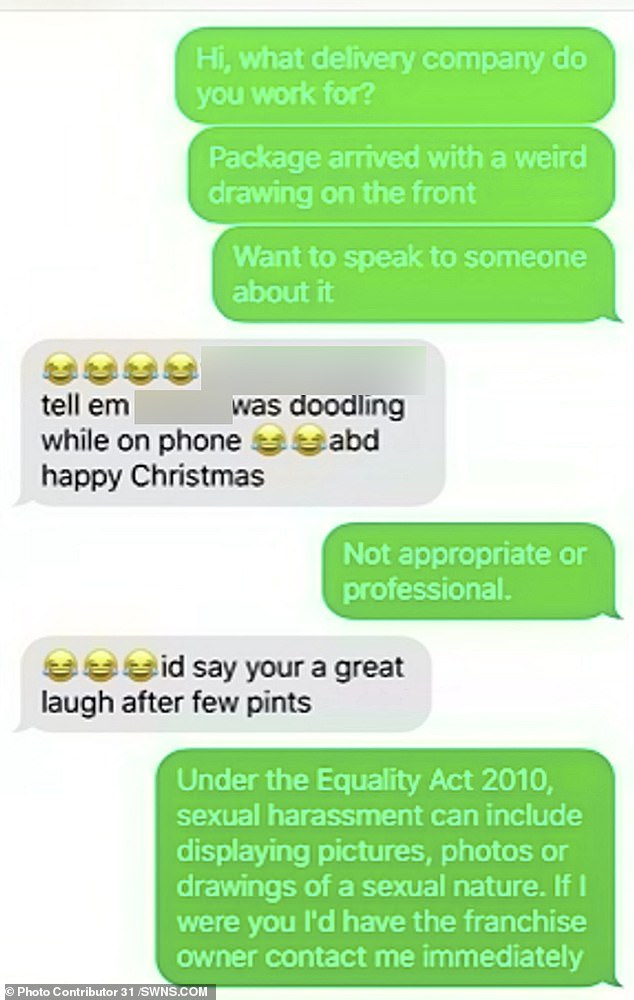 The message exchange between a woman from Coventry, and the delivery driver

The 33-year-old said: ‘I think the behaviour of the driver was unprofessional and inappropriate from start to finish.

‘His reaction was creepy. It was like he found the thought of shocking myself or someone else with such horrible drawings was entertainment.

‘Would it be appropriate for someone in a restaurant to draw penises on your bill at the end of a meal? No, it would not be.

‘Therefore why should it be acceptable for a courier service to deliver a package, with inappropriate drawings on it?’

The woman, of Coventry, ordered an aftershave set from House Of Fraser for her elder brother for his birthday on December 12.

She received a phone call from the driver shortly before 11.30am on Wednesday December 19 asking her to confirm the directions to her parent’s house.

She said: ‘As my phone reception was patchy, I text him the directions instead.

‘I replied: ‘Haha I suppose that is the point of having a big dog.’

‘(He responded with a ‘laughing’ emoji.’

However, her mother later alerted her after spotting a weird doodle on the package several hours later.

The woman said: ‘I was left extremely shocked as to what I saw so I contacted the driver straight away.’

In a text message sent to the driver, she said: ‘Hi, what delivery company do you work for?

‘Package arrived with a weird drawing on the front. I want to speak to someone about it.’

The woman responded: ‘Not appropriate or professional’

The driver responded: ‘(laughing emoji x 3) id say your a great laugh after a few pints’

The woman responded: ‘Under the Equality Act 2010, Sexual Harassment can include displaying pictures, photos or drawings of a sexual nature.

‘If I were you, I would have the franchise owner contact me immediately.’

The woman has since tried to contact Fastways, House of Fraser and Yodel without success.