TREE-sy rider! Motorbike made from a huge LOG carries seven people and a FRIDGE along a highway in China

This bizarre footage shows a motorbike made out of a huge log carrying seven people and a fridge.

Driving through the sprawling city of Chongqing, China, the Instagram page Shanghai Observed shared the footage as the filmer travelled past the bizarre vehicle.

With six men and one woman clinging on to the wooden chassis, the bike’s front and rear wheels keep chugging along.

The bizarre scene was captured as bike was driving through the city of Chongqing, China

Passing the unusual automobile, a big white fridge is also recorded perched behind the last passenger on the bike.

A man’s voice is heard shouting to the group and they react by stopping the strange contraption by dragging their feet on the ground.

A loose translation of the dialect means that the man is shouting ‘what are you doing?’ while recording the group. 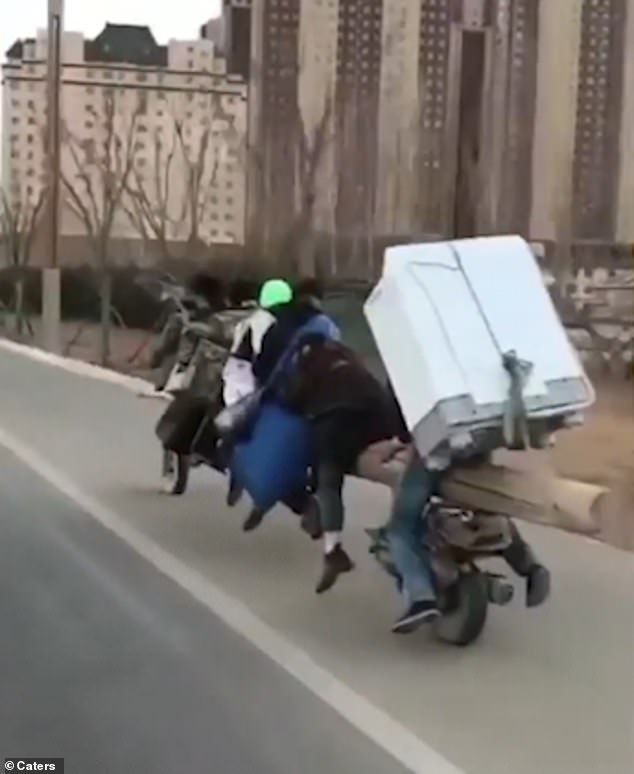 One of the smiling bikers responds: ‘We’re going to the streets!’

One of the man appears to be carrying a shovel while the others cling on to several bags.

Chongqing is a sprawling municipality near the joining point of the Yangtze and Jialing rivers in southwestern China.

With a population of around 30 million people, conventional bikes and motorbikes are a common mode of transport.