Shocking footage has emerged of a roadside brawl involving a motorcyclist, a ute driver and a metal pole in Melbourne.

A local homeowner’s CCTV captured the incident on Mickleham road, Tullamarine, close to Melbourne airport, at around 8pm on Monday evening.

The footage shows a white ute pull off the main road, followed by a man on black motorbike who dismounts.

The homeowner, a man called Jan, told 3AW radio station he was ‘staggered’ when he looked back at the material.

A man was seen getting out of the white ute, wielding a thick metal pole and walking towards the motorcyclist.

The men appear to be arguing and within a few seconds, the motorcyclist has grabbed the metal pole from his opponent and started swinging it ferociously at his legs.

Eventually, the motorcyclist throws the weapon aside and moves to get back on his vehicle, but the ute driver then picks up the metal pole.

A local homeowner’s CCTV captured the incident on Mickleham road, Tullamarine, close to Melbourne airport, at around 8pm on Monday, which involved two men and a metal pole 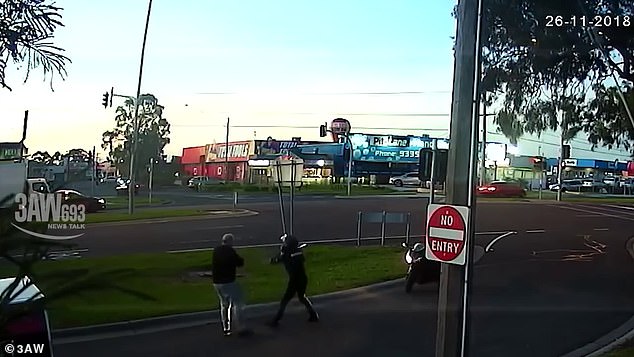 After grabbing the metal pole from the ute driver, the motorcyclist ferociously swings it at him

The two men are seen shoving each other and the ute driver makes several attempts to swing at the motorcyclist.

Further conflict ensues but the view is obstructed by a street light and a few moments later the motorcyclist drives away.

Jan told 3AW’s Neil Mitchell his wife was home during the incident and she heard ‘a lot of screaming and shouting’.

‘You don’t expect anyone to be driving around with a 2×4 metal bar in easy reach in a van,’ he said. 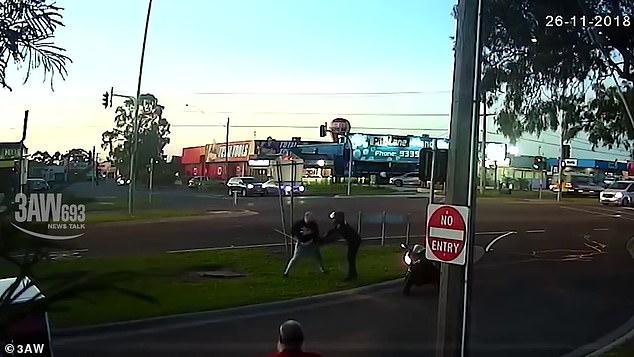 Later, the ute driver regains possession of the metal pole and swings it at the motorcyclist

‘It’s staggering that could actually happen.’

It does not appear that anyone was hurt in the incident.

Victoria Police told Daily Mail Australia they are aware of the incident but are still confirming full details.