A motorist has been killed after his car collided with a lorry during a Yellow Vest riot in France, marking the tenth death linked to the protests since they began last month.

The 36-year-old man, who has not been identified publicly, died following the collision at a road block erected by protesters in Perpignan last night, in the south of the country.

Although it is understood that the victim was driving the car, there have been conflicting reports suggesting that he was stood with the demonstrators at a roundabout at the time of the crash.

A local police spokesman said: ‘The victim was with a group of demonstrators when the accident happened just before midnight on Friday. An enquiry has been launched.’

A driver has been killed after a car collided with a lorry during a Yellow Vest riot in France , marking the tenth death since the protests began last month

Violence erupted in Paris today as anti-government protesters took to the streets for the sixth Saturday in a row.

Most were so-called Yellow Vest fuel price demonstrators, who are named after the high visibility jackets they wear.

The Vests have been protesting since November 17 and, despite a range of concessions by President Emmanuel Macron including scrapping green taxes of diesel and petrol, continue to call for him to step down.

‘Macron Resign’, a crowd shouted today as they gathered at Montmartre, the tourist district overlooking Paris first thing this morning. 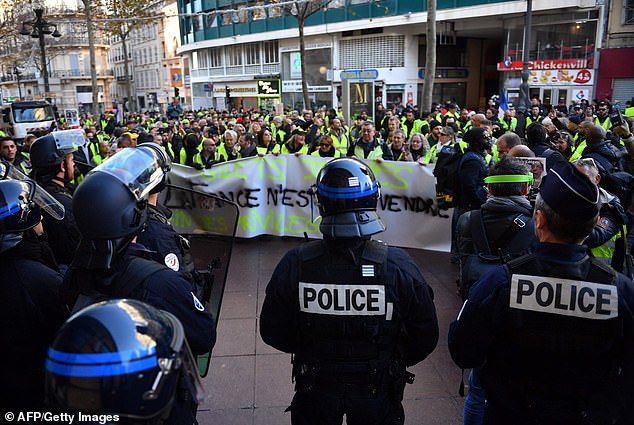 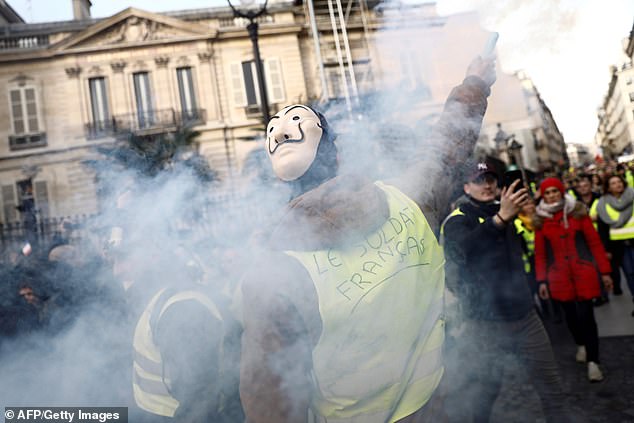 There had been claimed that they would gather at the ancient palace of Versailles, to the west of the capital, but this turned out to be a diversion.

‘Our protests have been hugely successful in Paris itself, and that’s why we’re back here,’ said Jean Caron, a 52-year-old from Brittany.

‘What everybody now realises is that the government cannot control us, and that’s why we will continue until Macron resigns.’ 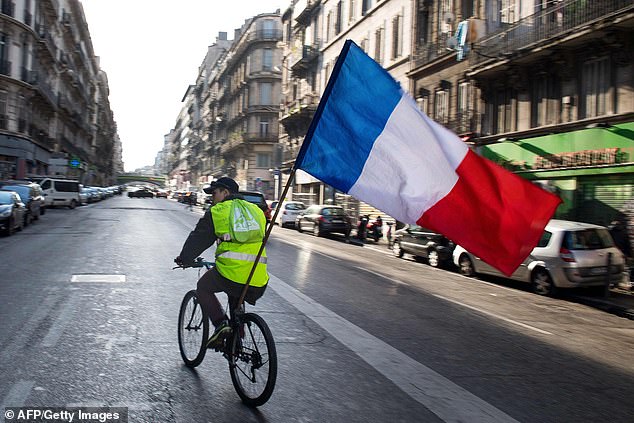 A protestor wearing a Yellow Vest (Gilet Jaune) rides a bicycle with a French flag in Marseille, southern France

Despite such strong views, numbers were down on earlier demonstrations, with around 600 taking part in a march from Montmartre into the city.

Last Saturday there were almost 170 arrests for public order offences across the city, while last month some 700 were held in custody on a single day.

‘The situation is tense, and we are monitoring the crowds constantly,’ said a Paris police spokesman said today, adding that there had been no arrests by lunchtime. 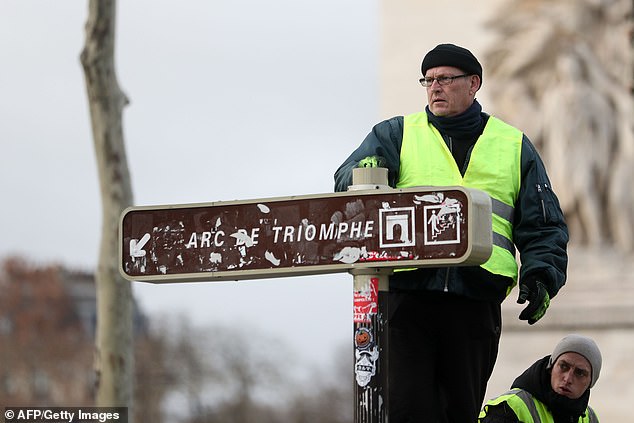 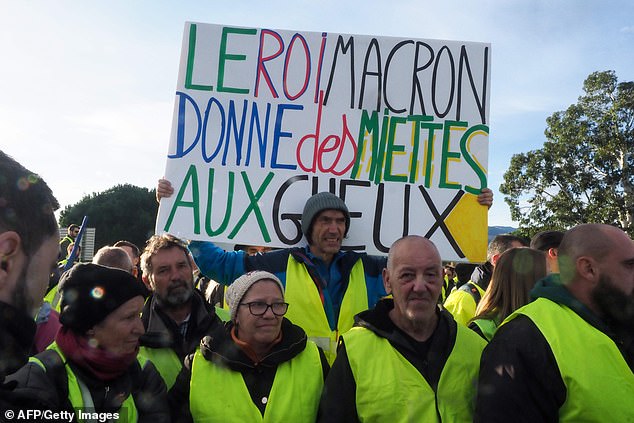 High-end shops including luxury fashion boutiques were all boarded up, along with banks and post offices.

Mounted police, water cannons, and 14 armoured vehicles capable of spreading high-intensity gas were all on standby as part of the security operation.

They have failed to prevent widespread disorder over the past few weekends, with the worst violence normally coming at nightfall. 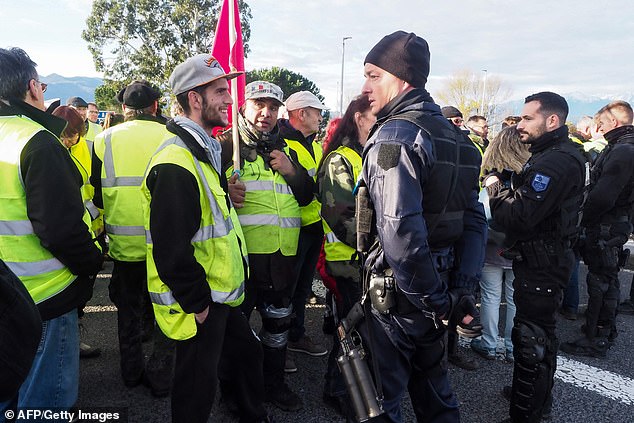 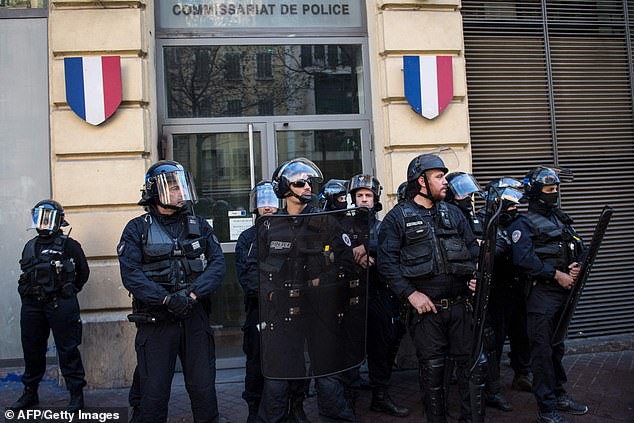 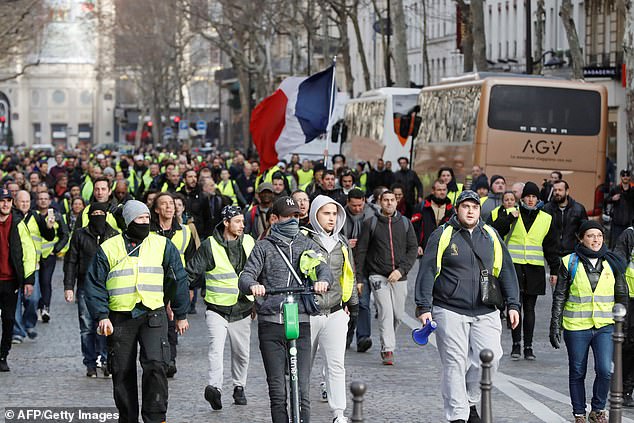 Yellow Vest protestors walk in Paris, on December 22, 2018, as demonstrations are planned in several regions of France

The Vests have been joined by extremists from the far Right and the ultra-Left, as well as anarchists intent on causing as much damage as possible.

Crisis-ridden Mr Macron has not only climbed down on imposing green surcharges, but increased the national minimum wage by seven per sent, and scrapped tax on bonuses.

But the Yellow Vests said their protests would continue indefinitely as they campaign for even more concessions.

The independent Mr Macron, leader of the Republic On The Move party, won the French presidential election in a landslide in 2017, but he is now dubbed the ‘President of the Rich’ with polls showing his popularity rating down to just 18 per cent.