Motorist convicted of filming aftermath of crash is CLEARED

A rubbernecking builder who filmed the aftermath of a road crash as he drove past has today been cleared by judges in a case exposing a loophole in the law on using a phone behind the wheel.

Ramsey Barreto, 51, was stopped by police after he was seen gathering footage as he passed the scene of a serious accident in Ruislip, west London, in August 2017.

The builder was charged with breaches of rules relating to mobile phone use while driving and convicted by magistrates in July the following year.

But his conviction was overturned at Isleworth Crown Court in October 2018 when a judge said the regulations do not ban use of a phone to shoot video while driving.

The case went to the High Court and today two of the country’s top judges upheld the crown court decision, clearing Mr Barreto, of Ruislip, of the offence.

‘The legislation does not prohibit all use of a mobile phone held while driving,’ said Lady Justice Thirlwall, who heard the case with Mr Justice Goss.

‘It prohibits driving while using a mobile phone or other device for calls and other interactive communication – and holding it at some stage during that process.’

Mr Barreto had been charged under road safety regulations dating back to 1986, which were revised in December 2003 to take account of the mobile phone hazard. 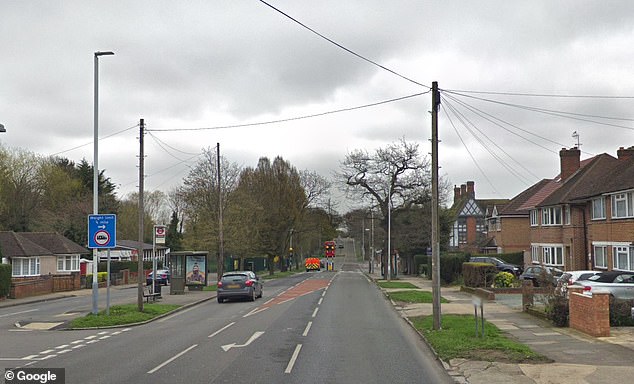 The 2003 rules bar drivers from using hand-held phones, but Mr Barreto’s lawyers successfully claimed the restriction is aimed only at ‘performing an interactive communication function’.

That would prevent all talking, texting and internet usage on the handset while driving – but not using a phone as a camera.

What is the law on driving while using a mobile phone?

Using a hand-held mobile phone while driving is illegal. Laws were first enacted in December 2003.

Driver are allowed to use a phone if it is fully hands-free, but not allowed to pick it up.

The law still applies when your vehicle is stopped at lights or in a traffic queue.

The current case centred on whether using a phone to film, rather than communicate with someone, should be treated as driving without due care and attention rather than driving while using a hand-held phone.

And judges agreed there is a loophole related to filming with a phone’s camera.

Lady Justice Thirlwall – ruling on an appeal against Mr Barreto’s acquittal by the Director of Public Prosecutions – said that in 2003 the concern had been about people making or taking calls while driving.

At that time, most mobile phones had games functions, but there was no concern of people playing games while driving, she said.

However, 16 years later, mobile phones have advanced to include cameras and web-based applications, she added.

Louis Mably QC, for the DPP, argued that the purpose of the rules is to ‘guard against unsafe driving caused by drivers holding their phones and using them’.

‘There is no rational distinction to be drawn between a mobile telephone used by a driver to perform an interactive communication function on the one hand, and use by a driver for a different equally distracting purpose on the other,’ he added.

But Mr Barreto’s barrister, Jyoti Wood, argued that the rules only relate to use of a phone for ‘interactive communication,’ including calls, texting and web use.

Dismissing the DPP’s appeal, Lady Justice Thirlwall said the regulations were ‘cumbersome’, but that the effect is ‘clear’ – only using a phone for communication is banned.

‘I do not accept Mr Mably’s submission that this interpretation is incoherent,’ she continued.

‘On the contrary, it coincides with and reflects the purpose of the legislation.’

She added: ‘I am satisfied that the crown court was right to quash the conviction.’

However, the judge said that, while filming is not banned under the mobile phone regulations, it might constitute another crime.

‘It should not be thought that this is a green light for people to make films as they drive,’ she said.

‘Driving while filming events or taking photographs whether with a separate camera or with the camera on a phone, may be cogent evidence of careless driving, and possibly of dangerous driving.

‘It is criminal conduct which may be prosecuted and on conviction may result in the imposition of penalties significantly more serious than those which flow from breach of the regulations.

‘The same applies to any other use of the phone while driving.’