‘I hate this unless it’s me doing it’: Motorists are divided over footage showing a driver beating a massive queue of traffic by overtaking and cutting in

Motorists are divided over footage showing a driver skipping a two-kilometre queue by overtaking and cutting in.

The driver cuts past traffic on the Pennant Hills road exit along the M2 motorway in Carlingford, in NSW, posting the video to the Humans of Bankstown Facebook page on Tuesday.

The driver can be heard speaking over the footage, encouraging others to ‘just push in’ as he drove past the massive line.

‘Look at these idiots queuing up in the left lane for two kilometres before the exit,’ the driver said in the video as he drove past.

‘Your attitude is appalling, what makes you so special that everyone must bow down to you?’ a woman said.

‘That’s why the line is that long from fleas like this constantly pushing in front. Good one you selfish grub,’ one man said.

Other drivers said they also cut past traffic but hate when it is done to them.

Many did not think the driver had done anything wrong.

While the driver’s manoeuvre angered many, police said it was legal because he crossed broken lines.

‘As long as they merged safely there is no police offence,’ a NSW Police spokeswoman said.

‘Broken white dividing lines may be crossed to overtake if the road ahead is clear,’ the NSW Road and Maritime Services website said.

Drivers pointed out the man who recorded the video may have been using his phone while driving.

Illegal use of mobile phone has a 10 demerit point penalty and a $337 fine in New South Wales due to double demerits until midnight on Monday, April 29.

It carries six demerit point penalty in the Australian Capital Territory, which also has double demerits in effect until April 29. 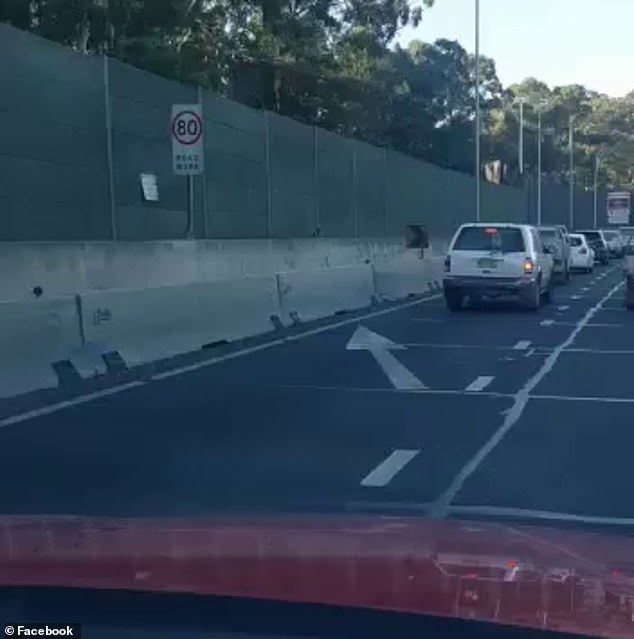 ‘As long as they merged safely there is no police offence,’ a NSW Police spokeswoman said