This is the distressing moment a woman who witnessed a vehicle burst into flames in Florida repeatedly alerted the driver about the dangerous matter.

The woman driving a white 2012 Kia Sorento that caught fire, Susan King, said Meridith Olinger, who was driving nearby on Interstate 4 in Orlando, saved her life on Friday.

‘I’m incredibly grateful… she was my angel that day. It was surreal, King said in a statement to WESH.

Shocking video taken by Olinger in her car shows flames bursting from underneath the SUV. 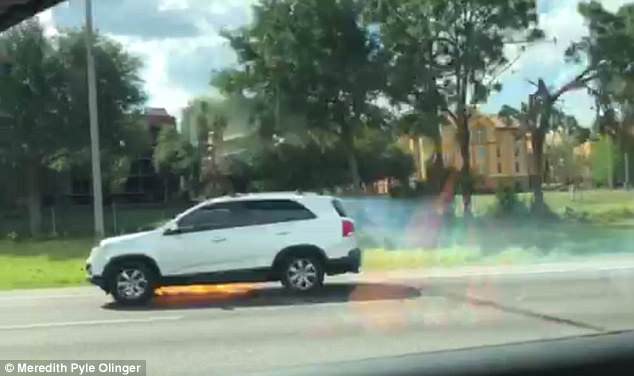 A woman driving a white 2012 Kia Sorento that caught fire, Susan King, said Meridith Olinger, who was driving nearby on Interstate 4 in Orlando, saved her life on Friday when she repeatedly warned her about the incident

‘You’ve got to pull over… you’ve got to get over!’ Olinger is heard yelling out in her car, while attempting to motion to King.

Olinger goes on: ‘Get over! Get over!’ before King is seen finally pulling off to the side of the road.

‘Get away! Get away from it!’ Olinger tells the woman, who is standing next to the vehicle.

According to the news station, King had been driver the SUV that belonged to her friend, Tyla Kennedy. Shortly after King pulled over, rhe vehicle was totaled. She was not injured. The Kia, that belonged to King’s friend, reportedly had engine defect and was under a safety recall

Kennedy later discovered the KIA had an engine defect and was under a safety recall.

She told the news station: ‘What would be nice is a car to replace my vehicle that burnt while my best friend was driving it and nearly killed her.’

The friend added: ‘There is no compensation until I can prove that it was the recall that blew up the engine.’

The vehicle was totaled shortly after King pulled over. She was not injured.