Motorists get raw deal at pumps despite cheaper oil prices

By Connor Stringer For The Daily Mail

Drivers of petrol vehicles are getting a ‘raw deal’ at the pumps despite falling oil prices, the RAC warned yesterday.

It said that even though average forecourt prices sank to 169.8p a litre at the end of August, current wholesale costs mean they should be around 161p.

The 12.3p drop in average prices during August was the largest monthly fall since records began 22 years ago. But the RAC said it was not enough.

However, the average price of diesel at the end of August was 183.7p, which the motoring group described as a ‘fairer reflection of wholesale costs’.

The 12.3p drop in average prices during August was the largest monthly fall since records began 22 years ago. But the RAC said it was not enough

Spokesman Rod Dennis added: ‘Twelve pence a litre is a lot to come off prices in a single month, so there’s no doubt things could be worse.

‘But in reality, drivers of petrol vehicles are still invariably getting a raw deal at the pumps.

Major retailers are choosing not to pass on in full the reductions in the wholesale price of unleaded they’ve been benefiting from for some considerable time.

‘There is a very strong case for the biggest sellers of fuel to cut their forecourt petrol prices further.

‘Allowing for a generous 10p-a-litre margin, we should be seeing petrol sold for around 161p a litre. Some big supermarket sites aren’t too far off this – but there’s a real postcode lottery, with prices varying wildly. Drivers must shop around for the best deal.’

A review by the Competition and Markets Authority found that the growing cost of oil refining was one of the main causes of soaring fuel prices this year. It said this figure had more than tripled in 12 months to nearly 35p a litre. The RAC fears that could soon rise again if Opec, the organisation representing many of the biggest oil producing nations, cuts production when it meets next week.

The pound also had its worst performance against the US dollar last month since October 2016, with £1 worth just $1.16 by August 31. With oil traded in dollars, this makes it more expensive for Britain to buy oil.

Analysis by the RAC in August also revealed that the British Government was one of the least generous when it came to helping drivers cope with high petrol and diesel prices.

For example, France increased its discount on fuel on September 1, pushing pump prices below £1.50 a litre across the country.

Mr Dennis urged the incoming prime minister to cut fuel duty, adding: ‘Fuel can make up a huge chunk of a household’s monthly expenditure. With many people dependent on the car, drivers need all the help they can get.’

Is an electric car still cheaper? 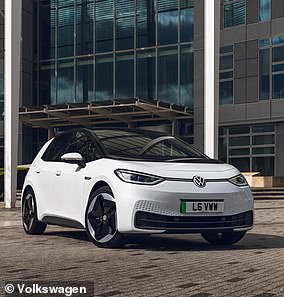 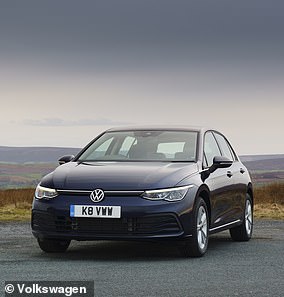 For comparative purposes, we have calculated the difference in annual home charging costs for an electric Volkswagen ID.3 (left) and yearly fuel bills for a petrol Volkswagen Golf hatchback (right)

While they may be more expensive to buy new or second hand, electric cars have held a substantial cost saving advantage over petrol-powered vehicles when it comes to running costs.

Even allowing for range figures that are optimistic in the real world, electric car owners have benefitted from a much lower per mile cost when you compare the cost of charging to filling up at a petrol station.

But the energy price spike has narrowed the gap and news that Ofgem will increase the energy price cap from 1 October, from £1,971 to £3,549, for the average household will hit electric vehicle owners.

But by how much have things changed when it comes to the difference between charging and filling up?

We’ve crunched the numbers and while it could be bad news for EV owners without charging facilities at home, for those able to charge at home even on a price cap standard tariff it remains cheaper: at 11.6p per mile when the energy price cap is hiked in a month’s time for a VW ID.3 compared to 15.5p per mile for a 1.5 litre petrol VW Golf.

Find out more in our comprehensive guide:  Is it cheaper to run an electric car than a petrol with energy prices rising?