A father-of-two, who weighs 21-stone, managed to keep smiling despite being pulled from chest-deep mud by mountain rescuers after he got stuck when he went in to help his fiancée and dog.

Shaun Taylor, 64, was on the cusp of hypothermia after he was swallowed by five foot deep mud at the Peak District’s Ladybower Reservoir, Derbyshire.

The pharmacy worker sunk when he went to rescue his fiancée Julie Taylor, 57, whose feet became stuck after she went in after their cocker spaniel Charlie.

But despite his dog and partner getting free, Mr Taylor stumbled backwards into a sinking ‘mud hole’ – and then slipped deeper until it was up to his chest.

Shaun Taylor, 64, managed to keep smiling as he was pulled from the five foot deep mud at the Peak District’s Ladybower Reservoir, in Derbyshire with the help of two strangers, park rangers and Edale Mountain Rescue 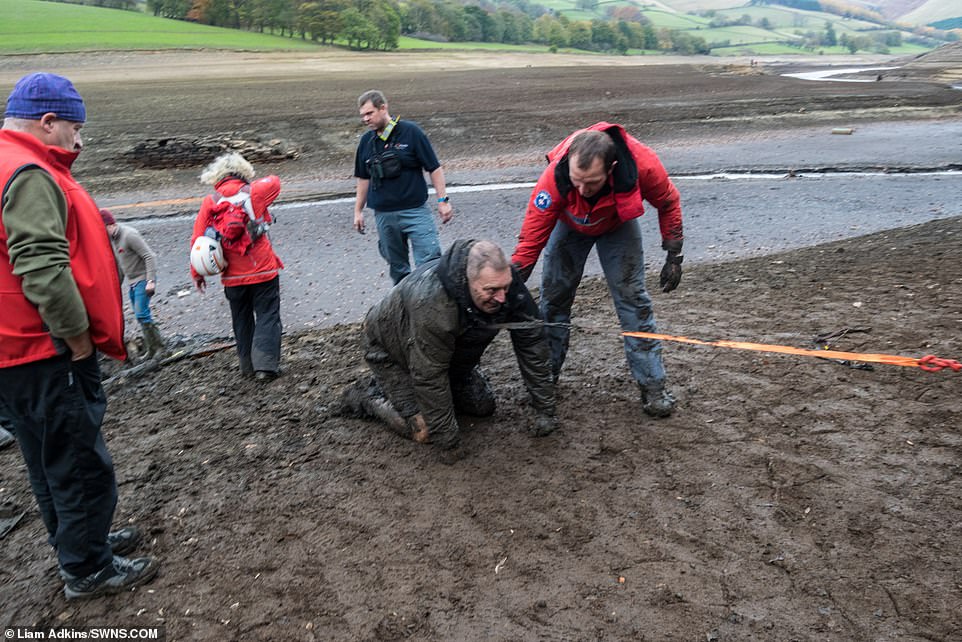 Walkers and local rangers tried to help Mr Taylor, and after an hour Edale Mountain Rescue arrived to the scene, pulling the dad out the mud.

He said: ‘I’m the type of person that, if I’m quite distressed, I start laughing and joking.

‘I didn’t want to upset Julie who was already quite worried but I was pretty terrified.

‘When we realised we didn’t have any signal on our phones that’s when we were banking on a stranger walking by. Luckily there were two of them.

‘Charlie wouldn’t leave my side – he must have sensed something wasn’t right.

‘By time the emergency workers came started to get dark and I could feel the hypothermia setting in.

‘I was completely lodged in. When one of the rescue workers started using a spade to help dig me out I could feel it but couldn’t do anything about it. 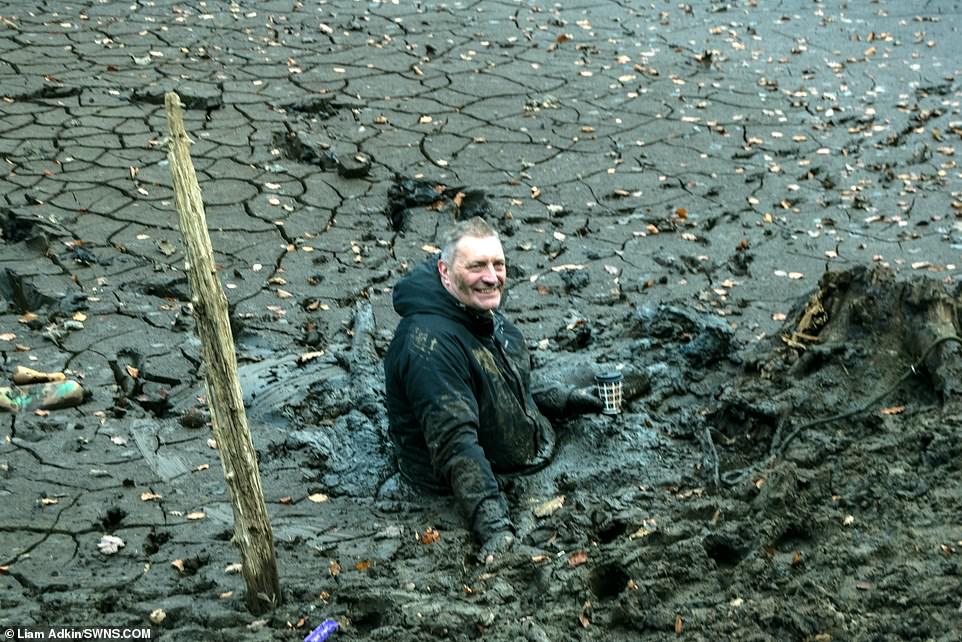 Mr Taylor’s fiancée ran to the rangers station, a 45 minute walk away, for help after two strangers stopped to assist the couple. She said: ‘When I left him the mud was up to his thighs. When I returned an hour later he was waist deep’ 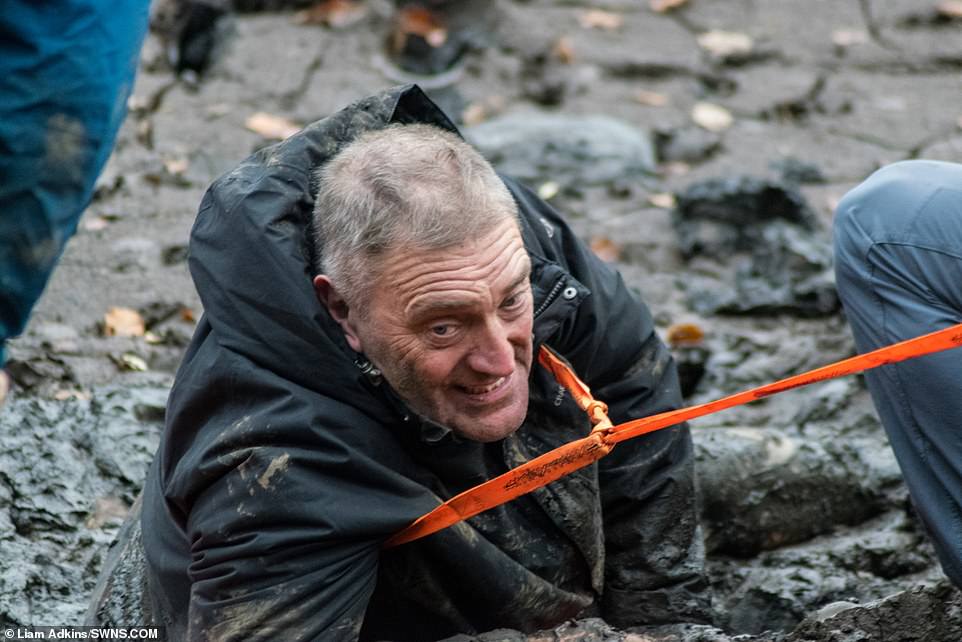 Mr Taylor, who works at a pharmacy, said he is still ‘completely bruised’ even three weeks later after from being pulled out of the mud and has warned over walkers to ‘watch where they step’

‘I’m still completely bruised by it.

‘When I was pulled out I remember my legs shaking but this incredible burst of adrenaline.

‘I was aching for days – and I still am almost three weeks on. I’m incredibly thankful for my rescuers. We even made a donation to the volunteers just to say a big thanks.

‘I would just tell other visitors to watch where they step. I wouldn’t recommend it to anyone.’

The accident happened when Julie ran over ‘the mosaic looking mud’ after seven-month-old cocker spaniel Charlie.

Mr Taylor rushed to help his partner of 13 years out of the mud but after pulling her left leg out, stumbled backwards into a sinking mud hole.

Neither of the pair had signal on their mobile phones, but ten minutes later two strangers spotted the couple and ran over to help.

The two men helped Mr Taylor while Julie ran to the rangers station, a 45 minute walk away, for help.

The couple, from Sheffield, have thanked rescue workers for their help and are warning others to be vigilant. 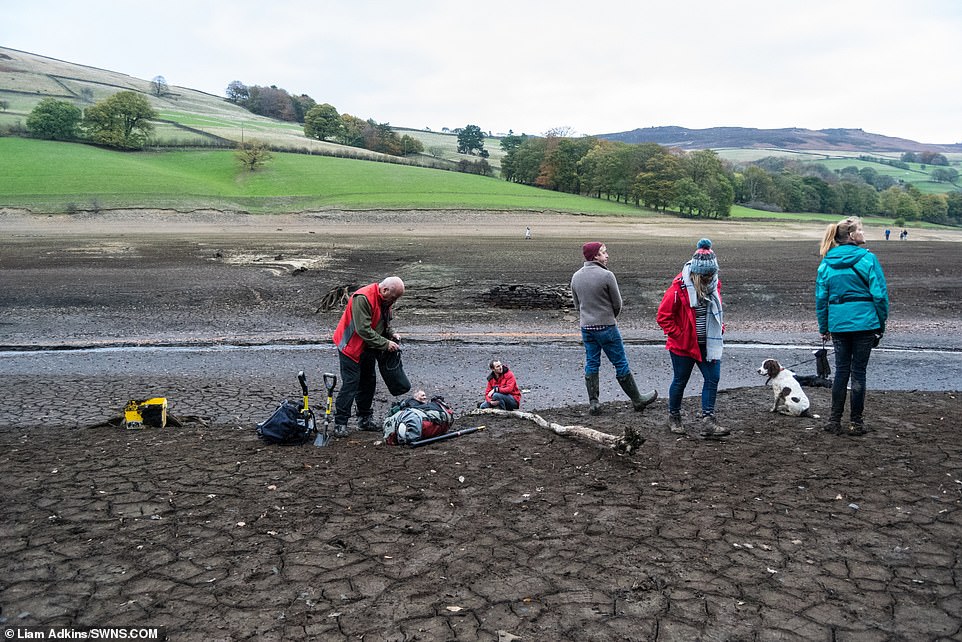 Julie said: ‘We’re regular visitors, we often go there two or three times a month so it’s not as if we don’t know the area.

‘I took Charlie off of the lead while we were walking but an hour in he started to wander. I didn’t give it a second thought.

‘The mud looked like a floor of mosaics so I just went off after him.

‘I chased after him so I could put him back on the lead but before I knew it I felt my leg plunge into some mud. Before I knew it, it was up to my thighs.

‘I was worried I wouldn’t make it out so I threw Shaun my mobile phone.

‘He came rushing over but in playing the hero Shaun ended up walking backwards and sinking within seconds.

‘I knew I couldn’t help get him out in the same way so there was nothing I could do.

‘But I didn’t want to leave him as I could see he was sinking. Say if I went away he could

‘Luckily after ten minutes these two men had spotted us and were incredibly eager to help.

‘When I left him the mud was up to his thighs. He’s also a diabetic which made me even more worried. When I returned an hour later he was waist deep.’ 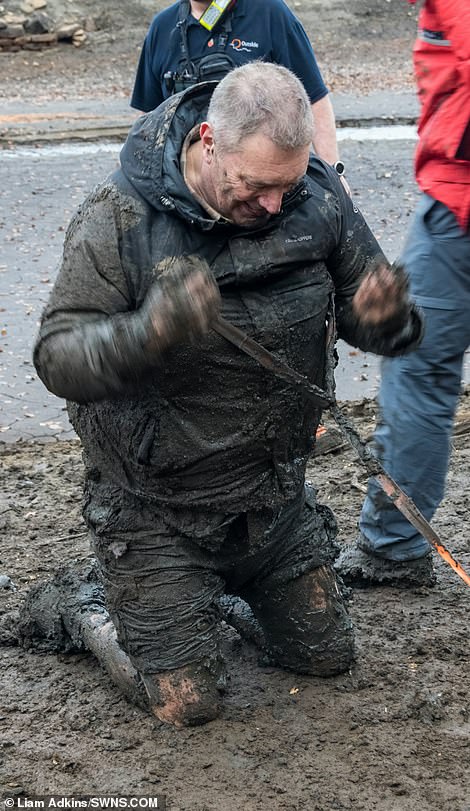 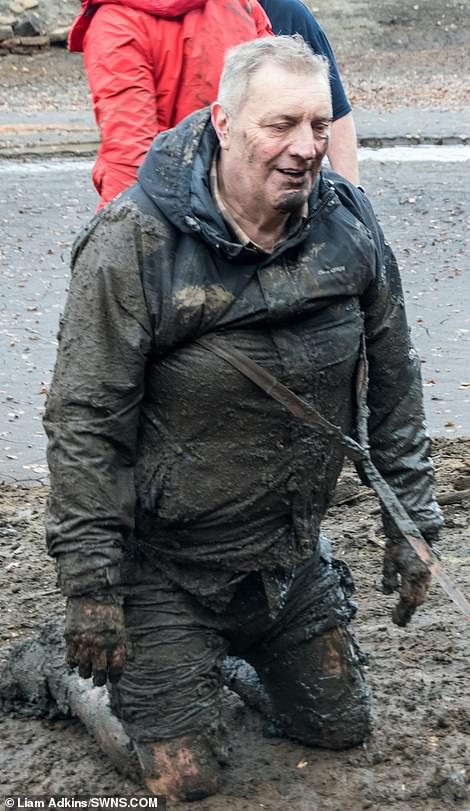 Liam Adkins, 32, one of the walkers who helped Mr Taylor, said: ‘When I first clocked eyes on Shaun I just thought ‘Oh my god’.

‘He was completely wedged in. He seemed in good spirits but at times he did look pretty terrified.

‘He could hardly walk when he was pulled out. He was shaking all over. I’m just glad he was alright and we were able to help.’

The rare sight of the ‘exposed village’ has attracted many people to the reservoir, which has lead rescue workers to issue warnings.

A spokesman for Edale Mountain Rescue Team said: ‘We were called to an incident on 3 November.

‘The team was able to access the casualty with a variety of specialist equipment designed to spread an individual’s weight over a muddy surface.

‘We’ve had over 100 incidents this year and while we do welcome people to admire the sights we do ask visitors to pay heed to the warnings.

‘Some of the surface looks like ‘rice pudding with skin on’ and may look solid it’s not.

‘We invite visitors to come and see the ruins but advise them stick to the shore.’