The son and heir of Earl Mountbatten of Burma wed Ambre Pouzet — who was once a ‘mer-lesque’ artiste, or performing mermaid, under the surname Saint-Clare — after a two-and-a-half-year engagement.

They married at his family’s stately home, Broadlands, in a civil ceremony conducted by a registrar on May 20, 2021, their marriage certificate shows. The Mail this week obtained the public document certifying their union from the Hampshire Record Office.

It gives Nicholas’s occupation as ‘music producer and gardener’ and Ambre’s as ‘behavioural therapist’.

The son and heir of Earl Mountbatten of Burma, Nicholas Knatchbull, has quietly wed his fiancee Ambre Pouzet (both pictured) after a two-and-a-half-year engagement

He is thought to do gardening work at Broadlands in Romsey, Hampshire, where the couple live in a nearby cottage.

Newlyweds Nicholas, who turned 40 five days before the wedding, and Ambre, whose 37th birthday was last Saturday, were photographed together wearing their wedding rings on a recent stroll around Winchester.

He wore a T-shirt with a skull design and the motto ‘will to win’, tracksuit trousers and trainers, and slung his hoodie over his shoulder.

Ambre wore a black dress, denim jacket and trainers, and carried a large tote bag and a face mask.

The marriage certificate also shows that Ambre’s father is a retired manager of a rental company and her late mother was a retail manager. 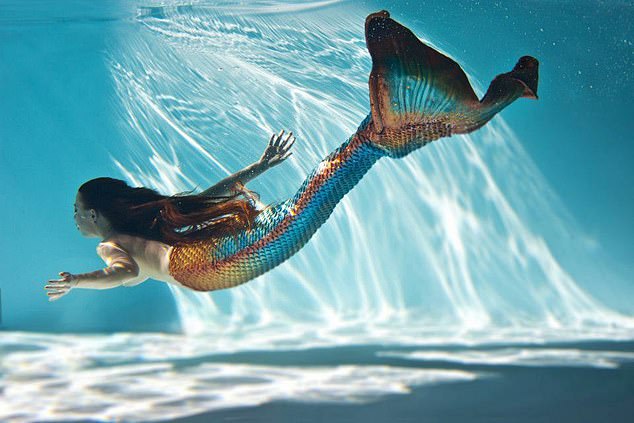 Ambre was once a ‘mer-lesque’ artiste, or performing mermaid, under the surname Saint-Clare. She could one day become the next Countess Mountbatten 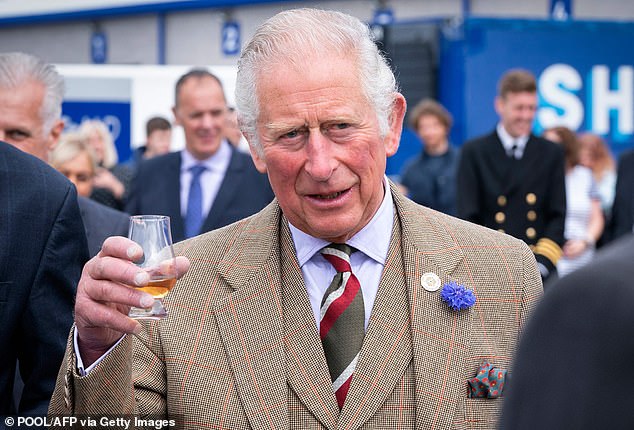 Nicholas, the godson of Prince Charles (pictured), has been engaged three times before and describes himself and Ambre as the ‘dynamic duo’

One of the witnesses is thought to have been a make-up artist friend of Ambre’s. Nicholas, who was educated at Eton, where he helped to mentor the young Prince William, has never wanted to use his courtesy title, Lord Romsey.

The marriage means Ambre, who is French and has lived in England for four years, could one day become the next Countess Mountbatten. But at the moment the new title he has been calling her by is ‘wifey’.

Nicholas, engaged three times before, describes himself and Ambre as the ‘dynamic duo’.

Her work as a mermaid included giving performances which involved donning a custom-made Swarovski crystal-encrusted mermaid tail for underwater shows and photoshoots.

Don’t get into a fight with Florence Pugh! The actress is only 5ft 3in but she mastered some dangerous moves performing her own stunts for the Marvel film Black Widow.

‘One of the coolest things was the stunt team was so excited about someone willing to do most of it,’ says the 25-year-old from Oxford. 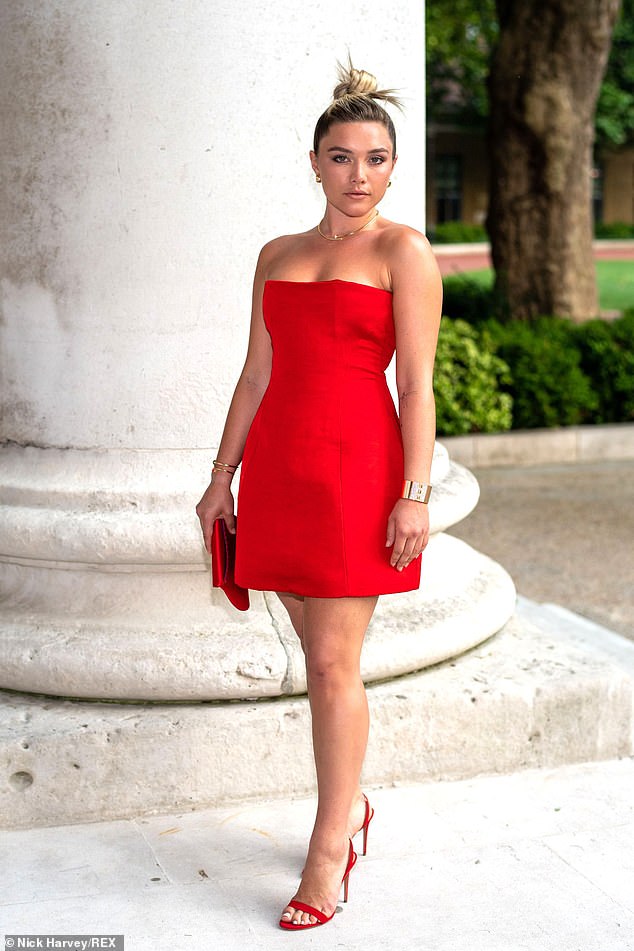 Although only 5ft 3in, Florence Pugh (pictured) mastered some dangerous moves performing her own stunts for the Marvel film Black Widow

‘I was taught by some of the best fighters around the world, it’s like an action-packed dream. Apparently, I’m good at high kicks.

‘I had a dancer’s background, so I knew I liked movement but it’s nice knowing you’re weirdly OK at something you’ve never done before.’

THE STARK TRUTH ON AGEING BY DAVID, 76

‘These absurd people wailing, ‘Oh, my great-grandfather died at the age of 92 . . .’ Everybody knows you only put them in a care home because you don’t bother to look after them. It’s true but nobody dares say it. That is the general truth.

‘That is why we have care homes. Societies that care about their old don’t have care homes. You don’t have them in Italy or most of the East because the family structure cares. Here, we’re indifferent. It’s one of the reasons we get such a creative society.’

Her signature neutral palette can be found in many homes of the rich and famous, but now ‘Queen of Taupe’ Kelly Hoppen’s volte-face will probably spark some expensive renovations.

The London-based interior designer, who counts David and Victoria Beckham and the Duchess of Cambridge among her many fans, admits she has decided to break her own rule of never mixing colours. 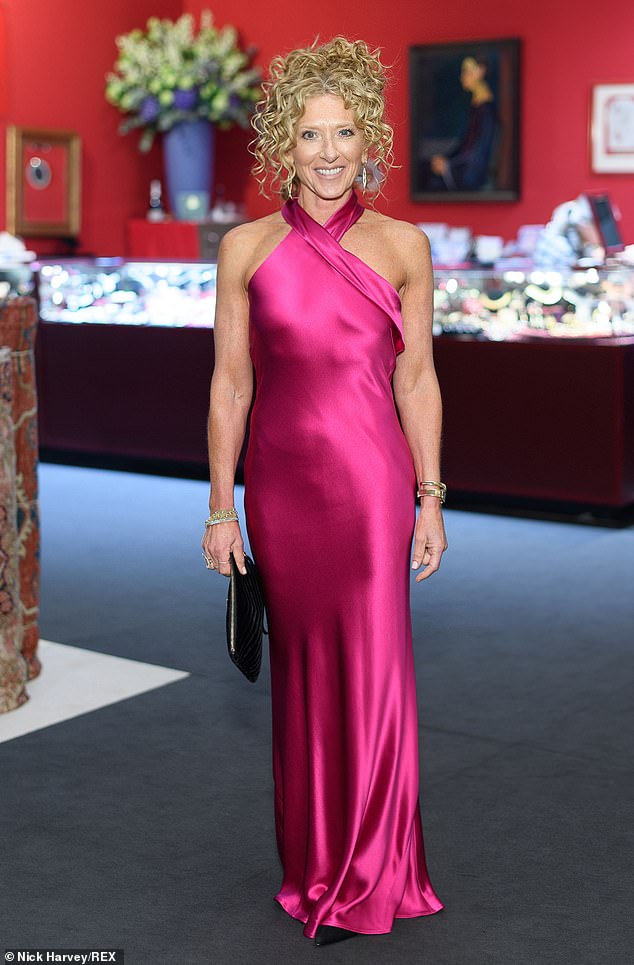 Her signature neutral palette can be found in many homes of the rich, but ‘Queen of Taupe’ Kelly Hoppen’s (pictured) volte-face will probably spark some expensive renovations

‘I’m approaching beige differently now,’ says Hoppen, 62. ‘It’s well documented in my books that mixing it with taupe was an absolute no-no — I even used to lecture this theory sternly in my school.

‘However, I’ve seen the light and now it makes me chuckle after all those years of saying I couldn’t do it, that I have done a volte-face.

‘The quest for softness we’re all on now is met by this pairing.’

FRY’S DELIGHT AS FANS BACK BID TO SAVE HISTORIC LIBRARY

In his last literary endeavour, Stephen Fry took on the mammoth challenge of retelling the famous Greek legend of Troy.

Now the erudite actor has become something of a Trojan horse himself, after leading his army of fans to join the fight to save Britain’s biggest treasure trove of manuscripts and books by Walter Scott, Charlotte Bronte and Robert Burns.

He is backing a ‘once-in-a-generation’ effort to prevent Honresfield Library — a collection of immaculately preserved 19th-century first editions and manuscripts — from being broken up and sold.

It was due to be auctioned this month but Sotheby’s postponed the sale to give time to find funding to keep it and allocate it to libraries around the UK for the benefit of the nation.

Fry, 63, rallied his 12.4 million Twitter followers this week by sharing with them news of the campaign, led by the Friends of the National Libraries charity. £15 million is needed to save the ‘astonishingly important’ works.

By yesterday, Fry, a crowd-pleaser and now crowd-funder, had incited 120,000 people to action, with a surge in membership of the charity — which is offering to give its £1-a-week membership fee to the fighting fund.

Hollywood star Ewan McGregor’s estranged wife, Eve Mavrakis, whom he left for a younger actress, is now enjoying a new romance of her own.

I can disclose that the French production designer, 55, who has four children with the Scottish actor, is now dating Hollywood film composer Jonathan Elias. 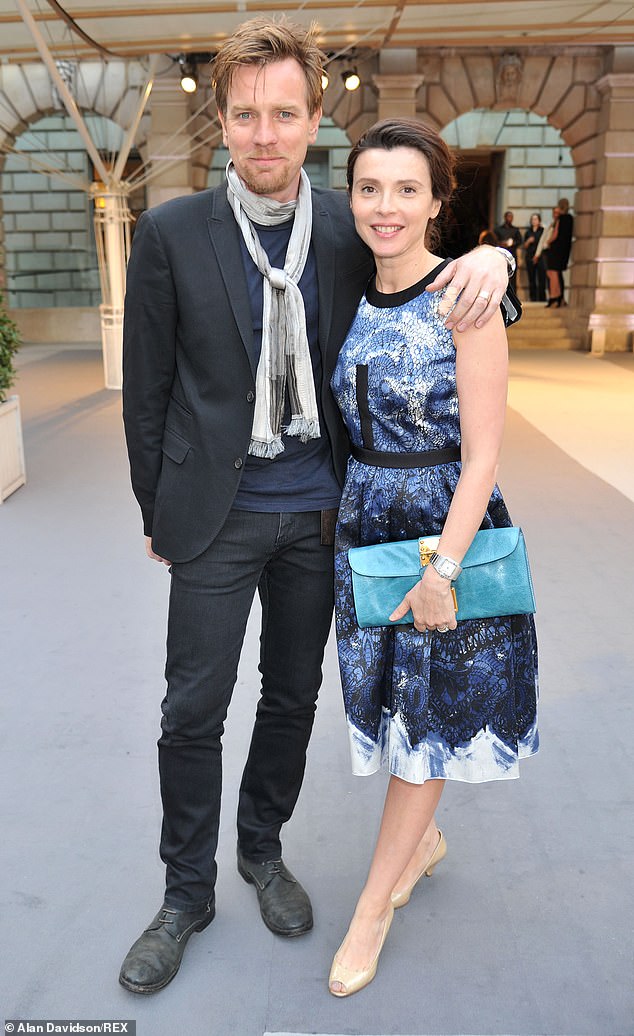 Hollywood star Ewan McGregor’s estranged wife, Eve Mavrakis (both pictured), whom he left for a younger actress, is now enjoying a new romance of her own 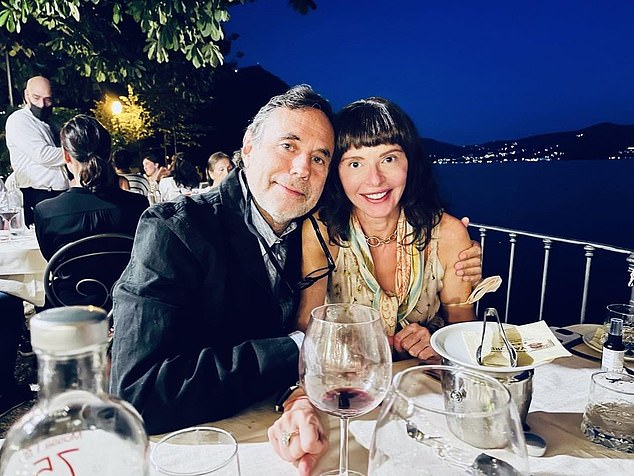 She and Elias, 65, who on his most recent album collaborated with the likes of Sting and Sinead O’Connor, are on holiday in Lake Como, Italy.

Describing their getaway as ‘magical’, Eve confirms to me that they are a couple.

It comes just one month after Ewan, 50, from whom she split in 2017, welcomed a son with his Fargo co-star Mary Elizabeth Winstead, 36.

Top chef Raymond Blanc discovered how to nurture his spiritual side as he recovered from Covid-19 last year. ‘I learnt to meditate in hospital and that was my saviour,’ says the 71-year-old.

‘I am changing my life, making improvements. What was once undervalued has become greatly valued.’ Namaste.

Tough-guy actor Ross Kemp, best known for playing thuggish Grant Mitchell in EastEnders, has never recovered from his dining experience at an upmarket eaterie in Spain.

‘I was taken out to a restaurant in Madrid by uber-famous people,’ says Kemp, 57. 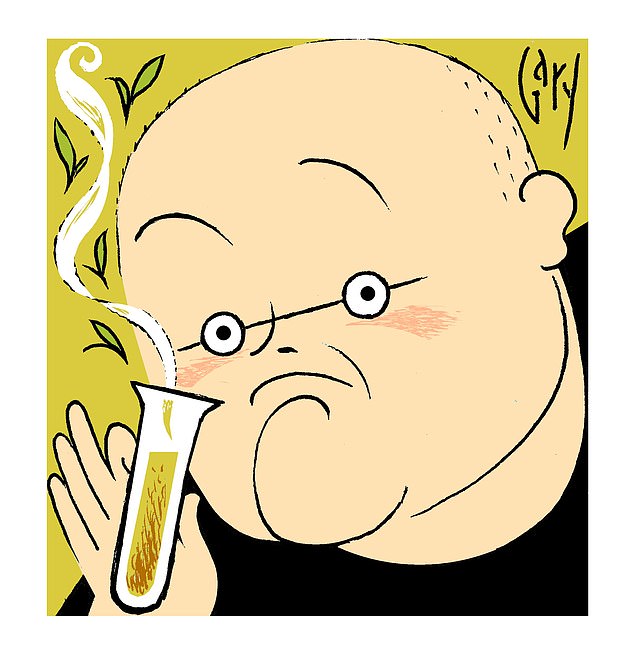 Tough-guy actor Ross Kemp, best known for playing thuggish Grant Mitchell in EastEnders, has never recovered from his dining experience at an upmarket eaterie in Spain

‘I think it had, like, more than five Michelin stars. They said, ‘We have five teas, would you like to try our teas?’ I was like, ‘Yeah, OK.’

‘They had the tea in kind of a big test tube with a cork on top — and you didn’t drink it, you smelt it, that was your tea! It’ll be the last time I ever go to a restaurant like that.’

Damien Hirst can command millions of pounds for his creations, so I doubt that Ed Sheeran was too pleased when his drawing by the artist was defaced at his home.

Society eyewear designer Tom Davies, whose clients include Sheeran and style guru Susannah Constantine, admits he got a little carried away when he visited the pop star at his £3.7 million house in Suffolk.

‘I went down into his cellar and he gave me a tour of his recording studio,’ he explains.

‘I’m thinking, me? I saw Damien Hirst had drawn a shark on his wall and I thought, ‘This is too good to be true,’ so I drew a little pair of specs on the shark and signed my name under it.’

She wed her girlfriend three times, but actress and novelist Sophie Ward has nothing to show for it. Materially, that is.

The 56-year-old reveals that she has lost the wedding ring from her union with playwright Rena Brannan after putting it in her purse for safe-keeping on a film set. 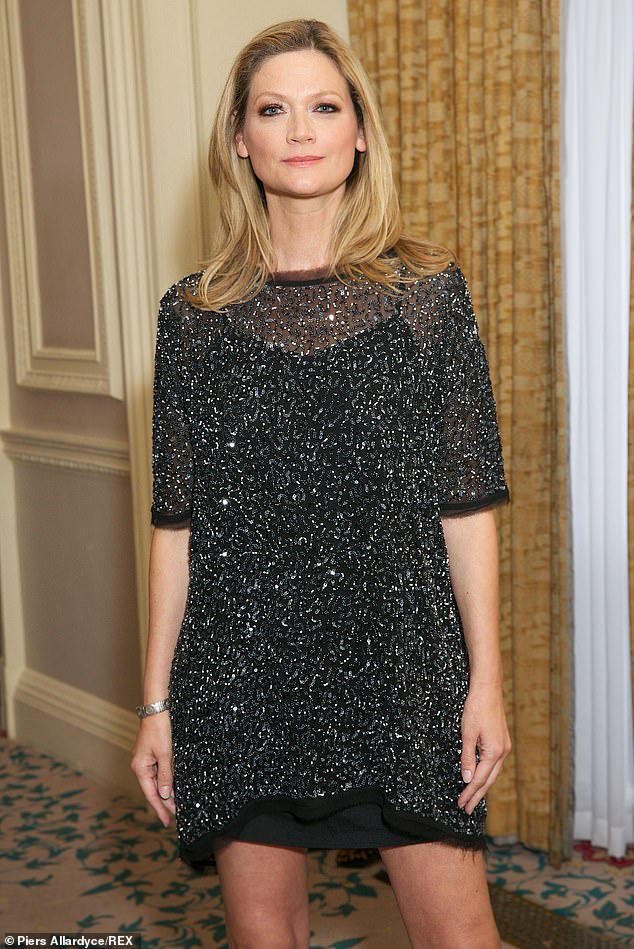 Sophie Ward (pictured), 56, reveals that she has lost the wedding ring from her union with playwright Rena Brannan after putting it in her purse for safe-keeping on a film set

‘A taxi driver dropped me at the hotel and I scooped all the change I had out of my purse, in which was my wedding ring. I believe I handed it to him.’

Sophie, who had a starring role in 1985’s Young Sherlock Holmes, began dating Rena after she split from her husband, Paul Hobson.

‘That ring had been through three weddings because my wife and I had to get married three times,’ she adds.

‘The first time was 21 years ago at the Groucho Club, the second was a civil partnership in Stroud and the third was when we were legally allowed.’

Women often face longer queues than men to use the, er, facilities… but former Strictly Come Dancing star The Rev Richard Coles has a solution:

‘It’s an outrage in a time when we’re supposed to have understood something about sexual equality, that women have to queue round the block to use the loo.

‘I’ve always thought: why don’t you just double the size of women’s facilities and halve the size of ours? Obviously inconveniencing myself but, in the interest of fairness, it would be good.’