Mourinho and his backroom team: The new-look supporting cast at Man Utd

Manchester United manager Jose Mourinho has a new-look backroom team ahead of next season.

Assistant Rui Faria ended his 17-year partnership with the Portuguese boss at the end of the 2017-18 campaign.

The 42-year-old, who was linked with the manager’s post at Arsenal, wanted to spend more time with his family before testing himself as a head coach and left with Mourinho’s blessing.

During the season United midfielder Michael Carrick also revealed that he would retire and take up a coaching role at the club.

Mourinho revealed he would not replace Faria and have a No 2 next season, he said: ‘I’m going to organise my coaching staff next season in a way where the assistant-manager doesn’t exist.

‘I’m going to have coaches, assistant coaches, fitness coaches and a structure where they have specialists in different areas connected to performance. And my analysts. I’m not going to have an assistant manager in the sense of the word.’

As a result, Mourinho has reshuffled the team that supports him as he looks to close the gap on rivals Manchester City.

As Red Devils boss he has won the League Cup and the Europa League but Manchester City’s stunning success this year meant it was the first time Mourinho had finished his second season at a club without winning a domestic league title.

After finishing second in the league, United were also beaten by Chelsea in the FA Cup to conclude an underwhelming 2017-18 campaign. 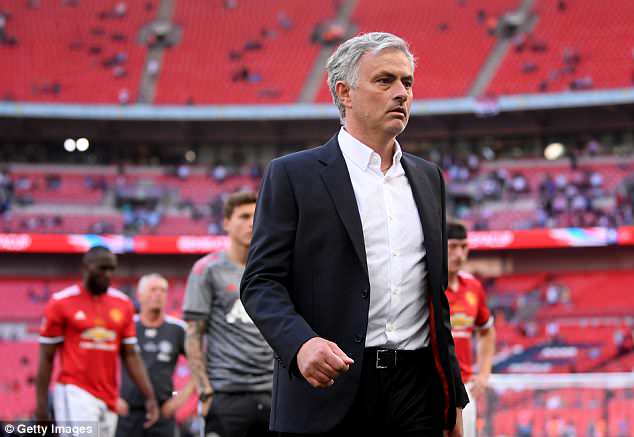 Sportsmail reported before his arrival how the 41-year-old Italian, who worked under Mourinho as fitness and rehabilitation coach at Inter Milan, was to leave Sampdoria after being invited to link up with his old boss once again.

Rapetti has been brought in to help offset the departure of Faria.

He began his coaching career with the Under 19s at Inter, before moving up to the first team to work with Mourinho.

From there, he moved to Empoli as a fitness coach, before joining Sampdoria in a similar role at the start of the 2016-17 season. 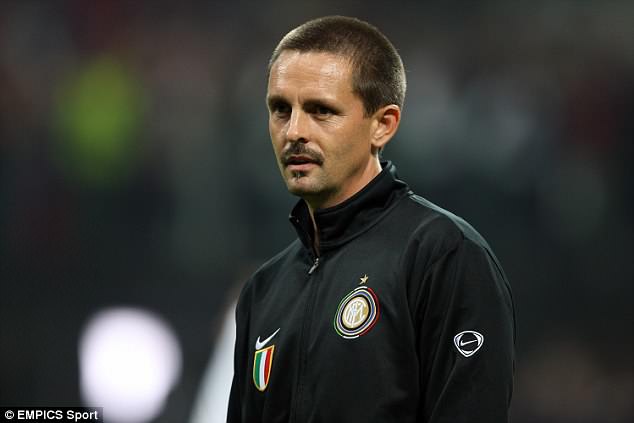 After calling time on his playing career, the 36-year-old has remained at United to take up a coaching role under Mourinho.

At the club’s end of season awards said United will be losing a ‘big player’ but keeping a ‘big man’ as he paid tribute to Michael Carrick.

In a touching speech, Mourinho presented Carrick with his new coaching kit, which included a whistle to order his former team-mates around and a packet of pain killers for when they don’t listen. After calling time on his playing career, the 36-year-old has remained at United as a coach

Mourinho has promoted United Under 18s coach Kieran McKenna to the first-team set-up.

The Northern Irishman joined the club in 2016 and he guided the U18s side to the Premier League Northern trophy in the season just finished.

Prior to his two seasons within the youth ranks at Old Trafford, McKenna managed Tottenham’s U18s side. 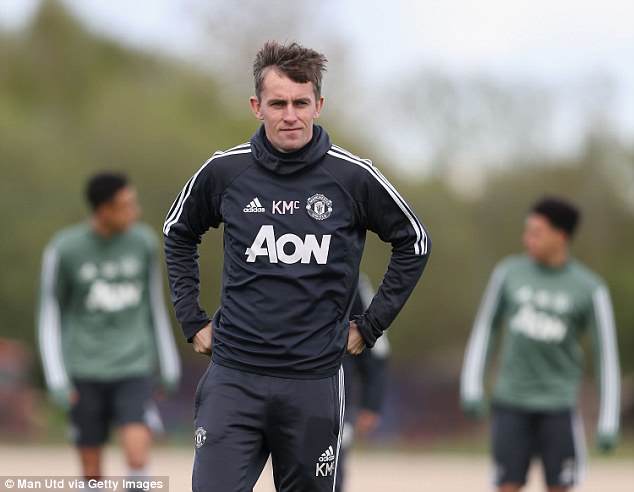 Louro, who started at United with Mourinho, hit the headlines at West Ham during the 2015-16 season when he was sent to the stands for raging at referee Jon Moss but the Portuguese has tended to stay under the radar in two spells at Chelsea.

Between 2004 and 2007 he was the goalkeeper coach at Stamford Bridge but in his second spell he performed a more general role as assistant first-team coach.

Like Faria, Louro has a tendency to get into the odd touchline spat. He was alleged to have knocked over Barcelona club delegate Agustin Herrerin in an El Clasico meeting while with Real Madrid and was caught on camera aiming derogatory gestures at the opposition bench.

He plays a key role pre-match during training but is a more reserved figure during matches. 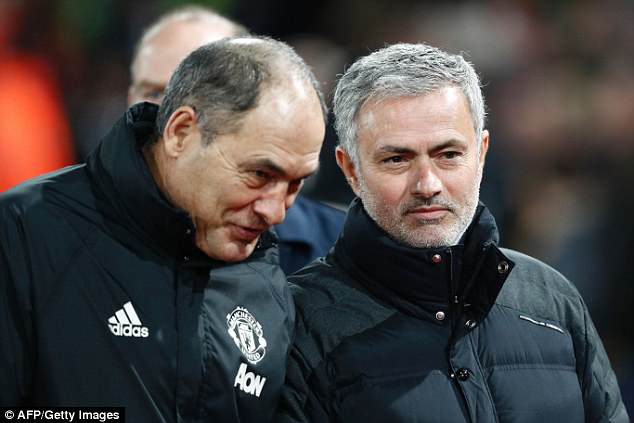 The United manager gave Lalin a more prominent role as part of a shake-up of the medical department last summer.

Lalin was believed to be exerting greater influence behind the scenes, with Mourinho keen for one of his trusted lieutenants to try and speed up the players’ recovery process. Mourinho moved to appoint one of David de Gea’s most trusted confidants as the club’s new goalkeeping coach in July 2016.

When Quique Sanchez Flores, Atletico Madrid coach at the time, and his keeping coach Alvarez took over, De Gea, then 18, was in line to be sent out on loan.

Alvarez said: ‘El Nino (the boy) is the best one.’ Flores replied: ‘Are you serious? He is weak physically, he looks like a little boy.’

They developed a training regime and by the end of the season, De Gea was the first-choice goalkeeper of a Europa League-winning side.

Alvarez is a close friend of Jorge Mendes, Jose Mourinho’s agent. It is likely that Mendes and De Gea recommended the coach. 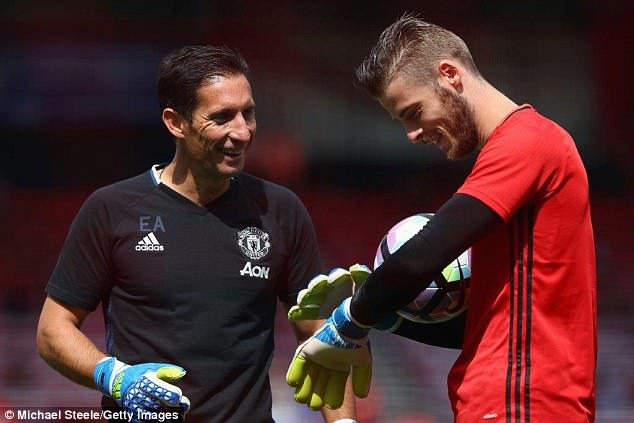 Mourinho’s compatriot Ricardo Formosinho was at Porto when Mourinho led them to Champions League glory in 2004.

Formosinho was also a scout for Real Madrid when Mourinho was manager at the Bernabeu. Cerra was part of Mourinho’s backroom team at Stamford Bridge.

At United he took a tongue-lashing from Mourinho ahead of their game against Ukrainian side Zorya Luhansk in September 2016, when he handed Paul Pogba incorrect instructions.

The 53-year-old pointed his finger angrily at Cerra and yelled at the former Chelsea coach, who produces visual reports and info-graphics in his role at United. 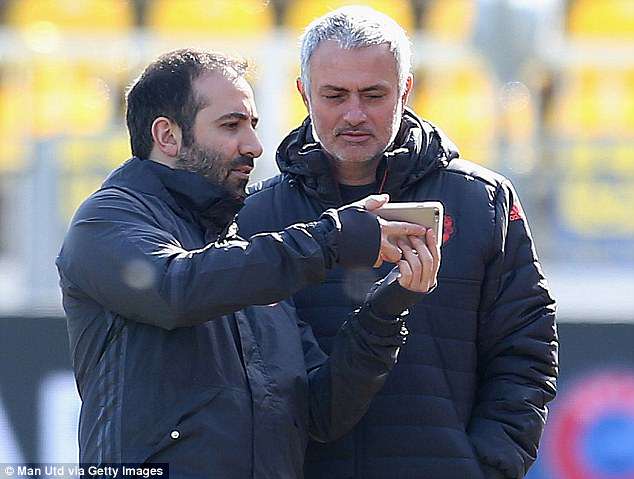