Move over HARRY & MEGHAN!: The other wedding of the year exclusive

Last month, first-time bride Olive Moyses, 75, and widower Chris Stark, 82, proved that it’s never too late to say ‘I do’

The bride was only a few fashionable minutes late. Or, arguably, more than half a century late. Unlike her contemporaries, who mostly wed in their 20s, Olive Moyses, a retired nurse and farmer from the Yorkshire Dales, has got married for the first time aged 75. Last month, after a ‘bit of a whirlwind courtship’, she and Chris Stark, a retired Methodist minister she’d long known as a friend, tied the knot in a classic 1940s-style wedding. ‘Why wait?’ says Chris, 82, a widower of six years. ‘We were both quite certain from the word go.’

‘I dreamed of being married,’ says Olive, ‘but there was never anybody as suitable as this one. I was always shy and now I’m learning not to be.’

Their surprise engagement last December, five months after getting together, delighted their small but close community in Pateley Bridge. The message that it’s never too late for love blew warmth and hope in with the wuthering winter wind.

Olive and Chris on their wedding day

Olive was born in the farmhouse that she and Chris now share and, as a health visitor and GP practice nurse, she has cared for countless new mothers and babies in the area. For years she has lived alone after nursing first her mother, then her brother and father, through their last illnesses. ‘Only on very odd occasions have I been lonely,’ she reflects. She has been out with one man before, and that was in her mid-20s. ‘Most of the time I’ve just been content to be here.’

The house looks out on a picture-book landscape: stone houses folded into hilly green fields straight out of J R R Tolkien’s Hobbiton, where Olive has sheep, hens, dogs, a cat, and a now dwindling pride of raucous peacocks who arrived uninvited and multiplied. The menagerie can’t converse with her… ‘No,’ she concedes, ‘but you can talk to them.’ She keeps busy as a volunteer driver for patients needing hospital transport and has long been active in the local Methodist church. 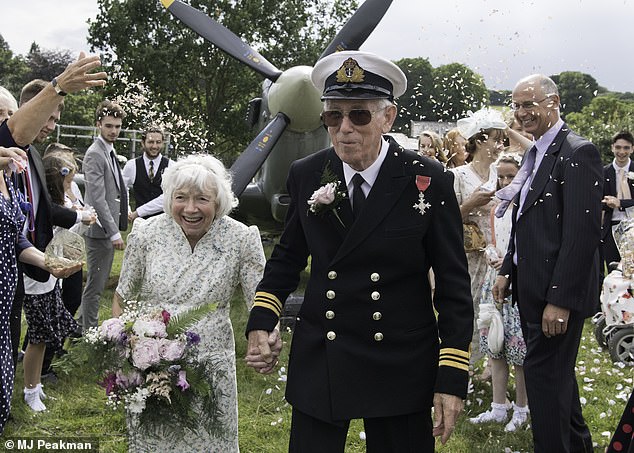 For seven years, Chris was superintendent minister to all the chapels in the dale – there were ten, now reduced to five – so he has known Olive since the early 1980s; they often worked together with youth groups. After he retired, he and his late wife Katie fostered more than 20 children waiting for permanent homes and adopted two of them. Tina, who was born without arms or legs, and Emma (Olive’s chief bridesmaid), who has learning difficulties, joined their three daughters Catherine, Sarah and Rachel to become part of the family. Chris has ten grandchildren, so from having almost no family, Olive has acquired a tribe: ‘It’s an experience and a challenge,’ she says.

This Christmas they could be catering for 32. Chris recognises that it’s not easy for everyone to think of him in a new relationship, but it helps that Olive is someone Katie had known and liked. ‘If you want to marry again, it is a testament to being very happy the first time, or why else would you repeat it?’ he says. ‘My eldest daughter Catherine whispered, “Mum would have approved,” when we got engaged and that was good to hear.’ 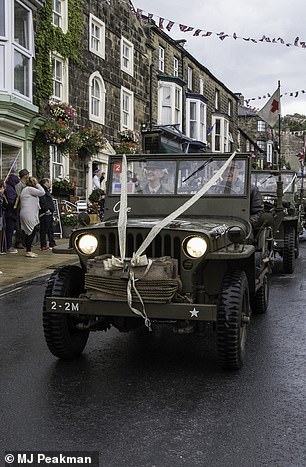 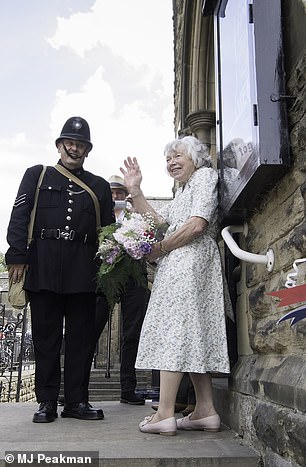 Chris was driven to church in a posse of six jeeps, while Olive had a ‘police’ escort

Chris had formed one or two friendships with women since his much-loved Katie died in 2012. ‘But I wanted to enjoy the kind of relationship I’d had when I was married,’ he explains. ‘He’d reached the point where he was thinking of perhaps trying the internet, or so he tells me,’ says Olive.

‘Then I went to preach at Olive’s chapel,’ Chris says, taking up the story. ‘She was on duty as the steward who prays with the preacher before he goes in. She said the most beautiful prayer and it was as though a voice was telling me, “You should think about Olive.” So you could say divine intervention was involved!

We’re very spontaneous and laugh a lot. It’s like a teenage romance

‘A few days later, I asked her out to the Brighouse and Rastrick Brass Band concert at Ripon Cathedral. We went in as friends; then, as we walked out, we quite naturally held hands, and when we got home we kissed.’ Other dates followed: ‘Olive isn’t used to eating out a lot,’ says Chris, ‘but I always have. So we go out regularly to the local chip shop or Indian restaurant. The Half Moon Inn in Fellbeck is a favourite. We’re very spontaneous. We laugh a lot every day. In some ways it’s like a teenage romance.’

It’s a romance deepened by their separate experiences and a shared history that ‘helps a lot’, they say. Olive and Chris know that they make a good team from their years of doing youth work together, taking groups for rambles, to play bowls, croquet and crazy golf. ‘Chris was good to me when I trapped my finger in the minibus door,’ laughs Olive. They are comfortable and easy in each other’s company, recounting their memories of a costumed celebration of Charles Wesley’s birth, when Chris appeared dressed as the co-founder of Methodism, crowned with curls: ‘Ah yes,’ he says. ‘My modified Dolly Parton wig! Olive wore a peasant smock and saw some walkers off with her pitchfork.’

‘I did not!’ says Olive, enjoying the tease. ‘They were lost on the footpath and I went to help them, quite forgetting my appearance might alarm.’

‘I always found Olive attractive,’ says Chris. ‘She’s a strong person who’s had a lot to contend with, and selflessly gave up her chances of personal happiness.’ 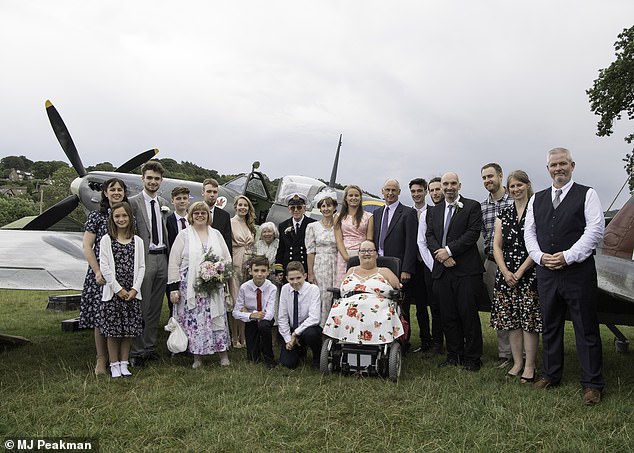 Olive and Chris celebrated their wedding with their extended family, including Chris’s daughters Rachel, Emma, Catherine, Tina and Sarah

‘When my mother died in 1970,’ says Olive, ‘I thought, right, my job now is to look after Dad and keep him happy. I probably put up a front that didn’t let people in, which was silly. Then, in the mid-90s, my brother Ronnie died of a stroke at only 58, and Dad went in the following July.’ Her father was 94. ‘I’m hoping Olive’s going to take her longevity from him,’ says Chris.

Once they had got together as a couple, the next step seemed only natural. ‘Chris half hinted at first by asking, “What do you say to us getting betrothed?”’ Olive recalls. ‘What a wonderful old word! I only managed to murmur something like, “That sounds good” – which he didn’t follow up.’ Later on, Chris was more forthright: ‘He said, “Shall we get engaged?” and I said yes at once.

We weren’t going to tell people until Christmas, but word got out… There are some secrets that you just can’t keep!’ Chris went looking for a ring, but paled at some of the prices; then Olive picked out the very one – a pretty little amethyst – that he had liked best in the jeweller’s window. ‘That sort of synchronicity happens a lot between us,’ he smiles.

But any thoughts of a quiet wedding were scuppered when they heard that Rev Mike Poole, the minister of Pateley Bridge Methodist Church, was looking for a couple to marry over the town’s annual 1940s nostalgia weekend. In the past two years, long-married couples had come forward to renew their vows, but Chris and Olive were the real deal. Marrying while land girls danced with spivs on the high street and the band played ‘In the Mood’ would make the day extra special, especially for Olive as a first-time bride. ‘Once we’d put ourselves forward, everyone was so enthusiastic we couldn’t back down,’ says Olive. ‘Not that I wanted to – I couldn’t wait to see Chris [a one-time naval chaplain] in his lieutenant commander’s uniform.’ 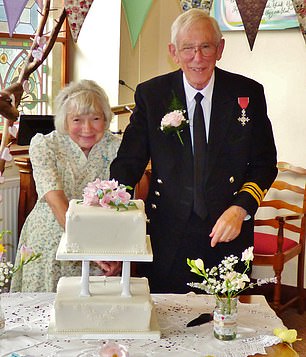 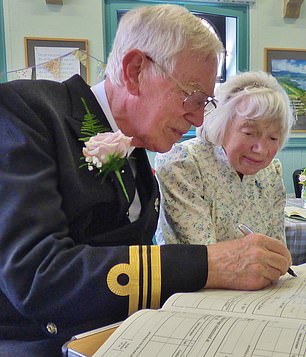 ‘I couldn’t wait to see Chris in his lieutenant commander’s uniform,’ says Olive

The bride chose a sprigged floral frock cut from a 1944 dress pattern and a local seamstress offered to make it for her. Indeed, once the word was out, everyone wanted a hand in the proceedings: a 1940s Rolls-Royce was rustled up as the bridal car, while Chris was driven to the church in a posse of six jeeps. Another friend lent a Northumberland holiday home for the honeymoon. The chapel ladies of nearby Summerbridge turned out in force to create a perfect vintage tea reception as their gift to the newlyweds, with classic cakes daintily arranged on mix-and-match stands. Beneath rustic bunting, tables spread with white linen held jugs of elderflower cordial and jam jars of freesias, sweet peas and gypsophila – all styled by Catherine to re-create the countryside at haymaking.

I thought I’d be solo for the rest of my life, then along came Prince Charming!

What Olive most looked forward to on her wedding day, though, was ‘being in church with Chris and becoming his wife’. The couple feel they have lots left to do together: pensionable pipe and slippers are nowhere on the agenda. They’re both still active gardeners: ‘We plan on going round the lawn in tandem,’ says Olive, ‘he with his mower, me with mine.’ The new Mrs Stark will carry on as a hospital driver and they will both volunteer at the local museum. They dream of setting up a trust that will help young people sample the small-farm way of life they love and the community spirit it engenders. ‘Olive is pretty fit, so my dad may have to raise his game,’ says Catherine. ‘I’ve seen her hopping up the barn ladder to stack hay at harvest time.’ Olive still got up to lamb a dozen ewes this spring: ‘Next year,’ she says mischievously, ‘I’ll be able to turn over at night, nudge Chris and say, “It’s your turn now!”’

Olive has sorted through 100 years of memories and family furniture to make room for Chris and the treasures he can’t part with. ‘I don’t think it will be the shock you might imagine, having a man about the house,’ she says. ‘When my father and brother were alive, it was a very masculine household. It’s going to be different having someone else to think about every day. But that’s good – it means someone to share my life with instead of being on my own. Last year it looked as if I’d be solo for the rest of my life, then along came Prince Charming! I’ve left the best of my life till last,’ says Olive.