A science teacher, who was mown down as he tried to stop a parent driving into school grounds, has welcomed the father’s 10-month jail sentence.

Rainier Schoeman, 22, sent the terrified Gareth McCarthy, 61, flying over the bonnet of his Volkswagen and almost knocked two children off their bikes.

Schoeman was picking up the child from The Winston Churchill School, in Woking, Surrey, when he stopped to speak to the teacher who was stood at the car park entrance.

Mr McCarthy then turned his back to Schoeman – who accelerated towards him, throwing him over the bonnet.

Schoeman, of Woking, Surrey, admitted assault occasioning actual bodily harm, using his car as a weapon and was jailed for 10 months.

And Mr McCarthy believes the father ‘deserved what he got’.

He told The Sun: ‘I’m glad the law caught up with him. Every time I think about the incident, I get the sweats.

‘I’m making myself do the same car park duty because I don’t want to let it beat me.

‘I do worry but I’d rather face my demons than run away from it.’

The court heard Schoeman accelerated his car into the teacher after the he told him he could not drive into the staff car park.

Schoeman was described as being ‘immature’ and having behaved ‘outrageously’ by his own defence barrister in court.

The teacher was told to stand in the car park entrance and stop vehicles after a letter was sent out to parents by the head teacher citing it a risk to the children coming out of the school.

Mr McCarthy, who had to have his wounds to his head glued after it was smashed against the floor, described Schoeman as a ‘selfish, brutish bully’, the court heard.

Ms Morrish said: ‘Mr McCarthy turns his back on the car and feels the bumper on the back of his legs, making him sit down on the bonnet. 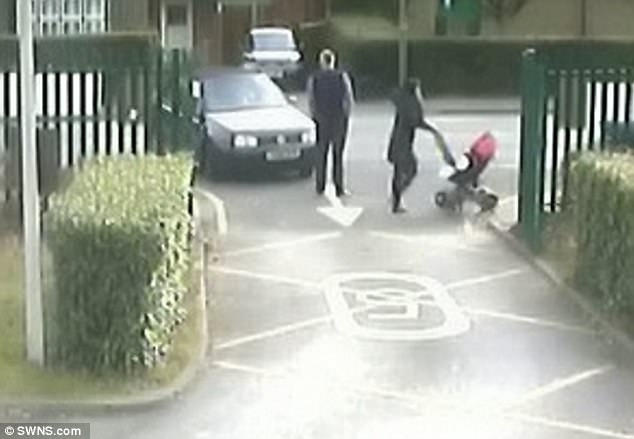 Rainier Schoeman, 22, saw the teacher and drove straight into him by the school gates in Woking 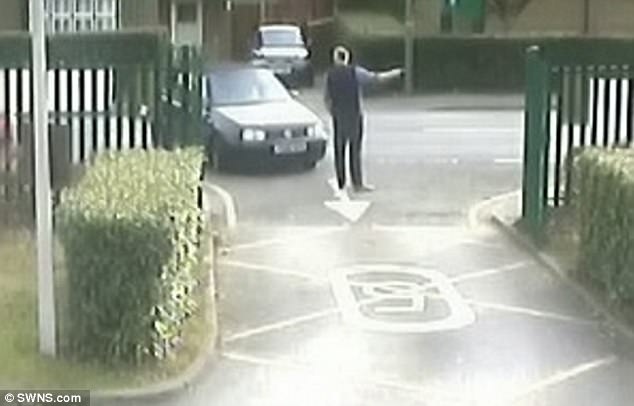 ‘Within seconds the car accelerates, forcing him back onto the bonnet. The next thing he remembers is being spoken to on the ground.

‘Two boys on bikes who were using the entrance were narrowly missed.

‘Gareth McCarthy has very little recollection of the event himself. CCTV evidence shows he is on the ground for some time, clearly dazed.

‘He had a wound to the back of his head which required gluing,’ she told the judge at Guildford Crown Court.

Schoeman also admitted having not read the small print on his insurance documents, to not being a named driver on the car – a Volkswagen Golf belonging to his partner. 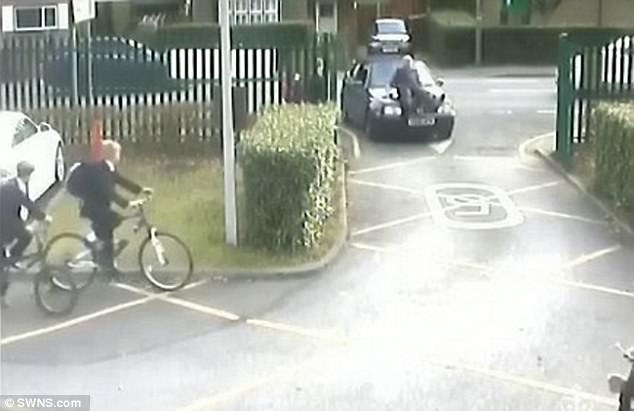 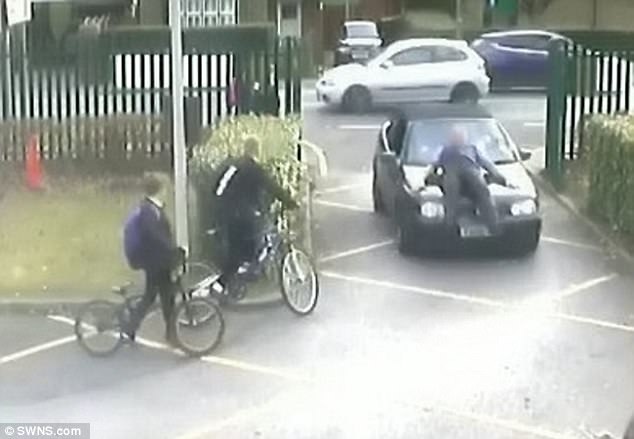 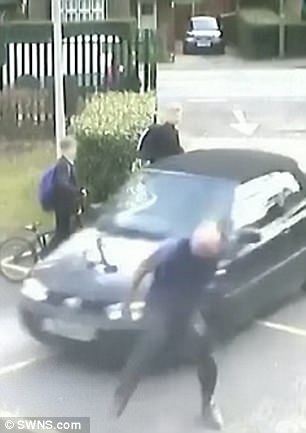 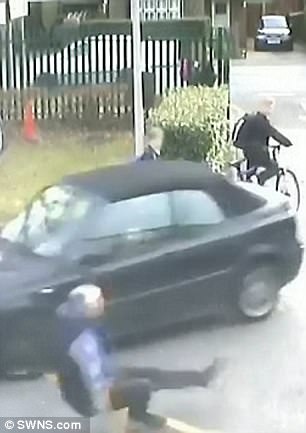 Ms Morrish told the court that his partner’s nine-year-old daughter was also in the back on the car at the time of the incident.

Headteacher Zoe Johnson-Walker added: ‘This was a shocking, extraordinary incident, which has had an impact on the teacher and the rest of my staff.

‘It is regrettable that an individual has chosen to behave with such a blatant disregard for someone simply doing their job in trying to keep our students safe.

‘The governors and I believe that this is a just outcome and sends a clear message about behaviour towards public servants.’

Schoeman admitted causing actual bodily harm, dangerous driving, driving without insurance and having no MOT after the incident shortly after 3pm on February 20.

The judge sentenced Schoeman to 10 months in prison, with a two year and five month disqualification from driving, followed by an extended test. He ordered Schoeman to pay a victim surcharge of £140.

Judge Jonathan Davies said: ‘One line stood out to me from Mr McCarthy’s statement: ‘I am appalled by this man’s actions’.

‘It stood out to me because that is the word that came to my mind. Appalled. Your defence used the word outrageous. 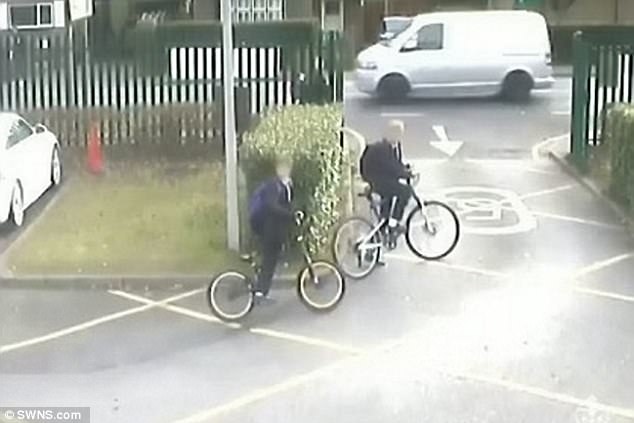 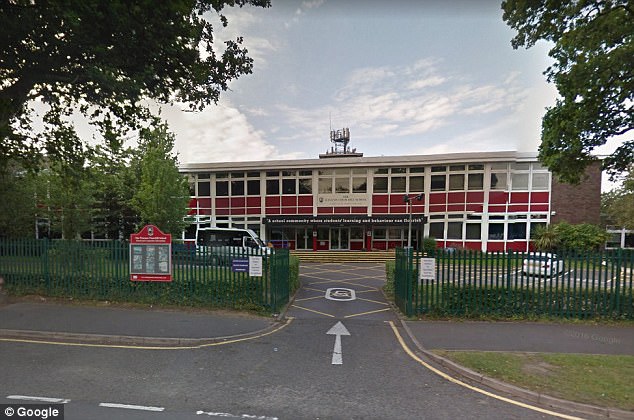 The child was being picked up from The Winston Churchill School, in Woking, Surrey (pictured)

‘It troubles me to hear from Probation that some how you seek to blame Gareth McCarthy for what happened. He was going about his work and the school had every right to restrict access to this car park.

‘You took matters into your own hands by nudging him. it’s horrific watching the video with his head banging on the concrete.

‘These offences in my judgement are so serious that you should go to prison.

‘It was one moment of madness. Of rage. You really need to examine yourself and ask why you behaved in that way.

‘In his statement, Gareth McCarthy describes you as “a selfish, brutish bully”. And in that moment, you were.’

Investigating officer PC Andrew Searle, from the Surrey Roads Policing Unit, added: ‘Rainer Schoeman’s actions on that day were absolutely disgraceful and could have had far worse consequences for the teacher, and other children who he narrowly missed.

‘It is clearly no way to behave in front of children at a school firstly with their safety in mind, but also it sets an incredibly poor example.

‘We all know that school car parking situations are a frustration for many parents around the country, however if you cross the line there is every chance you can go to prison as Rainer Schoeman has done.’