MPs and Lords moan about food portions and prices

Spoilt MPs, Lords and their staff have their meals significantly subsidised by taxpayers but this hasn’t stopped them moaning about the price and quality of their food, a report has revealed.

Politicians made a series of complaints about the food in the canteens of the House of Commons and House of Lords, leaving bitter moans with catering staff.

Their list of ridiculous complaints, ranging from whines about soggy fish to a lack of froth on their coffees, were highlighted in a new report from the House of Commons.

A new report revealed that MPs, Peers and their staff have left a series of moans about the quality and price of the taxpayer-funded food they get from House of Commons and House of Lords canteens

The report, published as part of Commons transparency laws, was revealed by the Sun.

They highlighted some of the more outrageous complaints made to staff at the taxpayer-funded canteens.

One customer, who ordered a £4 squid, moaned: ‘I feel like Oliver Twist begging for more.’

Others complained about the lack of vegan food, the flimsy forks, and the thickness of the meat. 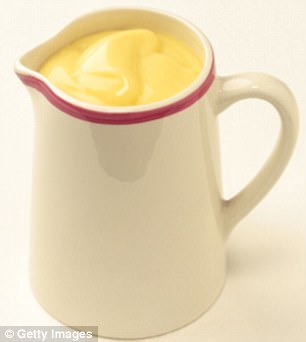 One diner left a complaint about the consistency of their custard

MPs earn almost £75,000 a year and, along with peers and their staff, are serviced by a range of cafes, bars and restaurants.

These eateries in the House of Commons and House of Lords allow politicians and their staff to purchase food at greatly reduced prices.

Other complaints include moans about the staff, with diners saying they were rude and one busy barista didn’t answer phones.

In one of the more ludicrous gripes, a diner complained about the consistency of their custard.

There were also complaints from Muslim MPs who wondered at the lack of halal options available.

A Spokesperson for Parliament said: ‘Catering services in Parliament proactively seek feedback from customers to ensure high standards are maintained across catering outlets on the parliamentary estate.

‘We provide value for money for a diverse customer base with over 1.5 million customer transactions on a yearly basis, including visitors to Parliament and the press. Since 2011 the overall cost of catering in the Commons has more than halved.’