Furious MPs were told today Mark Zuckerberg has agreed to give evidence to the European Parliament – despite still snubbing a House of Commons inquiry.

Damian Collins, the chairman of the Culture, Media and Sport Committee, stunned his colleagues by revealing the development while they grilled another executive sent in Mr Zuckerberg’s place.

Senior MEP Guy Verhofstadt immediately seized on the news to welcome Mr Zuckerberg’s plans in an intervention that will further irritate MPs.

Chief technical officer Mike Schroepfer was told today his company was a ‘morality free zone’ during a marathon hearing into fake news.

He admitted a Facebook investigation had discovered ‘billing and administration connections’ between Cambridge Analytica and Aggregate IQ in the run up to the Brexit vote.

Angry MPs told demanded the ‘whole truth’ about the abuse of users’ data in the wake of the scandal.

Today’s hearing comes a day after Facebook’s shares soared 63 per cent to $5bn (£3.6bn) in the first three months of the year despite the data privacy scandal.

Culture, Media and Sport Committee chairman Damian Collins stunned his colleagues by revealing the development while they grilled another executive sent in Mr Zuckerberg’s place 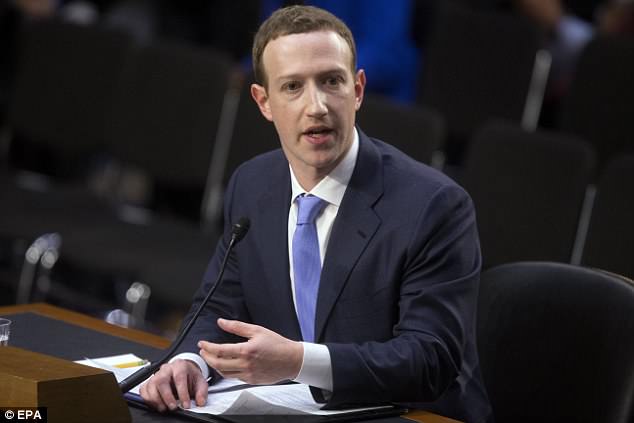 He said: ‘We still do need the opportunity to put some of these questions to him.

‘What has frustrated us has been a pattern of behaviour, an unwillingness to engage. When we asked if it would investigate on the same terms that it had in America, it refused to do so and then changed its mind.

‘When we had our session in Washington we asked… expressly about data breaches. We since learned that the company knew an awful lot more than it told us, and we wouldn’t have learned any of that if it hadn’t been for investigative journalists.’ 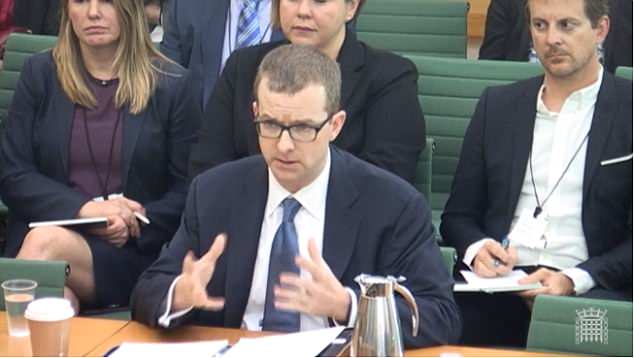 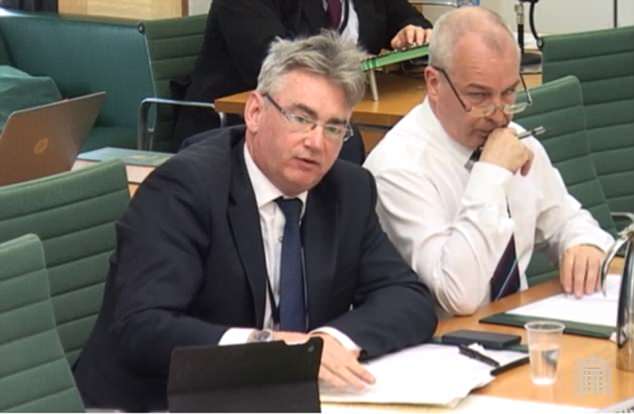 Mike Schroepfer, Facebook’s chief technical officer, said Aggregate IQ spent considerable amounts targeting the Brexit vote in 2016, but he had found no records showing Cambridge Analytica, the controversial election consultants at the centre of a data scandal, had done the same.

However, Mr Schroepfer told the parliamentary inquiry into fake news that a Facebook investigation had discovered ‘billing and administration connections’ between the two companies.

Appearing before the Digital, Culture, Media and Sport select committee, he said: ‘The collaboration we saw was some billing and administration contacts between the two of them.

‘We would see similar people show up between the two accounts.’

Asked to provide further details on the individuals involved, Mr Schroepfer said he had given ‘extensive information’ to the Electoral Commission and the Information Commissioner but was hesitant to go further in public.

The companies are involved in investigations into how Facebook data may have been misused to help political campaigns target advertising on social media and whether there was collaboration between Brexit campaign groups.

Cambridge Analytica has repeatedly denied working on the EU referendum on behalf of campaign group Leave.EU, but emails provided to the committee by a former CA employee detail numerous meetings between the two organisations and an unpaid invoice for more than £40,000.

Brexit campaign groups Vote Leave and BeLeave, as well as the DUP and Veterans for Britain, paid Aggregate IQ millions of pounds for services related to the Brexit campaign, but this is the first time precise details about how it may have been used have been revealed.

Mr Schroepfer said: ‘I believe we are producing more extensive information for both the Electoral Commission and the Information Commissioner.

‘I think we are trying to give them all the data we have on the ads, what they spent and what they are like.’

Mr Schroepfer was attacked by a Commons committee over the social network’s bid to use the courts to try and stop a major privacy scandal over stolen Facebook data being exposed.

Facebook’s chief technical officer was told his company was ‘the problem’ at the heart of the Cambridge Analytica expose.

Mr Schroepfer appeared in Parliament today after Mark Zuckerberg refused to fly in from California to give evidence in person.

He vowed that by next year’s local elections, British voters would have access to more information about how and why they see political advertising on Facebook.

Mr Knight blasted: ‘I put it to you that Facebook is a morality-free zone.

‘You aren’t an innocent party maligned by the likes of Cambridge Analytica: you are the problem.’

Mr Schroepfer replied: ‘I respectfully disagree with that assessment.

‘You want us to say we’re responsible, which we have on multiple occasions, and you want transparency on ads and other things.

‘The core of our job is to build a service which helps millions of people connect with each other around the world every day.’

Mr Schroepfer apologised for Facebook’s decision to send legal letters to journalists covering the story in a bid to stop the expose coming out.

Turning to the 2016 EU Referendum, Mr Schroepfer said Facebook had found no evidence Cambridge Analytica had spent money on advertising during the referendum.

But Aggregate IQ, a linked company which multiple Brexit campaign groups spent large portions of their campaign budget with, ‘spent two million dollars on the Brexit referendum in the UK in 2016,’ he said.

Mr Schroepfer stressed that political advertising on Facebook is ‘a very small, low, single-digit percentage of our advertising revenue’ and the company believes transparency is the best way to protect voters from malicious political ads.

‘There are a number of challenges you’ve raised and we need to do better,’ he said, but added that, for people outside the political mainstream, the combination of Facebook pages and advertising on the platform is ‘a powerful tool of free speech’.

The solution, he claimed, is greater transparency around who is paying for political adverts on Facebook and making the content of those adverts visible to everyone. 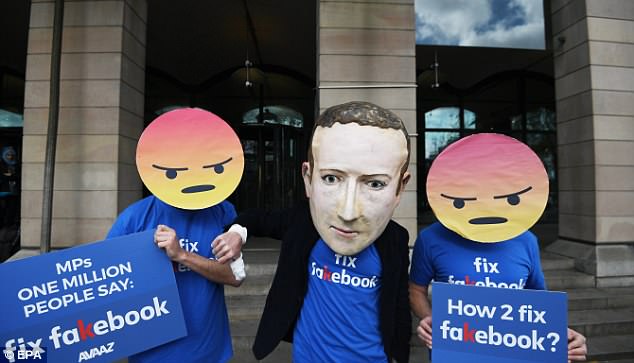 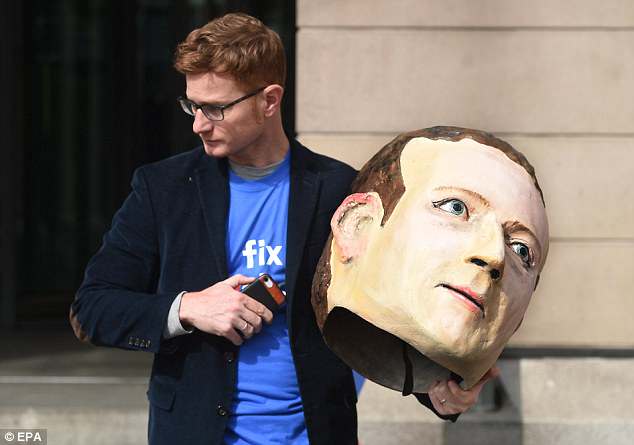 What are the accusations against Cambridge Analytica?

Who are Cambridge Analytica?

The firm, which has offices in London, New York and Washington, boasts to clients that it can ‘find your voters and move them to action’.

What are their ties to Aleksandr Kogan?

The controversy centres around their use of the GSR app, developed by the Cambridge University research Dr Aleksandr Kogan.

Facebook users used the app to answer a personality survey which plundered the data of 100million users.

How was Cambridge Analytica  used in the Brexit and Trump campaigns?

It has been claimed that Cambridge Analytica used the information to assess peoples’ personalities and come up with political strategies to sway voters to back Brexit and Donald Trump.

The firm has insisted it did no actual work for the Brexit campaign – although it did pitch for work with Leave.EU.

But whistleblowers say that Arron Banks – the co founder of Leave.EU – used the ideas gleaned from the itch to pursue his own CA-style model to predict and influence voters’ behaviour in the EU referendum.

Cambridge Analytica suspended its chief executive, Alexander Nix, after recordings emerged of him making a series of controversial claims.

Why was Vote Leave embroiled in the scandal?

It is also claimed that campaign chiefs at Vote Leave – the official pro Brexit campaign group – may have broken the law in the campaign.

It is claimed that they donated £650,000 to the other pro Brexit group BeLeave in the final days of the campaign and told them to spend it on data advertising by the Canadian firm Aggregate IQ – breaking election rules.

In written evidence provided before the hearing, Mr Schroepfer detailed plans to create a ‘searchable archive’ of political adverts in time for the UK local elections in May 2019.

In other exchanges, Mr Schroepfer said he is ‘disappointed’ by the social media giant’s handling of Russian disinformation campaigns on the platform.

Facing a grilling about political advertising by committee chair Damian Collins, Mr Schroepfer said: ‘We were slow to understand the impact at the time and I am way more disappointed in this than you are.’

‘I’m sorry, I shouldn’t have said that,’ the Facebook executive replied. ‘It’s something we’re working very hard on.’

Mr Schroepfer stressed how Facebook is pursuing technological solutions to malicious behaviour on its platform, where the company is ‘trying to catch these things proactively’.

He said: ‘We want to get to a mode where people reporting bad content of any kind is the defence of last resort and the vast majority of stuff is caught up front by automated systems.’

For much of its history, Facebook representatives had stressed a programme of users reporting misbehaviour on the platform – such as illegal activity, hate speech, abuse, nudity and disinformation – rather than actively policing the network themselves.

On Tuesday the committee heard from Aleksandr Kogan, an academic researcher who collected data from millions of Facebook users, including more than a million Britons, and gave it to CA, in breach of Facebook’s terms of service.

Mr Schroepfer insisted the data collected by Dr Kogan was not used by AIQ, which instead used ’email lists’ to target British voters on Facebook on behalf of Brexit campaign groups.

Facebook shares climbed more than 5 per cent after the market closed last night as it reported sales of £8.5billion for the start of 2018.

It represented a revenue boost of nearly 50 per cent at the tech giant – which is now raking in £96million a day – for the three months to the end of March.