A YouTube boss was today accused of shocking incompetence after he was unable to explain why far-Right videos were still online 15 months after they were flagged.

MPs today tore into the social media giant for failing to take down videos which radicalise and foster hate among its viewers despite repeated promises.

William McCants, global policy lead for counter terrorism at YouTube, was left unable to answer questions as he was grilled by politicians about the videos.

But in a car-crash evidence session he was unable to say if it was YouTube staff who failed to take down the videos or contractors, or where in the world the staff were based.

Labour MP Yvette Cooper, chairwoman of the Home Affairs Select Committee, tore into the media giant for its woeful evidence.

William McCants, global policy lead for counter terrorism at YouTube, was left unable to answer questions as he was grilled by politicians about the videos.

‘The failing is not simply an accident…the evidence you have given us today is so weak it looks like a failure to do even the basic checks along the way.

‘We are extremely disappointed by the evidence that you have given

‘Frankly the richest organisation in the world should be  able to do a better job than this.’

Earlier in the session she had said it is ‘shocking’ that the YouTube chief does not know where in the world his review teams are based.

And she slammed YouTube for not doing enough to take down the material and warned him: ‘You have given us many assurances and promises, the reason we have called you is YouTube has failed to live up to those assurances.’

Mr McCants apologised and insisted it was his ‘personal mission’ to get rid of the hate-filled videos.

But he was left unable to answer basic questions about what training moderators are given to spot and take down videos.

Labour MP Stephen Doughty confronted the YouTube chief about why he was able to find reams of video from far right groups this morning – despite assurances by the tech giant that they are taking them down.

He handed the executive a stack of paper of videos he found this morning – including  a video of masked member of the Red Hand of Ulster. 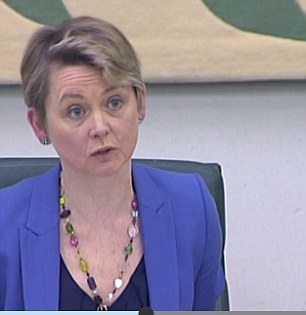 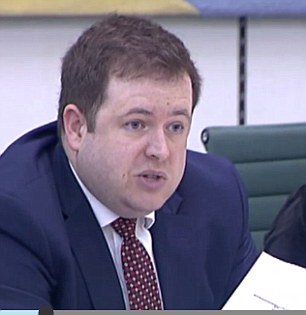 Mr Doughty added: ‘Clearly the training and methods yo are using are completely crap because this morning I’ve been searching for proscribed Northern Irish organisations and have found multiple examples yet again despite having raised them with your organisation a few weeks ago.’

‘We are working around the clock to remove this material.’

But Mr Doughty shot back: ‘You are clearly not working around the clock because the material is still up there on your platform.

‘What did that member of staff do after they appeared here and we raised these concerns with them?’ 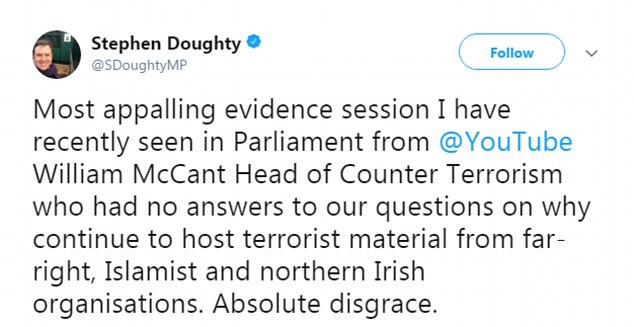 Tory MP Rehman Christi tore into the YouTube chief and suggested he should stand down in six months if things do not improve.

Labour MP and fellow committee member Naz Shah also piled in, saying: ‘It’s a cancer in society is terrorism you are not putting in the effort in to solve it.

‘And frankly I feel insulted that YouTube have sent you to answer the questions…that an organisation as big as YouTube sent somebody who doesn’t know the answers to basic questions. and you have had a week  to prepare.’

In a tweet sent after the session, Mr Doughty said: ‘Most appalling evidence session I have recently seen in Parliament from

‘William McCant Head of Counter Terrorism who had no answers to our questions on why continue to host terrorist material from far-right, Islamist and northern Irish organisations. Absolute disgrace.’