It was an historic moment as British MPs sat in a ‘virtual Parliament’ for the first time ever as the coronavirus pandemic rages in Britain.

But politicians taking part in Prime Minister’s Questions from the safety and comfort of their own homes were upstaged by their grandchildren and their interior design sense – or lack of it.

Only 50 MPs were allowed in the House of Commons chamber as Dominic Raab faced off against new Labour Leader Sir Keir Starmer in a rather more serene atmosphere than the usual cacophonous wall of noise.

The rest tuned in and were able to ask questions via Zoom, thanks to work overseen by Speaker Sir Lindsay Hoyle, providing a sneak glimpse into their homes in their constituencies.

Elsewhere  SNP Westminster Leader Ian Blackford showed off his balls: behind him in shot as he asked a question were signed memorabilia from his beloved Hibernian, including two signed footballs.

And while many MPs including Stephen Crabb and Angela Eagle showed off their bookcases, Don Valley MP Nick Fletcher treated viewers to his floral wallpaper, which complemented his choice of suit.

Acting Liberal Democrat leader Ed Davey attracted comment for his choice in art, while Labour’s Stephen Kinnock adapted to the occasion by following the action using his tablet propped up by a pair of trainers.

Overall the technology appeared to work well, but the session was not without technical problems. David Mundell, the Tory former Scottish Secretary, was due to ask a question but Speaker Lindsay Hoyle informed MPs ‘we have been unable to connect’ to his home in his Dumfriesshire, Clydesdale and Tweeddale seat.

Peter Bone was later cut off as he finished asking a question about the behaviour of the banks, with Mr Raab smiling and saying he had got ‘the gist’ of the question. 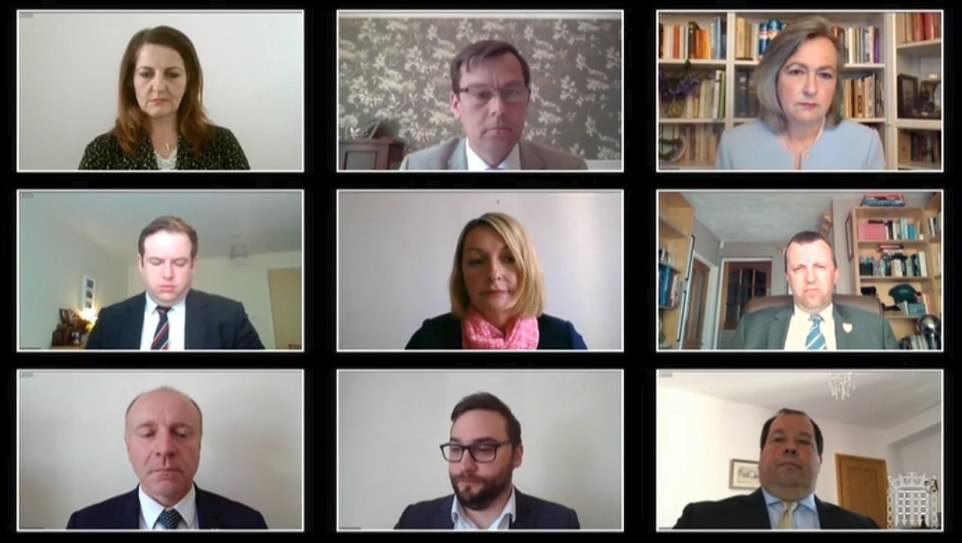 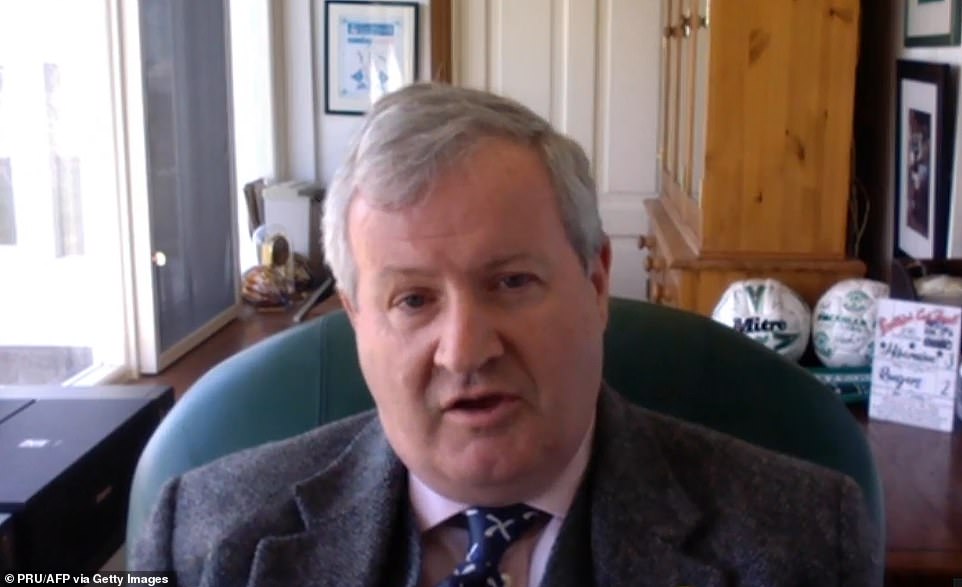 SNP Westminster Leader Ian Blackford showing off signed memorabilia from his beloved Hibernian, with two footballs clearly seen behind him 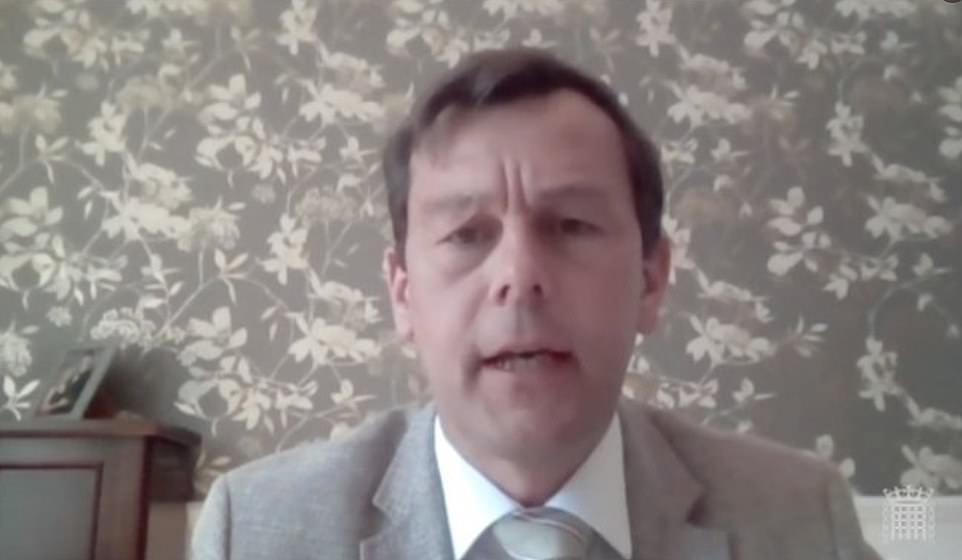 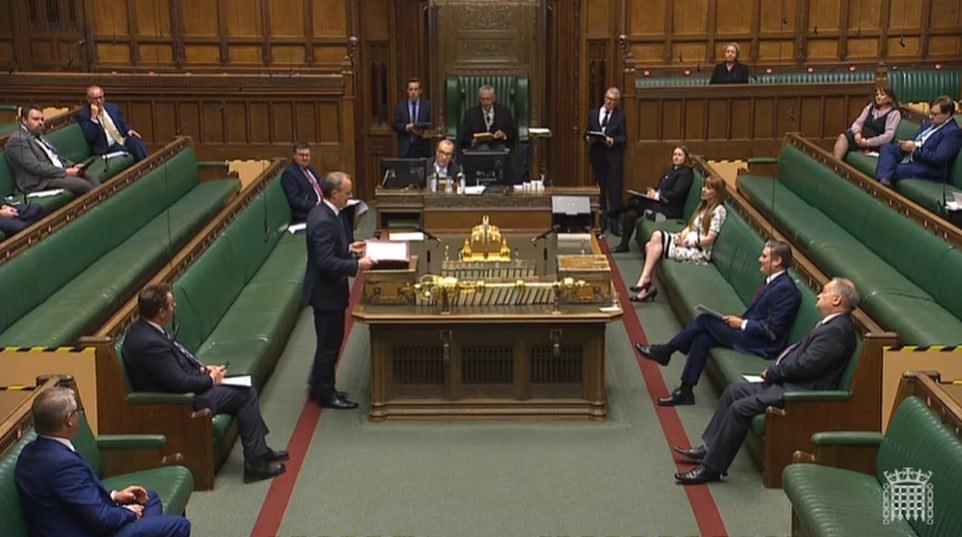 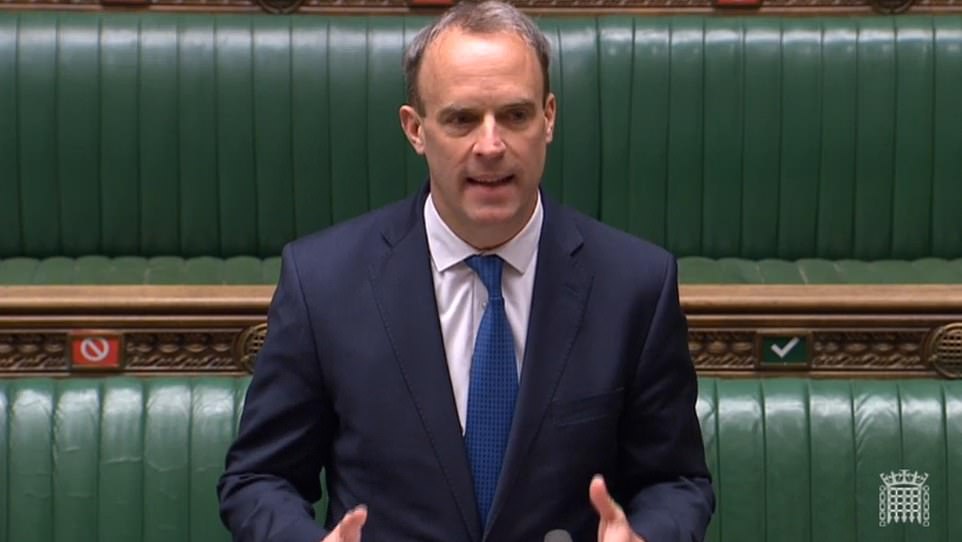 Taking the place of Mr Johnson, who is recovering from coronavirus at Chequers, Mr Raab said the PM was ‘making a good recovery and is in good spirits’ 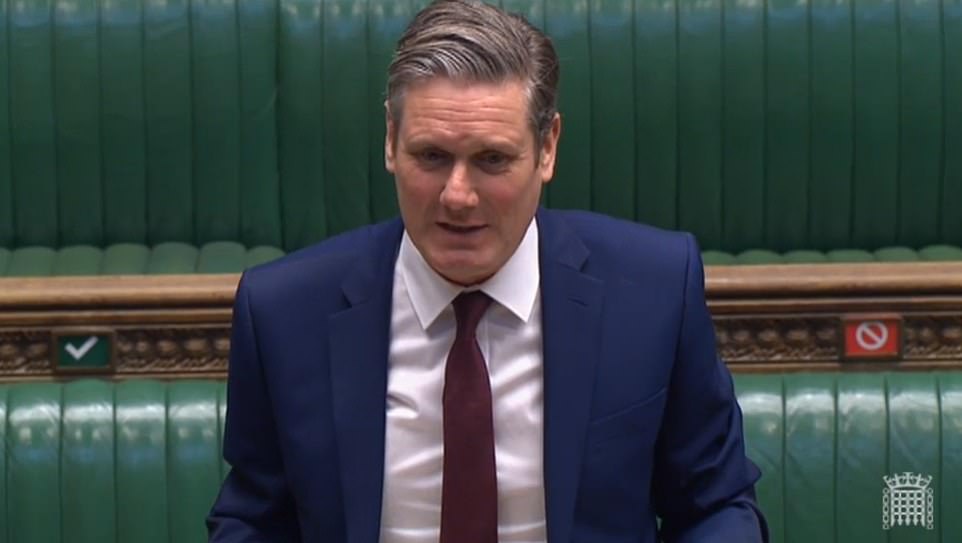 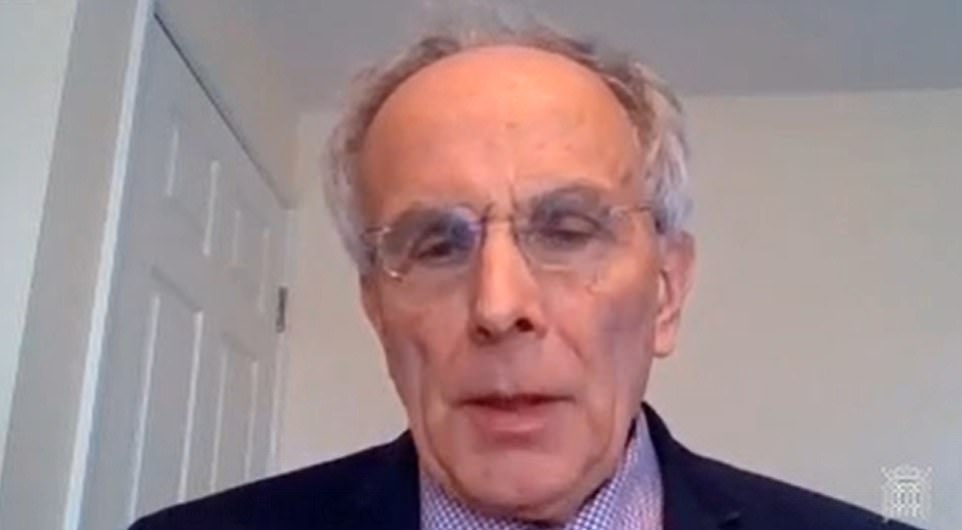 Peter Bone was later cut off as he finished asking a question about the behaviour of the banks, with Mr Raab smiling and saying he had got ‘the gist’ of the question 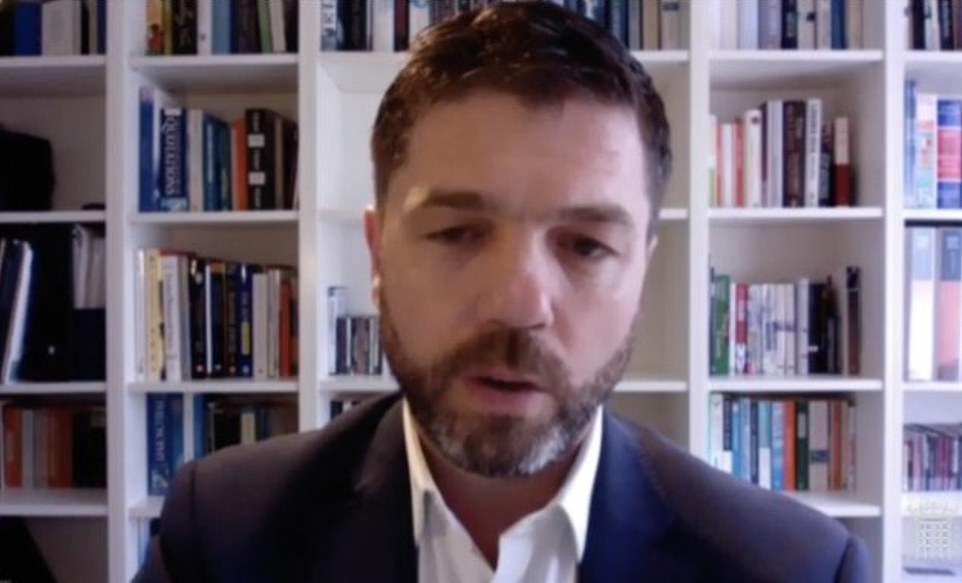 Order in the house! Conservative politician Stephen Crabb was one of  several MPs to position himself in front of a bookcase to ask a question during PMQs 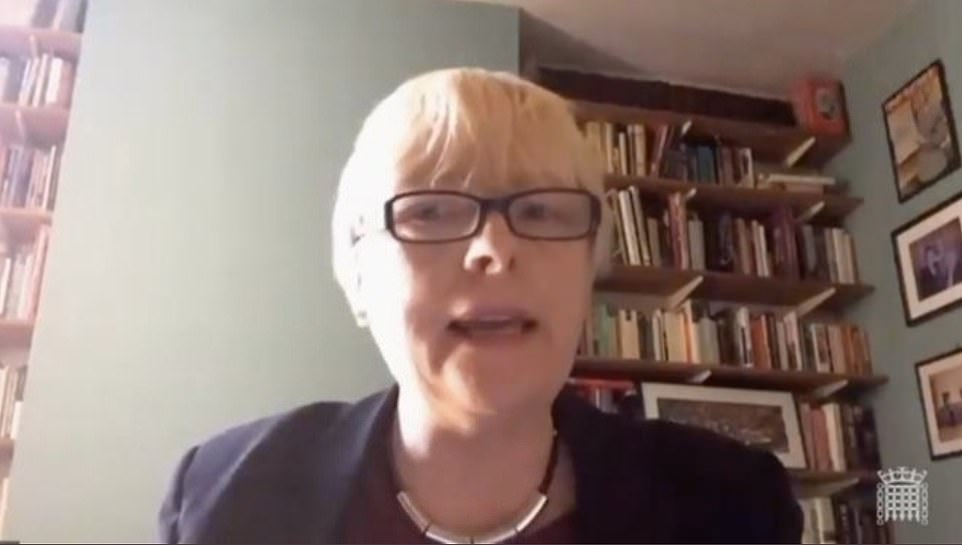 Angela Eagle, Labour MP for Wallasey and a former minister, also went for the bookshelf look at her home in Wirral 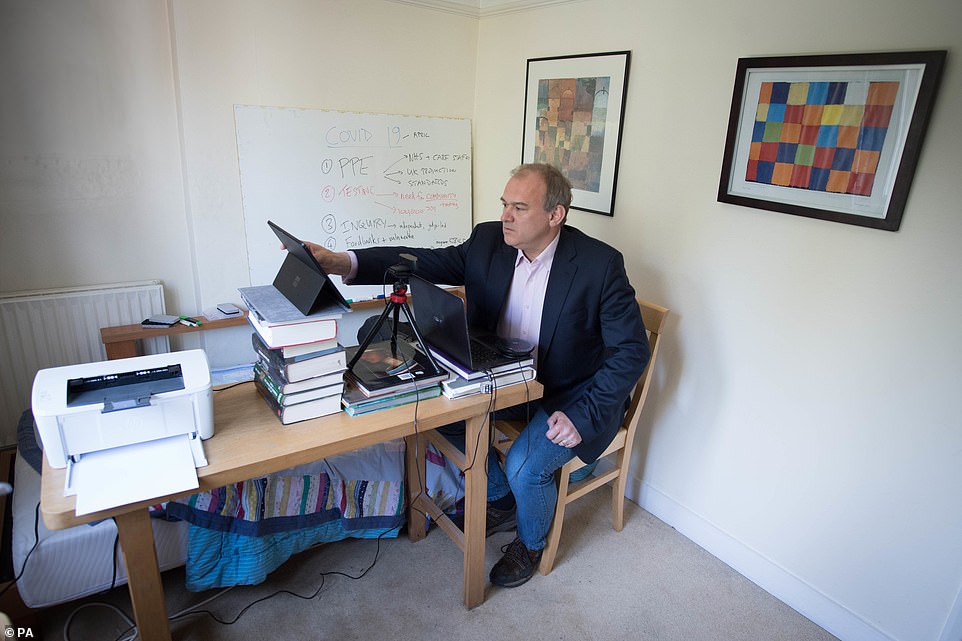 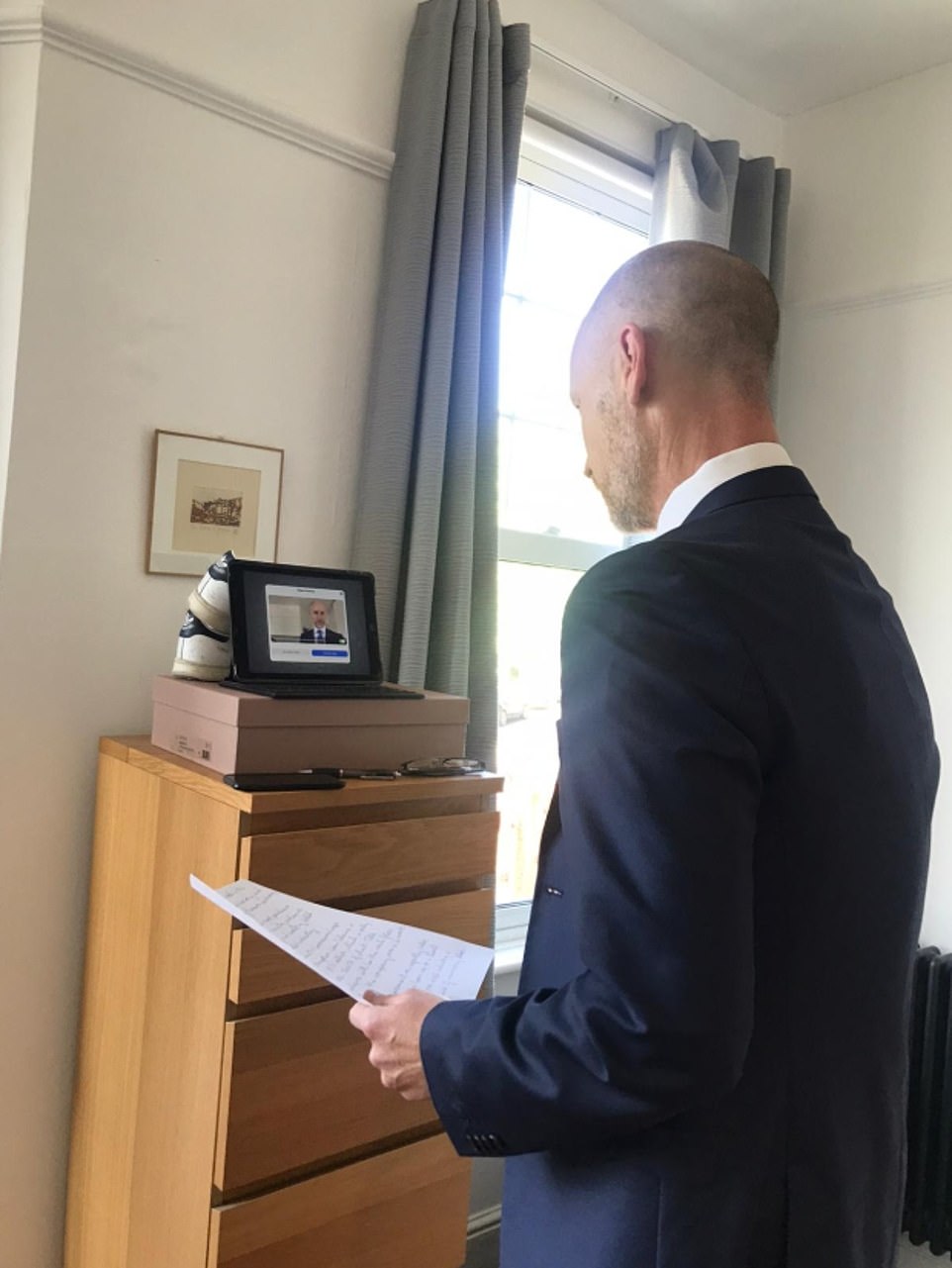 The UK has announced 759 more hospital deaths from the coronavirus today, taking Britain’s total number of victims to 18,094.

And Health Secretary Matt Hancock says the country is in the ‘peak’ of the virus outbreak and authorities are watching with bated breath for the statistics to fall.

He claimed capacity for testing and contact-tracing – tracking down people close to infected patients – is being ‘ramped up’ for the UK to start to move out of lockdown when the time is right.

A further 665 people have died in England’s NHS hospitals and more deaths were recorded in Scotland, Wales and Northern Ireland overnight.

More confusion has emerged over Department of Health handling of statistics as the true increase from yesterday was 763 but a spokesperson could not account for the four missing from the official count.

An estimate based on wider-ranging statistics has claimed the coronavirus outbreak may have killed more than 41,000 people already when non-hospital deaths are included.

An analysis of backdated data by the Financial Times has predicted that, by the time care home deaths and unrecorded hospital fatalities are added up, it could emerge that 41,102 people had died by April 21. The official toll was 17,337.

Meanwhile the National Records of Scotland revealed in a bombshell report today that the true scale of its coronavirus deaths is 79 per cent larger than government statistics show – a third of all people dying with the virus are dying in care homes.

The National Records data adjusted the total number of victims in Scotland to 1,616, by which time only 903 had been officially announced. 537 of them died in homes.

Much of his question broadcast in the chamber from his Cardiff West constituency was inaudible, which prompted some laughter.

Speaker Sir Lindsay said: ‘I hope the Secretary of State can make the most of that question, the line did go down.’

Mr Hart said he got the ‘general gist’ of the question about the coronavirus.

Taking the place of Mr Johnson at PMQs, who is recovering from coronavirus at Chequers, Mr Raab said the PM was ‘making a good recovery and is in good spirits’.

After saying the nation owed a ‘debt of gratitude’ to the NHS he added: ‘Thank you Mr Speaker for all your efforts to ensure parliament can meet and apply the scrutiny to the government that we expect and we embrace.

‘This house meets in challenging times, together we can and we will defeat this virus.’

Taking to his feet for the first time, Sir Keir sent his best wishes ‘for a full and speedy recovery’ to Mr Johnson.

But he soon got down to business, laying into the Government’s testing figures.

‘Because that means that the day before yesterday, 40,000 tests could have been carried but only 18,000 tests were actually carried out.

‘Now, all week I heard from the frontline, from care workers who are frankly desperate for tests for their residents and for themselves, desperate.

‘They would expect every test to be used every day for those that need them.’

Mr Raab replied: ‘It is about demand, we need to encourage those who are able to take the test to come forward.

David Mundell, the Tory former Scottish Secretary, was due to ask a question but Speaker Lindsay Hoyle informed MPs ‘we have been unable to connect’ to his home in his Dumfriesshire, Clydesdale and Tweeddale seat 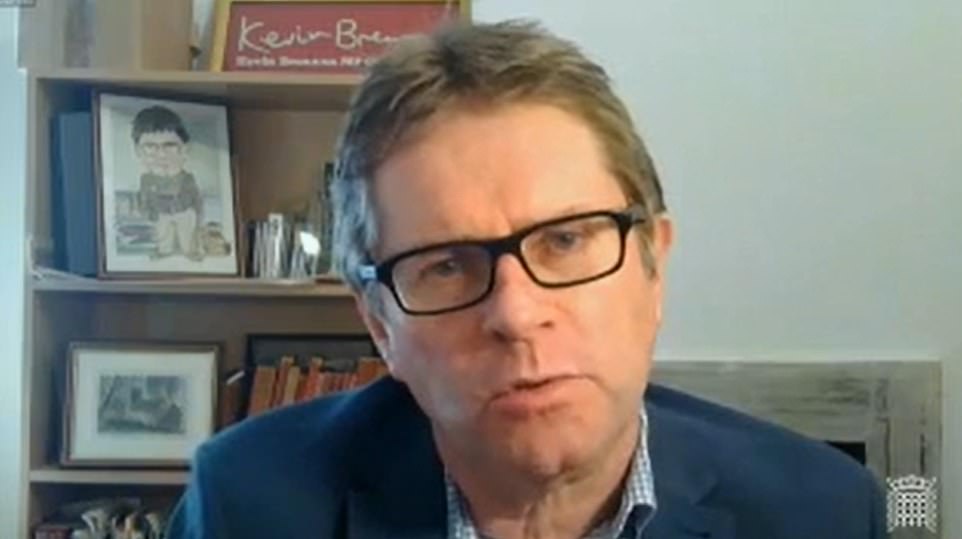 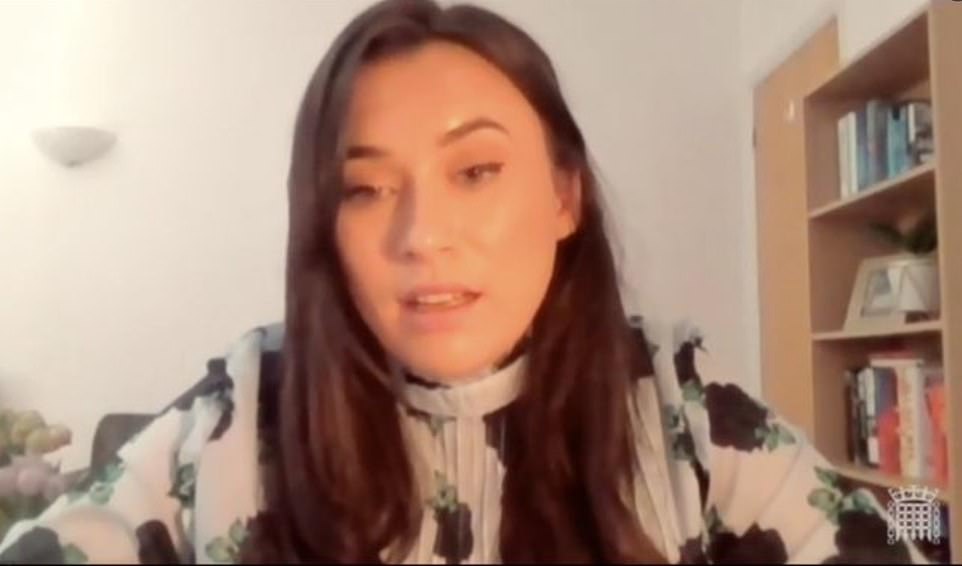 ‘He is right to say it is also about distribution, and some of the logistical and frankly transport challenges that people, particularly some of those that he described, will have in terms of getting to the tests.

‘We are working with the local resilience forums to make sure that we can distribute the tests as effectively as possible.

‘I do think it is important to have a target and to drive towards a target. We are making good progress, we’re confident we’ll meet it.’

Mr Raab replied: ‘On the latest figures, my understanding is that 69 people have died within the NHS of coronavirus. I don’t have the precise figure for care homes, they’re more difficult to establish in relation to care home workers as opposed to care home residents.’

After their to-and-fro it was the chance for smaller party leaders and backbench MPs to ask questions of Mr Raab. 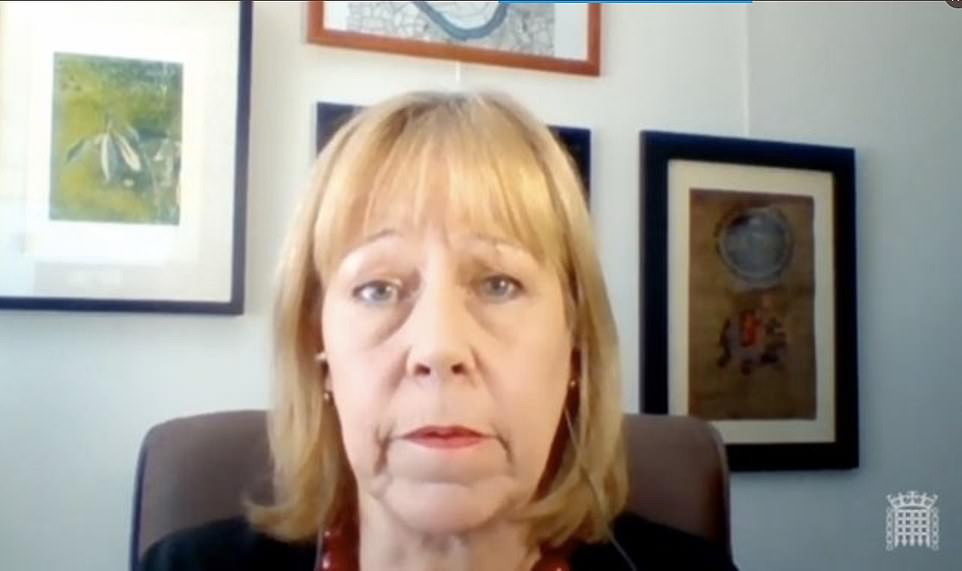 Labour MP Yvette Cooper seen during the ‘hybrid’ sitting, with a white wall with a door visible in the background

And viewers tuning in to watch the debate live were treated to a little insight into their lives at home with sporting memorabilia, sketched comedy caricatures, traditional upholstery and some bold wallpaper among the highlights.

Labour MP Stephen Kinnock even offered his own alternative take on the term ‘cabinet business’, balancing his iPad against a pair of Adidas trainers on a chest of drawers.

While many MPs chose to play it safe and appear in front of a pedestrian-looking white wall, others clearly chose the backdrop to reflect a little of their personality.

Hastings and Rye Tory MP Sally-Ann Hart appeared in front of a gold-framed oil painting, a brass candelabra and some luxurious-looking curtains as she asked a question remotely during Prime Minister’s Questions.

Meanwhile Brentford and Isleworth Labour MP Ruth Cadbury showed off her passion for art with a series of paintings and a map of the Thames – a stone’s throw from where she lives – as she joined the Commons sitting.

Perhaps wishing to show off just how busy life as an MP is, there were a fair amount of cluttered cabinets showing official papers stacked up in folders.

And of course, there were plenty of bookshelves, offering a high-brow background for those looking to create the right impression to their colleagues.