The government dramatically saw off a revolt over ditching the virtual Commons tonight after hundreds of MPs conducted a chaotic mile-long ‘conga’ through Parliament to vote.

Amid extraordinary scenes, Speaker Lindsay Hoyle urged politicians to ‘keep coming’ and berated them for dawdling as they trotted around the estate and filed through a series of pens in Westminster Hall before entering the Commons chamber to confirm their name and whether they wanted to vote ‘Aye’ or ‘Noe’.

Angry MPs took selfies and grumbled as they waited their turn, branding the 44-minute process – three times as long as normal – a ‘farce’ and saying it would be dark before they finished.

A ‘hybrid’ system to allow politicians to contribute to proceedings via Zoom while some remain in the chamber has been dropped on the return from recess, along with e-voting.

Leader of the House Mr Rees-Mogg told the Commons this afternoon the ‘halfway’ arrangements could not continue. ‘What was unacceptable for a few short weeks would have proved unsustainable if we had allowed the hybrid proceedings to continue,’ he said. ‘Voting while enjoying a sunny walk or whilst watching television do democracy an injustice.’

The government saw off an amendment that would have kept electronic voting by 242 to 185.

But MPs across parties with children or staying home for health conditions have been incensed by the new scheme, with one jibing that unlike wealthy Mr Rees-Mogg ‘not all of us have live-in nannies’. Lib Dem MP Munira Wilson said she was being made to ‘put my husband who’s on immuno-suppressants at greater risk’.

The independent equality watchdog added its voice to the condemnation this afternoon, saying those shielding were being ‘disadvantaged’.

The bruising spat came as: 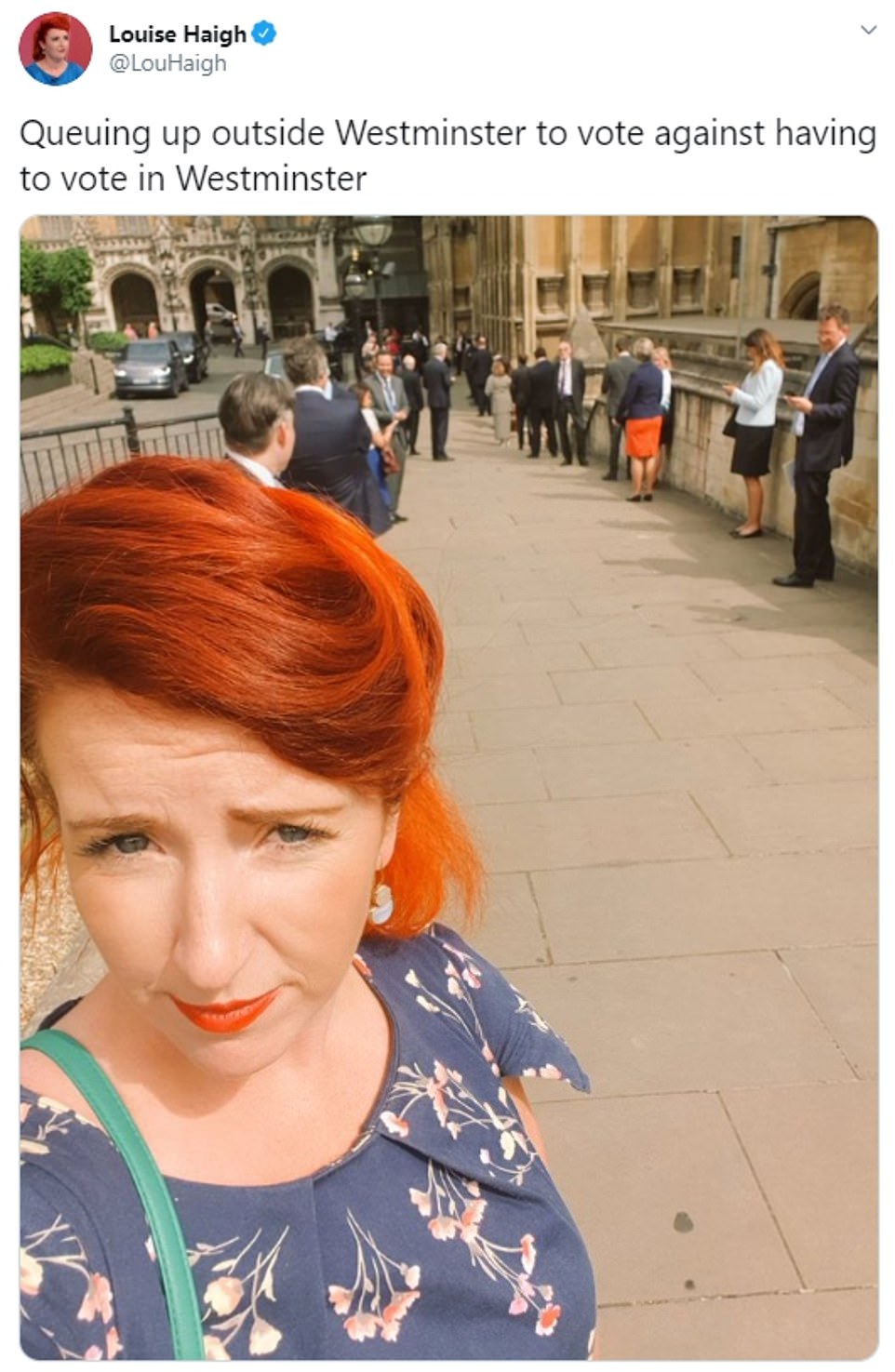 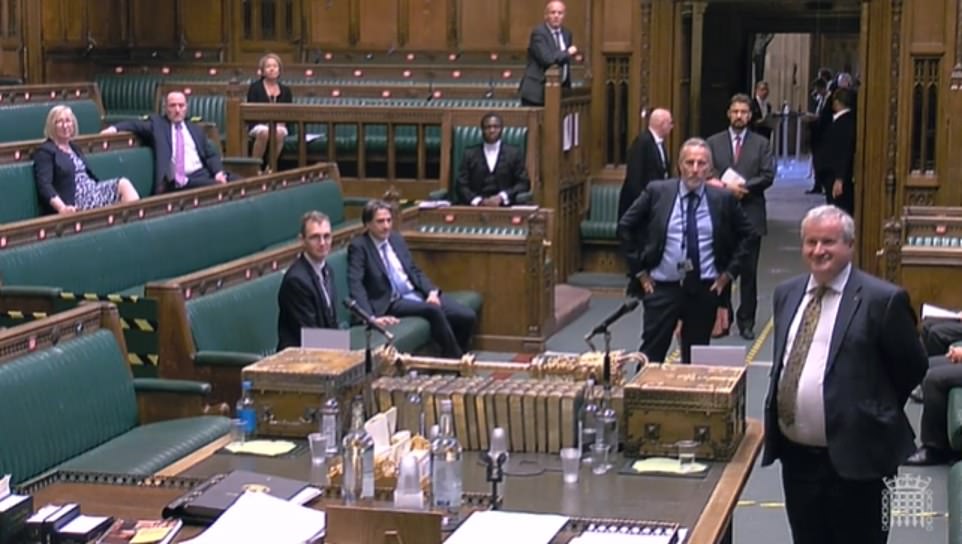 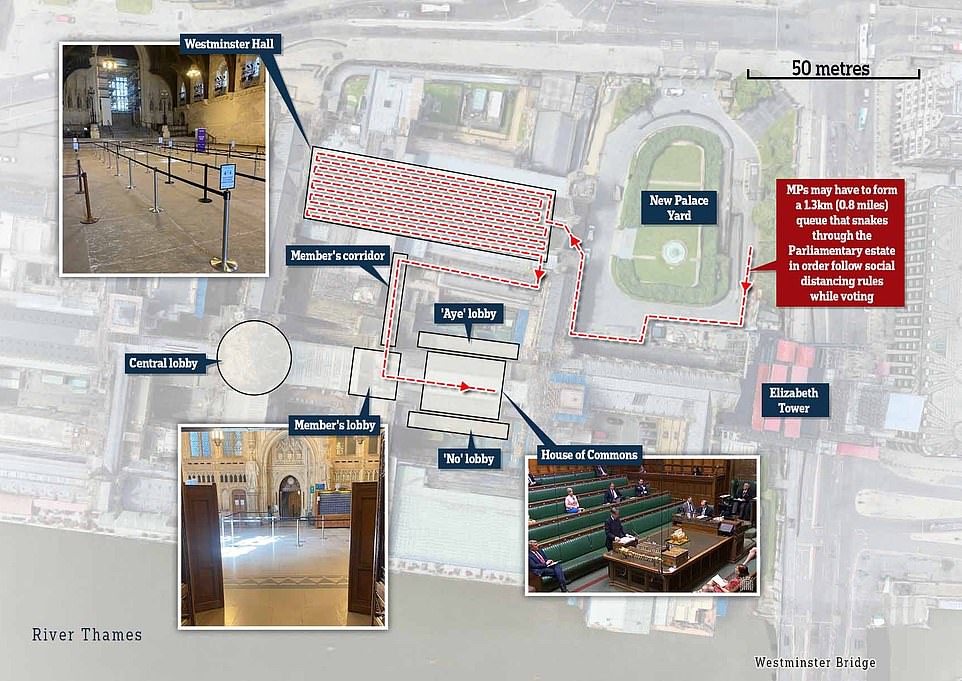 Commons votes today will involve a socially-distanced queue that could stretch for nearly a mile around the estate, rather than using the usual rammed division lobbies 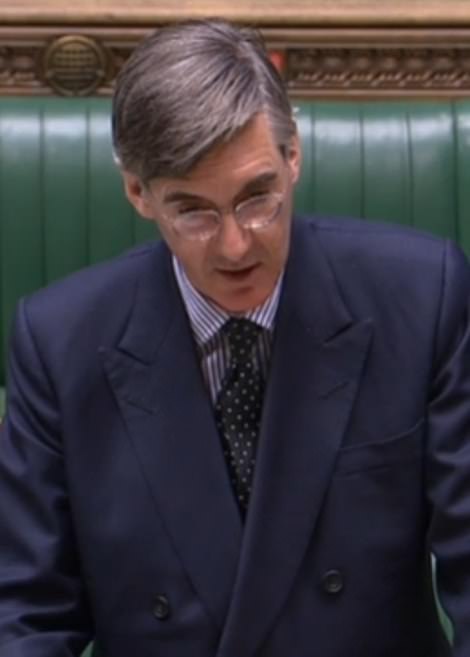 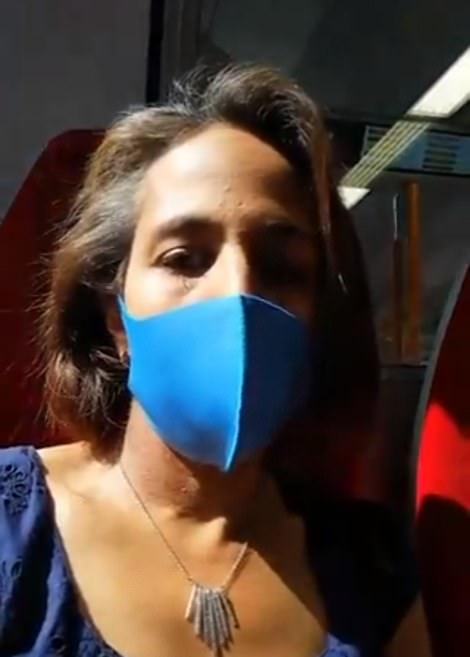 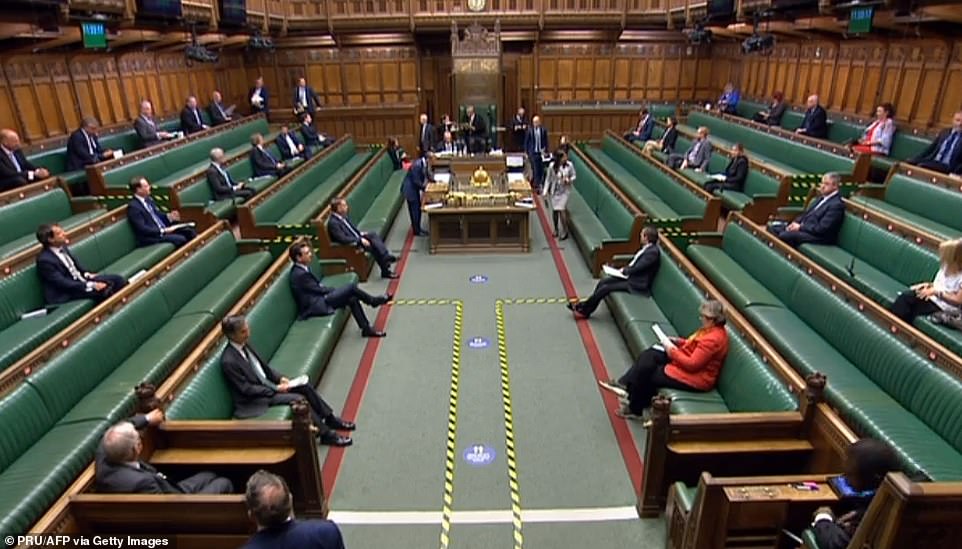 The equalities watchdog has criticised plans to end electronic voting in Parliament during coronavirus lockdown.

The Equality and Human Rights Commission (EHRC) has written to all MPs warning the move ‘will place at significant disadvantage MPs who are shielding or self-isolating’.

Ahead of the vote on the Government plan, EHRC chief executive Rebecca Hilsenrath wrote: ‘I’m getting in touch to raise our concern that proceedings in Parliament must remain fully inclusive during the coronavirus pandemic.

‘We are concerned by the announcement today from the Leader of the House of Commons which implies that Parliament may proceed without provision for the remote participation of Members who are unable to travel to Westminster because of the pandemic.

‘This will place at significant disadvantage MPs who are shielding or self-isolating because of age, disability, health conditions or pregnancy, as well as other Members who will struggle to attend the chamber in person due to travel restrictions and caring responsibilities.

‘It cannot be right for Parliament to proceed without provision for remote participation when many elected representatives cannot attend in person.

‘We ask the Government and Members of the House to show leadership in championing equality and non-discrimination and to ensure that, when deciding future procedure tomorrow, Parliament remains inclusive and effective in making the decisions that affect us all.’

Before the voting kicked off, Sir Lindsay said the House had the power to decide its own rules. ‘My sympathy is with those shielding or of a certain age who cannot attend the House,’ he said.

One Tory MP told MailOnline that forcing MPs to Westminster with little legislation to consider during lockdown will leave them isolated and might mean they drink alone in offices.

A motion on changing the procedures was voted on this afternoon using temporary measures brought in by Sir Lindsay.

It saw a socially-distanced queue stretching for nearly a mile around the estate, rather than using the usual rammed division lobbies.

Mr Rees-Mogg announced last month that the Government was pushing ahead with plans for a physical-only Commons after the Whitsun recess.

The motion today prevents the resumption of virtual voting that allowed MPs to have their say from afar during the pandemic.

Mr Rees-Mogg argued that democracy would ‘once again flourish’, having been ‘curtailed under the hybrid halfway house’ which allowed MPs to take part in debates and vote remotely while up to 50 were in the chamber.

He insisted that the Government is working to establish how shielding MPs could continue to take part. However, sources confirmed it will be to contribute to debates rather than vote, and will rely on finding a solutions that is ‘technologically possible’.

The proposal have faced fierce criticism – with the Electoral Reform Society warning it poses a ‘real threat for democratic representation and political equality’ if extremely vulnerable MPs are unable to vote.

An amendment tabled by Karen Bradley, chair of the Prodedure Commit, would have retained remote voting.

Former minister Robert Halfon, who is in the shielding category, said the proposals were ‘absolutely not right and democratically unjust’. He has complained that those unable to attend will be turned into ‘parliamentary eunuchs’.

Labour MP Luke Pollard was even more blunt, posting a video saying the plans were ‘a bit sh**’.

‘Those who can physically attend and those unable to owing to the Government’s own rules, including having an underlying health condition or shielding responsibilities.’

Tories claim Labour has been refusing to ‘pair’ large numbers of MPs because it believes it has a chance of defeating the government this afternoon. In a sign of desperation, Whips have reportedly been telling Conservatvie MPs that they should not cave in to pressure from people who want to stop Brexit.

One senior Tory MP warned that forcing people to attend Parliament even if there is not much business could result in a rise in drinking.

The MP said: ‘If people are stuck up in their offices all afternoon before an evening vote, it’s a hot day and the windows are open. ”Ooh, we’ll crack open a bottle of Sauvignon. Oh, that slipped down rather well, we’ll have another one.”

‘There could be one or two scenes.’

Sir Lindsay has said votes today will be conducted by filing past the left side of the despatch box table to vote Aye, and to the right side to vote No. They will pause at the despatch box to state their name and voting intention.

Votes on subsequent days will be carried out under the arrangements agreed by MPs. 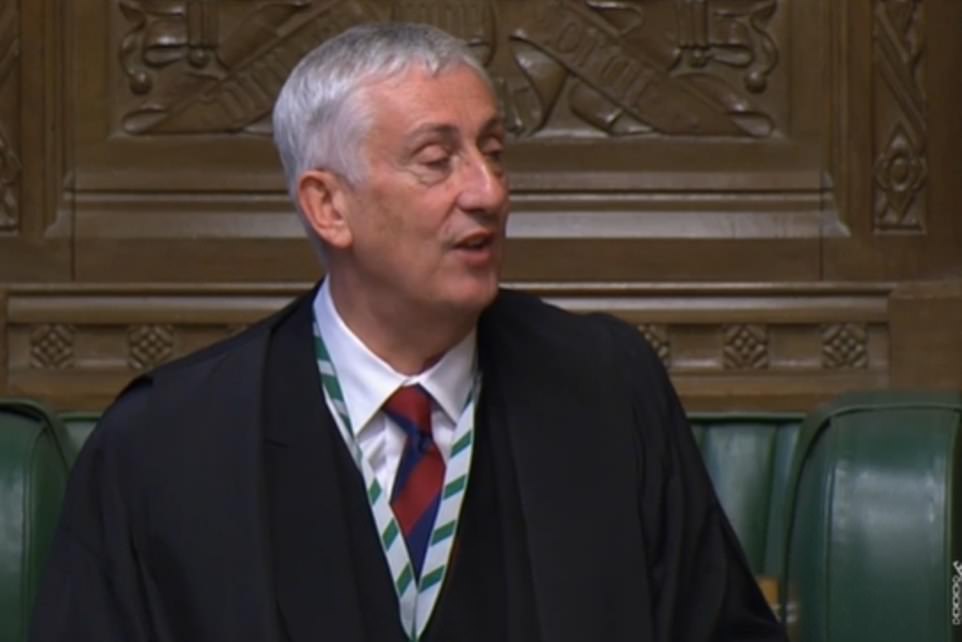 Sir Lindsay Hoyle (pictured today) has said votes will be conducted by filing past the left side of the despatch box table to vote Aye, and to the right side to vote No

Senior Tories have complained that Sir Lindsay was ‘more keen than we were’ to resume physical voting, and initially regarded hybrid voting as ‘impossible’, but changed his stance after taking soundings from MPs.

Sir Lindsay said it was ‘clear’ that the House cannot conduct divisions safely via the usual voting lobbies, as it would be ‘difficult to maintain social distancing’.

MPs will be asked to only attend the chamber when they are listed to be called to speak during a particular proceeding.

In a statement, Sir Lindsay said: ‘While we will return to fully physical proceedings in the House tomorrow – they will not be the same as before.

‘Ideally, I would have liked the Government and Opposition to have reached agreement on how we should conduct our proceedings and voting procedures – unfortunately this has not been forthcoming.

‘As remote voting has lapsed and Public Health England have deemed our Division lobbies unsafe, I have had to devise a temporary way forward to break the deadlock – because the House must be able to have its say.

‘It is not perfect, it will take time, and Members will need to be patient. But, it is the safest method I can think of to enable Members and supporting staff to maintain social distancing.

‘However, I still remain hopeful that colleagues will agree on a method of participation that enables all Members to take part, especially those who are shielding, vulnerable or have caring responsibilities.’