MPs return to parliament today after weeks of Zoom debates

MPs will return to Westminster today despite politicians claiming plans for voting queues snaking up to a mile will make them ‘look like the stupidest parliament in the world’.

Arrangements allowing them to debate and e-vote in a ‘virtual Commons’ online since April have now come to an end.

Instead up to 50 MPs will be allowed in the chamber because of social distancing but the rest of them should also return to London if it is safe for them to do so.

The Government is facing a major revolt over its plans to scrap the virtual coronavirus Parliament after it emerged MPs will have to form a Commons ‘conga’ line up to a mile long in order to vote.

Commons Leader Jacob Rees-Mogg tabled a motion yesterday preventing the resumption of virtual voting, which allowed MPs to have their say from afar during the pandemic.

If the House approves the plan today, MPs will have to come back and may have to form long queues in order to obey social distancing rules when voting – despite the Lords planning a move completely online.

Labour MP Chris Bryant said: ‘It will be like queuing for the Eiffel Tower. We’ll look like the stupidest parliament in the world.’

Commons Leader Jacob Rees-Mogg tabled a motion on Monday preventing the resumption of virtual voting, which allowed MPs to have their say from afar during the pandemic

The shift has been attacked as a backwards step that could prevent MPs who are elderly or shielding for other reasons from attending.

How will the Commons work when all MPs physically return?

Jacob Rees-Mogg has told MPs they must return to Westminster after the Whitsun recess as he insisted Parliament will be a ‘Covid-19 secure workplace’.

Here are some of the measures which will be taken to get the Commons back up and running:

Others, notably from the Scottish Highlands, also face a long journey on public transport that could be avoided with remote voting.

Senior Tories including Robert Halfon, the chair of the Commons education committee, who is currently shielding, have called for virtual proceedings to continue for those who need them.

Another senior Tory MP said voting under the expected new rules would be like doing the ‘Parliamentary conga’.

He told MailOnline: ‘Some of it is going to be outside. Are we expecting the PM to stand in line? I wonder about the security aspect of all this. Is he going to stand in New Palace Yard?’

Labour and other opposition parties that afternoon tabled an amendment that would allow the current ‘hybrid’ model to be kept.

Shadow leader of the house Valerie Vaz said: ‘Jacob Rees-Mogg’s discriminatory proposals would result in two classes of MPs. Those who can physically attend and those unable to owing to the Government’s own rules, including having an underlying health condition or shielding responsibilities.

‘The abolition of the hybrid remote parliament which allowed all MPs to take part regardless of their personal circumstances is discriminatory and would not be acceptable in any other workplace.

‘We remain ready to work with the Government and all parties to reach a consensus that would allow all MPs to participate on an equal basis.’

Before coronavirus, MPs simply gathered in groups in either the yes or no lobbies outside the Commons chamber.

But during the lockdown electronic voting was trials.  There were some problems with the technology – most notably recording Chancellor Rishi Sunak voting against the Government – but no major problems were reported.

Rees-Mogg argued that democracy would ‘once again flourish’, having been ‘curtailed under the hybrid halfway house’ which allowed MPs to take part in debates and vote remotely while up to 50 were in the chamber.

And he insisted that the Government is working to establish how shielding MPs could continue to take part. 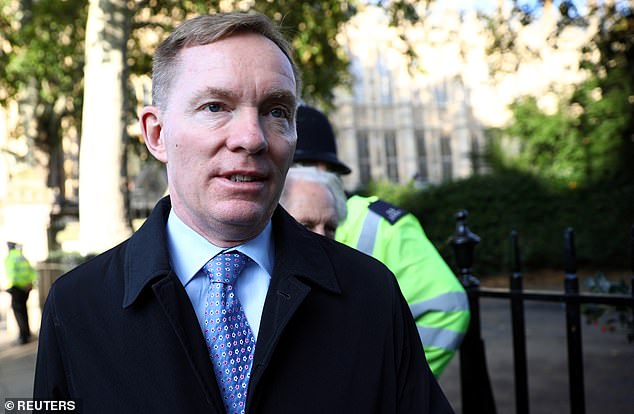 Labour former minister Chris Bryant said: ‘The government should keep remote voting and participation. Otherwise it’s disenfranchising MPs who are shielding and those with families to protect. Democracy can’t be survival of the fittest’ 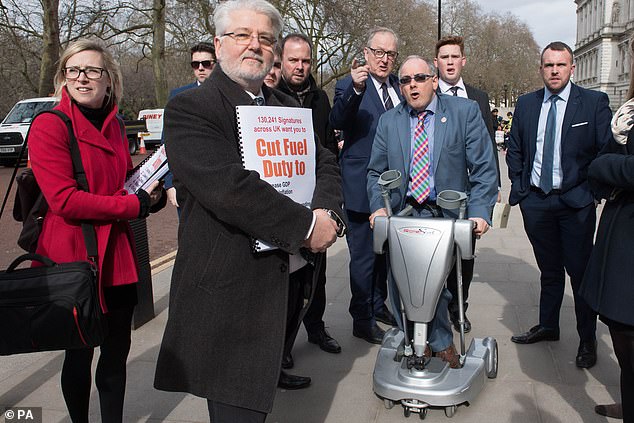 Senior Tories including Robert Halfon (centre right, on the mobility scooter) who is currently shielding, have called for virtual proceedings to continue for those who need them

The Government’s motion requires voting to take place in person at the Palace of Westminster and that MPs must follow Public Health England guidance.

The mechanics of voting would then be left down to Commons Speaker Sir Lindsay Hoyle to set out, with parliamentarians having to avoid the narrow division lobbies.

He has described a single file of MPs snaking through Parliament as a ‘supermarket queue’ that will lead through the centre of the chamber and to the dispatch box.

Mr Rees-Mogg defended the Government plan in The House political magazine, saying that the total numbers on the estate ‘will not increase significantly’, with MPs’ staff continuing to work from home.

‘The virtual Parliament brought us through the peak of the pandemic but it is no longer necessary to make the compromises it demanded. We can do so much better,’ he wrote.

‘In the chamber frontbenchers will have to keep on their toes as interventions are once again made possible. This exceptional aspect of British democracy, curtailed under the hybrid halfway house, can once again flourish.

‘For those MPs with underlying health conditions who have been told to shield or are receiving specific Government advice about their health, the Government is working with the House authorities to see how they can continue to contribute to proceedings within the House.’

The Prime Minister’s official spokesman added today that MPs who need to shield ‘should continue to do so’ and said that informal arrangements such as pairing would be in place to allow this.

The House of Lords is developing a new online voting system for peers expected to be ready by the middle of the month as the Government demands that MPs vote in person despite the coronavirus crisis.

‘We’re developing rapidly a brand new, secure online voting system for the House of Lords,’ a Lords spokesman said. ‘Peers will be able to vote at the touch of a smartphone screen or on a laptop or other device.’

Legal advice from Thompsons Solicitors commissioned by Labour said the plans to scrap the virtual Parliament ‘would be likely to amount to discrimination’ under equality laws if MPs were considered to be employees.

And shadow solicitor general Ellie Reeves added: ‘These proposals are not only a risk to public health, but they also discriminate against MPs who are having to shield from the coronavirus and cannot safely return to work as usual.’

The Electoral Reform Society said: ‘If this goes ahead, it is beyond a farce.

‘It is unacceptable when there is currently a safe, secure and speedy option for voting available: remote/digital voting. MPs have already used it, and it works.

‘Since some MPs are shielding and are not safe to travel in person, these plans – if confirmed – pose a real threat for democratic representation and political equality.’