The Business Secretary was urged last night to block the hostile takeover of GKN on national security grounds.

With just two days to go until the firm’s fate is decided, MPs from all parties called on Greg Clark to intervene to protect UK industry and jobs.

Mr Clark has so far said little on the battle despite mounting concern for the historic engineering firm, which made Spitfires during the Second World War.

The 259-year-old company, which also made cannonballs for the British in the Battle of Waterloo, is under pressure from predator Melrose, which snaps up underperforming businesses and sells them on at a profit.

In the past, Theresa May has signalled that the government will block the takeover if it is not in the national interest.

The Prime Minister told the House of Commons in February: ‘Of course the Business Department will be looking closely and have been following closely the issue that he has raised, and I can ensure him [Labour MP Jack Dromey] that I and the Government as a whole will always act in the UK national interest.’ 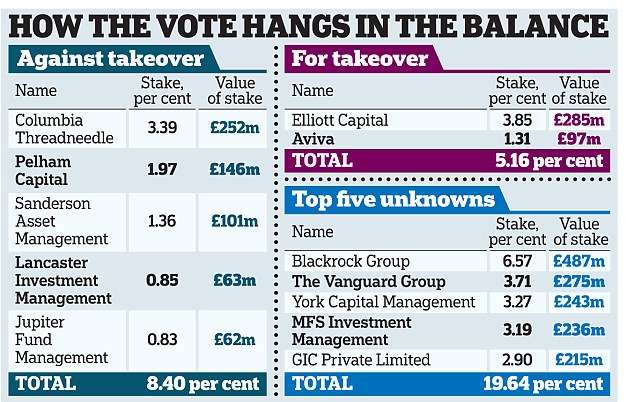 It emerged over the weekend that 25 per cent of GKN’s shares are now held by hedge funds – aggressive speculators seeking to profit from deals. This means its future could rest with a band of ruthless investors with little long-term interest in the firm.

With only two days left until the shareholder vote on Thursday afternoon, MPs ramped up the pressure on Mr Clark.

Tory MP Rachel Maclean, whose constituency includes GKN’s Redditch headquarters, said: ‘I have met Greg Clark and have made my concerns very clear, it is at the top of his agenda.

‘I really want him to listen and if it is the right thing to do, to exercise his power.’ Labour MP Jack Dromey, who has been campaigning against the takeover, said: ‘The failure to intervene would let down the British people and British industry. [Mr] Clark must now not let the country down.’ 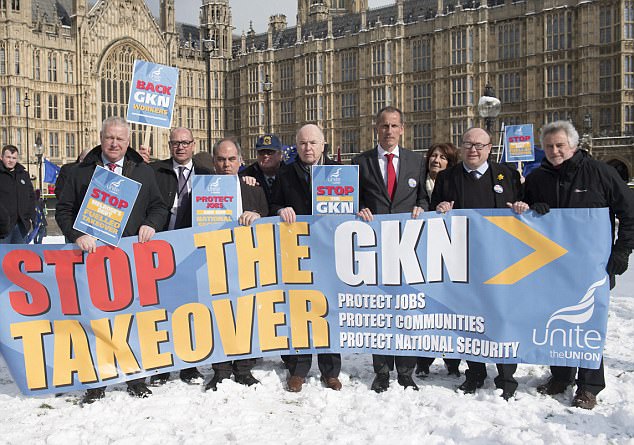 Workers gathered last month to stand against the GKN takeover

Rebecca Long-Bailey, Labour’s shadow business spokesman, said: ‘The Secretary of State for Business has the power to stop this deal. He should use that power now.’

The grounds for the Government to intervene in a takeover bid are limited, though it can step in on national interest fears if they have concerns over security, financial stability or media plurality.

Last month Alex Chisholm, the permanent secretary to the Business Department, said ministers were assessing whether the bid should be blocked over national security. Asked about the issue in Parliament on March 13, Mr Clark said he would look very carefully at evidence given by both Melrose and GKN to an earlier business committee hearing.

However, the future of the firm could be decided by a company based across the Atlantic.

US investment titan Blackrock, which employs former chancellor George Osborne as an adviser, is GKN’s biggest shareholder, with a 6.57 per cent stake worth £487million. 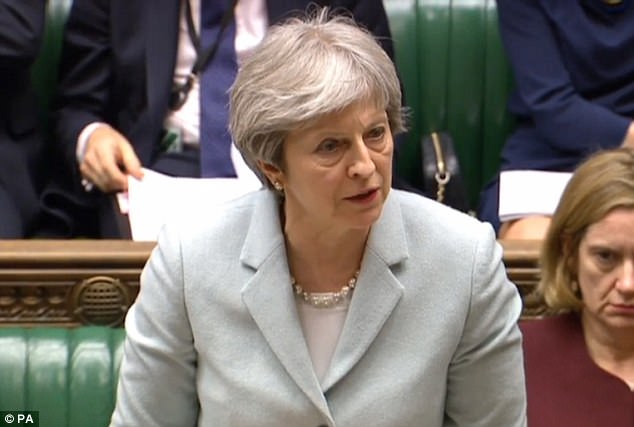 In the past, Theresa May has signalled that the government will block the takeover if it is not in the national interest

It is likely to play a crucial role in the knife-edge vote on whether the firm should be taken over by Melrose.

City insiders believe Blackrock is secretly preparing to support Melrose, in which it is the second-largest shareholder with a 9.38 per cent stake worth £402million.

Its support for Melrose would be embarrassing for Mr Osborne, who talked up Britain’s manufacturing prowess as chancellor.

A Business Department spokesman last night said that because of Mr Clark’s role in the process he could not comment further at this stage.

Melrose has stressed it invests in firms as if it owned them forever. It has said: ‘We believe that Melrose has the right team to transform GKN.’

Blackrock did not respond to a request for comment.