MPs today warned that Donald Trump’s praise for Boris Johnson could backfire in the Tory leadership contest as he is a ‘Marmite’ figure.

The US president paid a glowing tribute to the former foreign secretary as a ‘big power’ and a ‘friend’ at an impromptu press call in Washington yesterday.

He also suggested he could meet Mr Johnson, the favourite to take over from Theresa May in Downing Street, during his long-awaited state visit to the UK next week.

But Mr Johnson’s team have so far stayed tight-lipped about the apparent endorsement, saying only that he has not received an invite to meet the president.

One senior Tory MP insisted they were right to be wary about Mr Trump.

‘I really don’t mind him,’ the MP told MailOnline. ‘But he’s Marmite, isn’t he. You either like him or you don’t.

‘It’s not going to do him any good in the current circumstances. It looks like what it is.’

Mr Johnson is the front runner to take Mrs May’s job this summer after she finally resigned admitting she had failed to deliver Brexit.

But the contest is becoming increasingly chaotic after former chief whip Mark Harper became the twelfth candidate to throw his hat into the ring.

There are also deepning divisions between Tory factions over how to handle Brexit, with Jeremy Hunt and other hopefuls warning that trying to force No Deal would be political ‘suicide’. Mr Johnson, by contrast, has said the UK should leave the bloc by the end of October with or without a deal.

Speaking to reporters on the White House lawn, Donald Trump said he ‘may’ hold talks with Boris Johnson and Nigel Farage during his three-day trip to the UK 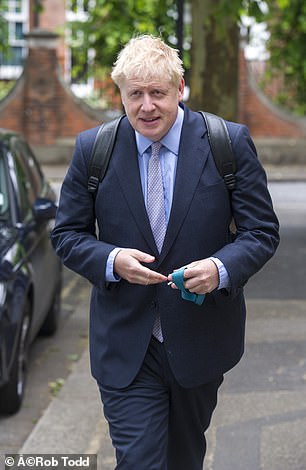 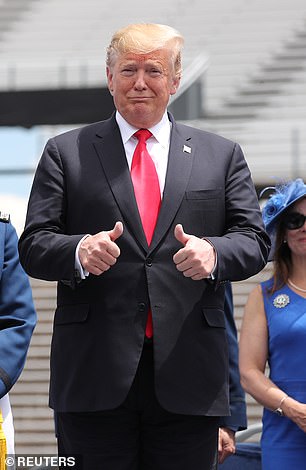 Nigel Farage, who was also praised by Mr Trump, said he would be ‘happy to’ get together with the president, although there are no formal plans in place.

It is understood Mr Johnson has not yet been invited to a meeting.

Speaking to reporters on the White House lawn yesterday, Mr Trump said he ‘may’ hold talks with the pair during his three-day trip.

‘Nigel has had a big victory, he has picked up 32 per cent of the vote starting from nothing (in EU elections).

What is happening during Trump’s state visit to the UK?

The Queen, joined by The Prince of Wales and The Duchess of Cornwall, officially welcome The President and Mrs Trump at Buckingham Palace. Royal Gun Salutes fired in Green Park and at the Tower of London.

Private lunch at Buckingham Palace for the President and First Lady, hosted by Queen with Duke of Sussex

Tour of Westminster Abbey, where President will lay a wreath at the Grave of the Unknown Warrior.

Afternoon tea with the Prince of Wales and the Duchess of Cornwall at Clarence House.

Business breakfast meeting at St James’s Palace with Theresa May and Duke of York.

Talks at No10 Downing Street followed by lunch with Mrs May, and a joint press conference.

President and Mrs Trump host a return dinner at Winfield House, official residence of the US Ambassador.

National Commemorative Event for the 75th anniversary of the D-Day landings in Portsmouth, alongside over 300 D-Day veterans.

Asked if he was supporting Mr Johnson and Mr Farage, Mr Trump said: ‘They are friends of mine but I haven’t thought about supporting them… I have a lot of respect for both of those men.

Mr Farage told MailOnline he would be ‘perfectly happy’ to meet Mr Trump, but no plans were yet in place.

‘We will have to see,’ he said. ‘I would be perfectly happy to, of course I would.

‘I last saw him a couple of months ago on the other side (of the Atlantic).’

It is understood that Mr Johnson – the front runner in the race to take over from Mrs May as PM – has not yet been invited to a meeting.

But a government source said: ‘If you’re the US president and you want to see someone, you find a way to make it happen.’

On his previous visit to the UK last July, Mr Trump embarrassed Mrs May by hailing the qualities of Mr Johnson, who had just resigned as foreign secretary.

The president said Mr Johnson was ‘a very talented guy’ who would make a ‘great prime minister’.

He said at the time: ‘I was very saddened to see he was leaving government and I hope he goes back in at some point. I think he is a great representative for your country.’

Mr Farage was famously the first senior UK politician to meet Mr Trump after he was elected as president – posing together by the golden elevator in his New York penthouse.

There were claims that Mr Trump wanted the MEP to be made the UK ambassador to the US, although the idea was dismissed by the UK government.

Any meetings will have to be slotted into a packed schedule for the Trumps as they are given the full red carpet treatment.

Royal gun salutes will fire at the Tower of London and in Green Park to honour the US President and First Lady Melania Trump.

The Queen, 93, is hosting no fewer than four official events in tribute to Mr Trump, and Prince Charles and the Duke of York will be heavily involved too.

The President will also have lunch with Mrs May at Downing Street in one of her final ceremonial duties as Prime Minister.

Mr Trump is bringing four of his five children with him, including son Barron, 12, and his daughter Ivanka Trump and her husband Jared Kushner. 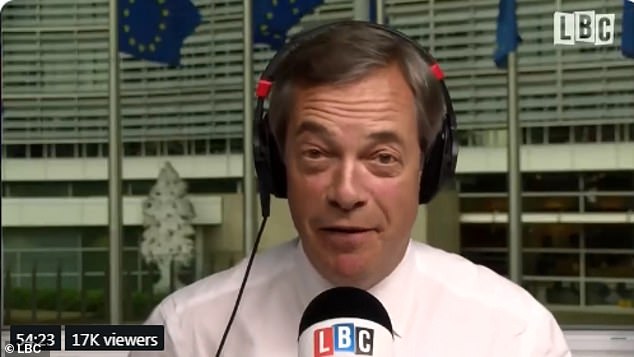 Mr Farage (pictured presenting his LBC show this week) told MailOnline he would be ‘perfectly happy’ to meet Mr Trump, but no plans were yet in place

After Air Force One touches down on the Monday, the Trumps will be welcomed at Buckingham Palace by the Queen, Prince Charles and the Duchess of Cornwall – in a nod to Camilla’s ever-growing importance in royal circles.

The President will receive a ceremonial welcome in the Buckingham Palace garden, and he and Charles will inspect a guard of honour formed of Nijmegen Company Grenadier Guards.

Lunch on the Monday will be at Buckingham Palace, hosted by the Queen and with the Duke of Sussex, after which they will tour a special exhibition in the Picture Gallery showcasing items of historical significance to the United States from the Royal Collection.

Afterwards, the President and Mrs Trump, accompanied by Prince Andrew, will visit Westminster Abbey, where the President will lay a wreath at the Grave of the Unknown Warrior, before a short tour of the abbey.

Afternoon tea will be at Clarence House, with Camilla and Melania present – the first time the heir to the throne has hosted a US president in a personal capacity.

The full state banquet – which is being snubbed by Labour leader Jeremy Corbyn, Speaker John Bercow and Liberal Democrats leader Vince Cable – is on the Monday evening, with speeches by the Queen and the President.

On Tuesday morning, the party moves to St James’s Palace for a breakfast meeting with senior UK and US business leaders, co-hosted by Mrs May and Mr Trump and attended by Prince Andrew.

Following talks at 10 Downing Street, Mrs May will then host lunch before the two leaders hold a joint press conference.

Then in the evening, the President and First Lady will host a return dinner at Winfield House, the official residence of the US Ambassador, at which Charles and Camilla will attend on behalf of the Queen.

On the final day, June 5, the senior royals led by the Queen will gather in Portsmouth for a full military commemoration of the D-Day landings which took place 75 years ago on June 6.

The pageant – attended by 300 veterans of the Normandy campaign – will include a fly-past of 25 modern and historical aircraft.