It is either the work of a madman or a visionary.

In the depths of a mountainside in Texas, a 200ft tall ‘cuckoo clock’ is being constructed which is designed to outlive our civilisation.

Costing £30million and backed by an internet billionaire, the 10,000 Year Clock will sit in a massive man-made shaft.

Its giant components are already being assembled. The timepiece is intended to run for thousands of years with little, if any, maintenance by humans.

Jeff Bezos, the founder of online marketplace Amazon, is investing part of his £75billion fortune in the scheme.

Jeff Bezos, the founder of online marketplace Amazon, is investing part of his £75billion fortune in the scheme

It will take years to complete and is intended to encourage longer-term thinking rather than the quick-fix, instant gratification of the early 21st century.

‘It’s a special clock, designed to be a symbol, an icon for long-term thinking,’ Mr Bezos wrote in a blog post. ‘As I see it, humans are now technologically advanced enough that we can create not only extraordinary wonders but also civilization-scale problems.’

Because of its long time-span, the ambitious project has been compared with the pyramids and Stonehenge.

Video footage shows an advanced stage of excavation in the mountain – owned by Mr Bezos – in the Sierra Diablo range in west Texas. A team of engineers is seen setting up huge cogs in the mountain cavern.

The clock was dreamt up by computer scientist Daniel Hillis. In an essay in 1996, he laid out his vision, which complained our ‘civilisation is revving itself into a pathologically short attention span’. The solution, he suggested, was a clock that would operate on a much longer timescale.

He wrote: ‘I would like to propose a large (think Stonehenge) mechanical clock, powered by seasonal temperature changes. It ticks once a year, bongs once a century, and the cuckoo comes out every millennium.’ 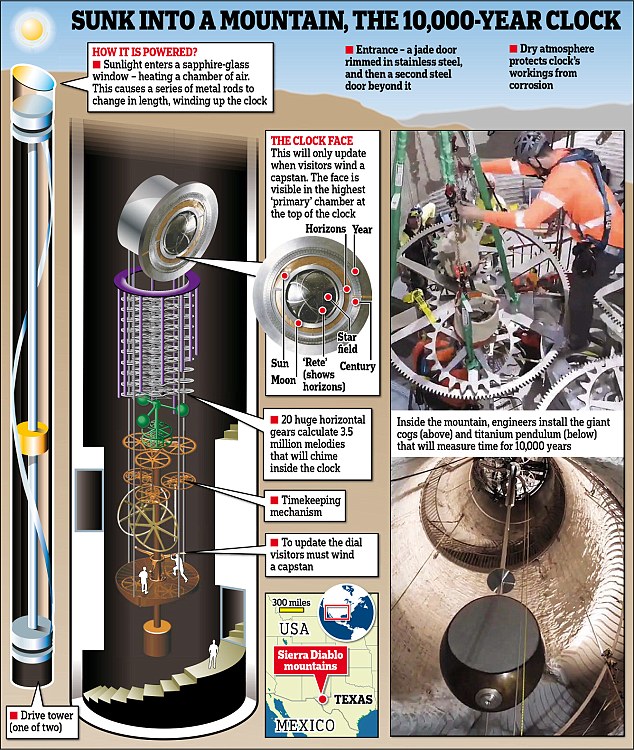 The project is run by a non-profit group called the Long Now Foundation.

The clock will be powered by variations in temperature each day that will be enough to work a pendulum. Visitors will also be able to contribute by helping to wind the clock.

The mechanism is powered by a large weight hanging on a gear and is constructed from titanium, stainless steel and dry running ceramic ball bearings.

Scientists at Nasa’s Jet Propulsion Laboratory have ensured that correction mechanisms are built into the clock so it can correct itself over the millennia.

Other billionaires and their brainwaves

SERGEY BRIN, a co-founder of Google, is said to be funding a £107million supersized airship which could deliver food and supplies to remote areas on humanitarian missions, as well as being used for luxury travel.

MARK ZUCKERBERG, the chief executive of Facebook, is donating £3billion to ‘cure all disease’ by the end of the next generation.

ELON MUSK is investing billions in his SpaceX projects – and recently sent a Tesla sports car into space as a test of his new Falcon Heavy, the largest rocket since Nasa’s Saturn V. The PayPal founder is also planning to build high-speed ‘Hyperloop’ transportation systems.

PETER THIEL, a tech venture capitalist, is investing large sums into ‘curing’ death by extending human longevity, and has given tens of thousands to a Harvard professor’s project to resurrect the woolly mammoth.

BILL GATES, of Microsoft, set up a foundation with his wife Melinda that has invested billions in fighting disease, including malaria.

The clock’s chimes – comprising ten bells – will be programmed to not repeat themselves for 10,000 years.

The clock will be opened to the public when it is ready – although no completion date has been made public.

Inside the mountain are five room-sized chambers which can be visited at the appropriate time. The chambers will mark the one year anniversary of the clock’s operation; then ten years, 100, 1,000 and 10,000 years.

An orrery – a mechanical model of the solar system – will be held in the ‘one year’ chamber, which also includes representations of the space probes launched last century.

The other chambers will be left empty for future generations to fill with the mechanics they see fit.

Tourists who want to visit will have a tough task – the nearest airport is several hours away by car and rugged trails to the clock rise to 2,000ft.

‘To see the clock you need to start at dawn, like any pilgrimage,’ says the Long Now Foundation’s website. ‘Once you arrive at its hidden entrance in an opening in the rock face, you will find a jade door rimmed in stainless steel, and then a second steel door beyond it.’

Inside, visitors will travel along tunnels and then climb a spiral staircase past the mechanism and the chimes. They will be able to wind the clock at a ‘winding station’ which will need two or three people to move the capstan and its 10,000lb weights.

The clock face, higher up the staircase, will display the time only when visitors have completed the exercise.

Those not prepared to make the long trek can see a miniature prototype in London’s Science Museum.