An MRI scan that lasted four days has produced images of the brain that are more detailed than ever before.

The findings show tiny changes inside the brain and scientists say they could be a window into conditions such as depression or coma.

It was only possible by using the brain of someone who had died, because a live person couldn’t tolerate the days-long scan and the images would have been too blurred by blood flow and movement.

The scanner was also far more powerful than those in hospitals, producing images so detailed that it could see things smaller than 0.1mm.

Scientists said they have never seen anything like it and hope it paves the way for more research into the brain’s health. 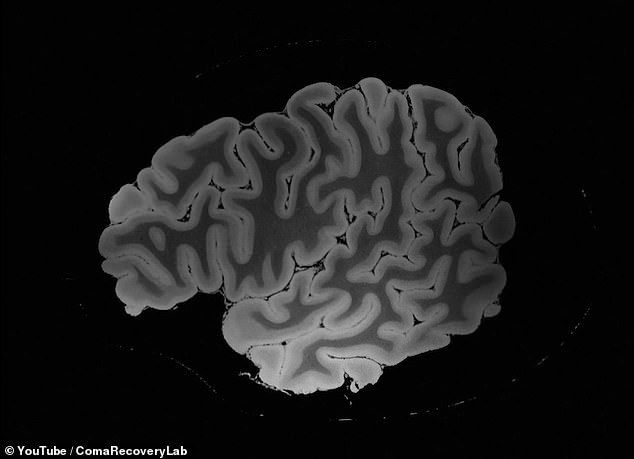 It was only possible by using the brain of someone who had died, because the images would have been too blurred with a living person whose brain was functioning 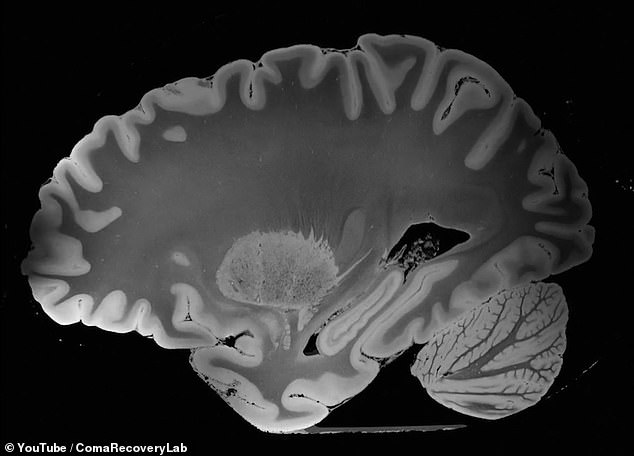 Parts of the brain can be seen in vivid detail,  including the cerebellum (pictured bottom right) which controls voluntary movement in the body

The images, created by researchers at Massachusetts General Hospital in Boston, took more than 100 hours – far more than the usual 15 to 90 minute scan.

The result has ‘the potential to advance understanding of human brain anatomy in health and disease,’ the researchers claim.

The brain belonged to a 58-year-old woman who had died three years ago of pneumonia and had no neurological damage.

Before the scan began, researchers built a custom case that held the brain still and allowed it to withstand the constant magnetic waves.

Parts of the brain can be seen in vivid detail, including the amygalda, a collection of nuclei no bigger than an almond, nestled deep within the brain.

Conditions such as anxiety, autism, depression, post-traumatic stress disorder, and phobias are suspected of being linked to abnormal functioning of the amygdala due to damage or a chemical imbalance.

The cerebellum, which controls voluntary movement in the body, is also strikingly clear.

It wouldn’t have been possible to get these results without the strong MRI scanner, which had a magnet strength of seven Tesla – hospital ones are usually three Tesla.

Or, if the brain had been that of a living person – any movement during a scan can ruin the results, which would include those that come from breathing or blood flow.

MRI scans are already used to detect a variety of conditions of the brain such as tumours, swelling or developmental problems.

But no-one would be able to withstand hours – and days – of remaining so still.

‘We haven’t seen an entire brain like this,’ Professor Priti Balchandani of the Icahn School of Medicine at Mount Sinai in New York City, who was not involved in the study, said, according to Science News.

The images push boundaries and could hold clues for researchers trying to pinpoint hard-to-see brain abnormalities involved in disorders such as comas and psychiatric conditions.

The FDA in the US first approved the 7T scanner for clinical imaging in 2017, and it was installed in at Glagow’s Queen Elizabeth University Hospital (QEUH) in 2016, at a cost of £10million.

Its increasingly being used to research and diagnose a variety of conditions such as stroke, vascular dementia, Alzheimer’s disease and epilepsy.