Mrs. Brown’s Boys’ Fiona O’Carroll has announced her separation from husband and co-star Martin Delany after 15-years of marriage.

Speaking to RTE, the actress, 41 – best known for her role as Maria Brown on the hugely popular sitcom – claimed they had ‘grown apart’ and insisted the split was a mutual decision.

She said: ‘Myself and Martin met very young. I was 16, and I suppose he’s all I’ve ever known and we just kind of grew apart.

All over: Mrs. Brown’s Boys’ Fiona O’Carroll has announced her separation from husband and co-star Martin Delany after 15-years of marriage

‘We wanted different things. I still have a lot of love for him and I only want the best for him and I think he feels the same way about me.’

She added: ‘There were no major fights, and nobody else was involved but it was a case of not being on the same page any longer.’

Fiona – the real life daughter of Mrs. Brown’s Boys creator Brendan O’Carroll – admitted she persevered with the marriage after watching her own parents divorce in 1999. 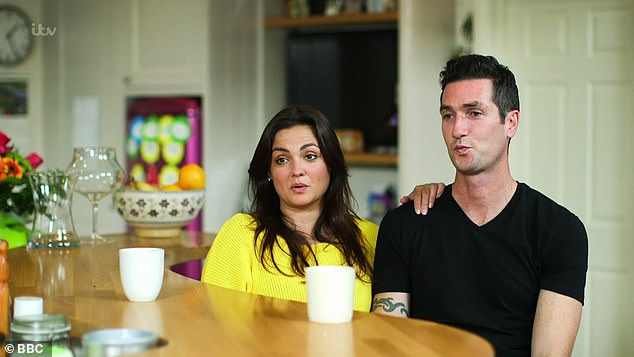 ‘I think I hung on for as long as I did because when my own parents broke up, that was very public, and there was a lot of hurt involved there,’ she added.

The couple married in 2006, going on to have four children – sons Felix, Isaac, Eli and Dexter.

Martin, who plays Mrs. Brown’s youngest son Trevor in the BBC show, now lives in Portugal but is understood to co-parent the children and stay at the family home whenever he is in his native Ireland.

Mrs. Brown’s Boys, which has been both loved and maligned since its inception in 2011, is set to air two more episodes over the festive period – despite being plagued with claims of backstage drama and the departure of two cast members.

The actors in question – Damien McKiernan and Gary Hollywood, who play couple Dino and Rory – were said to have discovered they earn less than the rest of the cast – which is largely made up of star Brendan O’Carroll’s family.

And an insider exclusively told MailOnline last year that the way the show is run behind-the-scenes makes for an unhappy work environment.

‘The show is very Upstairs/Downstairs, with a very clear divide between Brendan’s family and the few actual actors such as Gary and Damien.

‘The family are all directors of the Mrs Brown’s production company and are always looked after. The BBC let Brendan do whatever he wants!’