A member of the brutal MS-13 gang, accused of killing a man and putting his corpse in the trunk of a car before setting it alight, has been arrested after two months on the run.

Fugitive Franklin Platero-Rodriguez was apprehended outside a Subway restaurant in Berkeley County during a joint operation by US marshals and local police officers.

The 21-year-old, who, according to the Berkeley County Sheriff’s Office, is a documented and confirmed MS-13 gang member, is accused of intentionally and knowingly causing the Houston death of a man by shooting him.

After the man was killed, Platero-Rodriguez allegedly ‘poured gasoline on a vehicle and burned it while the deceased was inside the trunk,’ the office said.

He was arrested in Ladson, South Carolina, after marshals in Texas tipped off sheriffs.

‘We work closely with our federal partners and arrests like this are a result of it. Platero-Rodriguez is a dangerous MS-13 gang member and I am glad that we were able to locate and arrest him without him being able to cause further harm,’ Sheriff Duane Lewis said.

Platero-Rodriguez was being sought by the Walker County Texas Sheriff’s Office and by Immigration Customs Enforcement (ICE) for a 2014 federal charge of failure to appear in connection with the March 31, 2018, murder. 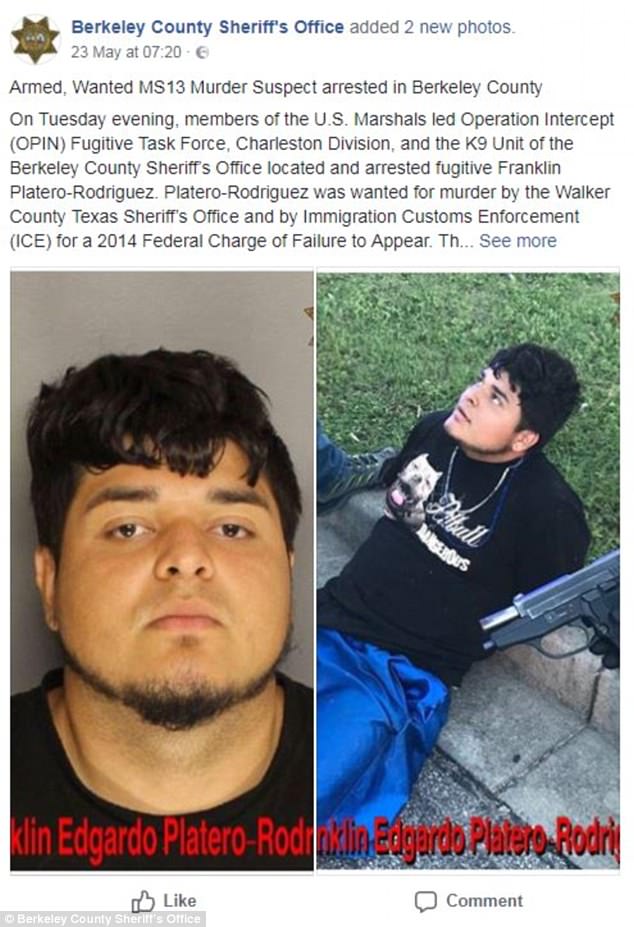 While he was under surveillance in Berkeley, law enforcement officers saw Platero-Rodriguez exit a Subway Restaurant in Ladson.

After he was seen getting into the driver’s seat of a white Ford F-150 extended cab truck, members of the U.S. Marshals Task Force and Berkeley County Sheriff’s Office K9 Unit ‘conducted a felony take-down’, the sheriff’s office said.

He was found carrying a loaded 9mm pistol in his front pocket that was ‘determined to have been stolen from Texas’, it added.

The Ford F-150, which allegedly, ‘matched the description of the vehicle used at the Texas murder scene, was seized as evidence and held for Walker County, Texas’.

After being captured in the joint operation, Platero-Rodriguez was taken to the Berkeley County Sheriff’s Office, where he ‘was booked and charged with the charges of unlawful carrying of a firearm; possession of a stolen firearm; fugitive in possession of a firearm,’ the office said.

Following his capture, Sheriff Duane Lewis told reporters at a press conference: ‘He is wanted out of Texas for murder; we assisted the marshals in apprehending him. There was a good bit of surveillance that was going on. The detectives tracked him there, to the sandwich shop where you all know he was taken into custody, without incident.

‘Rodriguez is wanted out of Walker county, Texas, for murder. The authorities there tell me he is a MS-13 gang member, and that he [allegedly] shot and killed an individual, put them in a trunk of a vehicle, and then set it on fire. He’s accused of a very serious, heinous crime.’ 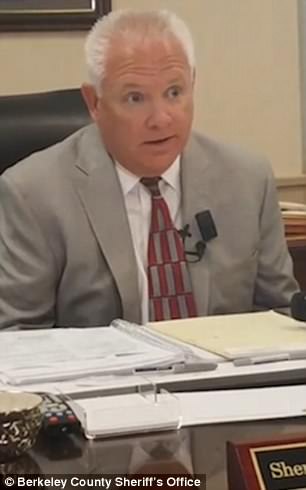 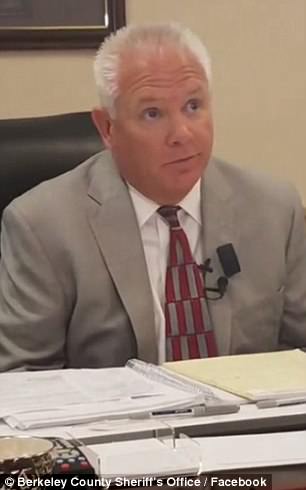 Sheriff Duane Lewis told reporters at a press conference that Platero-Rodriguez was originally from El Salvador, and had been ‘deported at least once’

Mr Lewis said that the arrested man was originally from El Salvador, adding: ‘He has been deported at least once, and then entered the country illegally again.’

Immigration and customs enforcement officials told Fox News that he was able to enter the country through ‘a loophole’, as an unaccompanied alien child – an illegal immigrant under the age of 18 who has entered the country.

Walker County detectives were expected to interview the arrested man ‘and to look at some of the evidence we’ve recovered. He was in possession of a pistol, a 9mm pistol, that we believe, based on information we’ve received, may be the murder weapon.’

The sheriff said that Platero-Rodriguez was also a ‘suspect in a home invasion on the street he was actually staying, several doors down’, where an armed, masked man entered a family’s home.

Quizzed about the possible presence of MS-13 gang members in the area, he said that officials are looking for known associates.

The ‘MS’ stands for Mara Salvatrucha, and the gang was started by immigrants who had fled El Salvador’s civil war, with other members came from Mexico, Honduras, and Guatemala.