A new drug could offer a ray of hope to thousands of multiple sclerosis patients after it almost halved the speed of brain shrinkage in a trial.

People suffering from a severe, progressive form of the nerve disease could be helped by a pill called ibudilast.

The medication is thought to work by reducing inflammation and cell deaths in the brain, minimising the loss of vital tissue.

Ibudilast is aimed at people with the less common primary or secondary progressive multiple sclerosis (MS), for whom the condition is constant and hard to control.

Researchers are not certain how the drug works but said that after almost two years people had ‘more brain’ remaining than those who didn’t take the drug.

More than 100,000 people in Britain are thought to have MS as well as 400,000 Americans, and 10-15 per cent of those have the progressive form of the incurable disease. 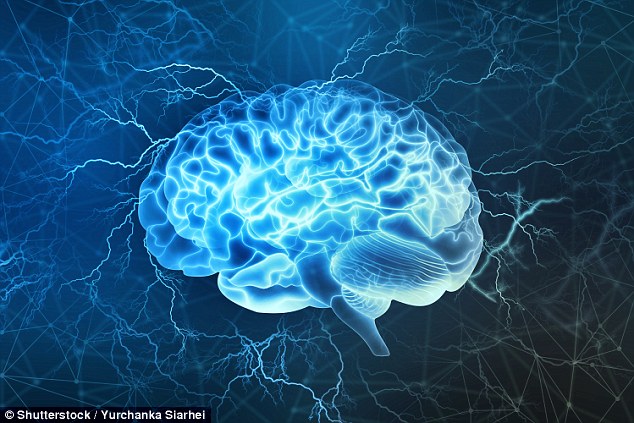 Ibudilast reduced the amount of brain shrinkage by an average of 48 per cent among people who took the drug for nearly two years, suggesting it could slow degeneration caused by MS

A study by the Cleveland Clinic in Ohio involved 255 people in an almost two-year test of ibudilab.

Patients had MRI brain scans every six months to track how the disease was affecting them.

Results showed shrinking of the brain – which damages nerves and causes disability – was 48 per cent slower among people who took the drug.

‘These patients have more brain than they would have had’

‘No one has no brain shrinkage,’ study leader Robert Fox told the New Scientist. ‘We expect there to be some just due to normal aging.’

WHAT IS PROGRESSIVE MULTIPLE SCLEROSIS?

Multiple sclerosis, a degenerative disease which causes nerve damage in the brain and spinal cord, can be progressive, relapsing or benign.

Progressive MS is split into primary progressive and secondary.

It is a constant, gradually worsening condition instead of sudden attacks like those caused by relapsing MS.

This type of MS is most often diagnosed in people in their 40s and 50s, and there are no NHS medications to slow it down.

Secondary progressive MS usually develops after the relapsing disease, when people stop suffering periodic attacks and begin to show symptoms all the time.

Modern medications for relapsing MS means fewer people are likely to develop secondary progressive, and if they do it could take more than 20 years to happen.

‘But these patients, they have more brain now than they would have had without being on ibudilast.’

Brains of people who take the drug shrink by an average of 2.5ml less over 24 months than those who don’t – the average volume of an adult brain is 1,350ml.

Ibudilast is thought to work by slowing down the process which causes nerve damage.

MS makes the protective casing around nerves – which send signals between the body and brain – degenerate and break down, eventually causing the nerve to malfunction.

Symptoms of this include tiredness, difficulty walking, vision problems, numbness or tingling, muscle stiffness and spasms, and difficulty with balance and thinking.

Progressive MS, at which the drug is targeted, is constant and less common than relapsing MS from which people may lead normal lives and suffer relapses of symptoms.

The disease is not curable and affects people for decades. It is mostly commonly diagnosed in women in their 20s and 30s.

Dr Fox added: ‘The trial’s results are very encouraging and point towards a potential new therapy to help people with progressive MS.

‘It also increased our understanding of advanced imaging techniques so that future studies may require a smaller number of patients followed over a shorter period of time.’

The team’s findings were published in the New England Journal of Medicine.