He watched much of the morning’s session from the White House residence, according to an aide, and received staff updates on the afternoon session while he had meetings in the Situation Room.

The West Wing viewed former Mueller’s testimony as a win – so much so that Trump publicly thanked Democrats for inviting him to appear before the House Judiciary Committee.

‘I would like to thank the Democrats for holding this morning’s hearing,’ he tweeted, telegraphing his pleasure with a three-hour session that featured an elderly-sounding Mueller who was at times unable to recall elements of his investigation.

White House Press Secretary Stephanie Grisham said in a statement that ‘[t]he last three hours have been an epic embarrassment for the Democrats. Expect more of the same in the second half.’

A West Wing official said at the White House: ‘It would have been hard to script this better. The Dems overplayed their hand.’

President Trump’s verdict after Wednesday’s hotly anticipated Robert Mueller hearings indicated that he saw the day as a big win, and as a disappointment for his Democratic adversaries 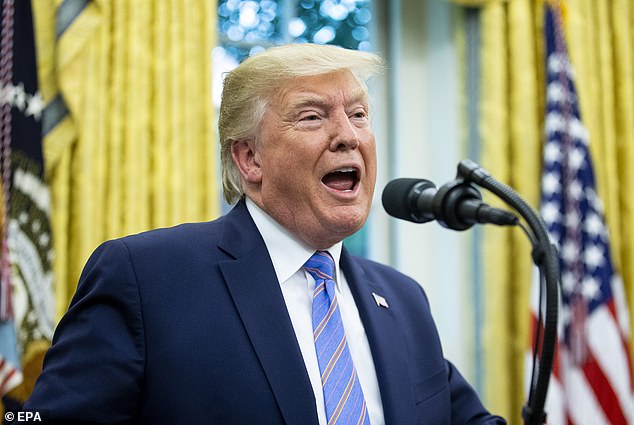 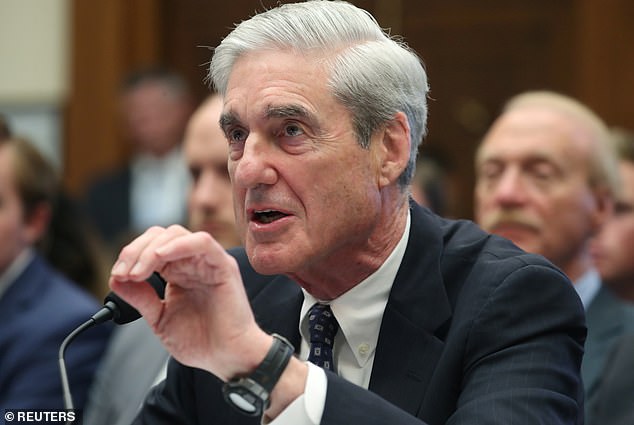 Mueller, 74, stumbled his way through a House Judiciary Committee session, stopping and starting his speech and asking members of Congress to repeat their questions

On Twitter, Trump added a jab at California Rep. Adam Schiff, who chaired the afternoon session of the Intelligence Committee.

‘Now, after 3 hours, Robert Mueller has to subject himself to #ShiftySchiff – an Embarrassment to our Country!’ he wrote.

Tim Murtaugh, communications director for Trump’s 2020 campaign, told reporters that ‘[t]he Democrats built up these two Mueller hearings as their Super Bowl, and at half time, it is not looking good for their side.’

Prominent liberals wrung their hands at lunchtime, rendering verdicts that ranged from disappoinment to disaster.

‘This is delicate to say, but Mueller, whom I deeply respect, has not publicly testified before Congress in at least six years. And he does not appear as sharp as he was then,’ tweeted David Axelrod, a former senior Barack Obama aide.

‘This is very, very painful,’ he added.

Famed liberal lawyer Laurence Tribe opined on Twitter that ‘this morning’s hearing was a disaster. Far from breathing life into his damning report, the tired Robert Mueller sucked the life out of it.’

The last three hours have been an epic embarrassment for the Democrats. Expect more of the same in the second half.

And Michael Avenatti, the longtime Trump antagonist who now faces dozens of criminal charges of the kind he once predicted for the president, tweeted that ‘Robert Mueller is not at the top of his game today. He just isn’t. Something is off.’

Trump had begun what Washington insiders are calling ‘Mueller Day’ by restating his well-trod case that his 2016 campaign didn’t collude with Russians, and that he never obstructed the lengthy special counsel probe that followed.

Instead, he claimed, Democratic politicians and other partisans conspired to unseat him from the Oval Office and should have been investigated as deeply and dramaticaly as he has been since before he took office.

‘So Democrats and others can illegally fabricate a crime, try pinning it on a very innocent President, and when he fights back against this illegal and treasonous attack on our Country, they call It Obstruction? Wrong!’ the president tweeted.

‘Why didn’t Robert Mueller investigate the investigators?’ he asked.

As the morning’s hearing took its first break, the president weighed in from the White House residence, quoting a Fox News Channel anchor.

Trump attorney Jay Sekulow said in a statement after the fist hearing that Mueller’s testimony ‘exposed the troubling deficiencies of the Special Counsel’s investigation. The testimony revealed that this probe was conducted by a small group of politically-biased prosecutors who, as hard as they tried, were unable to establish either obstruction, conspiracy, or collusion between the Trump campaign and Russia.’

The president’s son, Donald Trump Jr., followed the same line as his father, tweeting: ‘When are they going to investigate the investigators?’ 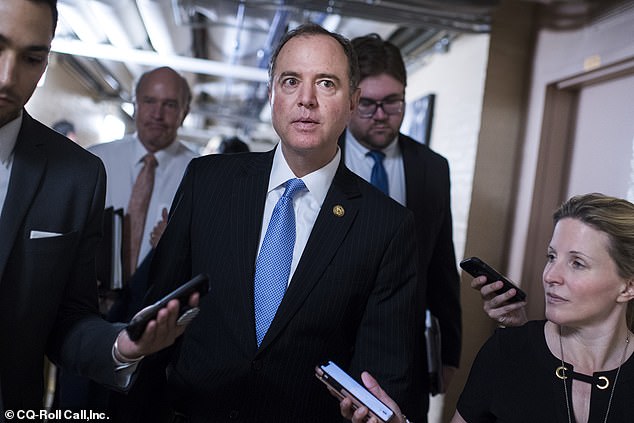 David Axelrod, a former senior aide to Barack Obama, said Mueller was ‘not as sharp as he was’ in previous hearings

Michael Avenatti, the former attorney to Trump accuser Stormy Daniels, said Mueller was ‘not at the top of his game’

Laurence Tribe, a liberal lion of the legal establishment, called the morning Mueller hearing ‘a disaster’ 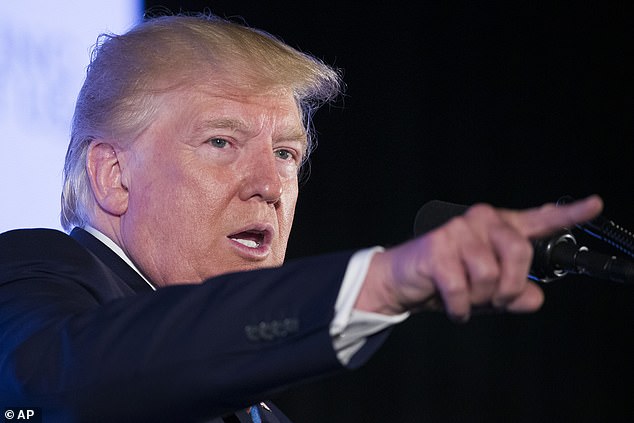 President Donald Trump sought to pre-empt Robert Mueller’s congressional testimony on Wednesday, blasting him and Democrats in the House of Representatives for investigating the wrong person

Trump vented his frustrations, booming on Twitter that Democrats had ‘illegally fabricate[d] a crime’ in order to bounce him from office 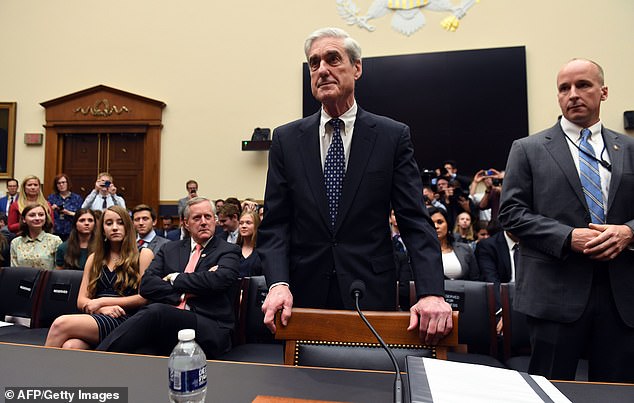 Mueller, a former FBI director who probed Trump and others for 22 months, testified in House hearings on Wednesday

‘The Democrats have investigated @realDonaldTrump and our whole family for over two years in the largest witch hunt/hoax i[n] US history,’ he tweeted. ‘They’ve come up with nothing because there was never anything.’

The president’s obections, however, largely focused on the forces other than Mueller himself that he believed were aligned against him.

‘So why didn’t the highly conflicted Robert Mueller investigate how and why Crooked Hillary Clinton deleted and acid washed 33,000 Emails immediately AFTER getting a SUBPOENA from the United States Congress? She must have GREAT lawyers!’

The cast of characters in those tweets include Comey, the former FBI director who has emerged as a major Trump foil since he left office and made the decision in 2016 not to charge Hillary Clinton with a crime related to her private email server. 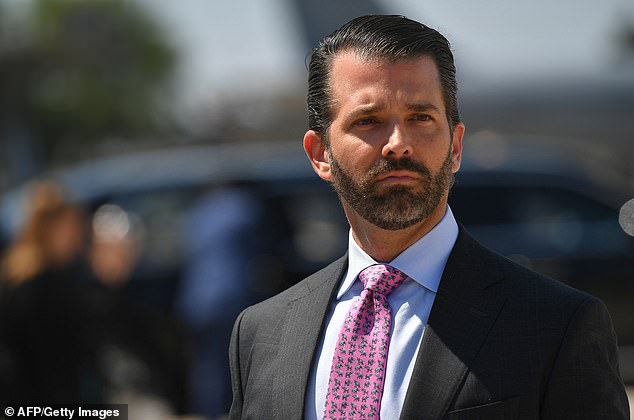 Donald Trump Jr., the president’s eldest son, tweeted along the same lines as his father, saying congress and others should ‘investigate the investigators’; he blasted Mueller’s admission that he was unfamiliar with Fusion GPS, the company whose opposition research may have launched the Russia probe 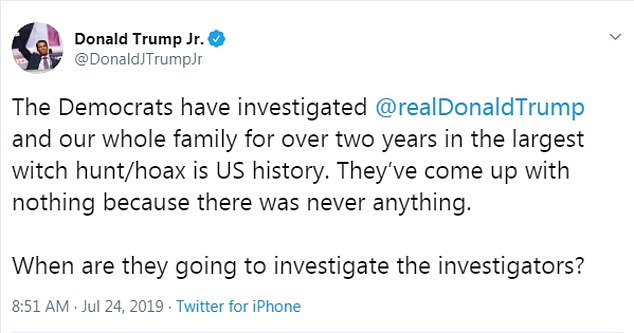 Don Jr. said his entire family has been dragged through an unfair ‘witch hunt’ and ‘hoax 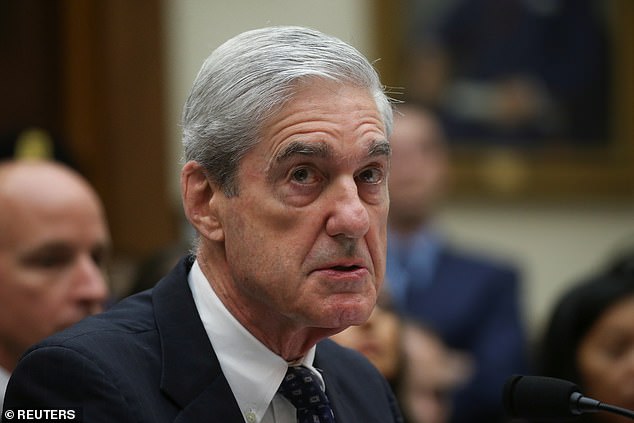 The president baited Mueller before the hearings, suggesting that he only investigated him with vigor because he didn’t get the top FBI job he wanted

The computer hardware in her upstate New York basement, intelligence agencies later found, contained more than 100 coassified documents. it was unprotected from hackers and viewed by foreign intelligence services.

Clinton’s State Department staff and attorneys used software called ‘BleachBit’ to wipe tens of thousands of email messages away instead of turning them over to government investigators. Clinton claimed they were all personal in nature, not work-related.

Page and ‘Peter S.’ – Peter Strzok – were paramours at the FBI, Strzok as a senior FBI agent on Mueller’s team and Page as a Justice Department lawyer. The pair exchanged text messages in 2016 suggesting they wanted to keep Trump from becoming president.

McCabe, Comey’s deputy, was fired for lying to investigators about his role in authorizing FBI employees to leak information to The Wall Street Journal.

Fusion GPS is a research firm that the Clinton campaign and Democratic National Committee paid more than $1 million to collect opposition research about Trump during the presidnetial campaign.

One result of that work was an unverified dossier assembled by former British spy Christopher Steele. That document uncluded salacious allegations about the future president, including claims about him cavorting with prostitutes in Moscow.

The president has long sought to paint his 2016 rival, Hillary Clinton, as the villain in a conspiracy against him

The president riffed on his now-familiar theme about investigating the investigators, citing a laundry list of his political enemies including Clinton, former FBI director James Comey and Fusion GPS, the opposition research firm that commissioned a salacious dossier on him with Democrats’ funding 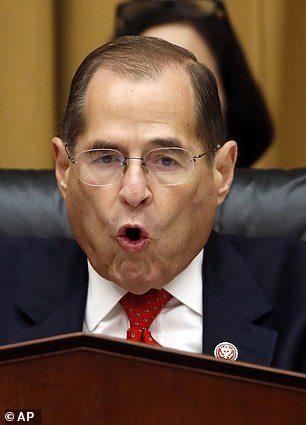 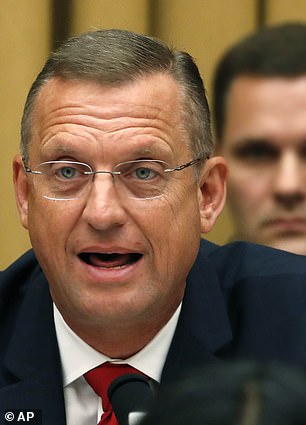 Judiciary Committee Chairman Jerrold Nadler, a Democratic lawmaker from New York (left) led the charge from the left on Wednesday; Rep. Doug Collins, the ranking Republican member, coordinated and led the counter-push from the right

Bruce Ohr, a Justice Department official at the time, served as a conduit between Fusion GPS and Mueller’s team; his wife Nellie Ohr worked for the firm.

Trump dared Mueller on Wednesday to deny that he sought the top job at the FBI, a position he previously held, and that Trump refused him one day before he was appointed special counsel.

‘It has been reported that Robert Mueller is saying that he did not apply and interview for the job of FBI Director (and get turned down) the day before he was wrongfully appointed Special Counsel. Hope he doesn’t say that under oath in that we have numerous witnesses to the interview, including the Vice President of the United States!’

Trump has suggested Mueller was the equivalent of a jilted lover, casting him without evidence as a vengeful partisan.

During Wednesday’s hearing Mueller parried questions about Fusion GPS, saying he was unfamiliar with it.

‘If anyone still believes that this hoax was anything more th[a]n a leftist attempt to overthrow @RealDonaldTrump, this fact should end that notion once & for all,’ he wrote.

‘It’s time to investigate the investigators!!! They perpetrated this crime against America, they should pay for it!’

‘How can anyone credibly say they investigated something without looking at any of the origins of the entire thing… it’s dumbfounding,’ he added. ‘2 years and almost $50,000,000 & and he doesn’t have a clue to how it started? GTFO.’

GTFO is shorthand for ‘Get the f**k out.’