Covid-deniers are plotting to create their own anti-vax paradise in northern NSW to escape restrictions that will prevent them from socialising or living freely anywhere else.

Mullumbimby, 15 minutes’ drive from Byron Bay, has been touted as a potential safe haven for people with alternative views who insist on defying science-backed government orders.

The region is considered the anti-vaccine capital of Australia with as little as 39 per cent of residents fully inoculated against Covid-19.

But soaring house prices, where the median price is over $1.5million, could hinder many Covid-deniers’ plans.

A ‘call to arms’ among disbelievers is gaining traction within private Facebook groups, urging the community to stand strong in their beliefs in the face of intense public scrutiny.

There are businesses advertising they will only serve unvaccinated customers, and others assuring they won’t ask questions.

Locals in the area who agree with the movement say Mullumbimby is by far the most vaccine-hesitant of the NSW north coast towns, and would therefore be the easiest to overrun 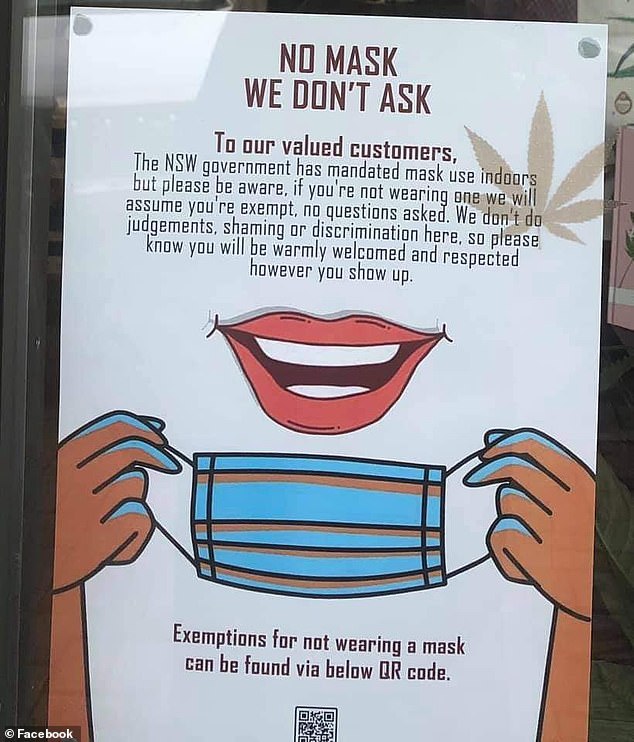 Some anti-vaxxers have suggested if enough people move from their own towns to Mullumbimby they would be able to ‘take over’ and drive out locals who don’t align with their values.

‘We should all move, outnumber the sheep and vote in Free People to council,’ one woman suggested.

By Free People, the anti-vaxxer said she was referring to ‘us, the free from tyranny’.

With an elected Covid-denier in power at a local level, the group hoped they would be free to move about as they pleased, without mandatory masks, QR check in codes or the need to be fully vaccinated.

From mid-October, NSW Premier Gladys Berejiklian has indicated Sydneysiders will be released from a then-17-week lockdown, but only if they’re double-jabbed.

Those who are vaccinated against Covid will be afforded new freedoms which will include visiting bars, hair and beauty salons, gyms and restaurants. 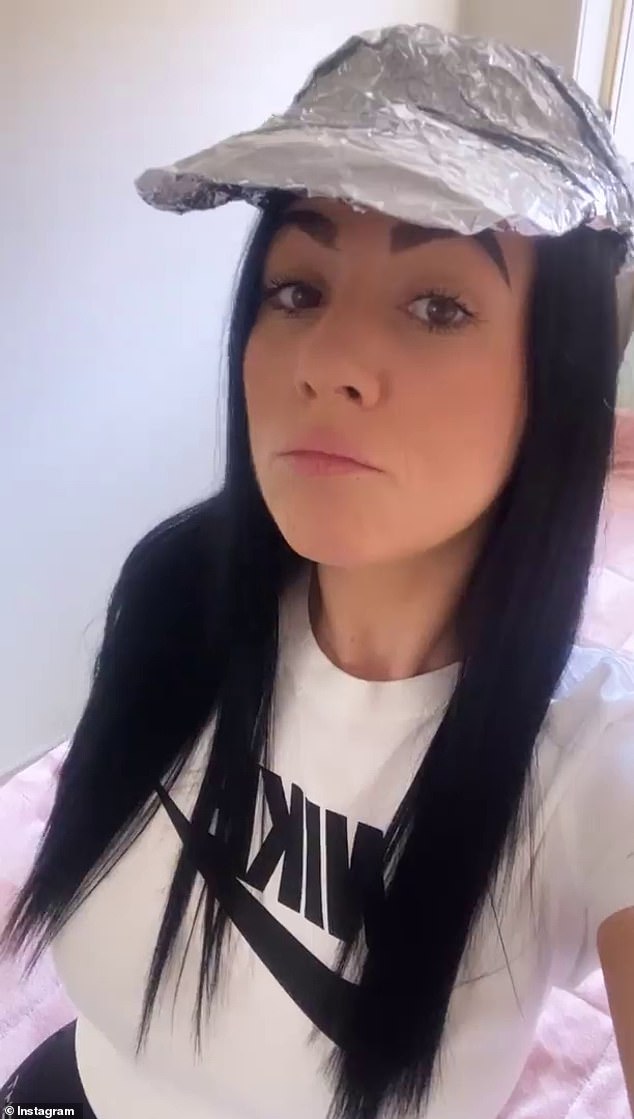 Industries are increasingly requiring workers to be jabbed for their jobs – another issue flagged by the anti-vaxxers that they want amended in their new society.

Instead, businesses in the ‘free world’ will be owned, operated and staffed by people who are equally as against the jab as every patron.

Businesses will likely be ‘cash only’ as well, given many of the conspiracy theorists also believe that the government is trying to introduce a cashless society as a means to control the population.

‘The point at which we refuse to take that vaccine opts us out of the newly established social credit system,’ one person bizarrely explained.

‘Digital currency is next and we won’t have access to that if we’re not in the social credit system. We are outliers and need to strategies outside the normal parameters to survive what’s to come.’ 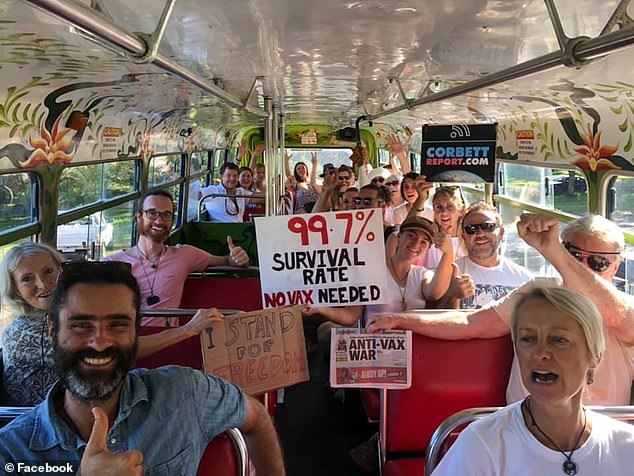 Childhood vaccination rates are among the lowest in Australia in the town, with just 68.2 per cent of one-year-olds fully immunised, compared with 94.9 per cent nationwide 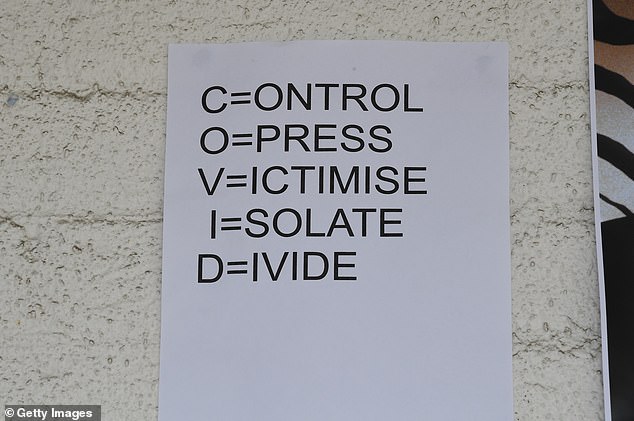 Locals in the area who agree with the movement say Mullumbimby is by far the most vaccine-hesitant of the NSW north coast towns, and would therefore be the easiest to overrun.

Already, there are businesses with signs up banning any recently-vaccinated customers from entering.

They falsely believe that people who have recently had the jab are the ones spreading the virus.

Childhood vaccination rates are among the lowest in Australia in the town, with just 68.2 per cent of one-year-olds fully immunised, compared with 94.9 per cent nationwide.

Nearby Byron Bay, which has long been considered an anti-vaccine breeding ground, was ruled out due to all the ‘rich do gooders’ that have made the town trendy. 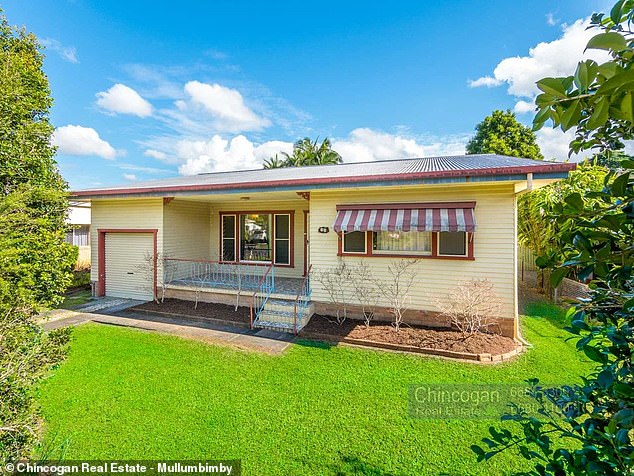 The median house price in Mullumbimby is over $1.5million. The modest house above is currently under offer at $1.1million

‘It’s overrun with them now,’ one person lamented. ‘Not the place to be if you don’t want to wear a face mask.’

There were suggestions that anti-vaxxers should create a ‘Mullumbimby-style paradise’ in each state and territory of Australia, to ensure people who are unable to travel interstate still have the option to live as they wish.

Outspoken Covid-denier Maria Zaric has frequently encouraged her followers to boycott any businesses that require a vaccine to enter – failing to realise that they wouldn’t be welcome there regardless due to their refusal to be jabbed.

When asked if she would consider moving to a designated ‘anti-Covid paradise’ as proposed, she revealed she’d be interested to see if something of the sort was possible.

In the meantime, she’s encouraged her followers to stand firm in their beliefs and not be swayed by promises of freedom from the government.

Vaccines are the only way out of repeated cycles of lockdown in Australia, tried and tested as a way to reduce Covid-related deaths and hospitalisations.

While the vaccine does not entirely stop the spread of the virus, it reduces transmissibility and the severity of illness in patients. 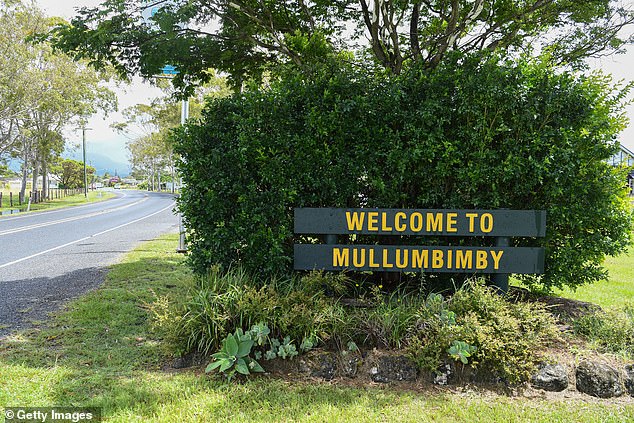