Sparks, like a million fireflies, are shooting everywhere, eliciting screams from the crowds huddled around the burning beacons on Huntington Beach.

There are 500 fire-pits garlanded across this portion of Southern California’s sweeping golden coastline, but only a few are in use tonight. We’d planned to toast s’mores — a sticky American bonfire favourite consisting of marshmallow, chocolate and crackers — and watch the sun sink on the horizon.

But it’s blowing a hooley, and our multi-generational trip to the Golden State sees us wrapped up in coats and being lashed by sand. It’s everywhere; in the baby’s milk, on the pizza, in our eyes. California?

This could be Cleethorpes in February. We are staying at the Hyatt Regency Huntington Beach Hotel and they have provided a beach butler to look after us. After four attempts and a mass of paraffin, the fire has finally spluttered into life but the heat dissipates into the wind.

Our butler brings us rugs and hot chocolate, but even the grandchildren — Naomi, eight, Mabel, six, and Rafe, one — think it’s a weird way to have fun. We wolf the pizza but give up on the s’mores as it requires getting too close to the fiendish fire and head back.

Why are we here? I have a photo at home of my husband and I surrounded by grandchildren, which my daughter had framed with a Winnie the Pooh caption: ‘We didn’t realise we were making memories, we just knew we were having fun.’

Since we lost our own parents, I am messianic about building memories, and so three generational family holidays have become a regular thing. Other parents help out with school fees. We provide vacations; travel, in my view, being just as educational, even if the memories are not cultural.

Sri Lanka will forever be defined by the monkeys who stole the kiddies’ toys from the swimming pool and carried them off to the roof of our villa, where they probably still lie. The Maldives for the huge inflatable unicorns in the swimming pool.

We travelled to California with our children when they were the same age as Naomi and Mabel. 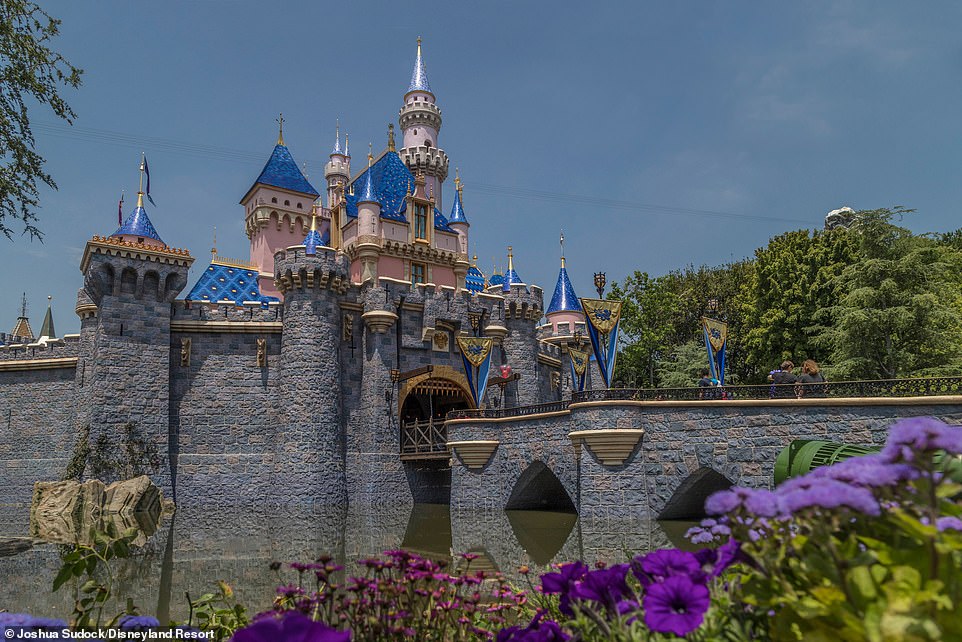 The family also visited Disneyland. Sue had told her granddaughters about their trip to LA by saying they had been invited by Mickey Mouse 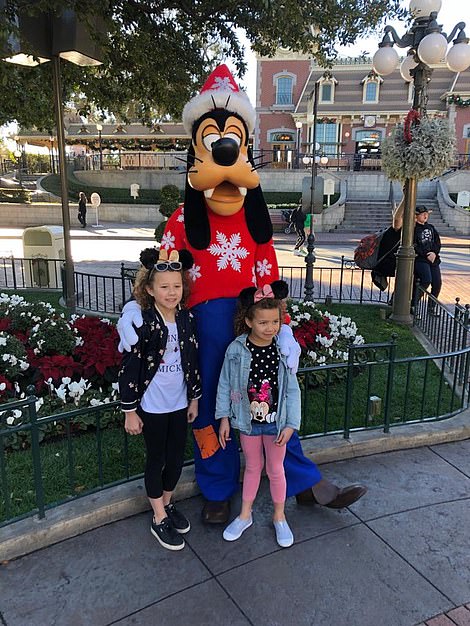 They remember the trip with such affection, we thought we would repeat it, though this time missing out on the long car journey from San Francisco which we loved and they hated.

We had broken the news to the girls in a letter from Mickey Mouse pinned to the Christmas tree, inviting them to come and see him.

Except instead of excitement there was puzzlement. ‘Who is Mickley Moo?’ asks Naomi exposing my awful handwriting.

Swallowing the cost of eight return flights to Los Angeles has a liberating effect on opening the purse strings. Why spend all that money and end up in a motel?

The Beverly Hilton is our first stop. LA famously has no defined city centre, it sprawls for miles north and south, but Rodeo Drive, where we are, is probably the closest to it.

I had wanted the first taste of the U.S. to be in-your-face glamour. The Beverly Hilton is home to the Golden Globes, where Marilyn Monroe stayed and, more tragically, it is where Whitney Houston drowned in her bathtub in Room 434 when she was there for the Grammys.

The rooms are disappointingly ordinary with tired furniture and a hedge blocking the view.

However, poolside, it is fabulous. We sit outside, order beers and I make a mental note: next time book a room at this more modern end of the hotel.

Or skip it altogether and book into Le Parc Suites in West Hollywood. It lies in a residential area and the suites are perfect for large family groups.

Two rooms are all we need for the eight of us, making it terrific value. It has a sitting room and kitchenette, and best of all is the roof-top pool and tennis court which has views across the Hollywood Hills. I could stay all day in the small café around the corner, Urth, listening to the regulars — production types, lawyers and bit-part actors — gossip about the film sets, the stars and last night’s party. 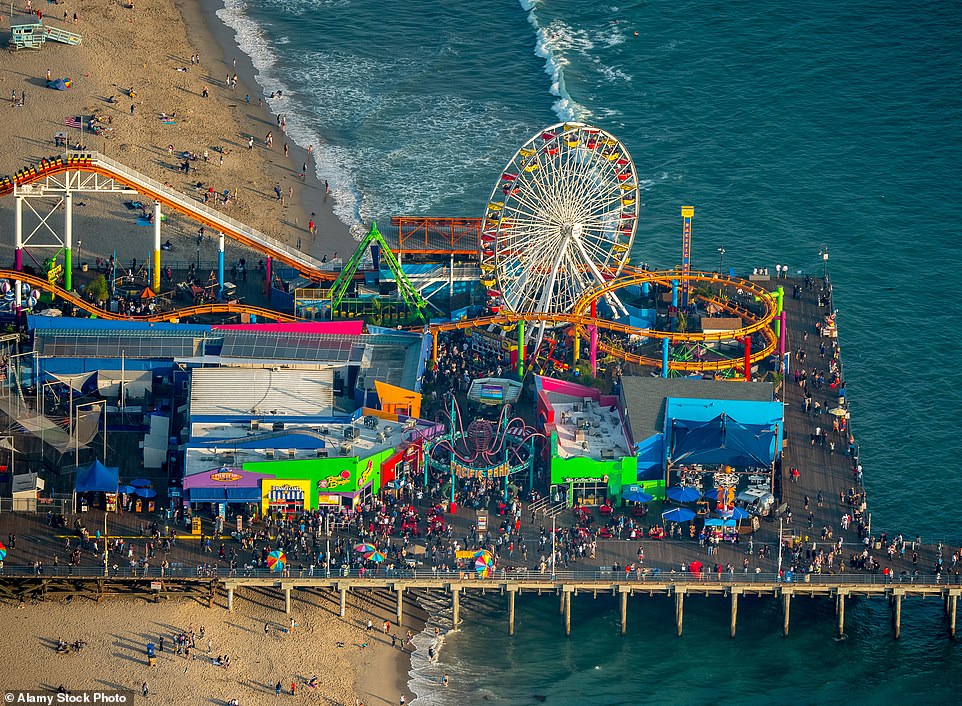 Sue enjoyed the buzz of the contrasting districts of LA, each with its own vibe, not least Santa Monica Pier, which she says is perfect for people-watching

LA CONFIDENTIAL: THE SECRETS TO SUCCESS

More than 4,210 acres of natural terrain in the eastern Santa Monica mountain range. Family attractions include pony rides, caves, trails, the Griffith Observatory, railway rides and a museum of the American West.

Very American, child-friendly restaurants where there are plenty of games to play. There is also a Video Arcade and performances by Chuck E. and his gang.

located on Museum Row, this one is just for children and features daily music, story and arts activities.

Get a taste of Hollywood and enjoy the rides, including the Wizarding World of Harry Potter.

Walk in on a first-come, first-served basis and decorate six cupcakes.

It is easy to hire bikes either on the boardwalks of the Los Angeles beaches or in Griffith Park. They even do elongated family bikes where four of you can all go on the same bike.

The dress is strictly casual, put together with hours of thought made to look as though it has been thrown together.

The guy in front of me picks up his oat milk latte and departs, singing, ‘Heigh-ho, heigh-ho, it’s off to work we go’.

Don’t believe those who say you can’t walk in LA. We go by foot everywhere, but mostly we go to the Farmer’s Market.

LA is divisive — some people love it, others hate its superficiality and lack of a real centre. But we enjoy the buzz of the contrasting districts, each with its own vibe, not least Santa Monica Pier, which is perfect for people-watching.

It is more relaxed with less culture than New York. My son — who goes regularly to the Big Apple to binge on gigs, theatre, book events and live TV recordings — has to scrabble around to find things to do. 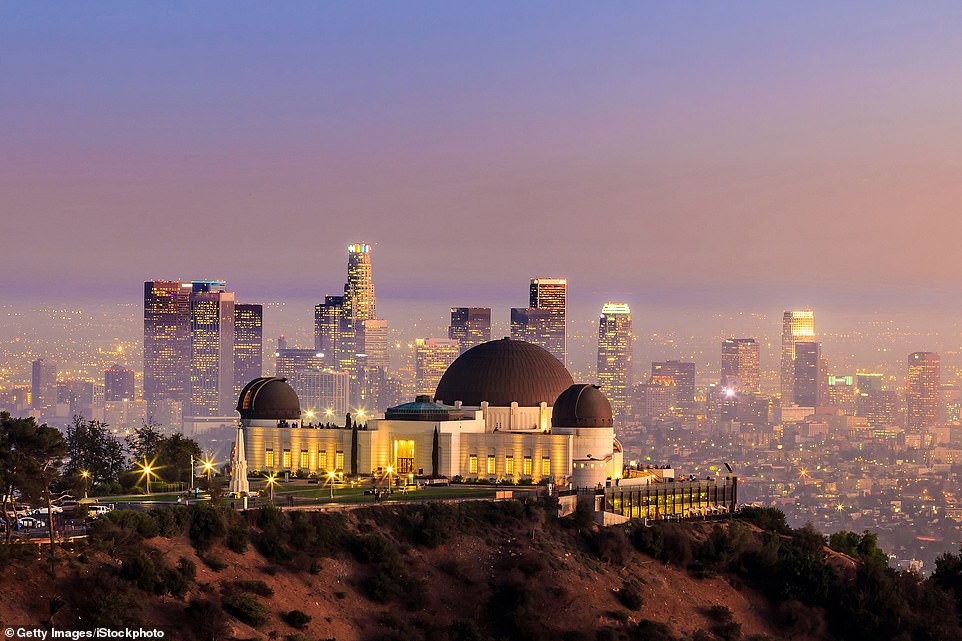 He books tickets for Smokey Robinson, and the LA Lakers vs NY Knicks at the Staples basketball stadium.

A talent scout spots Naomi in the Farmers’ Market and asks her to audition. ‘Grandad has ruined my career before it started’ she wails. ‘He said no because we don’t live here.’

At Shutters On The Beach, generally regarded as the coolest hotel in LA, my son spots Spike Lee in the bar. He spouts admiration and Lee poses for a selfie. It becomes my son’s Twitter photo.

More stardust comes from a different quarter. My son-in-law’s cousin is actress Alice Evans, married to Ioan Gruffudd (Hornblower, Liar), and they are invited to lunch where he makes his own pasta and the children meet their cousins for the first time. 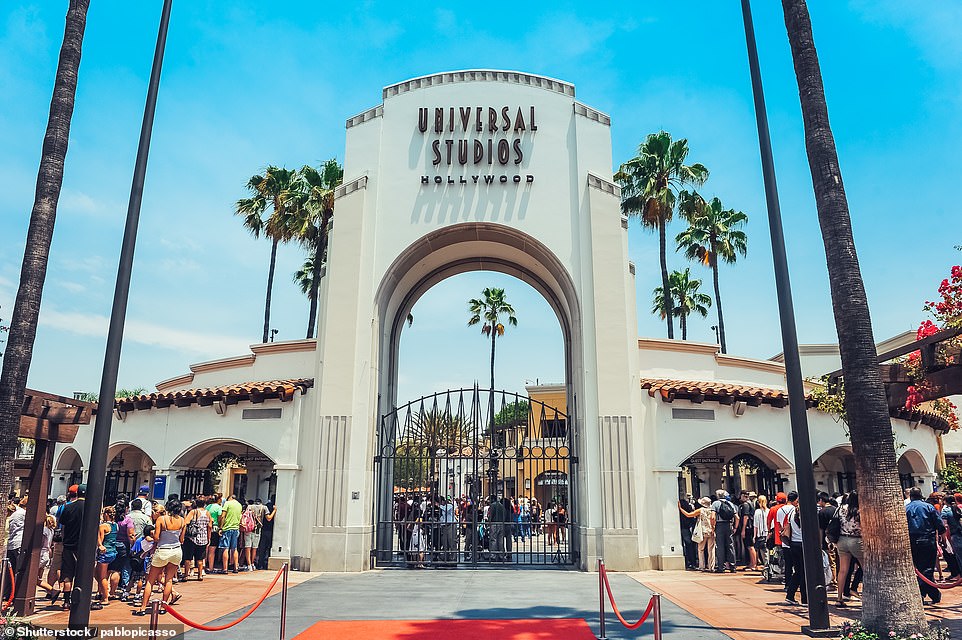 Universal Studios is where guests can get a taste of Hollywood and enjoy the rides, including the Wizarding World of Harry Potter

At Disneyland, the girls are booked into Bibbidi Bobbidi Boutique, a salon where young girls are transformed into princesses. We hate it, they adore it.

The Disney Park hotels are ridiculously pricey and I can get three rooms at the Hilton for the price of one in the Park.

Big mistake. It is a vast, soulless airport terminal type of place. Not that the family care; they are at Disney all day and all evening.

My husband and I drive west to Seal Beach, a quaint village with clapboard houses. We expect to spot James Stewart on the sidewalk or find ourselves in The Truman Show. At Walt’s Wharf the fish is cooked on an oak fire. Delicious. 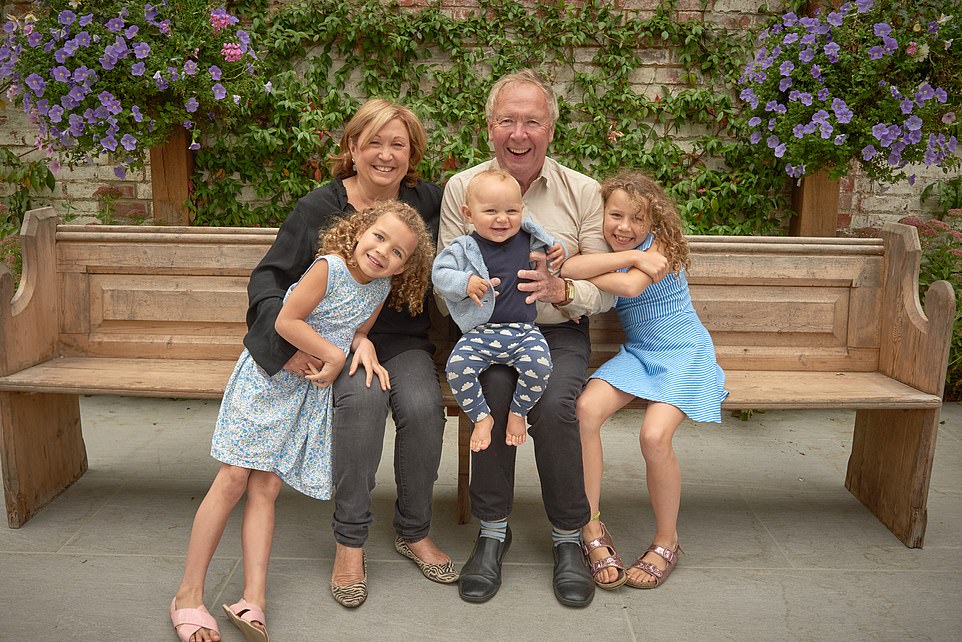 Sue with her husband and their three grandchildren, Naomi, eight, Mabel, six, and one-year-old Rafe

Sated with Disney, we head south along the Pacific Coast Highway to Huntington Beach. This is the California made familiar by the images; long stretches of sandy beach, dark blue ocean with high rolling waves, broad paths with bikers, skateboarders, rollerbladers and even a dog with dyed blue ears.

At the end of the pier nothing feels more all-American than Ruby’s Diner where one portion at breakfast could feed us all.We try surfing — when in Rome and all that. Instructors Ryan and Paul at Toes On The Nose say the aim is for us to be able to stand by the end of the half-hour lesson. Mabel and Naomi both whizz by standing perfectly on their first go.

They are rewarded with a trip to Justice and declare it the coolest clothes shop they have ever been to.

We may have chosen the wrong night for the beach bonfire, but our meal at Watertable at the Hyatt Regency is the best of the holiday. I love my Chilean seabass and my son-in-law raves about the burger made with wagyu and crisp pork belly.

A few months later I ask Mabel what was her favourite thing about the holiday. ‘I really liked that swingy chair,’ she says.

Of course, she did.

Use military precision to decrease stress while travelling. Assign every child to a specific adult. Book airline seats in a vertical rather than horizontal block and agree shifts to entertain children.

Don’t assume the hotel will arrange adjacent rooms. Call before you arrive to make the request. It makes it so much easier for the free movement of children.

Grandparents can claim ‘my house, my rules’ at home but on holiday, parents define the rules. Make sure you get permission before you buy those ice creams.

Don’t do everything together. The advantage of numbers is that it allows one person, or one couple, to go off and do their own thing.

It may feel late for children and early for adults but coming together for supper is one of the best thing about three generational holidays. It’s a case of bonding without the contrived togetherness of Christmas and birthdays.

Don’t just take pictures of the children, get photographs of the whole family together.

Say no to new friends

Keep it strictly family. Grandad’s new best friend may not have the same appeal to the wider family.

Get everyone around the dinner table to describe the best and worst bits of the day. It’s often not what you think it is going to be . . .