A heartbroken mum has revealed how she had a niggling feeling her second son wouldn’t stay alive for long despite enjoying a completely normal pregnancy.

The feeling that something was wrong was so strong Australian mum and nurse Amy Trojer, 31, from Perth, didn’t even throw a baby shower to celebrate Noah’s imminent arrival.

The infant tragically died 12 days after he was born following his grief-stricken parents’ decision to stop the treatment for his OTC Deficiency which had left him with catastrophic brain damage. 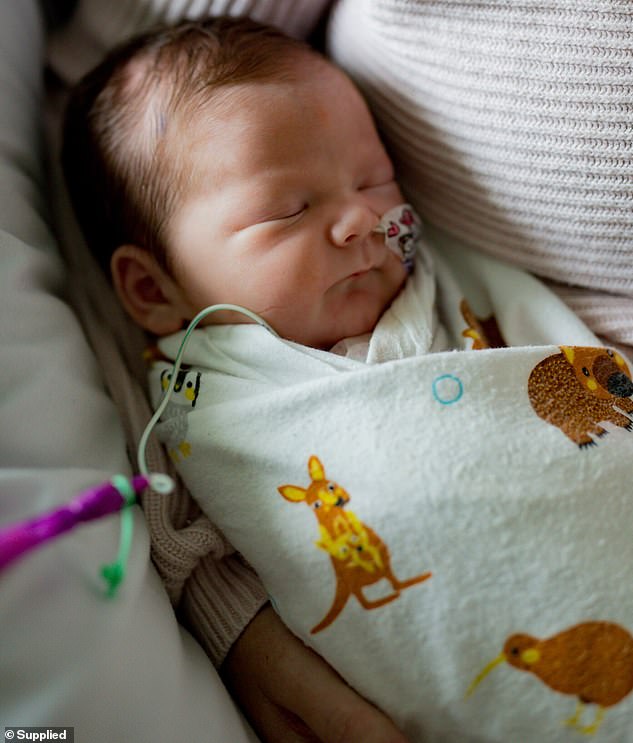 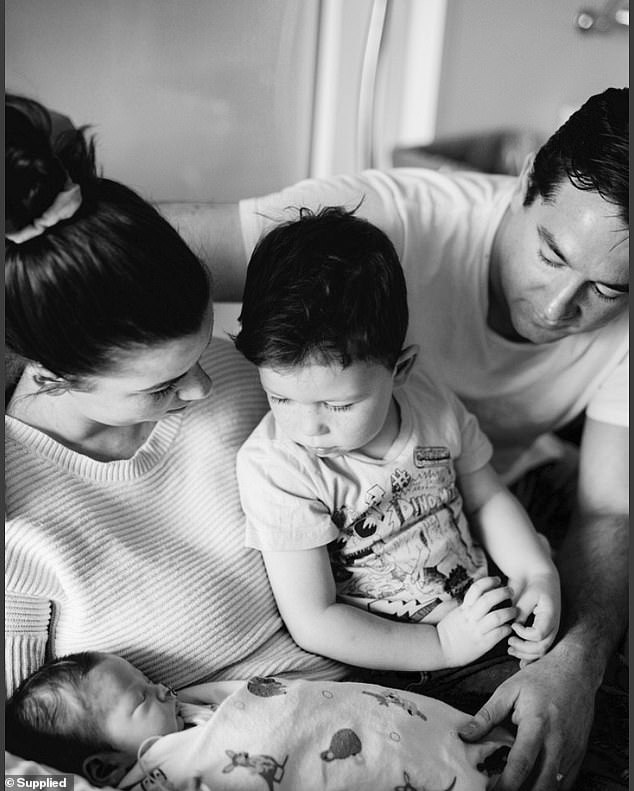 Noah died 12 days after he was born, after his parents made the impossible decision to stop the treatment for his OTC Deficiency which had left him with catastrophic brain damage

Amy told FEMAIL she noticed Noah’s movements slowing down from about 40 weeks in her pregnancy – so at 41 weeks doctors induced her, and her beautiful baby was born.

‘We were both ticking all the boxes, the scans were normal,’ she said.

There was ‘no reason’ for her to feel anxious about the pregnancy – but the feeling stayed with her from the moment she found out their second baby was coming.

It sounds very ‘woo woo’ I know, but I just had this feeling he wasn’t okay and another even stronger feeling that we wouldn’t get to keep him.

Noah was ‘perfectly planned’ as the couple had decided to expand their family, and he was conceived shortly after.

Amy was initially nervous she wouldn’t be able to love a second baby as much as she loved her first son, Hudson, but she was wrong.

‘Immediately I fell in love. So different to my first birth, where that love feeling took a bit longer. I adored this baby from the moment I saw him,’ she said.

‘He had his daddy’s eyes, his brother’s nose and a head full of gorgeous dark hair.’ 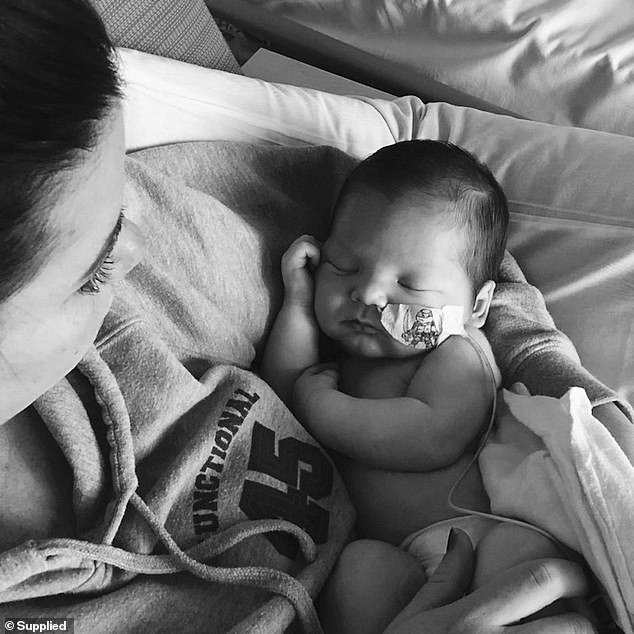 Amy told Femail she noticed Noah’s movements slowing down from about 40 weeks – so at 41 weeks doctors induced her, and her beautiful baby was born

What is OTC Deficiency?

OTC (Ornithine Transcarbamylase) Deficiency is a genetic X-Linked metabolic condition that is usually inherited by the mother.

It’s estimated that 1:80,000 people will have it. In your liver, there is an enzyme called OTC which helps breakdown and remove nitrogen during metabolism. When nitrogen can’t be removed from your body, it builds up into the form of ammonia, which is highly toxic especially to the Central Nervous System.

This can cause symptoms which vary depending on the severity of the deficiency, but includes nausea, vomiting, respiratory distress, seizures, lethargy and coma. The longer the ammonia is left untreated, the greater the effects are on the nervous system.

But Noah started struggling to breath after just a few minutes in Amy’s arms.

Doctors took him from her and days later the family were moved to Perth Children’s Hospital.

‘It’s as though all those feelings I had during pregnancy were validated. I was right, my intuition was right. But I never wanted to be so wrong in my life,’ she said.

Doctors quickly diagnosed his OTC Deficiency, something that affects just one in 80,000 people. 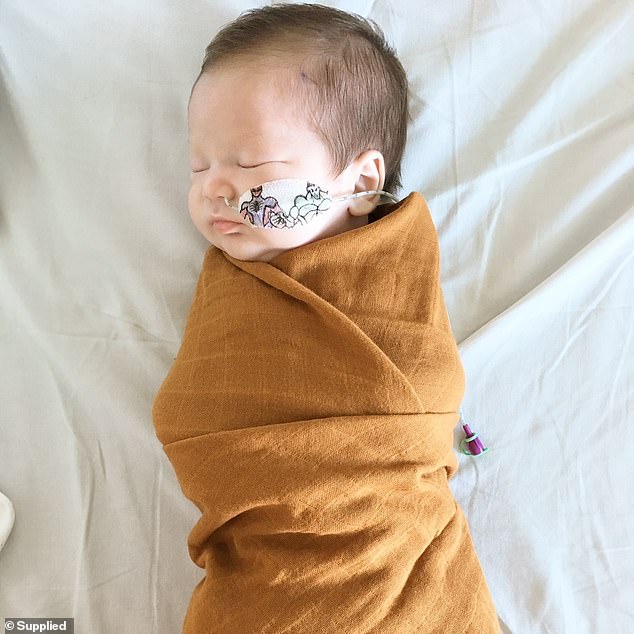 OTC is an enzyme which lives in the liver and helps break down and remove nitrogen during metabolism.

When nitrogen can’t be removed from the body, it builds up as a form of ammonia which is highly toxic to the central nervous system.

This can cause symptoms including nausea, vomiting, respiratory distress, seizures, lethargy and coma.

‘We were reassured that although brain damage was likely, it would be minimal. They were so wrong,’ Amy said.

The normal ammonia level for a baby should be 50, Noah’s was registering at 400.

After treatment his ammonia level spiked to 2,800.

‘He started dialysis to try and clear the ammonia, but ultimately, nothing worked. His MRI when he was eight days old showed “catastrophic widespread brain damage”,’ Amy said. 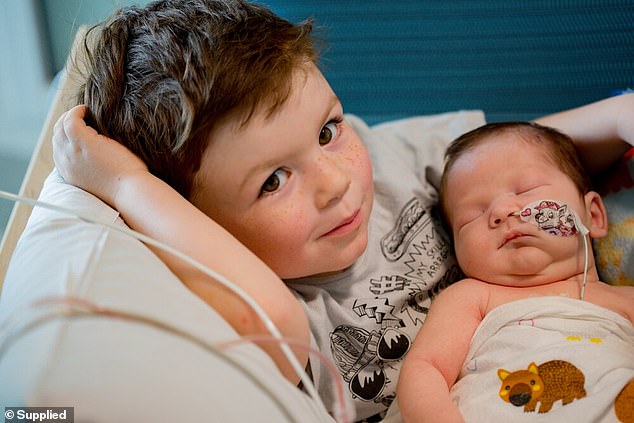 ‘The neurologist spoke in this monotonous tone, like she was reading us menu options and like we really understood or had capacity at that time to process what she was saying.’

This is when Amy’s training as a nurse kicked in and she realised they were treating a dying baby.

‘When we made the decision to transition to end-of-life care, it was one that automatically felt right to me in almost a professional sense,’ she said.

‘There was always this huge desire to be Noah’s advocate and always fight for what was right for him.’

Amy said stopping Noah’s treatment was the most harrowing decision.

‘To agree to stop treating your baby never feels right, I wanted nothing more than to be given other options, more hope. But he was never going to survive, so palliative care was the best option for him. 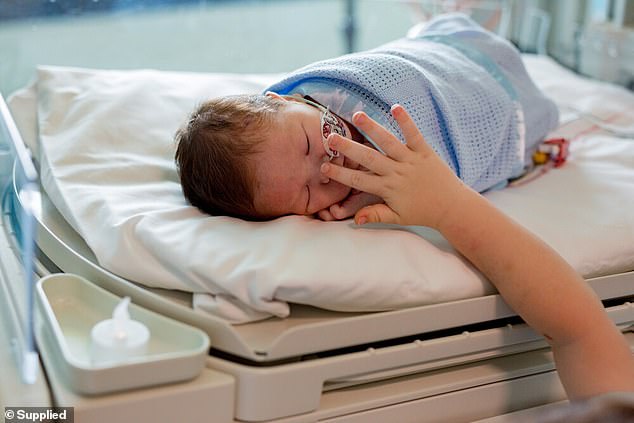 ‘Once we made that decision there certainly was more of a calmness, we felt we could finally enjoy him and give him every bit of love while we still had him with us.’

‘Once we made that decision there certainly was more of a calmness, we felt we could finally enjoy him and give him every bit of love while we still had him with us.’

He deserved kisses, cuddles, to feel the sunshine on his skin. We deserved to hold him closely, feel every little crevice in his perfect face and listen to each and every breath.

After Noah’s death there was overwhelming grief.

Amy was broken, and the whole family dynamic had changed.

She didn’t know how she was going to survive – how she would cope under the weight of her immense sadness.

‘For me, the grief comes and goes in waves. I could go days or weeks without feeling that immense sadness, but it always comes back,’ she said.

She is sharing Noah’s story to help other parents navigating through palliative care or the loss of a baby.

What is the Lily Calvert Foundation and MTM?

The Lily Calvert Foundation was founded in loving memory of baby Lily Sujata Calvert who died at 10 and a half months old.

The aim of LCF is to raise awareness around the importance of paediatric palliative care, and to support those who provide care in this area including through music therapy.

The MTM (The murmuring of ten million)

This is a place on the site dedicated to letting parents share their stories of love, survival and loss.

The site shares diagnosis day stories which feature blogs and interviews of children living with life limiting diagnosis or who have passed away.

‘Losing a child is especially lonely. People generally don’t know what to say, or are afraid they might say the wrong thing,’ she said.

Amy loves to speak about Noah and keep his memory alive.

‘We say good morning and goodnight to him every day. He’s always included in our conversations, he is still our baby.’

Amy shared her story to help other people going through a similar journey or struggling to cope with the loss of a baby.

The story was initially shared with the Lily Calvert Foundation’s ‘The murmuring of ten million’ a page dedicated to sharing first hand accounts of pregnancy and baby loss and stories of children born with life limiting diagnosis.

For miscarriage, stillbirth and newborn death support head here or call the Sands bereavement line on 1300 308 307.