A mother-of-three has revealed how becoming a pole dancing instructor after a series of traumatic events has given her the strength to always battle on – no matter what life sends her way.

Northern Territory-based Kerryn Luby is currently in recovery from early stage two breast cancer, after she lost her son in 2010 and was once threatened by someone wanting to kill her children.

But since taking part in and teaching pole dancing, she has built a stronger body and mind, and it’s also helped her to focus on her needs, according to the 49-year-old.

‘It’s not a sexual activity, it’s a way of looking after yourself in a nurturing environment,’ Ms Luby told FEMAIL.

Kerryn Luby (pictured) turned to pole dancing as a 39-year-old. She credits the activity with not only strengthening her body, but also her mind 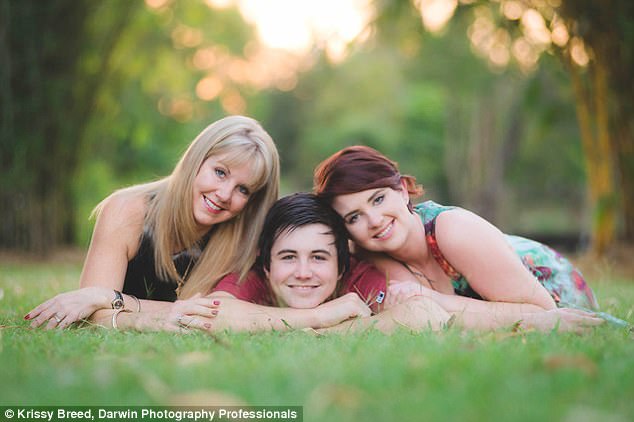 Kerryn Luby (pictured left) with her family. She said pole dancing has not only help her build a stronger body and mind, it’s also helped her to focus on her needs

Ms Luby was unexpectedly diagnosed with breast cancer in December 2016 and has since undergone surgery, chemo and radiation – her cancer is currently in remission.

And while this has meant less time teaching, every week she shows up to her studio, Champagne Fitness, which she opened in 2009, to help women practice their pole dancing moves.

She said she came to the activity, one that’s more aligned with sport than stripping these days, after a traumatic event had left her struggling with ongoing issues from post traumatic stress disorder (PTSD). 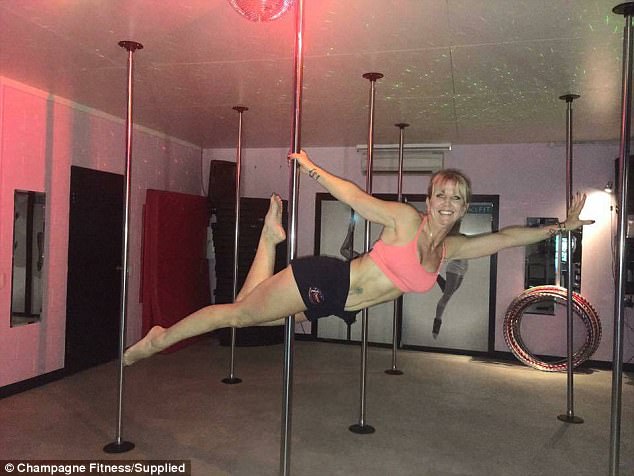 Ms Luby was unexpectedly diagnosed with breast cancer in December 2016, and has since undergone surgery, chemotherapy and radiation treatment.

Touching on details, Ms Luby revealed she had received a letter at work one day, that was sent anonymously, in which the writer had threatened to kill her three children.

She was alone at the time as her husband, who she is now divorced from, was overseas working with the RAAF.

The upbeat music helped relax my mind and gave me energy at the same time. It was also very supportive because it was all women

The letter left her so badly affected that all she wanted to do for the next year was stay at home and protect her kids. She was also placed under the care of a psychologist.

The turning point came when one night some girlfriends invited her to a pole dancing class – something she credits with changing her life.

‘I don’t think you ever overcome PTSD because there are too many big triggers.

‘But you can have plans in place that help you deal with the anxiety, she added.

Recalling the moment, she first stepped into the studio, Ms Luby, then 39, said the small windowless room felt ‘very private and very safe.’ 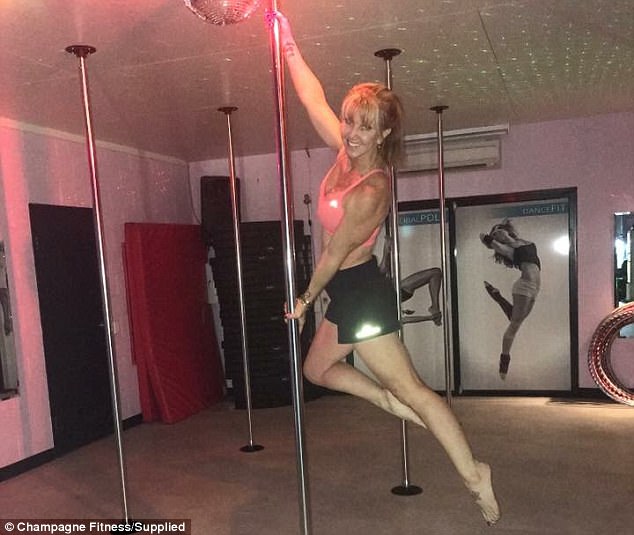 ‘The upbeat music helped relax my mind and gave me energy at the same time. It was also very supportive because it was all women.’

She said she hadn’t done gymnastics or dance, and confessed she was completely uncoordinated, but she was so taken by the experience she kept coming back.

In fact, she loved it so much that within 12 months of taking it up, Ms Luby decided to train as a teacher and an idea for a new business venture started to form in her mind.

Ms Luby explained at the time she had to drive 23 kilometres from her home in Palmerston, in the Northern Territory, to a studio in Darwin city centre. 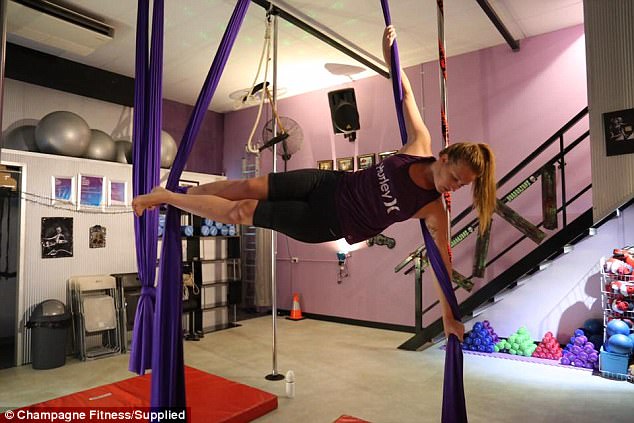 As well as pole dancing, women at Champagne Fitness can take classes in trapeze and aerial silk yoga

So when a commercial property came up for sale near her home, she said she jumped at the chance to buy it and open a studio of her own.

In 2009, she opened Champagne Fitness, a place where she has since taught pole dancing most evening and weekends.

But there were some difficulties at first.

‘Initially, when we opened, we were constantly fighting the perception that only strippers pole dance. 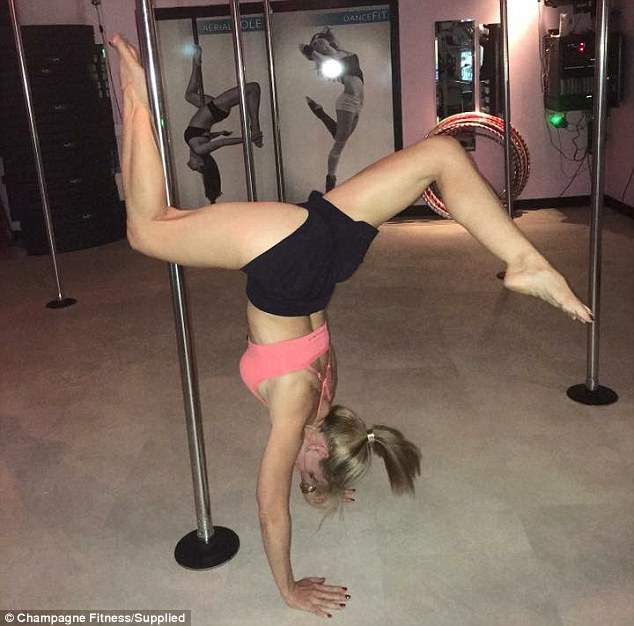 To overcome this, and to gain some extra credibility, she trained as a personal fitness instructor. Eventually, business ‘exploded.’

Ms Luby puts this success down to the studio’s environment, in which age, size and ethnicity is no barrier to taking part.

‘It’s such a nurturing environment,’ Ms Luby said of her studio. ‘And our cellulite always looks amazing!’. 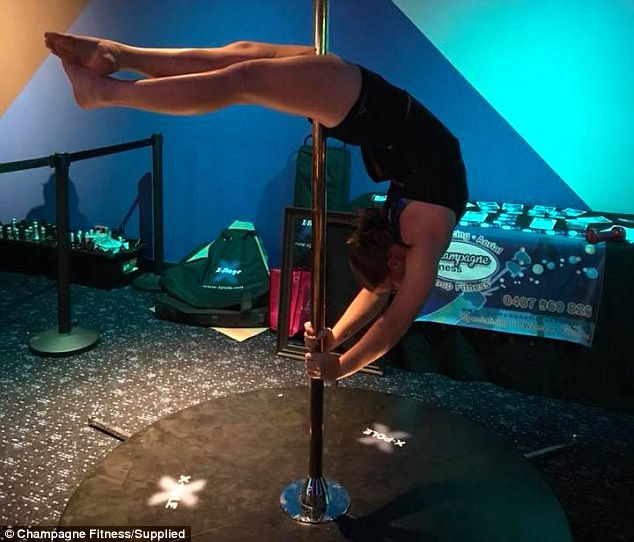 Within a year, Ms Luby trained as a teacher and opened her own studio teaching others

Despite her many struggles, Ms Luby maintains pole dancing has seen her through, not only because it has helped her feel more confident, but also because it gives her an opportunity to help others.

‘What I get out of seeing girls and women achieve things they can’t is an amazing feeling for me.

‘I believe anyone can do anything they want to do, if they put their mind to it.

‘Even though getting through has been tough I have always thought about people who love me, she said.

‘And I have got a lot of my love from my studio, and the women who surround me.’