A mum has been left devastated after the $200 Wiggles birthday cake she ordered for her son’s birthday party arrived slanted and tasted ‘awful’.

The busy mum from Brisbane revealed she cried and swore in front of party guests when she saw the ‘disastrous’ cake on the weekend.

She had ordered the cake after seeing amazing examples of the baker’s work – but has since realised the images belonged to another baker.

Instead of a stunning, brightly-coloured cake scattered with lollies and topped with lollipops the woman received a ‘dry sponge with cream that tasted like butter’.

‘I literally cried,’ the mum revealed in a party-planning group on Facebook.

The baker had been given ‘weeks of notice’ according to the disappointed customer – but only managed to deliver a leaning tower or ‘awful tasting cake’ covered in thick, uneven layers of fondant.

‘My mum received the cake as I was extremely busy doing a million other things,’ she said.

But her mum didn’t check the cake when she took it from the baker.

‘She came in and said ‘you’re going to be furious’. When she showed me I literally swore in front of all the party guests and started crying,’ she said.

And others could sympathise with her disappointment.

‘My heart hurts for this poor mother, I would feel sick if this happened to me,’ one woman said.

‘As if she actually handed that to you, a Coles cake would be nicer than this,’ another mum said. 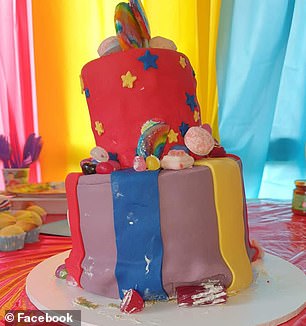 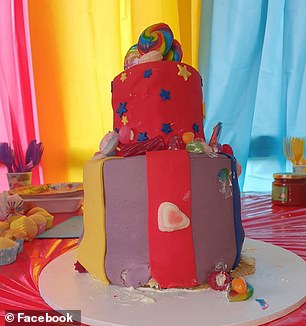 The angry mum, from Brisbane, Queensland said the cake didn’t even taste nice 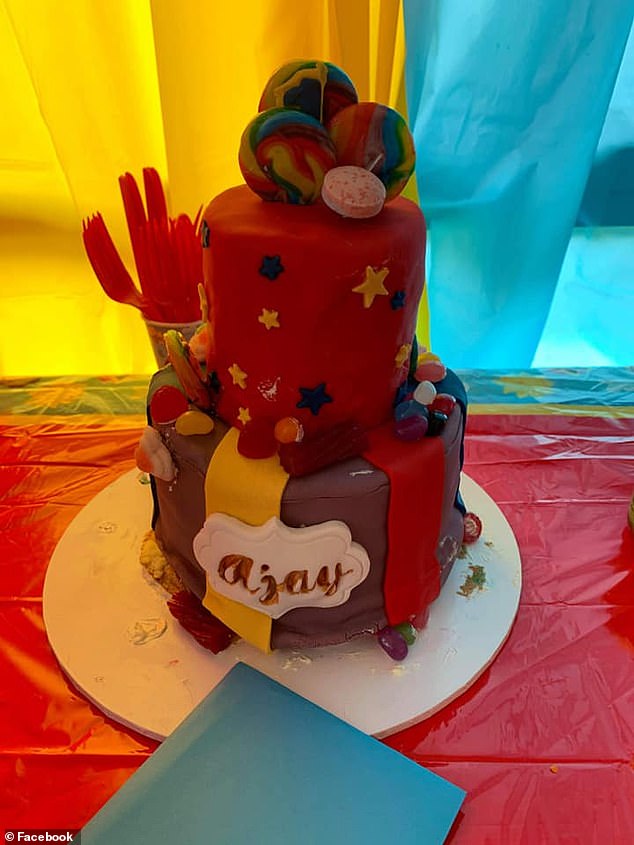 ‘I would be demanding a refund, that is disgusting work,’ one woman said.

Even bakers voiced their disappointment over the cake and questioned the legitimacy of the woman’s business.

‘This cake would not have left my place. I would be demanding a refund. If it’s a no go I would be contacting my local food safety agency,’ one woman said.

‘There is definitely a big ass fine waiting for her if she is selling food from her home unlicensed, and probably uninsured as well.’

And while some criticised the mother for spending $200 on a cake – others said for a two-tiered cake the price was reasonable, but not for the cake she was given.

‘$200 should definitely get a better cake than that. This one is such a disaster. I’m hurting for the mother,’ one cake lover said.

‘Regardless of the price that shouldn’t be sold. That’s terrible. How disappointing for you, $200 is still a reasonable fee. I understand the cost of cakes completely as the time and cost of ingredients is high for cake makers. That cake is unsellable in my opinion.’

The mum shared photos of the work the baker had previously advertised, one eagle-eyed baker noticed a watermark on one of the pictures and confirmed the baker who owned those photos worked from Texas.

‘If she is advertising someone elses cakes as her own then this is fraud,’ one baker said.

The mum said the baker blamed her for the cake’s disastrous lean.

‘I have messaged the lady and she’s already refusing to take any responsibility,’ she said.

DO HOME COOKS NEED TO BE REGISTERED?

Home business which sell food directly to the customers are regulated by councils.

From 1 July 2018, local councils will regulate all domestic kitchens where food that will be sold directly to the final consumer is prepared.

The NSW Food Authority will continue to regulate domestic kitchens that only sell food to other businesses, such as cafes, restaurants and supermarkets.

When a food business sells direct to the final customer (e.g. from the premises or from a market/school canteen etc.), local councils will regulate these home-based businesses (unless manufacturing high risk foods, see note above). The business needs to notify the local council of their business and food activity details. Notification is satisfied via applications to local council for services, permits and approvals.

There also food safety requirements for people operating from the home. These include food safety courses and certificates allowing them to cook for people and inspections of their kitchens.

One mum who makes cakes for friends and family for a hobby was outraged. She said she stays away from fondant because she is not yet confident with it.

‘If you are not skilled in something, do not charge for it! get your skill level up,’ she said.

One cake decorator said $200 is considered a low price in the industry for a two tiered cake – and served as a clue to the mother the business was not registered.

‘This is in no way the customers fault and decorators should stop trying to blame them,’ she said.

NSW has strict rules for businesses making and selling food, even those doing it from home ‘as a hobby’ or to make some extra income.

People must still comply with the state’s food safety requirements, have a food safety supervisor certificate and be ready to have their premises checked at anytime by authorities.

‘Councils regulate home-based businesses when a food business sells direct to the final customer and may conduct inspections for food standards and other council environmental regulations,’ according to the NSW Government.