Mum reveals why she let her 12-year-old son SWEAR at an elderly woman at the supermarket checkout: ‘She deserved it’

A mum has been praised for letting her 12-year-old son swear at an old woman while waiting at the supermarket checkout.

Mum Sandy took her three kids aged five, eight and 12 on a quick grocery shop while her husband was in isolation and revealed her middle child has autism.

‘[My eight-year old] is on the spectrum and has trouble in places like grocery stores, so I gave him an iPad with cellular and over the ear headphones – he should be good to go… he doesn’t like loud noises or strangers touching him,’ she wrote on Reddit.

While in line, Sandy claims an old woman started complaining about kids and technology and scolded the eight-year-old, bringing him to tears.

In response, the oldest child turned to the woman and said: ‘You stupid b**ch, he’s autistic’.

Sandy would normally scold her children for swearing, but instead she praised him for standing up for his brother – and others agreed with her.

Mum Sandy took her three kids aged five, eight and 12 on a quick grocery shop while her husband was in isolation and revealed her middle child has autism (stock image)

Should the 12-year-old have gotten away with his language?

‘While in line, [my 12-year-old] is a lot of help with his brothers, so he’s trying to help me with [my five-year-old] throwing junk food in the cart. I decided to go to the cashier’s checkout, and then the line was long,’ she said.

At the time her eight-year-old son was enjoying watching cartoons with his headphones in, but then an old lady behind them started getting upset.

The older lady started attempting to get the attention of the eight-year-old boy.

‘I don’t want to startle him, so 12 moves between them. But five is looking at more cookies,’ she said.

‘The old woman told me my kids were rude, ignoring her. She taps on my 8-year-old, and I pull him aside,’ she said.

‘He looks up from his iPad and takes his headphones off to see if something is wrong. I’m trying to get his headphones back on, and the old woman says these types of things are for at home only, and I need to teach my kids to interact in public.

‘She tells 8 he’s old enough to know better than to act like this, Scolding him. Loudly publicly and in the middle of the store.’

The child started to cry and had ‘first signs of a meltdown’; the 12-year-old then swore at the woman. 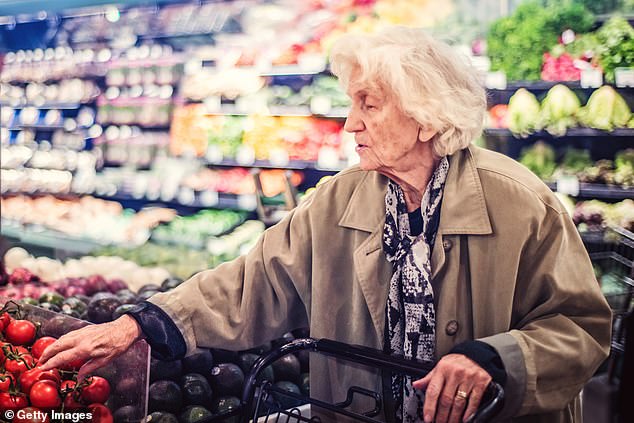 In response for making the eight-year-old upset, the oldest child turns to the woman and says: ‘You stupid b*tch, he’s autistic’ (stock image)

‘While I usually would tell 12 off because I have more issues to deal with. The old lady wants to talk to security and starts making a scene about my kids screaming they called her a b*tch,’ Sandy said.

‘I finally leave a full cart of food there and leaves Security tried to stop me, saying I had to get 8 to the car.

‘He has autism, and he’s going to have a major meltdown. 12 talks to security and tells him about the old lady in line.’

After sharing the story on Reddit, others praised the boy for his defensive actions.

‘The lady had no right starting drama over something that did not include her at all,’ one person wrote.

‘Sometimes protecting family is more important than being polite when the other person assumes they have privileges because of their age. I think people forget touching strangers is assault,’ another added.

Others suggested speaking to the 12-year-old privately about swearing and said it was inappropriate in any scenario.