An Australian mum has sparked debate with a photo of her children’s lunchboxes filled with chips, chocolate and custard.

The woman, who shared images of the daily treats to Facebook on August 1, prepared a number of healthy storage containers with snow peas, fruit and a trail mix in them, combined with a few processed snacks.

‘Riley requested ham and cheese mini croissants and Blair requested triangle Nutella sandwich as always. Both Shaun and Connor both have mini versions of this.’

The woman, who shared images of the daily treats to Facebook on August 1, prepared a number of healthy storage containers with snow peas, fruit and a trail mix in them, combined with a few processed snacks

While plenty of parents praised her efforts to pack a balanced lunchbox others didn’t take kindly to the amount of ‘plastic’ in it.

‘That’s a lot of food and junk,’ one woman wrote.

‘Gosh we are a plastic world hey. I remember in primary the kids had to take all wrappers home so I guess that’s still in place,’ said another.

A third added: ‘We never had all the package foods and least of all chocolate. Savoury is the best with good fruit and veggies’.

The mother replied: ‘Guys if you don’t like it just scroll on it’s not hard. I don’t need to explain myself or my family to anyone here, I do what’s best for us and that’s all I care about’.

Dietitian Susie Burrell, from Sydney, said there are many foods you should be including in your children’s midday meal, but she finds it easiest to follow a quick and easy four-step formula.

‘With my twins back to school, I thought a little lunchbox inspiration may be handy for parents,’ Susie posted on Instagram. 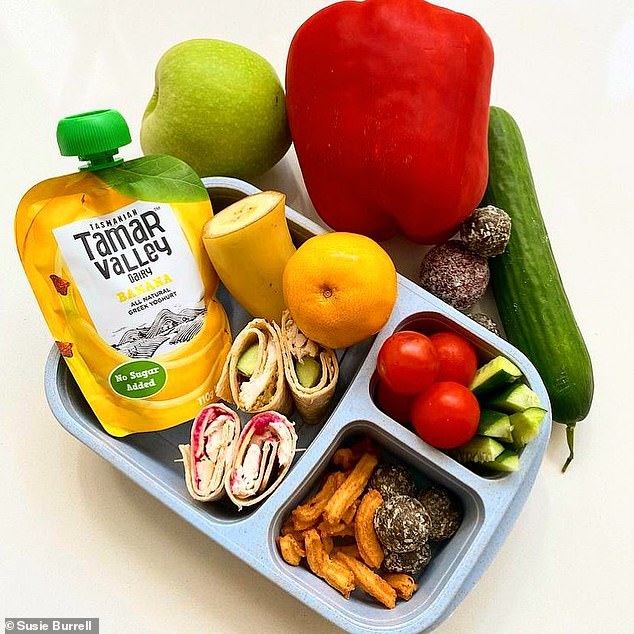 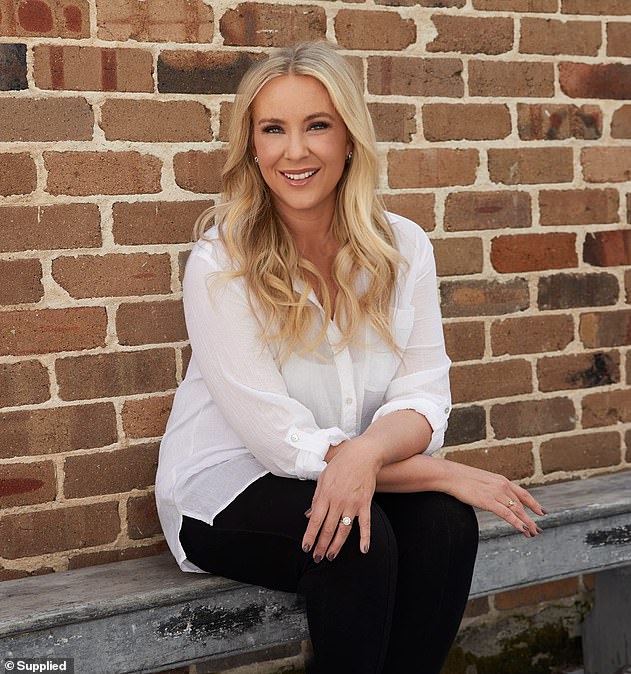 Susie Burrell (pictured), from Sydney, said there are many foods you should be including in your children’s midday meal, but she finds it easiest to follow a quick four-step formula

What is Susie’s four-step formula?

1. Sandwich, wrap or salad with some form of protein..

3. Protein-rich snack such as yoghurt or cheese.

4. Something fun or ‘yummy’ like homemade protein balls, healthy chips or biscuits.

Susie’s formula means you should always ensure you have a sandwich, wrap or salad with protein in their box, as well as fruit and veggies, a protein-rich snack and one ‘fun and yummy item’.

This particular week, Susie is feeding her twins two wraps with chicken, cucumber and hummus as their main meal.

The twins will then enjoy some yoghurt, cherry tomatoes, cut-up cucumber, a satsuma and half a banana for their healthy snacks.

Their ‘treat’ is homemade protein balls and healthy chips.

On others, she’ll do shredded chicken with avocado and tomatoes or a homemade overnight oats bowl.

The most important thing with this element of the box is that it has some protein to keep kids full for longer. 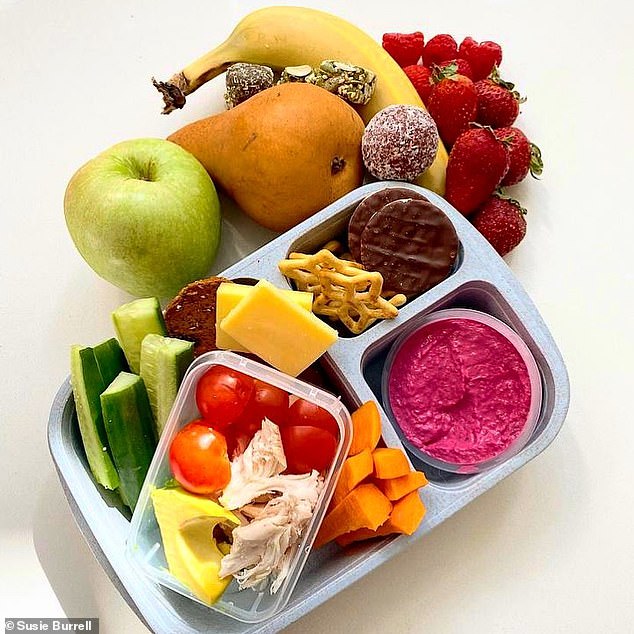 The most important thing with both your kids’ meals and snacks is that they have plenty of protein in them (lunchbox pictured), as this is what will keep your kids fuller for longer

The main mistake that parents make with their kids’ lunchboxes according to the dietitian is overloading them with too many carbs.

While Susie does admit that carbs such as bread, rice, cereal, pasta, fruit, jams and honey are vital for brain function – and particularly for active children – she also said that often these carbs are processed, and so not as good for their overall health.

‘A quick scan of a typical lunchbox will generally reveal some type of sandwich or wrap, a piece of fruit or two, occasionally a vegetable along with several packaged snacks,’ she previously told Essential Kids.

‘While on the surface this lunchbox mix would tick the box for carbohydrate rich foods, processed carbohydrates are completely dominating the mix at the expense of protein rich foods and good fats.’

Susie explained that the issue with processed carbs is that they are digested very quickly, which can drive up kids’ hunger levels later and make them overeat when they get back from school.

If they eat too many carbs and don’t do much in the way of activity, children could also put on weight. 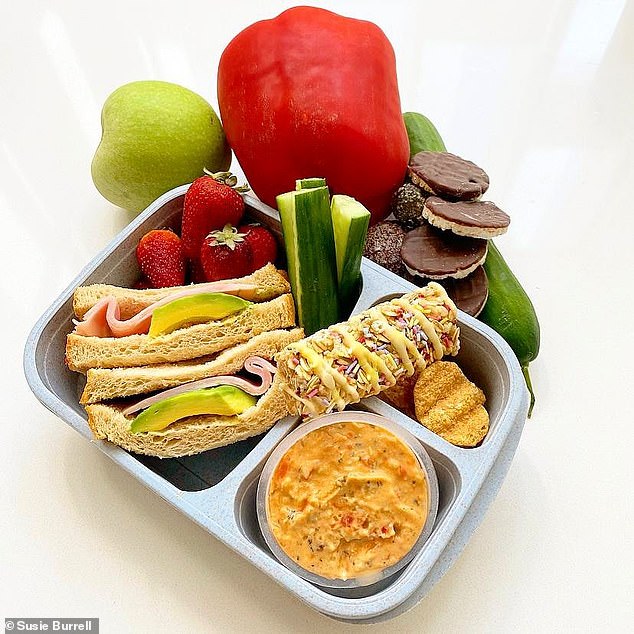 The main mistake that parents make with their kids’ lunchboxes according to the dietitian is overloading them with too many carbs; you need to avoid this (ideal lunchbox pictured) 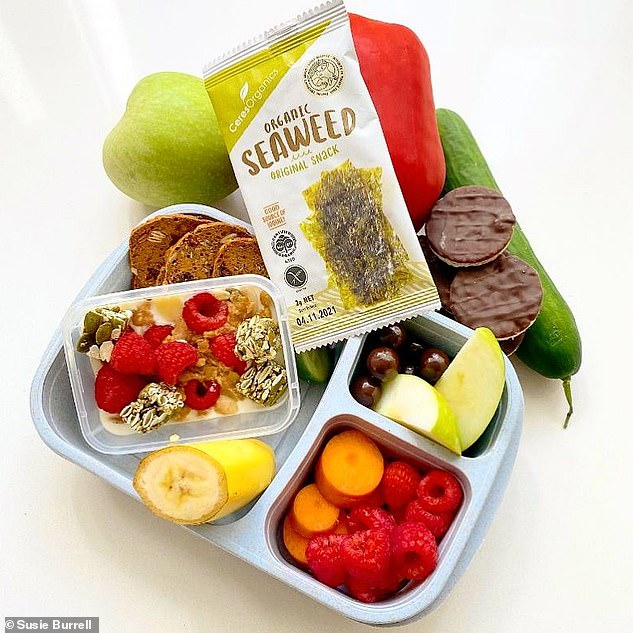 The dietitian added that the solution to the lunchbox problem is simple: include much more protein in their midday meal and encourage them to have a break food early on in the school day to manage their appetites.

For morning break, Susie recommends a vegetable and protein-rich snack to keep hunger locked up until lunch and later in the day – something like baby cucumbers, tomatoes, chopped carrots and hummus.

She also said you should only send one piece of fruit in with them per day and limit carb-based snack food.

‘Ensure your child’s recess includes a protein rich food. Good choices include child sized yoghurts that contain no added sugar, cheese and crackers, roasted broadbeans or chickpeas, a boiled egg, a mini wrap with a little ham or chicken or cheese or a homemade protein ball (minus the nuts),’ Susie said.

A reasonable serving of protein for a child is between five and 10 grams per serve.