The shattered parents of a teenage girl who died at home after a long and painful battle with a rare cancer have opened up about the ‘happy and strong’ 18-year-old’s heartbreaking final hours.

Sienna Martucci succumbed to Ewing’s sarcoma, a rare cancer that forms in and around bones, in Perth at about 6am on April 21 – almost two years after doctors first found a 30cm tumour inside her chest that looked like a ‘big slab of meat’.

The family now fear she had actually been suffering with cancer for three years before it was detected, but it was deemed to be an innocent bad back.

Throughout her excruciating ordeal, the youngster underwent countless rounds of chemotherapy that ravaged her body, had four ribs removed and three litres of fluid drained from her chest when her one of her lungs started collapsing.

She was elated when she was cleared of cancer twice and deflated each time she was told the tumours had returned, but her mother Natalie Martucci, 49, told Daily Mail Australia her daughter’s spirit never broke.

On her last night alive, the crestfallen mother-of-four believes Sienna knew she was dying when she grabbed her hand, squeezed it tight and said, ‘help me, Mum’.

Pictured: Sienna Martucci before she was diagnosed with cancer. Her mother said she was devastated about losing her hair 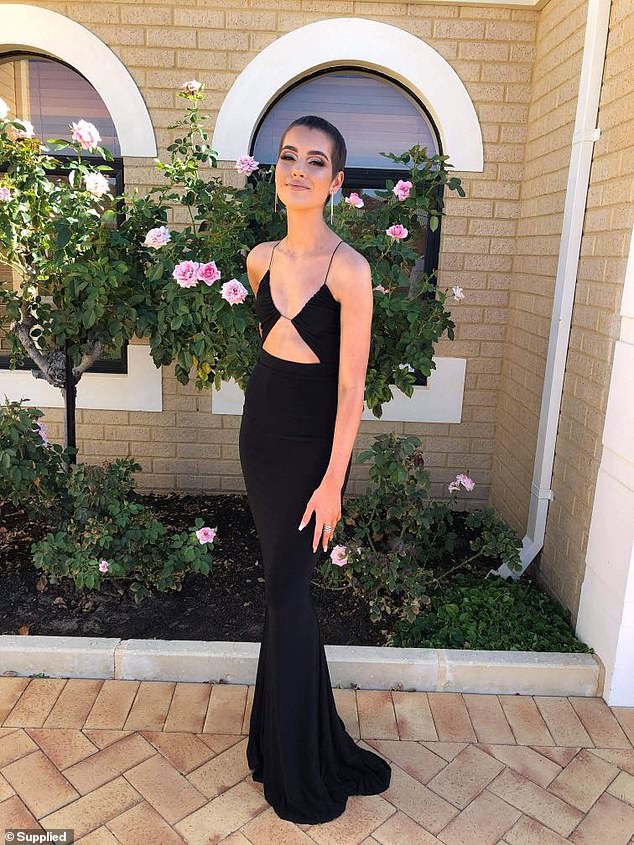 Pictured: Sienna Martucci after finishing high school in 2020. She died from cancer the following year 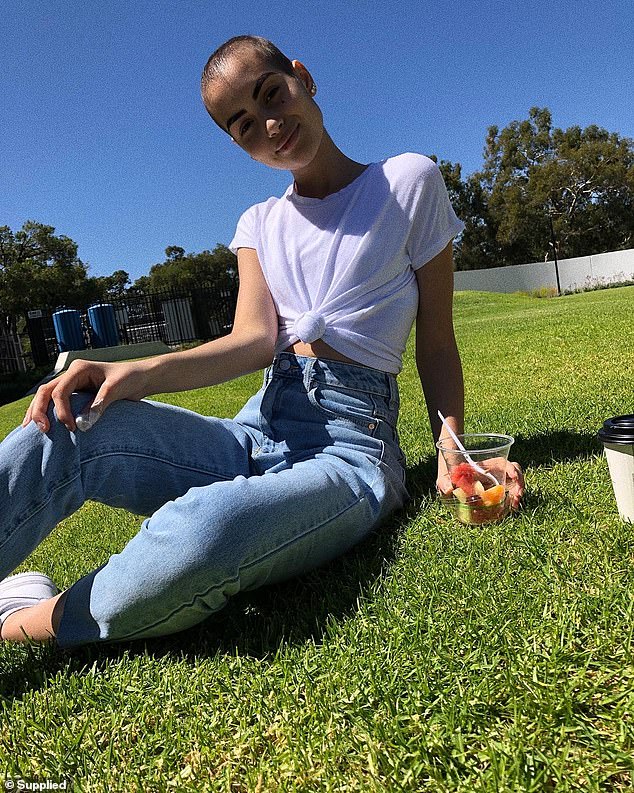 Sienna Martucci has been remembered by her family as a strong and courageous woman who never gave up hope, despite her terminal diagnosis

‘She clung on to my hand for dear life,’ Mrs Martucci said.

Just two weeks earlier, Sienna was given the heartbreaking news that new tumours on her spine, spleen, liver and in her esophagus were incurable.

Determined not to die in hospital, the family organised for oxygen tanks, pain medication, and a hospital bed to be delivered to their home to help Sienna feel more comfortable during her final days.

On the evening of April 20, Mrs Martucci said her daughter’s colour was changing, her lips were turning pale and – too sick to eat – her weight was dwindling.

Her parents tucked her in and said ‘I love you’, turned the lights out and tried to go to sleep, but all Mrs Martucci could do was listen to her daughter’s wheezing.

At 3am, Sienna started wrestling in bed, tried to move her legs out from under the covers and said, panicked, ‘Mum, I have to go’. 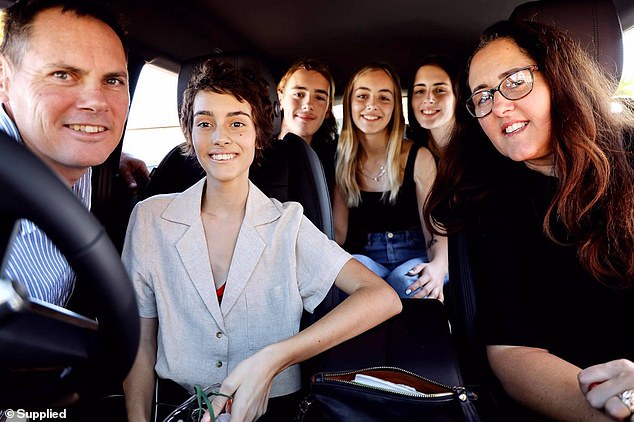 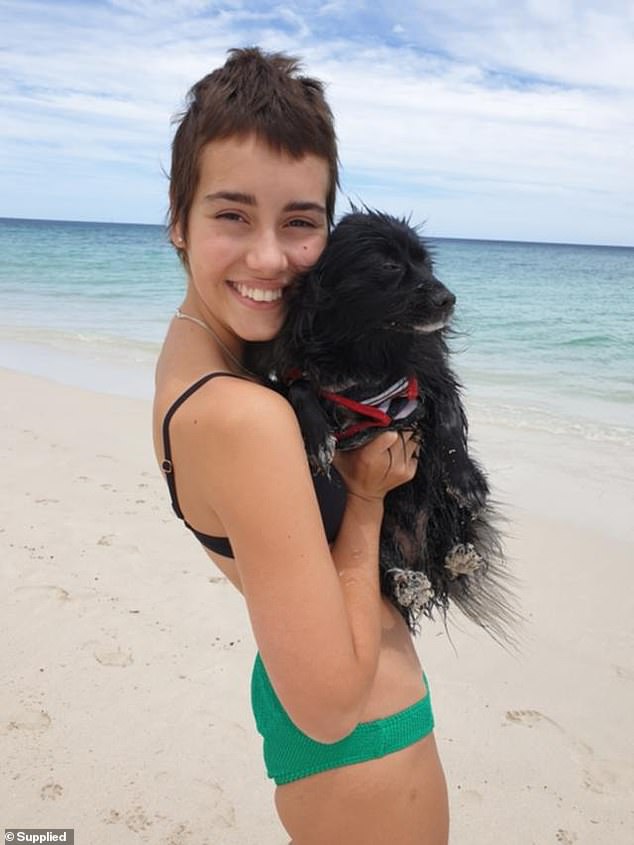 Pictured: Sienna with her dog Pablo. On the night she died, Pablo stayed with her until she picked him up and said ‘I love you bubba’ 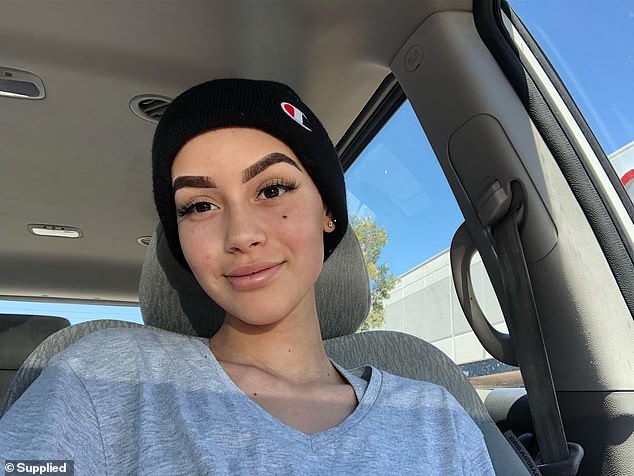 Before the diagnosis was terminal, Sienna (pictured) was more concerned about losing all her hair

The teenager wanted to go back to hospital because she was concerned her oxygen wasn’t turned up high enough, but it was turned up as high as it would go – she couldn’t breath properly because her lungs were starting to fail.

After convincing Sienna to get back in bed, her mother stayed by her side and stroked her arm. On-call nurses came to inject more pain killers to help the teen relax, but she was fidgety and agitated and couldn’t calm down.

She was struggling to breath when she pleaded with her mother for help.

Unable to alleviate her daughter’s pain, she sat with Sienna for hours and watched her rickety breathing, before crawling back into bed.

‘I must have dozed off because I suddenly woke to her saying “Mum” really loudly and clearly, like she was telling me to hurry,’ Mrs Martucci said. 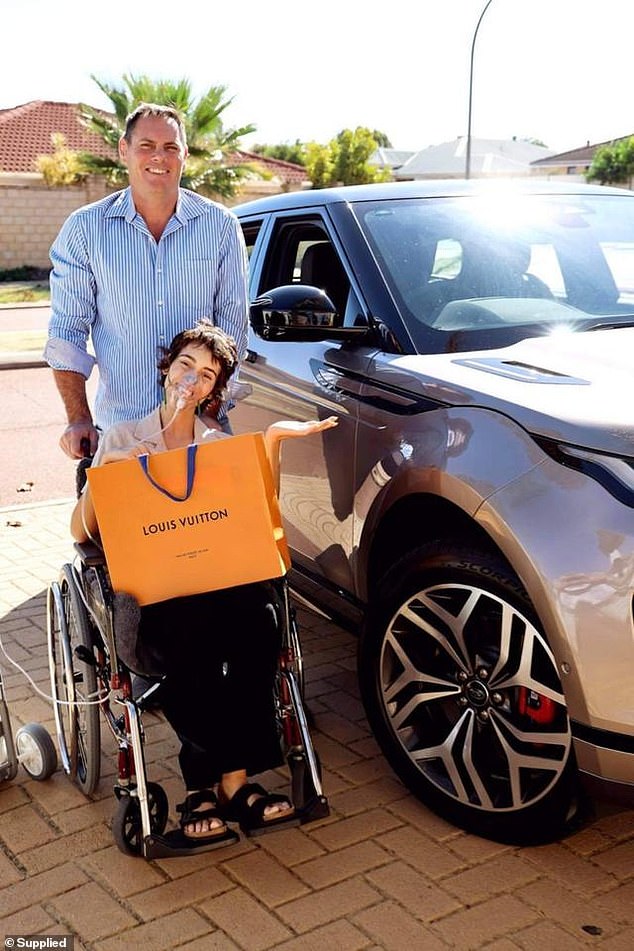 Two days before she died, the Make A Wish foundation gave Sienna a Louis Vuitton bag with her initials embossed on the front, and a ride in a Range Rover – her favourite car 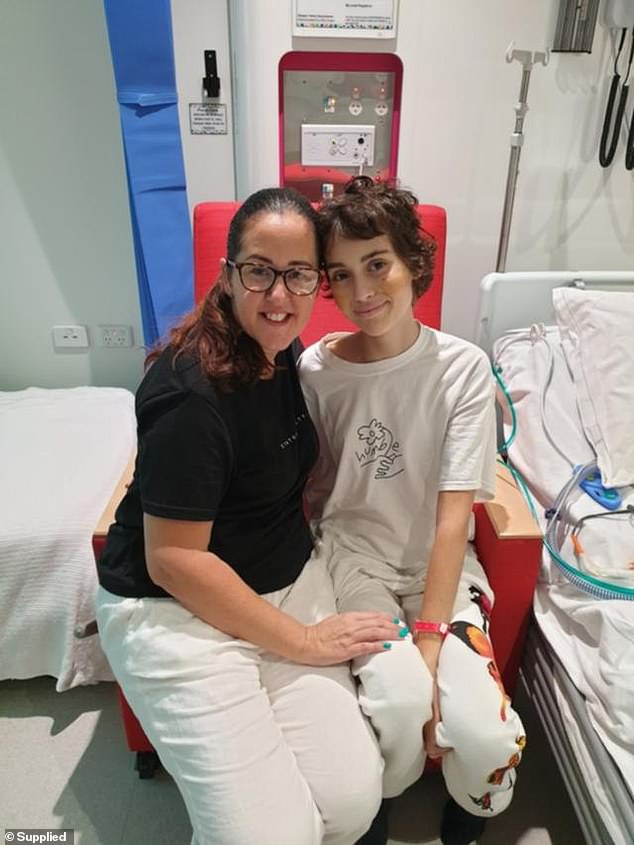 Pictured: Sienna Martucci and her mother Natalie in Hospital. Natalie and her daughter had deep conversations in hospital, but Sienna always made her laugh afterwards by pulling a silly face 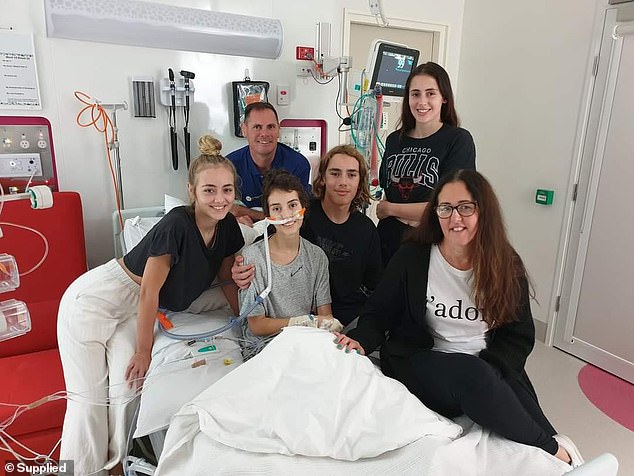 Both parents jumped out of bed and try and calm her down, which they often did by placing a hand on her heart to help her feel safe.

‘The sun was staring to come up, and I put my hand on her heart and I could feel a slight murmur. I thought I was losing it. She was still warm, but then I touched her cheeks and I panicked because her oxygen mask wasn’t on,’ Mrs Martucci said.

Sienna often lifted her mask to wipe the condensation from around her nose, and the mother was terrified that she had lifted it and couldn’t put it back.

‘I said, “oh my god honey your mask is off”, so I went to put it back on and my husband out his hand on her heart and asked me if he should do CPR.’

Her father looked at his wife and said: ‘Hon, I think we’ve lost her.’

The surviving Martucci children Brittney 21, Imogen, 17, and Evan, 13, all awoke to their parents screaming while holding Sienna’s lifeless hand that morning. 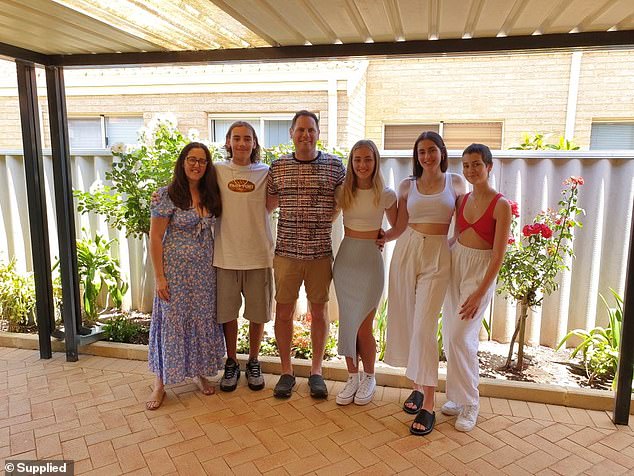 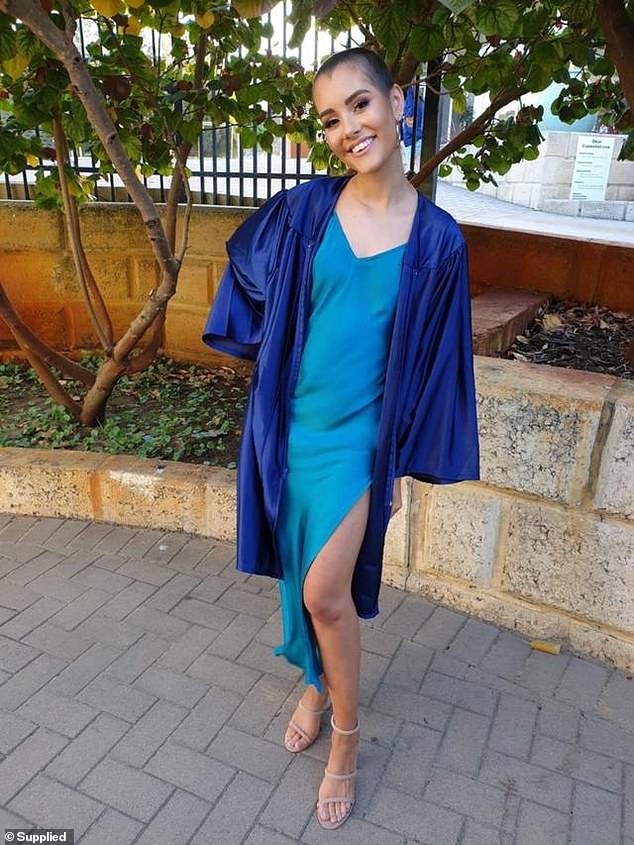 Pictured: Sienna Martucci at her Year 12 graduation in 2020. She also had a job and a drivers licence

The mother-of-four will never know if her daughter moved the mask and couldn’t put it back, or if she removed the mask because she knew she was dying, but is glad Sienna died with her family – surrounded by love.

‘It’s the most painful thing watching someone you love to bits in that much pain, it rips your heart in half, but Sienna always had a smile on her face – even after vomiting she was smiling again – and she tried to stay strong for me,’ her mother said.

‘She told me that she would rather it was her who had cancer because she didn’t want anyone else to go through what she was going through – she was inspirational, and she never let the cancer get her down.’

While Sienna was diagnosed with cancer in 2018, her parents believe she was suffering with the illness for up to three years before it was detected. 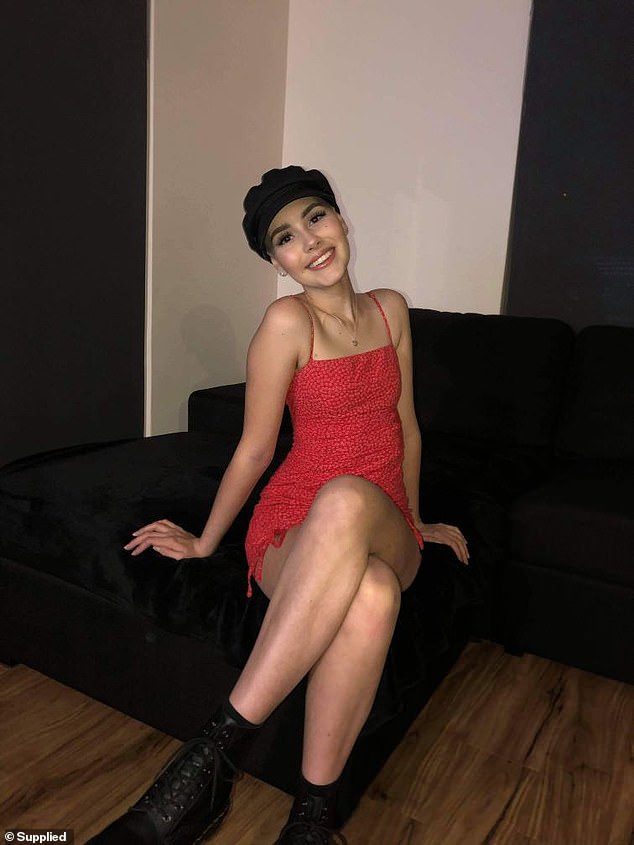 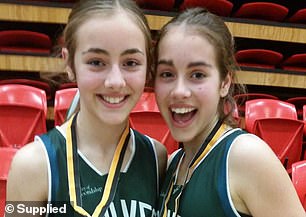 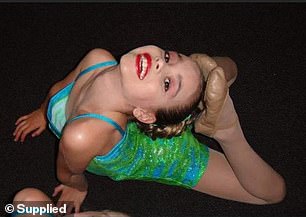 As an energetic teenager who played basketball for Western Australia and loved dancing, she often complained about pain in her back – a likely symptom of the tumour that was initially attributed to growing pains.

‘We tried to get it x-rayed but the hospital wouldn’t do it – it wasn’t until we took her to a local emergency clinic that she was tested and finally diagnosed, but it was almost too late by then,’ her mother said.

Mr Martucci tried to massage the pain away and they took her to a chiropractor.

‘I was massaging a tumour and I never realised it,’ Mr Martucci said.

After her first cancer diagnosis at the age of 16 in 2019, the teenager underwent six rounds of chemotherapy to shrink the enormous tumour, had four ribs removed and radiation therapy. 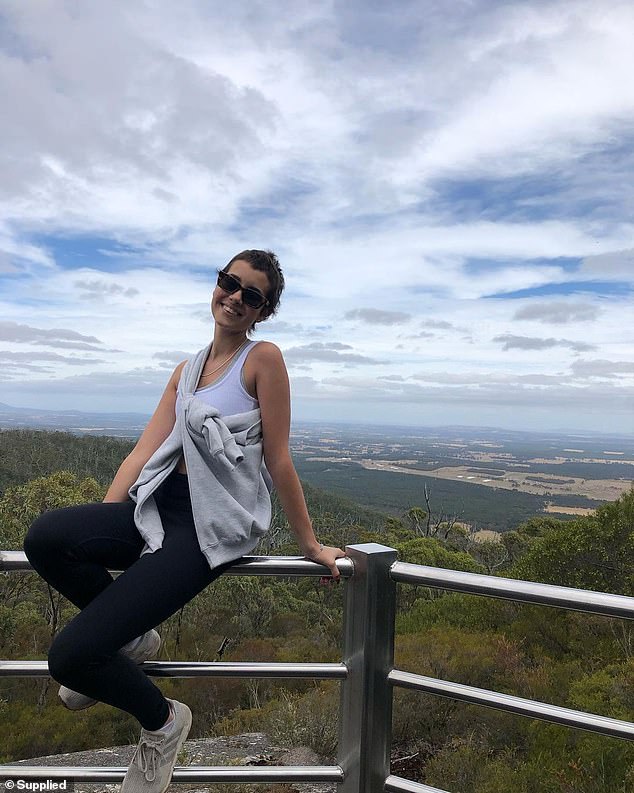 Sienna s given the all-clear twice, before she was given the heartbreaking news the cancer was back

She was given the all-clear in November 2019, but a checkup in May last year showed a spot on her spine.

The spot was treated with radiotherapy and she was cleared of cancer again in November 2020 – before she graduated high school and went on a trip with her friends to celebrate.

But it wasn’t until a routine checkup in May this year revealed new spots on her lungs, spine and near her spleen that her health started to decline.

With nothing left to lose, Sienna was involved in an experimental chemotherapy trial where she took 20 tablets a day for two months – but the treatment didn’t work.

On April 4, Mrs Martucci took her daughter to hospital for a CT because she was having trouble breathing. 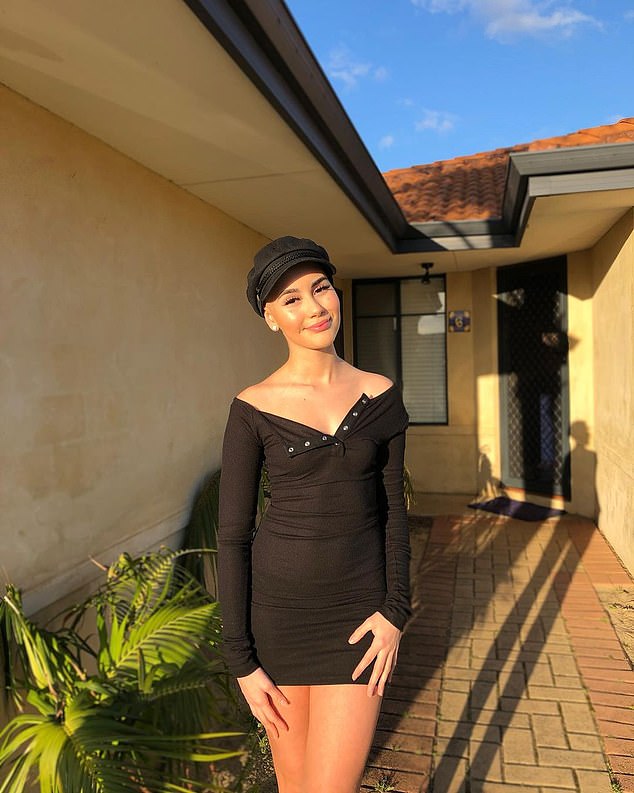 The scan revealed that more tumours had grown in her body, including one between her right lung and oesophagus that measured 7cm, and fluid around her right lung because it was collapsing.

The couple are now preparing to Sienna’s funeral on Monday, but want to encourage other parents to fight for a second opinion if their child is in pain.

‘If yuor child is complaining of symptoms, a persistent nagging problem, there’s got to be more to it,’ the father-of-four said.

‘By the time Sienna’s tumour was diagnosed, it was destructive to her body – don’t let things slide, go with your gut and get a second opinion.’

A Go Fund Me campaign was set up to help pay for Sienna’s funeral service, and all remaining funds will be donated to cancer organisations Sock it to Sarcoma and ANZSA – the Australia and New Zealand Sarcoma Association.

It is a primary bone cancer that can develop anywhere in the body, but is usually found in the pelvis, upper arm, thigh bone or ribs.

The causes of Ewing’s sarcoma is unknown, however it is suggested that it could be caused by rapid bone growth. This may be why it is often found in teenagers.

Pain is the most common symptom of Ewing’s sarcoma. This depends on where the cancer is located. There may be some swelling over the site, or it may be sore to touch. Sometimes because the bone is weakened from the cancer, it can break easily. This is sometimes how people find out about their cancer.

In some cases, a Ewing sarcoma tumour will show up as a lump or swelling – these are most easily identified on the arms or legs – but the most common symptom is pain.If there is a lump, it might feel warmer than the rest of the body, and in some cases, symptoms of fever or illness will also present.