A woman who shed a staggering 35 kilograms has spoken about the shock of being left with crippling anxiety after reaching her goal.

Kylie Cassidy, 35, a mum-of-three from Wellington, New Zealand, once tipped the scales at 92 kilograms.

While losing weight came relatively easily and was achieved through diet and exercise, Kylie, then aged 23, said she spent the next 13 years constantly worrying she’d regain it all – and she’d lose the approval of friends and family.

‘Funnily enough, I felt full of confidence when I was overweight,’ Kylie told FEMAIL. 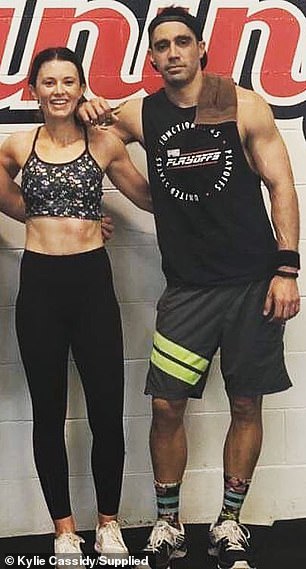 BEFORE AND AFTER: Kylie Cassidy (left and right) once tipped the scales at 92 kilograms, however, after embarking on a weight loss journey she shed 35 kilograms

‘There was the odd comment but I didn’t care about it. I was quite happy and my partner loved me for who I was.’

Kylie said she while she had always been a ‘larger girl’, she didn’t think of herself negatively and, in fact, considered herself to be happy, healthy and confident.

However, after the birth of her first child at 19, extra weight began creeping on, a problem she said was caused by a bout of post-natal depression. 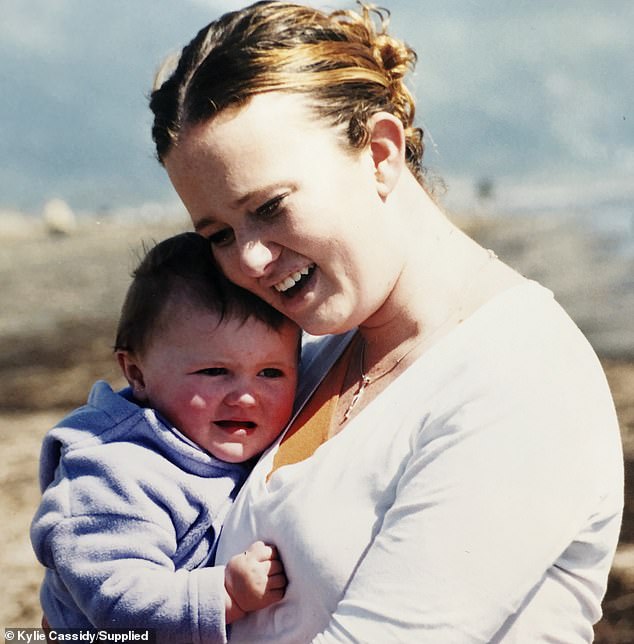 The mum-of-three said while she had always been larger, she didn’t think of herself negatively and in fact considered herself to be happy, healthy and confident

‘When my daughter turned 18 months old, I became aware my weight had tipped,’ she said.

‘I had an upcoming art exhibition and when I went to buy a dress at my favourite shop, I realised they stopped at size 16.

‘I couldn’t fit anything anywhere, something that prompted me at the time to try and lose some weight.’ 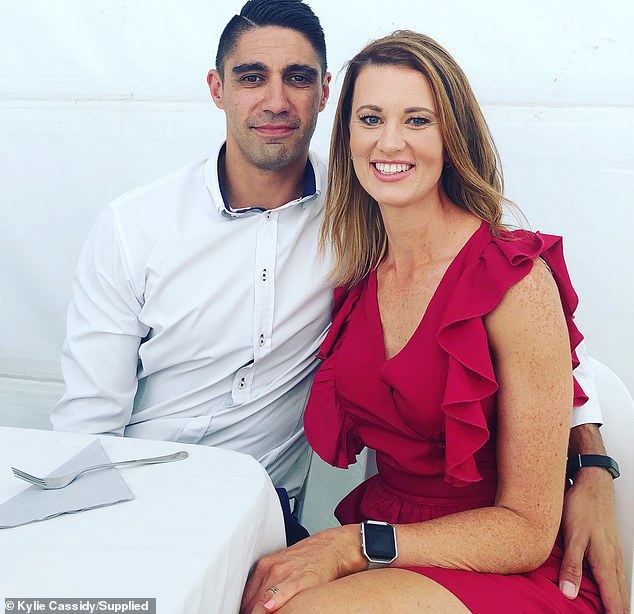 Kylie (pictured with her husband left) said she was motivated to lose weight so she could fit into a dress for an upcoming exhibition, a goal she achieved with ease 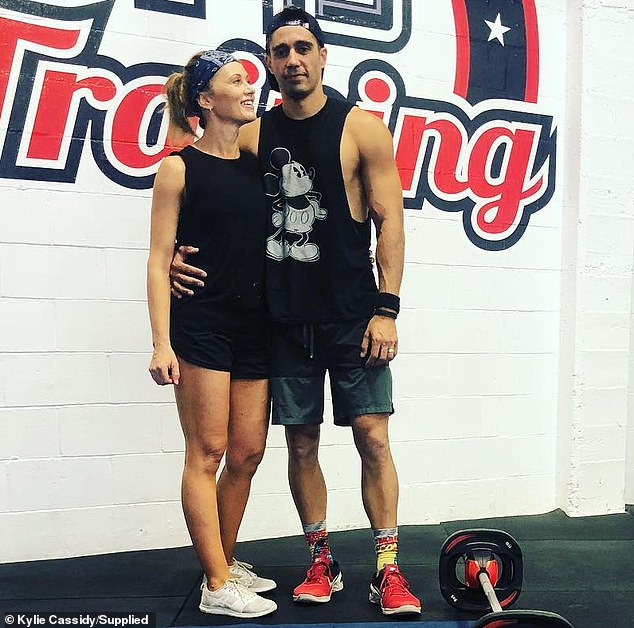 Her goal at that time was simple, she wanted to slim down from 92kg to 80kg.

The first changes she made were to her diet as it previously consisted of sausages and bread, sugary treats, litres of Coke and carb-laden meals.

‘I grabbed a few books from the library and learned about eating whole foods and clean eating,’ she said.

Kylie also said she focused on fitness – something she made a daily habit.

‘I walked as much as I could. If the weather was bad I’d dance around the lounge with my then two-year-old daughter.

‘As my energy grew and the weight fell off I introduced Yoga.’ 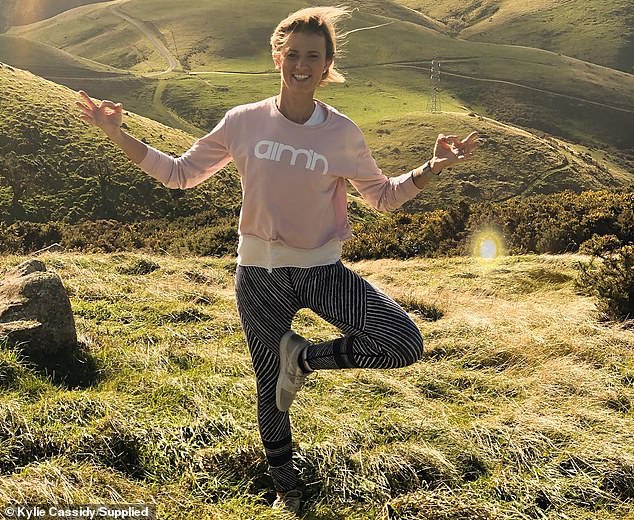 Hitting her first milestone took three months – an achievement which inspired her to continue.

After reaching 68kgs, she plateaued. Regardless, she said she pushed on and within a year she weighed 57kg.

At first, Kylie revelled in the rewards of her newly slimmed-down physique; she had more energy for her kids and people around her were complimenting her.

‘The more weight I lost, the more compliments and attention I received. Things like “Wow, no offence, but you were so big” or “You look so much better now”,’ she said.

What is Kylie Cassidy’s day on a plate before?

Afternoon tea: Two or three chocolate biscuits and a can of V

Throughout the day, Kylie would drink up to two litres of Coke

What is Kylie Cassidy’s day on a plate after?

Breakfast: Porridge with blueberries, sliced almonds and a scoop of protein powder

Lunch: an omelette filled with green veges; or some sort of lean meat served with veges 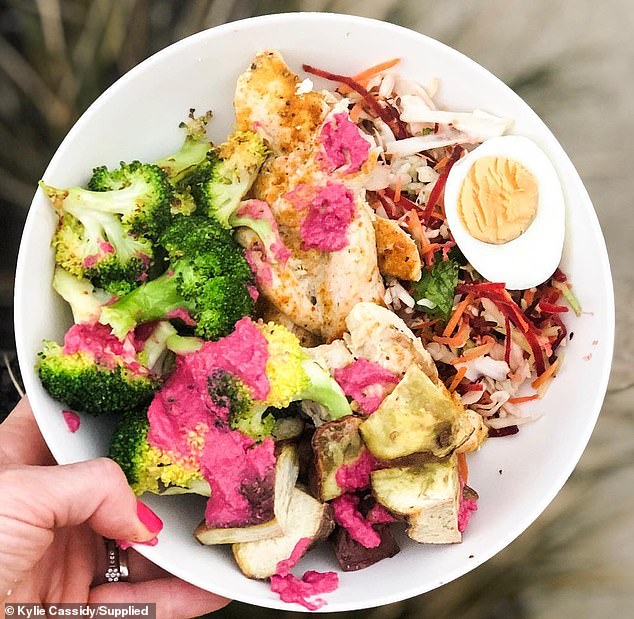 However, rather than feel as if she deserved to be acknowledged for her hard work, Kylie started to worry her weight loss was all people saw.

‘The same men who had made fun of my husband for being with a “chubby” girl were hitting on me, not realising who I was,’ she said.

‘I was unrecognisable. It made me feel so sad for my former self and I developed anxiety about putting weight back on.

‘I started to believe people liked the smaller version of me.’ 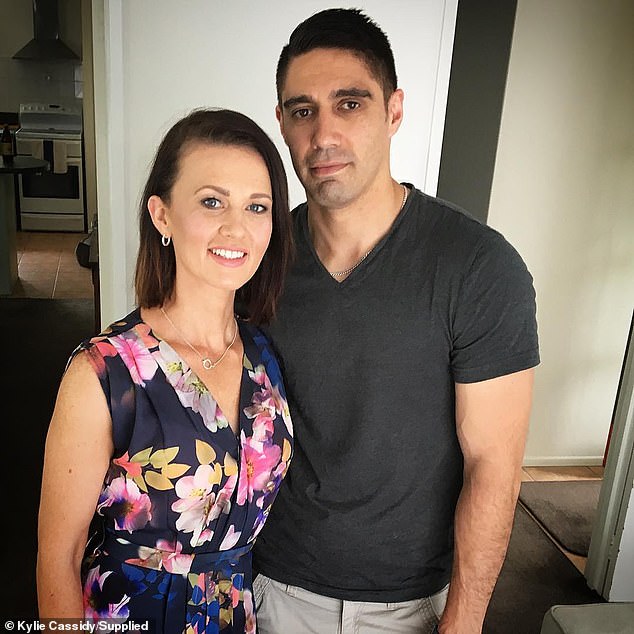 Rather than feel as if she deserved to be acknowledged for her hard work, Kylie worried people didn’t see anything more than her weight loss

Kylie said the problem was she believed her worth was entirely wrapped up in her appearance, and if this changed others might start excluding her from their lives.

‘I would even get anxious putting up photos on Facebook in case people thought I’d gained a bit of weight. It was that bad,’ she said.

‘I’d had issues at school with bullying – people making fun of me and calling me ugly – all the things I thought I’d gotten over suddenly came back to haunt me and I just felt like a big fraud.

‘When people started to call me “beautiful” I just didn’t believe it.’

Her battle with her appearance raged for the next 13 years, eventually coming to a head after she hit rock bottom, crippled by anxiety.

‘Last year I had a bit of a mental breakdown and started on anti-anxiety medication and counselling.

‘I was stressed at work, and being a busy mum of three, I just couldn’t keep up with life.’ 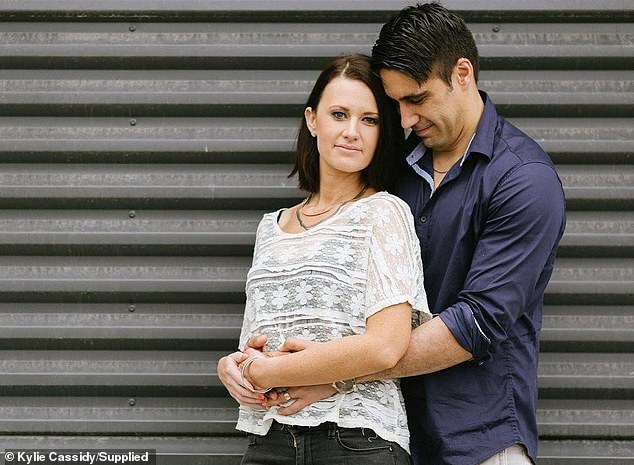 The mum-of-three said everything came to a head last year, although, this finally allowed her to stop and take stock of what really mattered

Symptoms of her breakdown included difficulty functioning in her daily life as well as problems sleeping.

‘It wasn’t until this happened that I was able to go through the process of healing and learning to love the things about myself that weren’t anything to do with how I looked,’ she said.

Finding her self-worth meant rediscovering a passion for art, design and photography – hobbies she’d once loved. 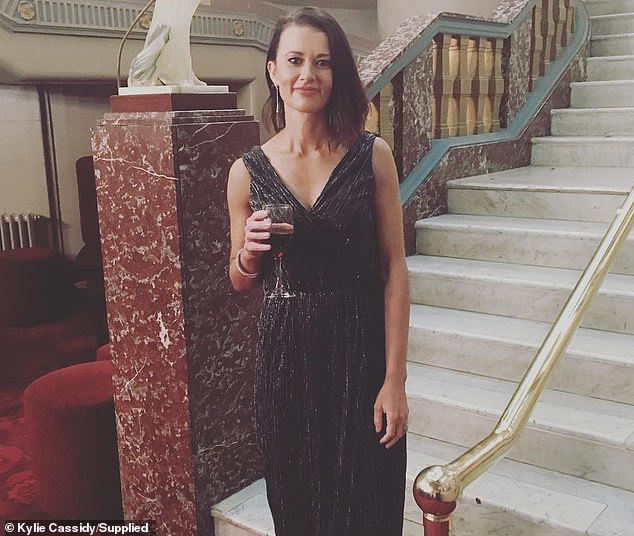 Today, Kylie has learnt the only opinions she cares about are those of her family and friends.

‘They’ve always stuck by me 100 per cent throughout the years and always treated me the same regardless of my weight,’ she said.

Kylie has also done away with punishing diets and gruelling exercise regimes, although good food and fitness continues to be part of her life.

‘I eat well 95 per cent of the time but allow for sneaky treats. I love a glass of red wine and Kit Kats!,’ she said.

‘It’s important to stick with a weight and lifestyle you know you can maintain without feeling miserable. 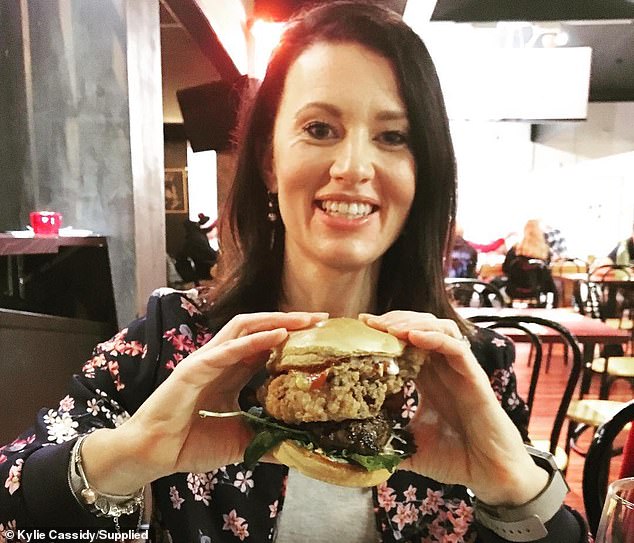 Today Kylie takes a more holistic approach to diet and exercise, placing importance on living a healthy lifestyle – one that has room for a few treats

At 59 kilograms, the mum-of-three said she feels healthy and is no longer driven by numbers on the scale.

‘I don’t weigh myself anymore and I don’t think of exercise and food as punishment,’ she said.

To those who might be struggling similarly, Kylie advised taking a step back to focus on ‘filling yourself up in other ways’.

‘It is easy to believe that by losing weight it’ll solve all your problems but unless you’re feeling good on the inside you’re just setting yourself up,’ she said.

‘Remember, your weight is not your worth.’

To find out more about Kylie and her health journey, please visit @kylie_smiley_nz