‘My husband is going to kill me’: Mum paints her staircase after drinking half a bottle of wine on her first night home alone in 10 years – with impressive results

A mother has revealed how she revamped her old staircase with a lick of paint after drinking half a bottle of red wine on her first night home alone in 10 years.

The woman, from Canberra, said she decided to keep herself occupied after her husband took their daughters, aged three and six, away for the weekend.

The woman documented her DIY staircase transformation on social media as she called on fellow mothers to confirm whether or not she made the wrong decision. 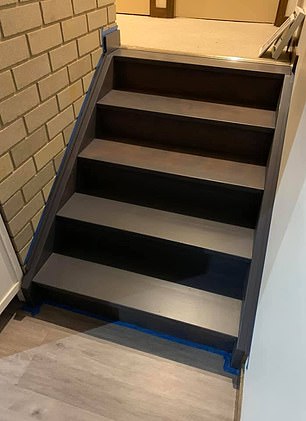 ‘My husband took my daughters away for the weekend so I’m home alone. So what do I do on my first evening alone for about a decade?’ she said in a tongue-in-cheek post in a Facebook group.

‘I drank half a bottle of red wine and painted the stairs. My husband is gonna murder me. Please tell me they look okay.’

‘If you don’t hear from me after Sunday, I’m buried in the back yard.’

In a follow up post, the woman pointed out the staircase looked different in the snaps because she ‘wasn’t sober enough’ to take the ‘before’ shot so she took a similar one in her home to give everyone an idea of what it used to look like.

‘Two different stairs in the photos. I wasn’t sober enough to take a “before” shot. We have three of these stairs in our split level so I’m going to be busy today,’ she said.

She was then bombarded with questions on whether she sanded her staircase before the paint job, to which she responded: ‘I definitely sanded them.’

‘Errr… I think I definitely sanded them… um… I definitely plugged the sander in and it looks like it was used,’ she added. 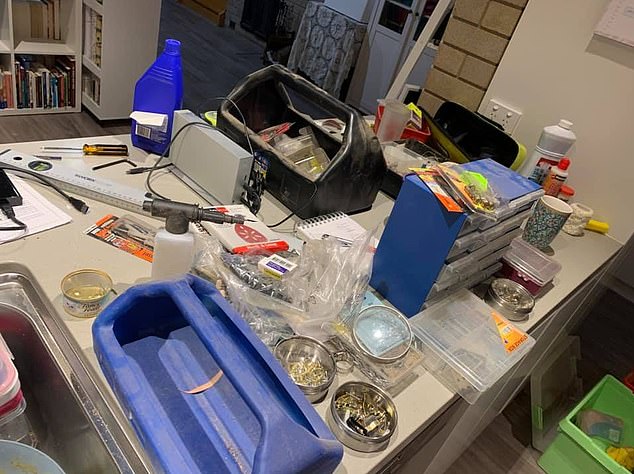 The woman said her kitchen looked like a ‘hardware store’ that ‘exploded’ in the house after she pulled out all the tools and appliances for the DIY paint work.

She shared another update on Sunday after her family returned home, saying: ‘[Husband] likes them. I am not a dead woman walking.’

For those who liked her paint colour, she said she used ‘Taubmans Canyon Black’ for ‘anyone who wants to know the paint colour responsible for my untimely demise’.

Her post has since been ‘liked’ more than 6,800 times, with hundreds of people praising her for doing an ‘awesome’ job while ‘drunk’.

Others joked she shouldn’t have told her husband about the makeover just so she could ‘see how long it takes him to realise’.