‘So cruel’: Mum seals a terrifying object inside her kitchen bench that won’t be found until new owners renovate the home in ’50 years’ time

A DIY mum has shown off her dark sense of humour after hiding a human skeleton in her newly installed island bench.

The mum-of-two posted photos of the life-like skeleton ‘crouching in the dead space’ and joked about the idea of him scaring the next people who renovate the property.

’50 years from today someone will tear out this kitchen and this cabinet will get the whole neighborhood on their feet,’ she wrote.

‘I wish I could travel in time to see the face expression of that poor guy that will pull the countertop off of that cabinet,’ she added.

The mum dressed her skeleton in a tradie t-shirt, cargo pants and a cap – and put a red pen in his hand.

And while thousands of home renovators found it ‘hilarious’ others said the mum didn’t take the joke far enough.

‘Have him holding a note and tell them they were isolating during a Covid bout. Then they can have a history lesson as well,’ one woman said.

Another said he should be wearing a facemask and holding a positive RAT test.

Some said the joke was simply cruel.

‘I think you’ll give them a heart attack and surviving that, a bloody good laugh,’ one woman said.

Others couldn’t understand why the mum chose to have dead space in the island bench at all.

‘Why is it an empty space and not storage? The skeleton is taking up valuable real estate. Seriously, one can never have enough storage,’ one woman said.

One woman said she once oversaw a renovation where a child’s coffin was uncovered. 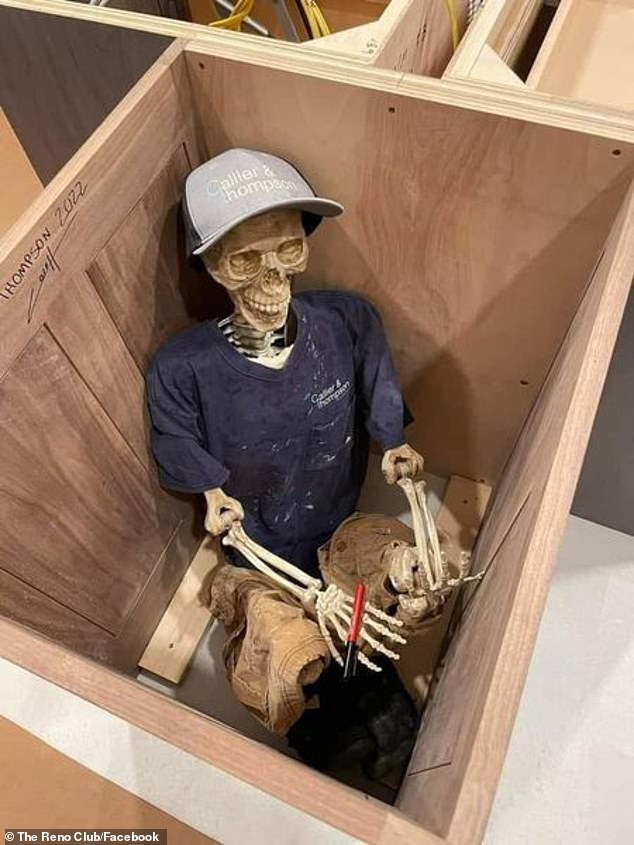 The mum dressed her skeleton in a tradie t-shirt, cargo pants and a cap – and put a red pen in his hand

Her staff put the casket on her desk and said as the boss she had to open it.

‘No way was I going to open it! I would have resigned first. Turned out it was a prankster with the same sense of humour as these guys doing something similar to this. It was a time capsule. Not very amusing at the time but made for a good story after the event,’ she said.

The woman pities the people who find the skeleton.

‘I didn’t take too much notice of the actual contents as I was too shaken from the experience. I was traumatized,’ she said.

Others said the woman’s fifty-year renovation estimate was generous adding it will probably be remodeled in ten.