Brooklyn McInerney, pictured with her baby Everleigh in hospital after she stopped breathing and went limp in her cot at home

Brooklyn McInerney, from Bourke in northwest NSW, said her daughter Everleigh was happy and alert in her cot when she quickly stepped out of her bedroom to put freshly pumped breast milk into the fridge.

She hadn’t even made it to the kitchen when the baby’s apnoea alarm sounded throughout the house, prompting Brooklyn to ‘drop everything and run’.

‘When the alarm went off I felt my whole life being pulled out from underneath me,’ the 22-year-old told FEMAIL.

When she entered the bedroom, the monitor told her Everleigh hadn’t taken a breath for 20 seconds.

‘When I saw her she was blue and floppy. My life flashed before my eyes, she wasn’t even flinching and the alarm was right in her ear.

‘I touched her and thankfully she came to and was okay,’ Brooklyn said.

The traumatic incident, which happened 11 months ago, still brings tears to the mum’s eyes. 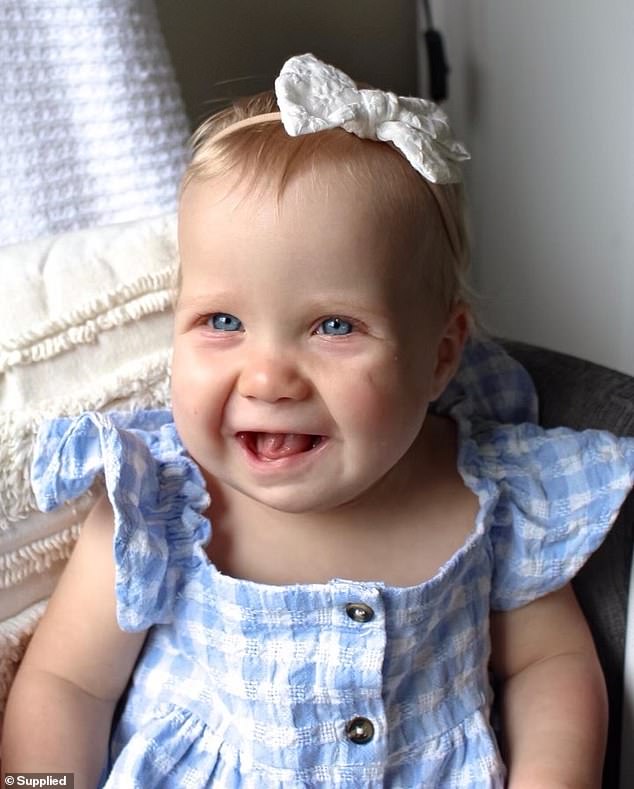 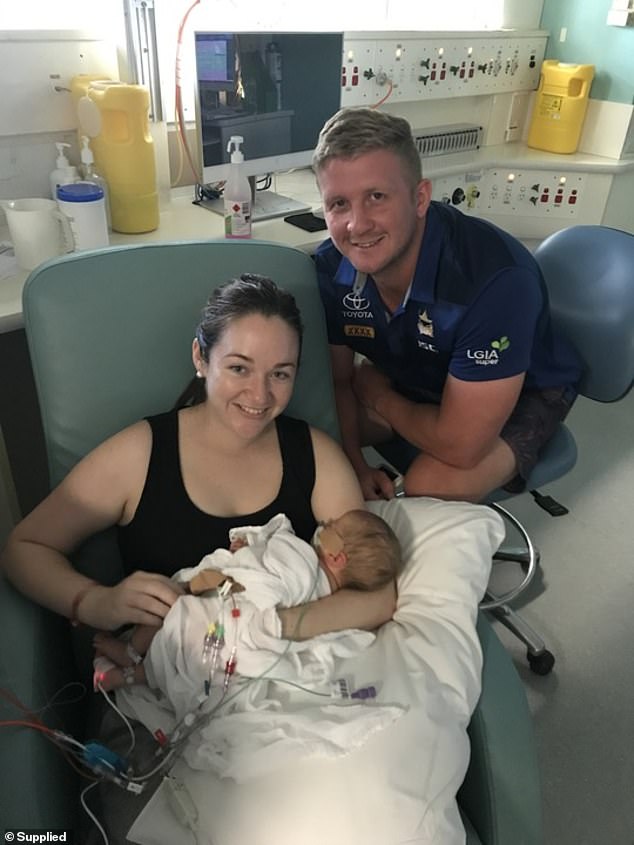 Brooklyn and her partner weren’t expecting Everleigh to have complications and spent their first five weeks together in hospital in Sydney, 800km from their home in Bourke

‘I was horrified that I might have to use CPR on my newborn but all the steps came rushing back to me, I knew I could do it,’ she said.

Everleigh was born with Pierre Robin Sequence, which means her airways are narrow, she has a cleft palate and her tongue can easily fall backwards, causing her to suffocate.

This happened the moment she was born, with hospital staff resuscitating the seconds-old baby.

‘She was taken from us straight away, they tried to incubate her seven times before they were successful because her airways were so narrow they couldn’t get the tubes in.’

Brooklyn said she looked up at her partner, Bailey Smith, the moment Everleigh was whisked away and will never forgot his expression.

‘I have never seen him more scared than he was in that moment, it was the first time I had ever seen tears in his eyes,’ she said of the 24-year-old who has six-year-old daughter to a previous relationship. 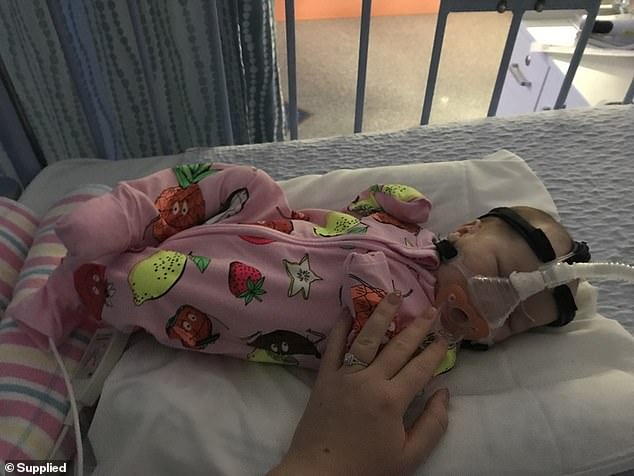 They were overjoyed when they were able to go home, but had to soon return to the hospital after Everleigh stopped breathing

‘Parenting wasn’t new to him but having a sick baby was, it was just as scary for him as it was for me,’ Brooklyn said.

Everleigh was born at Dubbo Hospital but was swiftly moved to Westmead Children’s Hospital where specialists could treat her rare condition.

‘My pregnancy was normal so we were all expecting a healthy baby, if doctors had known she had PRS she would have been born at Westmead.’

Brooklyn and Bailey spent the next five weeks ‘a world away from home’ in Sydney where doctors and nurses cared for Everleigh.

‘They taught us CPR, and how to tube feed her and how to keep her alive,’ Brooklyn said.

They also put the baby on a CPAP machine and apnoea monitor and taught her parents how to use the lifesaving devices at home.

Pierre Robin sequence, also called Pierre Robin syndrome, or PRS, is a condition where babies are born with a small lower jaw, have difficulties breathing (airway obstruction) and often (but not always) have a cleft palate (an opening in the roof of the mouth).

The breathing problems start either from or shortly after birth and are often also associated with feeding difficulties and problems gaining weight.

Having a small jaw and cleft palate, along with breathing difficulties, which can be present from birth.

These may show in one or more of the following ways:

2 – Their chest appears to be sucking in with each breath

3 – A grey or blue colour appears around their lips, even if the baby is still breathing

4 – Their breathing may be noisy (especially when breathing in)

If you see any of these signs of breathing difficulty, call an ambulance immediately.

During their stay at Westmead, Everleigh had a number of episodes but medical staff were always on hand to help.

When it was time to go home Brooklyn was excited, because Bailey’s other daughter Lilah and the rest of the family would finally be able to meet her, but also scared.

However, after Everleigh stopped breathing at home, the family returned to Sydney and the baby’s personal medical team. 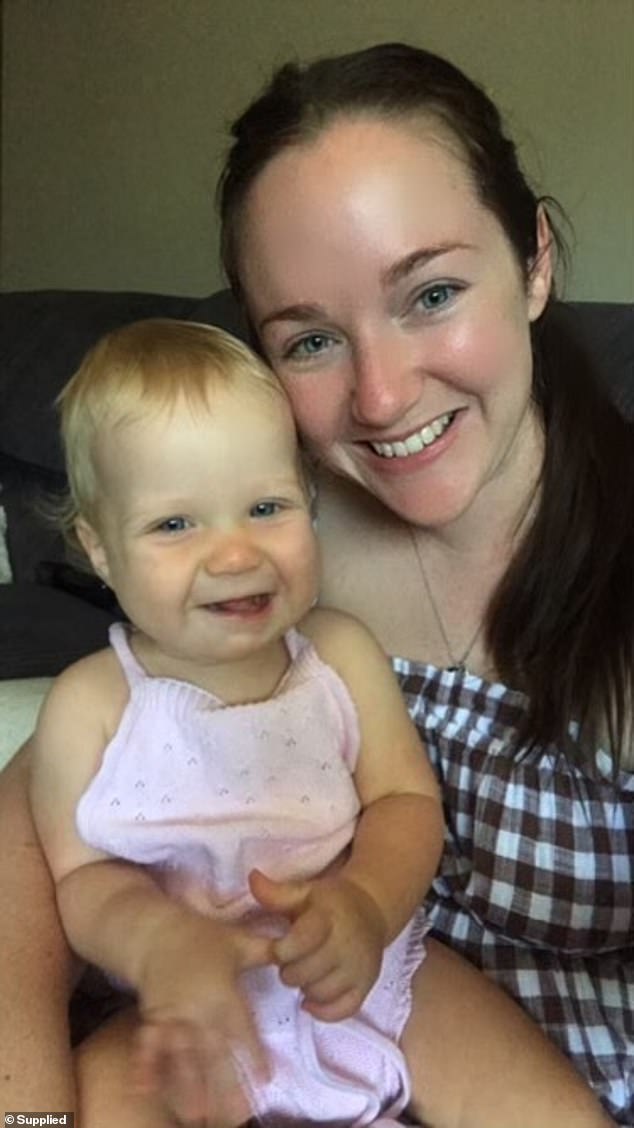 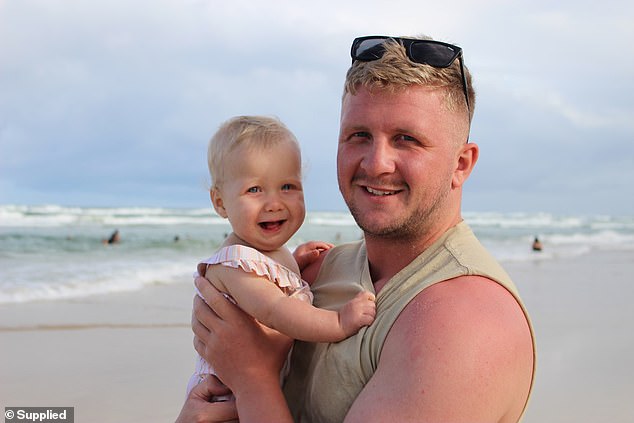 Everleigh, pictured with her dad Bailey, hasn’t had an episode since the operation

Doctors decided Everleigh would benefit from having her jaw ‘wound out’ which would involve cutting the bone and changing the shape of her bite.

They sent the family home for two weeks to help them decide if they wanted to go through with the procedure.

‘After three days of stressing that she would stop breathing I agreed to the surgery. It was always there at the back of my mind and I didn’t know how much more I could take,’ Brooklyn said.

Everleigh has been breathing fine since having the operation, and recently celebrated her first birthday.

She will have her cleft palate fixed in June and see speech pathologists and audiologists down the track.

What are Brooklyn’s tips for mums with sick kids?

1 – Take time for yourself, including looking after your mental and physical health

2 –  Lean on your family and friends for support

3 – Use the hospital social workers – they are amazing

4 – Know how to perform CPR on a baby

Brooklyn, who works as an environmental officer for her local council, always wanted a family of her own.

‘It scared me for a while after she stopped breathing. And I wondered why I had been chosen for this journey,’ she admitted.

‘But now I know it has made me a stronger mum and me and Everleigh were meant to be in this together.’ 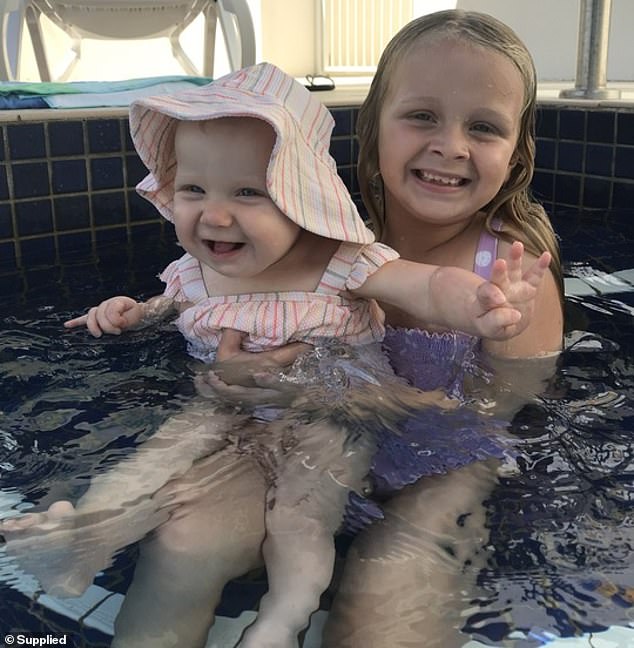 She plans on having more children and says she is prepared for whatever happens next.

‘Obviously I want a healthy baby but it won’t break us if we don have one and we know that now, so we could handle it better.’

Brooklyn and Everleigh are now ambassadors for Westmead Hospital’s Bandaged Bear Appeal, and donations can be made here.