How to clean your shower in MINUTES: Mum shares the simple three-product trick that leaves her bathroom sparkling

A mum has shared the simple three-product cleaning method for transforming her shower screen from dirty to sparkling new without spending hours scrubbing.

Emmy Rachelle, from Adelaide, shared a viral TikTok video showing how she cleaned her bathroom in just minutes using dishwashing detergent, vinegar and a dish wand.

‘This is another hack that I found on TikTok that just works,’ she said.

She simply poured the dishwashing liquid into the handle of the dish wand until it reached half way, followed by vinegar.

The mum said she initially mixed the two ingredients in a spray bottle but found the method was ‘a waste of time’ after she cleaned the surface with a microfibre cloth. 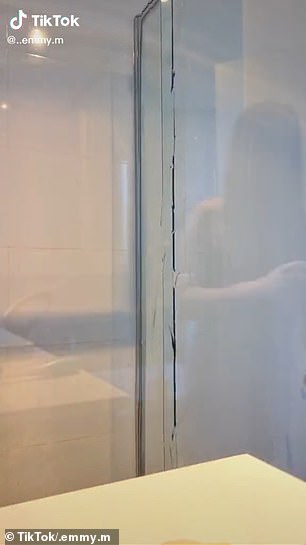 But after giving the dish brush a go, she was amazed with how quick and easy it was.

‘You can even do the outside of the shower and just wipe it down with a towel or anything with microfibre – and it just comes up so clear,’ she said.

Her video has since been viewed more than 1.6 million times, with many saying it’s by far one of the best ‘cleaning hacks’.

‘Ok, this hack changed my life! Cleaning the shower has never been so easy,’ one woman wrote, while another said: ‘ 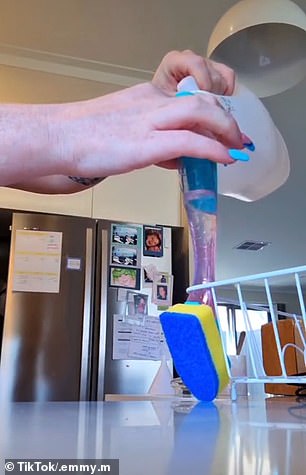 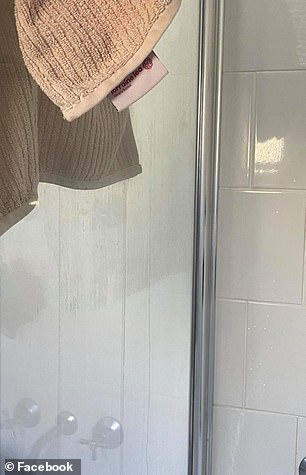 She shared a viral TikTok video showing how she cleaned her bathroom in just minutes using dishwashing detergent, vinegar and a dish wand (left). One woman decided to give the cleaning method a go and she was impressed with the results (right)

Many were impressed with the cleaning trick, with one woman saying: ‘Holy c*** just did my shower screens with half vinegar and half dishwashing detergent. Scrubbed with the green side of a sponge and rinsed. Mind blown it bloody worked!

‘Haven’t had my shower screen this clean since we moved in six years ago. I have tried so many toxic sprays and this is the best.’

While another added: ‘I’ve used this formula and it absolutely works. But I heat the vinegar first… not sure if that makes a difference.’

Others said they were keen to try out the cleaning method.

‘Oh my god, why didn’t I think of this before?’ one wrote, while another added: ‘Mind blown, never thought to add vinegar.’