An upset mum who hit out at a bride-to-be over her decision to exclude kids from her wedding has been slammed for her reaction.

A photo showing the invitation was posted in a wedding shaming group on Facebook, along with a caption that read: ‘Shaming the guest who wrote this s**t.

‘That’s a one-way ticket to getting uninvited. I’m not having kids at my wedding if I can avoid it.’

The anonymous poster also shared the mum’s reply which read: ‘Where is the respect when [name covered] is part of the family.’

‘He is my family! That’s not respect!’

An upset mum has said the bride and groom’s decision to exclude children from their upcoming nuptials is disrespectful to her son (pictured, the wedding invitation)

Do you think children should be allowed to attend weddings?

The mum’s reaction to the bride’s decision to have a child-free wedding has been universally slammed online.

‘We said no kids at ours… most of our parent friends were THRILLED to be able to let loose,’ one wrote.

‘Uninvite them! Said another. ‘If they can’t respect your day then they don’t need to attend.’

‘I don’t really understand people who WANT to bring their kids to weddings… in the time my son has been alive I’ve been to three weddings and one of them I was in… there’s nothing at a wedding for kids,’ said a third. 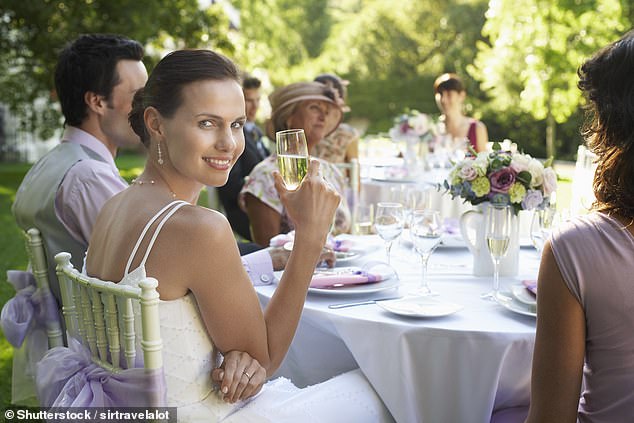 ‘If you can’t find a sitter then don’t go. Your kids don’t make you entitled to be at a kid-free wedding,’ said one.

‘I want an adults-only wedding and I won’t make exceptions for anyone.’

‘I will never understand why people think this isn’t a choice for the bride and groom to make,’ said another.

‘Ugh, people are so entitled. If they don’t like it, they can not just go.’