A young mum-of-three who suffered a stroke after giving birth has shared the warning signs all women should be aware of.

Stephanie Gallegos welcomed her third child, Dahlia, into the world on October 8 2021. She was on top of the world but also in agonising pain.

Mrs Gallegos told FEMAIL she ignored her symptoms and didn’t return to hospital for four days because she was concerned about her premature baby.

‘At that time I was just focusing on my baby because she was more important. I was ignoring my headaches, my blurred vision, and the swelling in my feet – but as a mum you always put your kids first,’ the 31-year-old from Los Angeles said.

‘When I finally decided to go to the hospital they said “we think you’re having a stroke” and I didn’t believe it at first.’

The stoke was caused by a serious medical condition called preeclampsia – which can occur after 20 weeks of pregnancy – and Mrs Gallegos needed urgent surgery to reduce the swelling of her brain.

Stephanie Gallegos (pictured) welcomed her third child into the world on October 8, 2021. But at the time the 31-year-old was in excruciating pain, had swelling and headaches 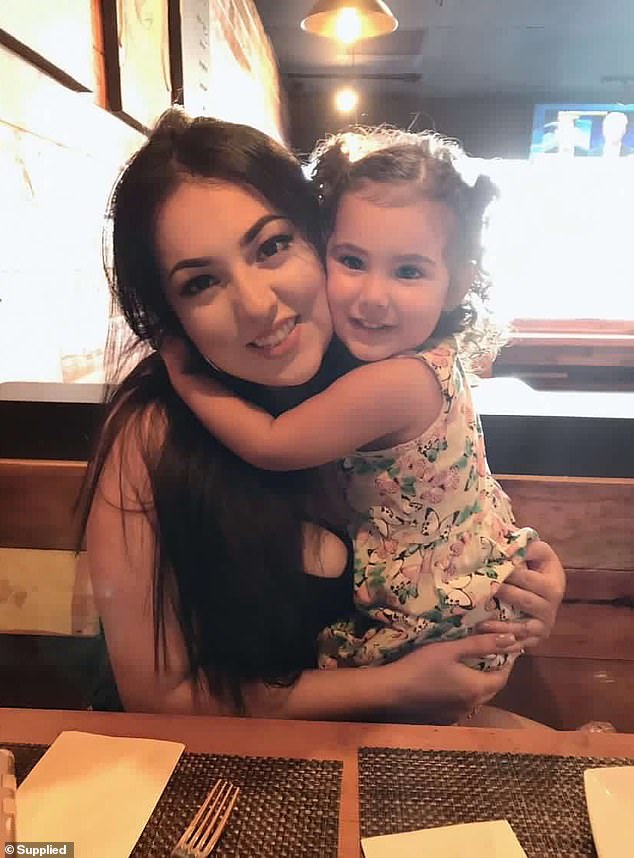 Mrs Gallegos told FEMAIL she ignored her symptoms and didn’t return to hospital for four days due to frightening concerns with her newborn (pictured with oldest daughter Alayna, eight)

She suffered from preeclampsia during all three pregnancies and gave birth at 37 weeks last year.

At the time Mrs Gallegos also had cholestasis – a liver condition that occurs in late pregnancy.

During her third pregnancy she said she complained to a GP about headaches and swelling but ‘nothing was done’. She then saw another doctor who monitored her symptoms.

‘After my daughter was born I noticed she wasn’t breathing right and when we got home she turned blue. I was so worried and we rushed straight back to the hospital,’ she said.

Thankfully everything was fine and the premature baby was draining fluid but remained in hospital to be monitored for a couple days.

During that time Mrs Gallegos was suppressing her symptoms until it became too much.

Little did she know she was suffering from a stroke.

‘We took Dahlia home and my mum took me to the hospital even though I was being stubborn about it. I kept telling myself “it’s nothing, I’m fine”,’ she said. 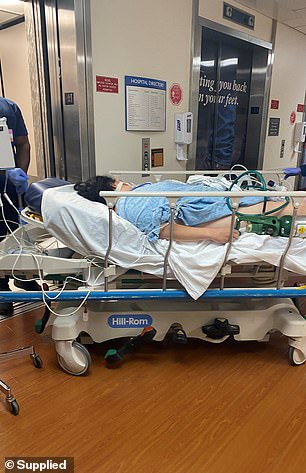 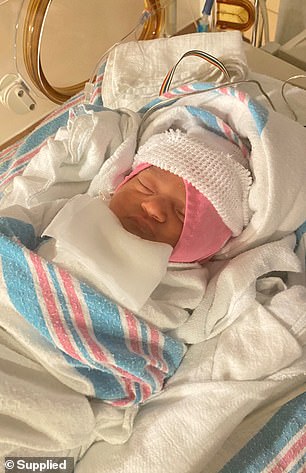 She didn’t know it at the time but she was having a stroke caused by preeclampsia – a serious medical condition that can occur after 20 weeks of pregnancy (pictured left before surgery). Mrs Gallegos gave birth to daughter Dahlia (pictured right) at 37 weeks 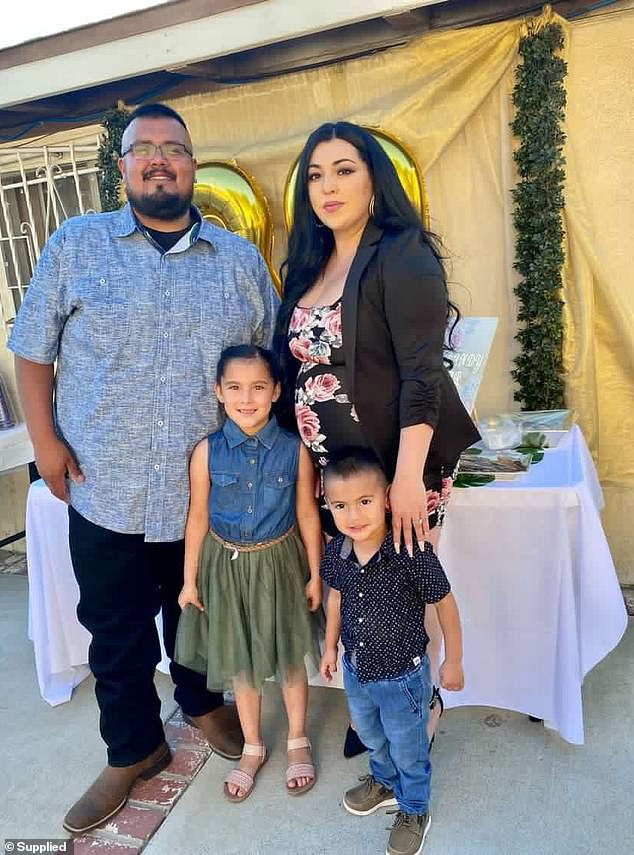 ‘When I finally decided to go to the hospital they said “we think you’re having a stroke” and I didn’t believe it at first’,’ she said. Mrs Gallegos then had an MRI on her head and doctors noticed a blood vessel in her brain had ‘ripped’ (pictured with her family)

Mrs Gallegos then had an MRI and doctors noticed a blood vessel in her brain had ‘ripped’.

She had emergency brain surgery the following day to reduce the swelling of her brain.

‘They ended up removing a chunk of my skull and placed it in my abdomen to preserve it, but I have scars on both my head and stomach,’ she said.

The medical strategy helps with preserving the bone and keeping it sterile.

Straight after the surgery she was placed in an induced coma for 10 days to give the body time to heal. At home her fiancé and in-laws were looking after the kids.

Research has found there’s a correlation between strokes and women who have been on the pill, but Mrs Gallegos said she’s never taken birth control.

What is preeclampsia in pregnancy and what are the symptoms?

Preeclampsia is a serious medical condition that can occur after 20 weeks of pregnancy.

It typically causes high blood pressure and can affect several of your body organs, including the liver, kidney and brain. If left untreated, it can lead to serious problems for you or your baby.

Most women with pre-eclampsia do not have any symptoms. It is usually diagnosed during a routine antenatal appointment.

But symptoms can include:

‘When I finally woke up I thought that I was still there after having my baby. I was so confused and the nurses had to explain what happened,’ Mrs Gallegos said.

‘I went to the bathroom and saw all my hair was gone, and I had the longest hair ever. Instantly I started balling my eyes out.

‘I always ask myself “Why me? Why did this have to happen?”‘

Since the brain surgery was on her right side, her left side was paralysed when she woke up and she couldn’t walk.

Mrs Gallegos had mobility rehabilitation for one week along with speech therapy for two months.

‘During therapy my dad came with me and said: “Isn’t this crazy, it’s the second time I’m teaching you how to walk”,’ she said with a laugh.

For three months she continued therapy at home because her left hand wasn’t working properly and her face was ‘droopy’.

Mrs Gallegos had to stop breastfeeding because of the high blood pressure medication she was on, but she couldn’t even make bottled formula milk because it would ‘fall from her hand’.

‘There were so many things I couldn’t do myself, I even needed help showering, I felt like a toddler again,’ she said.

She later had another surgery to insert the bone back into her skull. 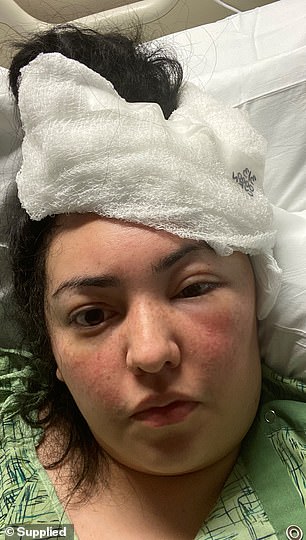 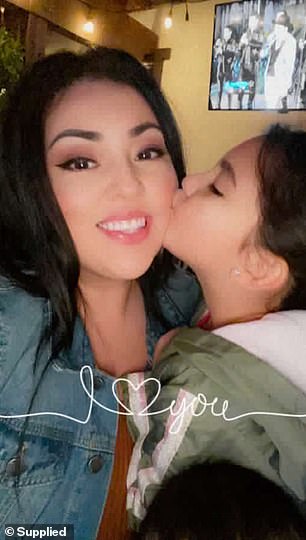 Mrs Gallegos had surgery to reduce the swelling on her brain and part of her skull was removed and stored in her abdomen. Weeks later she had another surgery to insert the bone back into her skull. After the ordeal doctors said she cannot have any more children because the risk of death is too high

After the ordeal, doctors said she cannot have any more children because the risk of death is too high.

‘Because of the preeclampsia, the stroke, everything that happened.. the doctor said that maybe next time I won’t make it,’ she said.

‘I know I already have three kids but I did want more.’

Mrs Gallegos has also been left with a number of side effects, including short term memory loss, anxiety, PTSD, migraines, numbing in her hand and left side of her face. Her vision has also been impaired but she’s able to drive.

‘Life has changed a lot and I worry I’ll have a stroke again,’ she said. 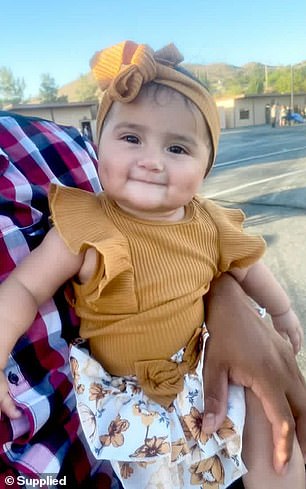 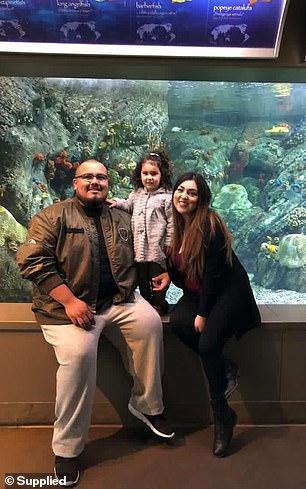 More than anything Mrs Gallegos hopes her story will raise awareness and how young people can suffer from strokes too.

‘Pregnancy is a beautiful thing but it’s also serious – you could die like I almost did if you’re not careful,’ she said.

‘You have to make sure you are heard by your doctors and don’t let symptoms go unnoticed.’