A brave mother diagnosed with dementia at just 37 has had her right arm inscribed with a defiant tattoo that reads ‘kiss my a*** Alzheimer’s’.

Vicky Huntley, now 48, says the inking is her way of laughing in the face of the cruel illness that has caused her speech, memory and balance to deteriorate over the last decade.

She says it serves as a reminder of her vow to stay positive, even though the disease has claimed the lives of her mother, grandfather and great grandmother.

Speaking about her tattoo, Mrs Huntley, from Beckton, east London, said: ‘I absolutely love it. One of the tiles on the picture is blank, to signify something missing.

‘Whenever people see it, they want to take photos.’

Vicky Huntley, now 48, pictured with husband Martin, has the same disease that claimed the lives of her mother, grandfather and great grandmother which struck her at just 37 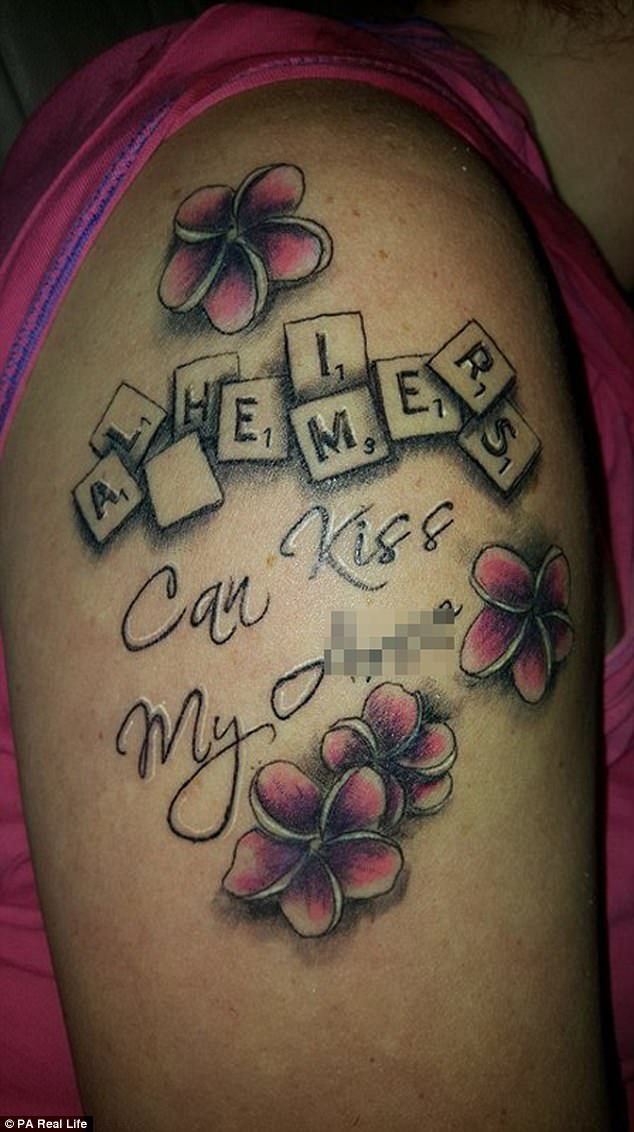 ‘I didn’t want to die the way mum did’

While Alzheimer’s is the most common form of dementia, the incurable familial form Mrs Huntley has – which has plagued her family for generations – is caused by a mutation in a single gene, and is thought to affect just over 600 families worldwide.

Her mother Susan died of it at just 56, after spending the last 12 years of her life in a care home, while her grandfather passed away at 42, and her great-grandmother at 36.

So at 36, before experiencing any symptoms, Mrs Huntley decided to take a blood test to see if she carried the faulty gene – which tragically proved positive.

‘I didn’t want to die the way my mum had, so I decided to take the test,’ said Mrs Huntley, who has now been forced to leave her job, working with disabled adults.

‘I think, deep down, I knew I had the gene, so when I got the results, I was prepared.’

However for her husband, Martin, a bus driver, 52, the news came as a massive blow.

He said: ‘I was worse than Vicky. She was the one comforting me.

‘I’d been hoping and hoping it’d come back negative. What made it even harder was that Vicky’s sister was being tested, too, but she hadn’t had her results back yet.

‘We didn’t want to tell her and scare her, so we kept it secret. But her results were negative and she didn’t have the gene.’

One of the most difficult tasks the couple faced was telling their children Leanne, 29, and Craig, 26 – knowing that their mother’s result meant they, too, could possibly develop the disease in the future.

Mr Huntley continued: ‘They were quite young at the time, so it was really hard. Even now, Craig finds it difficult to talk about, whereas Leanne is more open.

‘Neither have taken the test themselves yet, but we’re leaving that up to them. It has to be their choice.’ 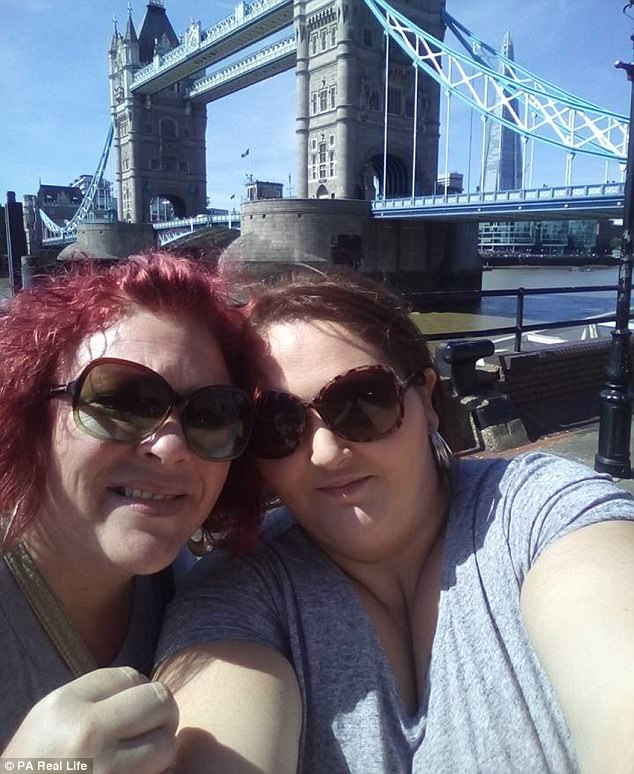 Mrs Huntley, who has been forced to give up her job working with disabled people, pictured making the most of life with her daughter Leanne

A year after Mrs Huntley’s diagnosis, she and Martin were married in a church ceremony in east London’s Walthamstow – throwing a huge party afterwards for all their loved ones.

Settling into life as newlyweds, at first, the progression of the disease was slow.

Then, she began to grow increasingly forgetful, also struggling with her speech and balance, meaning she had to quit her job.

‘That was really frustrating,’ she admitted. ‘I held on as long as I could.’

Around five years ago, Mrs Huntley also began to experience personality changes – usually mood swings, or panic attacks if she was somewhere too crowded.

But, the remarkable couple have vowed not to let this affect their relationship.

‘Because I’m the closest person, to Vicky, she will take things out on me,’ said her husband.

‘I know that’s not really her. She’s not the type to snap and argue. Sometimes, I think she doesn’t realise what she’s saying. 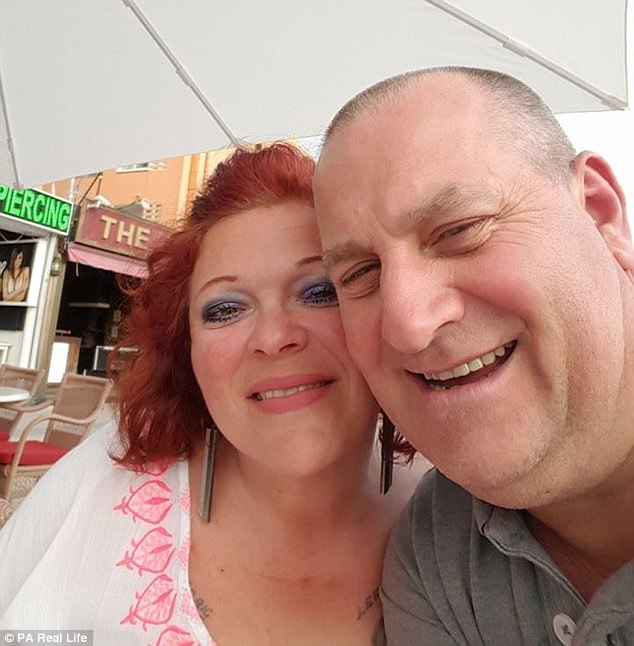 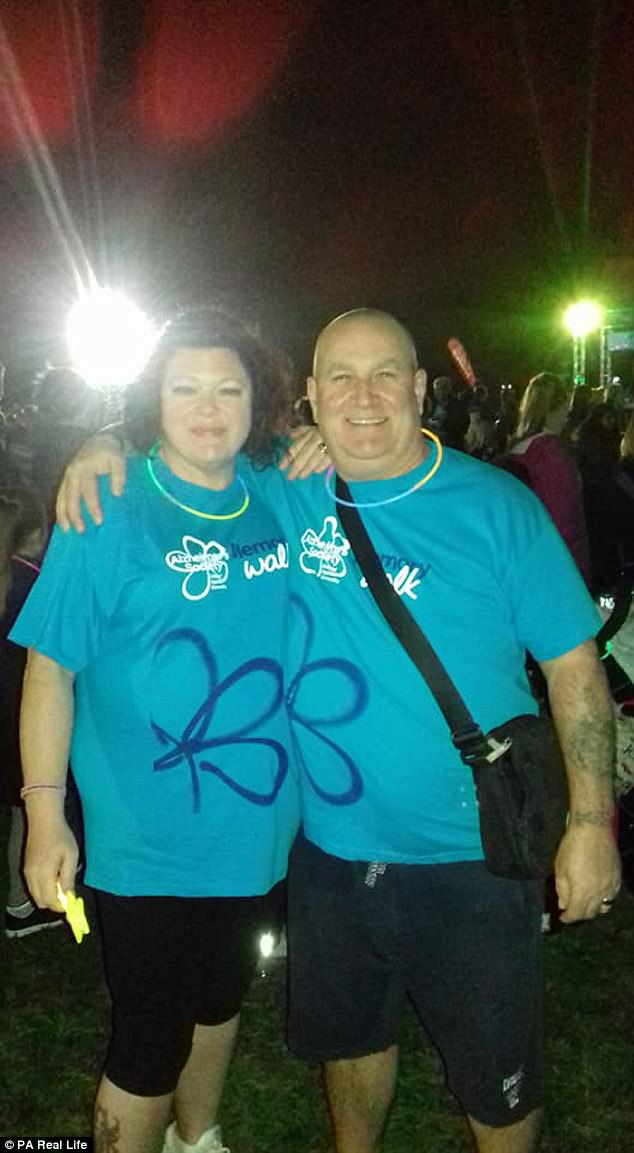 WHAT IS FAMILIAL ALZHEIMER’S?

Dr David Reynold, chief scientific officer at Alzheimer’s Research UK, said: ‘For the vast majority of people, Alzheimer’s risk is a combination of our age and lifestyle as well as our genetic make-up, and having a family member with the disease doesn’t necessarily mean that we have a particularly high risk.

‘For a few hundred families, like Vicky’s, genes can play a much greater role.

‘Familial Alzheimer’s disease is caused by very rare genetic faults that are passed down in families.

‘The errors in these genes cause a build-up of a protein called amyloid, which is thought to kickstart Alzheimer’s in the brain.

‘It usually affects many members of the same family, typically in their 40s or 50s. The faulty genes can only be passed down directly from an affected parent and children have a 50 per cent chance of inheriting the gene and developing the disease too.

‘Families with one of these rare genetic mutations face unique challenges and research is underway to better understand and tackle this rare form of Alzheimer’s disease.

‘Genetic testing is available for relatives of people with familial Alzheimer’s disease and genetic counsellors can help people consider the implications of these tests.

‘Anyone who has concerns about their risk of dementia or thinks that they may be developing symptoms should speak to their GP.’

‘We always knew it was coming, and that it was part of the disease, so I’ve learned to accept it. With every step, we’re aware it’s going to grow steadily worse – the mood swings, the speech, the forgetfulness.

‘But we love each other and we’ve stuck together.’

We ‘live for now’

Sadly, with Mrs Huntley’s exact prognosis being unclear, the couple – who are being supported by charity Alzheimer’s Research UK – are painfully aware that they will not have as long together as planned.

Determined to fill their time with as many happy memories as possible, she even has ‘live for now’ days.

Mr Huntley said: ‘We thought we’d have 40 years together, but it’s more likely to be 20. We’ve got lots to do, so we’re trying our best to fit it all in.

‘We still make sure we have a good time, going on holidays and having a drink when we can on her ‘live for now’ days.’

Mrs Huntley also hopes that, by sharing her story, she will help people realise that dementia and Alzheimer’s affect younger people too.

‘When I talk to people and say I have Alzheimer’s, they don’t believe me and say I look too young,’ she said.

‘That makes me angry, as it makes me realise how little portrayal there is of the disease in younger people.

‘A lot of the support out there is tailored to older people, but if you’re younger, the effects on your life will be completely different.

‘This is something that needs to be talked about, because it impacts on a lot of people’s lives.’