The origins of a 6-inch skeleton that was once thought to be the remains of an alien have been uncovered by scientists.

A new DNA study of the bones shows the remains are in fact human and belonged to a young girl aged around six to eight years old who had dwarfism.

Nicknamed ‘Ata’, the incredible find made in 2003 in Atacama, Chile, has a long cone like skull and just ten ribs.

Found in a leather pouch in an abandoned church, the skeleton was nicknamed ‘Ata’.

Scientists have tested the DNA of a bizarre human skeleton, once rumored to have extraterrestrial origins. The skeleton, nicknamed Ata, was discovered more than a decade ago in an abandoned town in the Atacama Desert of Chile

The skeleton, found in a leather pouch behind an abandoned church, is believed to belong to a six-year-old girl. Shown here is her cone-shaped head

The skeleton found its way to a collector in Spain who speculated that it was an extra-terrestrial – judging from its bizarre appeareance – and it appeared in a documentary, Sirus, which suggested it was evidence of alien life.

After five years of deep genomic analysis scientists have pinpointed the mutations responsible for the anomalous specimen.

Genetic tests at the University of California, San Francisco and Stanford University have proven beyond contention that the bones were that of a human female that died 40 years ago.

The researchers found mutations in not one but several genes known to govern bone development, some of which have never been described before. 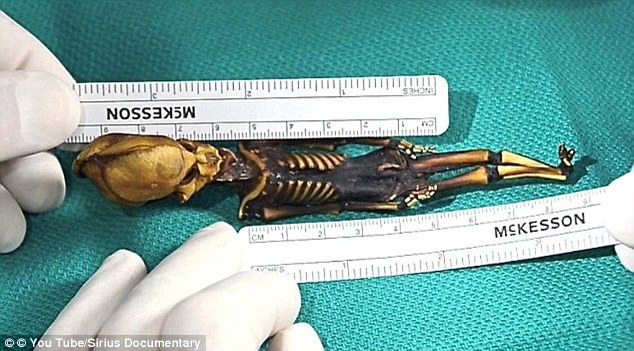 The latest study revealed four new SNVs -a type of genetic mutation at the individual level – in genes that were known to cause bone diseases, like scoliosis or dislocations, as well as two more SNVs in genes involved in producing collagen

DNA analysis reveals that her appearance can be explained by a series of genetic mutations that are linked to dwarfism and other bone and growth disorders.

The girl appears to have been aged between six and eight years old when she died.

It is not known whether the skeleton reached eight years – or whether Ata had a genetic mutation that made her bones grow in an accelerated way in the womb.

The skeleton is most likely from a premature baby, or from one soon after birth.

Sanchita Bhattacharya, a researcher at UCSF said she found 64 gene variants in ‘Ata’s DNA that seemed likely to be damaging.

She found that, incredibly, 10 of the variations were linked to do with skeletal problems including ‘short stature’ and ’11 pairs of ribs’.

Other gene variations include problems with producing collagen – used in cartilage – and genes linked to scoliosis – curvature of the spine.

Garry Nolan, a professor of microbiology and immunology at the Stanford University School of Medicine began the scientific exploration of Ata in 2012, when a friend called saying he might have found an ‘alien.’

Dr Nolan said that research on Ata may one day benefit patients.

Restricted growth, sometimes known as dwarfism, is a condition characterised by short stature.

There are two main types of restricted growth:

As well as having short stature, some people with restricted growth also have other physical problems, such as bowed legs or an unusually curved spine.

However, most people don’t have any other serious problems. They can often live a relatively normal life and have a normal life expectancy. 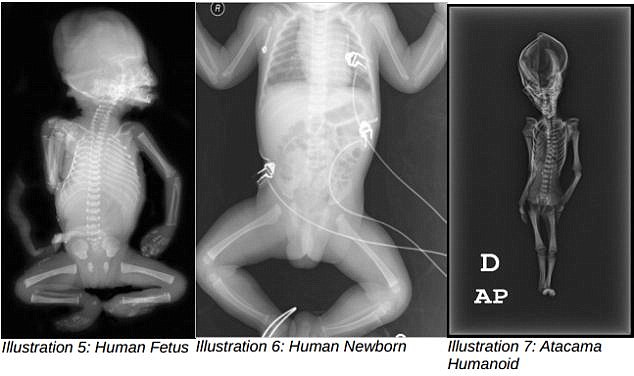 The skeleton, nicknamed Ata, was discovered more than a decade ago in an abandoned town in the Atacama Desert of Chile. The unusual appearance is explained by a handful of rare genetic mutations, some already known, others newly discovered 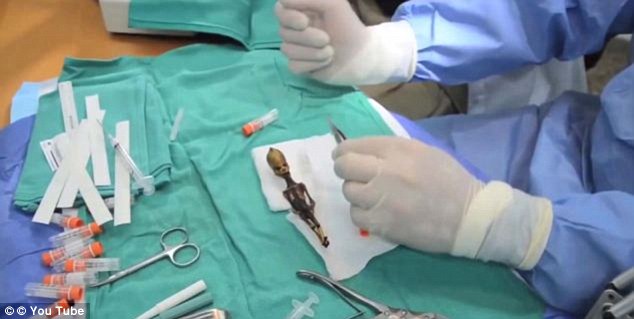 This was the skeleton of a human female, likely a fetus, that had suffered severe genetic mutations

He said: ‘Maybe there’s a way to accelerate bone growth in people who need it, people who have bad breaks,’ he said.

‘Nothing like this had been seen before. Certainly, nobody had looked into the genetics of it.’ 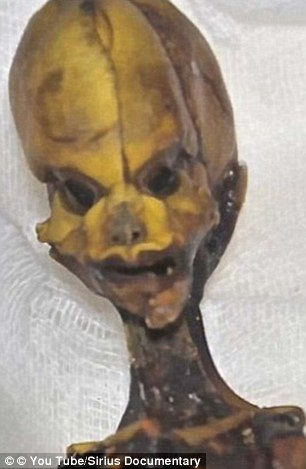 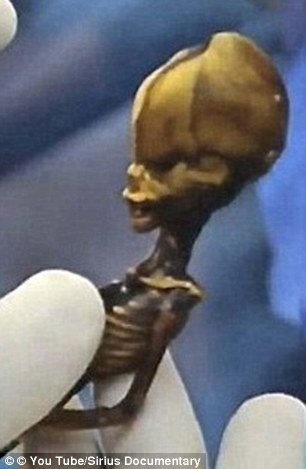 Now Dr Nolan said he hopes that Ata will be given a proper burial.

He said her genes are similar to those of Chilean Chilote Indians, and that the remains suggest she lived no more than 40 years ago.

He said that hopes little Ata will be given a proper burial. ‘We now know that it’s a child, and probably either a pre- or post-term birth and death.

‘I think it should be returned to the country of origin and buried according to the customs of the local people.’

The researchers speculate that the skeleton’s deformities and the fact it was found near an abandoned nitrate mine in Chile, may have resulted from DNA damage caused by exposure to nitrates. The skeleton is owned by a Spanish businessman based in Barcelona.

WHO HOLDS THE RECORD FOR THE SMALLEST PERSON IN THE WORLD?

The shortest person recorded by the Guinness World Records is the subject of much debate depending on accreditation.

Dwarfism is a genetic anomaly that results in a shortness of stature.

It can range in severity with some people developing a mild affliction and others being stunted to less that two feet tall in the most severe cases.

Chandra Bahadur Dangi, from Nepal, is regarded as the shortest man to ever live and measured 21.5 inches tall (54.6 centimetres).

The man was measured at 72 years old and also weighed around 31 pounds (14.5 kilograms).

He died in 2015 after a brief battle with pneumonia.

As for women, the shortest woman to have ever lived is believed to have been living in the Netherlands during the 19th Century.

That is about the average weight of a normal-sized person’s heart.

The country with the shortest average height, according to World Atlas, is Bolivia.

Whilst poor nutrition is believed to be a major factor, genetics also contributes to the shortness of the native people.

On the flip side, the tallest country in the world is believed to be the Netherlands.

The bones appear to be aged between six and eight years old. It is not known whether the skeleton reached eight years – or whether Ata had a genetic mutation that made her bones grow in an accelerated way in the womb

Researchers have found 64 gene variants in ‘Ata’s DNA that seemed likely to be damaging. She found that, incredibly, 10 of the variations were linked to do with skeletal problems including ‘short stature’ and ’11 pairs of ribs’