‘This is genius’: Savvy mum slashes her grocery bill by HALF by purchasing milk, eggs and bread for the week from McDonald’s instead of the supermarket

A mother has almost halved the cost of her grocery bill by skipping the supermarket and shopping for bread, milk and eggs at McDonald’s.

The mum from Tasmania noticed she had a 40 percent discount code on the MyMaccas online delivery app but didn’t want to order fast food for her family.

Instead, she used it to pay for basic essentials like bread and milk which have been available at McDonald’s since April 1 as part of a company decision to support customers and communities while supermarket restrictions remained in place.

Eggs and milk alternatives like almond, soy and lactose-free followed on April 17.

The mother bought four large bottles of milk, two cartons of eggs and three packs of English muffins from McDonald’s in southern Launceston, which worked out a remarkable $16.20 cheaper than buying the same items in stores like Coles or Woolworths.

Australia’s one-stop shop? The mother’s grocery haul of bread, milk and eggs from McDonald’s, which worked out $16.20 cheaper than buying the same items in a supermarket 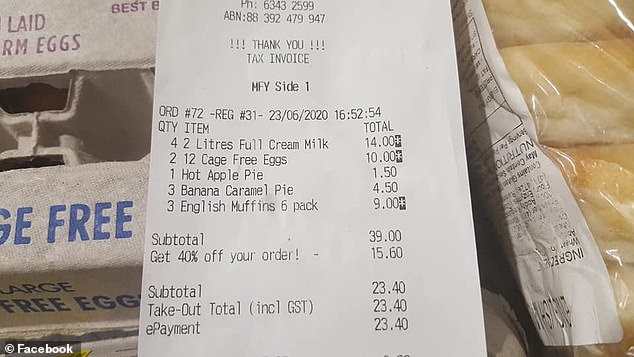 By applying a 40 percent discount code available on the MyMaccas app, she got two-litres of milk for $2.10, 12 eggs for $3 and six-packs of English muffins for just $1.80

The same quantity of Dairy Farmers milk costs $3.20 while a carton of 12 eggs costs $4.10 and a six-pack of Tip Top English muffins costs $5 at Coles.

She also ordered one McDonald’s apple and three caramelised banana pies which she got for 90c each.

Photos and a receipt for the haul have been liked 2,200 times since being shared in a budgeting group on Facebook on Tuesday, with many praising her for thinking outside the box.

‘This is so clever! They probably wouldn’t mind [getting] rid of this convenience stock,’ one woman said.

Total savings by shopping at McDonald’s: $16.20

A second said: ‘You cracked the code. This is genius!’

‘You win at markdowns,’ said a third.

Another replied saying the same trick can be used to order McDonald’s burger buns without any filling.

Others said they were impressed with the fast food giant’s affordable prices even without the 40 percent reduction.

Discount codes on the MyMaccas app seem to appear at random, with people reportedly receiving different offers to their friends and partners in the same week.

The Tasmanian mother said this was her second time in a month to be given a 40 percent off code but her husband who also uses the app has never received one.