Shocked mums have shared their disgust on Facebook after running dishwashing tablets through their washing machines revealed hidden dirt and grime in the seemingly ‘clean’ appliances.

The images shared in Australian cleaning group Mums Who Clean show dirty, brown water lurking in the top and front loaders after the washing cycles finished – and in many cases the water changed colour within minutes.

The simple cleaning trick has inspired hundreds of others to clean their own machines – and many have found the exact same result despite regularly ‘cleaning’ them with wipes.

‘Well to say I am disgusted is an understatement,’ one group member wrote.

Over the last couple weeks additional images and videos have emerged online as a result of more people trying out the domestic tip for themselves.

One video shows the clear water turning murky after five minutes into a cycle even though the owner had cleaned the appliance with hot water and vinegar a few weeks prior.

The genius tip of using dishwashing tablets instead of regular detergent helps breaks down small particles and dirt you cannot see as well as lift stains with ease. 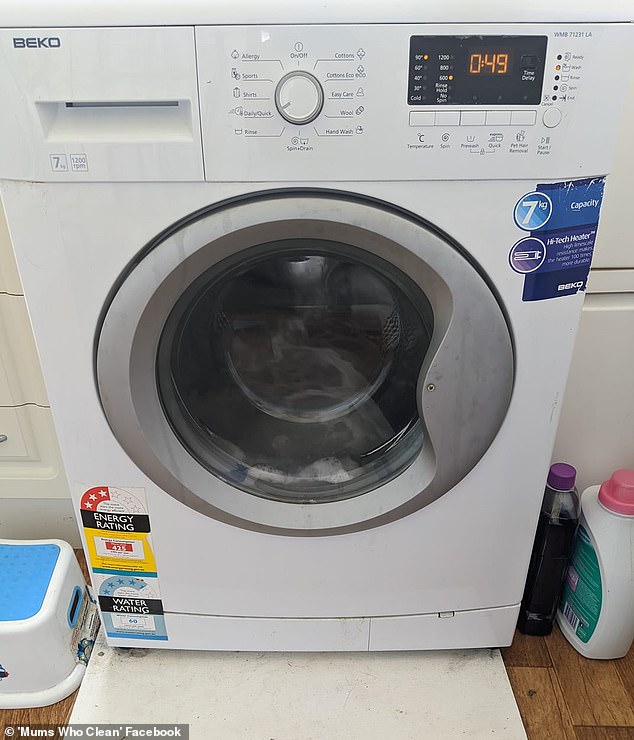 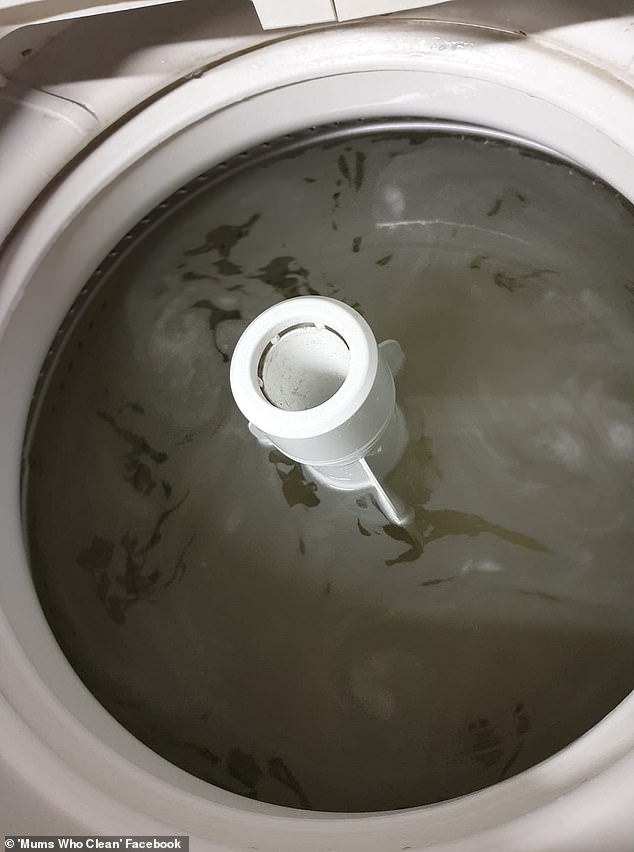 ‘Decided to try the dishwasher tablets to clean my washing machine – I am now mesmerised,’ one Facebook user wrote, shocked at the state of the water

How do dishwashing tablets work?

Phosphates: As one of the main ingredients in dishwashing detergent, phosphates remove calcium deposits and assist in breaking up food stuck to dishes, pots and pans.

Enzymes: These biological catalysts work on the cellular level to break down food deposits and remove oil and grease by loosening proteins and peptides.

After trying the trick for themselves some users have said to put up to four dishwashing tables of any brand straight into the drum and to run the machine on the hottest cycle.

‘Decided to try use dishwasher tablets to clean my washing machine – I am now mesmerised,’ one wrote.

‘I can already see the shine start to come back to the drum,’ one woman wrote, shocked at the state of the water. 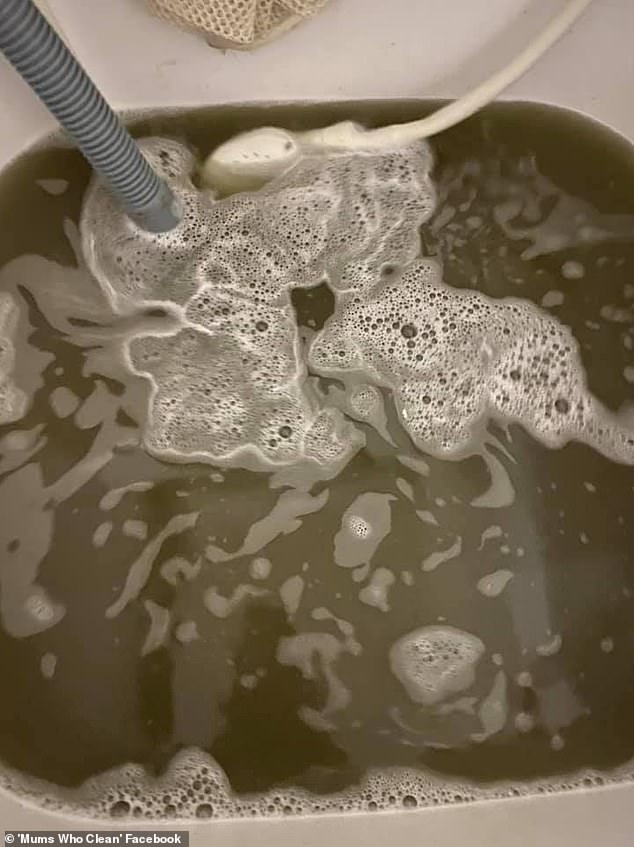 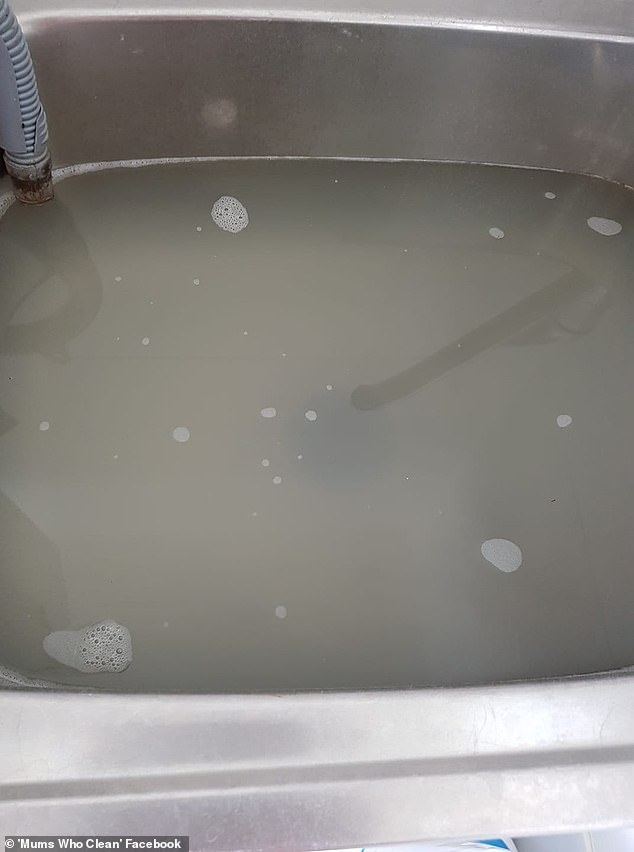 ‘Decided to try the dishwasher tablets to clean my washing machine – I am now mesmerised,’ another user said

Dishwashing tables have also been previously used to remove baked-on grime and grease stained on oven doors, revealed on Facebook by another Australian woman.

The woman said she had tried every product imaginable to clean the dirty kitchen appliance, but nothing seemed to work – until she used a dishwasher tablet and warm water, which stripped the grime almost immediately.

And far from requiring a lengthy cleaning process, the hack requires simply dipping the tablet into a pot of warm water, and then using it to gently rub off all the stains on the door. 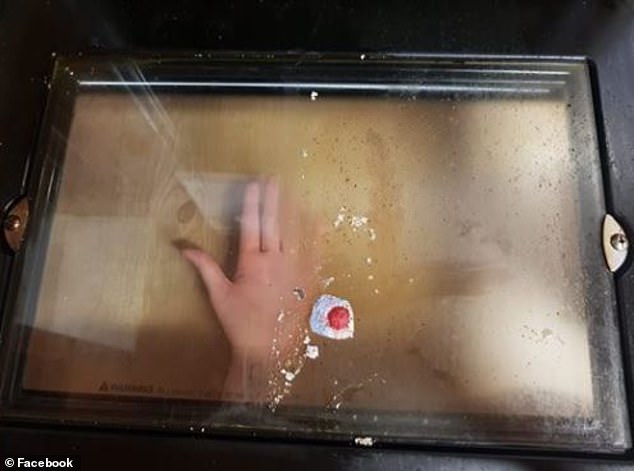 Before: An unnamed mother has revealed a genius method for cleaning oven doors, sharing this photo on Facebook to reveal the stubborn baked-on grime and grease on her appliance 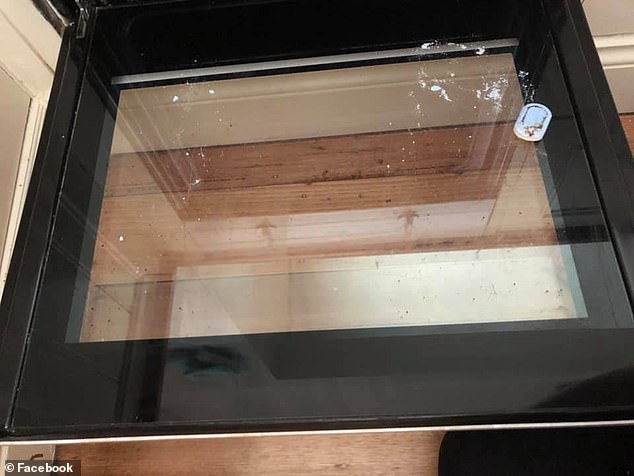 After: The easy process involves dipping the dishwasher tablet into a pot of warm water – and then using it to lightly scrub on the stains until it all rubs off

‘After years of using strong chemicals and a tonne of elbow grease to clean my oven I am amazed that all it takes is a dishwasher tablet, warm water and a light scrub,’ she wrote in the Mums Who Clean Facebook group.

‘I didn’t think it would be that easy.’

The woman was so impressed with the outcome, she decided to share her ‘before’ and after’ pictures to show the results.

In the first image, the woman can be seen rubbing a filthy oven door with a dishwasher tablet, with the semi-dissolved remains of the cleaning product seen on the glass window of the appliance.

The second image then reveals the dramatic transformation of the door, revealing that the once-greasy glass panel had been left completely clean and clear thanks to the sneaky hack. 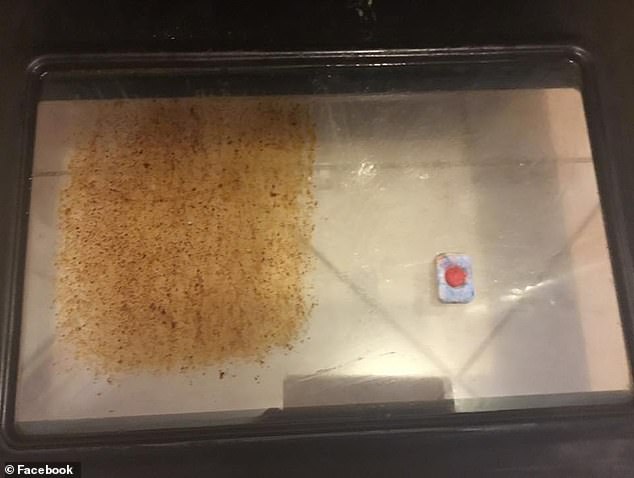 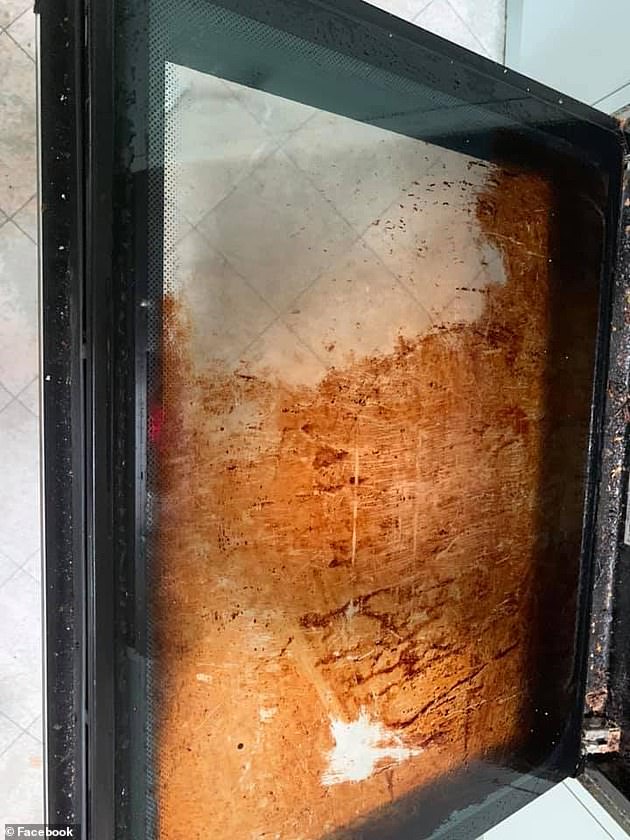 Many people who saw the results were thrilled about trying it out for themselves, while others shared photos of their incredible results.

‘I did mine today too… worked a treat,’ one woman wrote.

Another revealed that she had also previously used dishwasher tablets to remove stubborn food stains from pans and baking dishes.

‘I always use dishwashing tablets if I have food really stuck on a dish,’ she explained.

‘Fill it with hot water and soak overnight. Amazingly clean the next day.’ 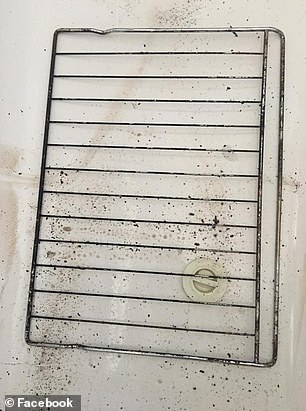 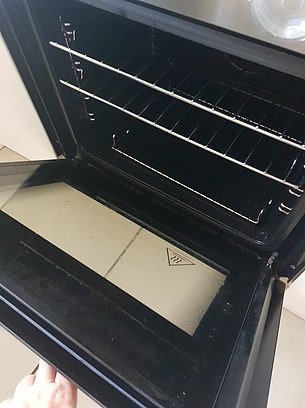 Evidently the humble dishwashing tablet can be used to clean more household appliances other than the dishwasher.

For the oven simply place the tablet inside tinfoil to set off an effective chemical reaction and soak the racks in hot water for two hours.

Whereas for the washing machine place up to four tablets into the drum and rinse on the hottest cycle.