All parents worry about their children, but one mum-to-be has been mocked for enforcing an extremely strict set of rules ahead of her new arrival.

Mumsnet user Frenchwolf86, believed to be from the UK, came under fire after revealing the 13 rules she expects all visitors to follow when they come to meet her newborn baby.

The guidelines include a change of clothes after smoking and even helping out with housework in return for cuddles with the infant.

But the expectant mother has been mocked by other Mumsnet users, who joked that she wouldn’t get many visitors if she enforced the rules.

Frenchwolf86 kicked off the discussion by asking fellow mums if she was being unreasonable for asking people to follow the rules.

She wants prospective visitors to be extra clean, which means washing their hands every time they hold the baby and no visiting if they’ve recently been ill, she explained.

The mum-to-be also stipulated that feeding time is private, the baby needs to sleep only in her crib and she cannot be posted about on social media.

But perhaps the most extreme rule on the list was her request that visitors help with the housework if they come to spend time with the baby. 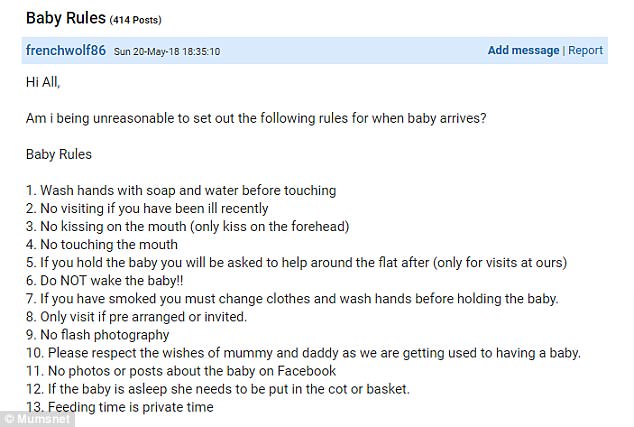 Other Mumsnet users were left in stitches at her diva-like demands, with many saying that the baby must be her first.

One said: ‘Is this for real? I doubt you’ll get any visitors at all if you issue that list of rules! Or is that the idea…? Ah, very clever OP. Keep the in-laws away, eh?’

‘Haha this has made me smile! I don’t think you’ll have many visitors,’ another posted.

A third said: ‘This can’t be real No one is this ridiculous.’ 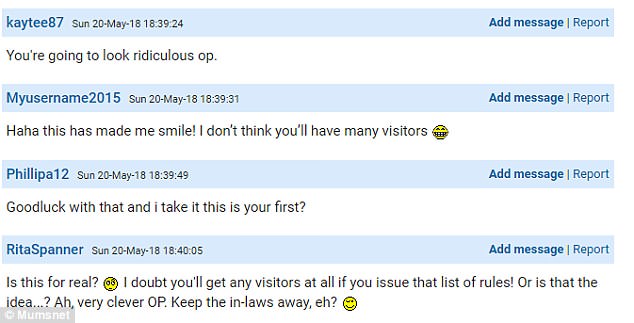 Her rules were mercilessly mocked by most parents on the thread, who said she wouldn’t get many visitors with them

‘Helping around the flat is hilarious! I’d pass on holding the baby!,’ a fourth wrote.

However, others were a little more sympathetic and said her requests were entirely unreasonable.

One posted: ‘I would have thought that that was all common sense when you visit a new born?’

‘Are you feeling quite anxious op? I was terrified before ds (darling son)was born and everybody has their way of trying to alleviate the stress,’ another wrote.

Other parents were more sympathetic, and said the rules were proof that the mum-to-be was feeling anxious about becoming a parent

‘I guess these rules are yours. Try to relax a bit though if you can.’

A third said: ‘I sort of get where you are coming from with some of the rules, but I think it’s a bit excessive. If anyone does anything that bothers you, just ask/ tell them to stop doing it.’

A fourth agreed: ‘None of these (apart from maybe 5, just because of how it’s phrased) are unreasonable but the fact that you feel like you have to set them out in a list like this makes me wonder if you’re dealing with some difficult people in your life.