Mumsnet user hits out against her husband’s ‘work wife’

A jealous woman divided opinion after she slammed her husband’s ‘inappropriate’ relationship with a female colleague.

Taking to Mumsnet, the unnamed woman revealed her partner had ‘gone shopping’ and discussed personal issues with his co-worker, who she described as his ‘work wife’.

‘I hate her also because she has flirted with him on Facebook,’ the woman wrote. ‘He didn’t flirt back but he didn’t exactly tell her to f*** off, either. I am angry at him because even though I’ve told him how she makes me feel, he won’t pull away’.

Mumsnet users were divided over how she should respond to his behaviour, with the majority insisting that she was overreacting.

Frustrated: A wife revealed she was concerned about her husband’s relationship with a female work colleague  (file image) 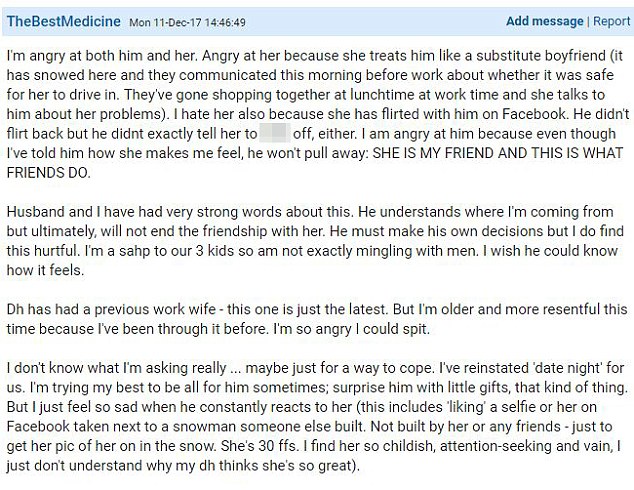 A woman started a debate on Mumsnet after voicing her frustration with her husband’s ‘work wife’.  He claimed his friendship with his colleague is strictly friendship

Many people sympathised with the wife and agreed they wouldn’t feel comfortable with his actions if they were in her position.

One person said: ‘This is absolutely unacceptable and you shouldn’t stand for it’.

Another also wrote: ‘It definitely sounds like it’s crossing the line, and it’s clearly upsetting you. It sounds like it’s painful for you to watch their intimacy like a third wheel. You will have to make an ultimatum’.

Others who also agreed with her right to be angry struggled to see what more she could do.  Many advised monitoring any developments in the relationship between the woman and her husband.

One person said: ‘I understand how you feel but I’m not overly sure what more you can do about it, other than insisting that he addresses the issue ASAP because it’s causing you considerable upset’. 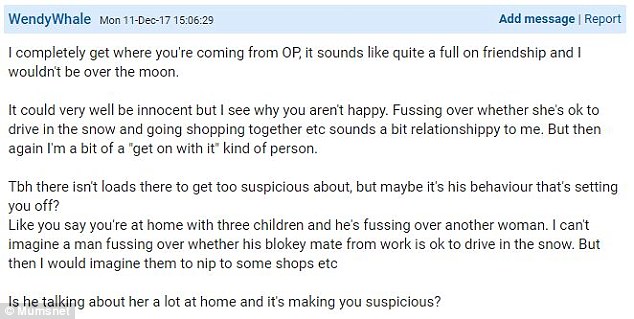 Unconvinced users of Mumsnet suggested the wife was seeing issues with her husband’s friendship because she is too dependent on him.

One person wrote: ‘Maybe now’s the time to think about not being a SAHP [stay at home parent] and having something outside your family?’

‘Being a bit less dependent of your dearest partner for everything? Then this kind of thing wouldn’t seem like such a big deal’.

Another said: ‘Honestly? It sounds like you are resentful of your husband and this is just the way in which it is being expressed. What is your social like like? are you feeling isolate being at home? bored? I know I would be resentful in your shoes.

‘But I do think you are overreacting here. Your feelings are valid though, you should have a proper chat with your husband’.

Others advised the wife to be cautious but also questioned why she felt threatened.

One person said: ‘I don’t want to worry you but what you described sounds very much surrogate spouse/ emotional affair’.

Another wrote: ‘I think the problem comes when your spouse is making more effort with a female friend than his wife. Going shopping on lunch times when he won’t with you, replying to her texts within seconds and yours after a few hours. Only you can decide if that’s happening’.